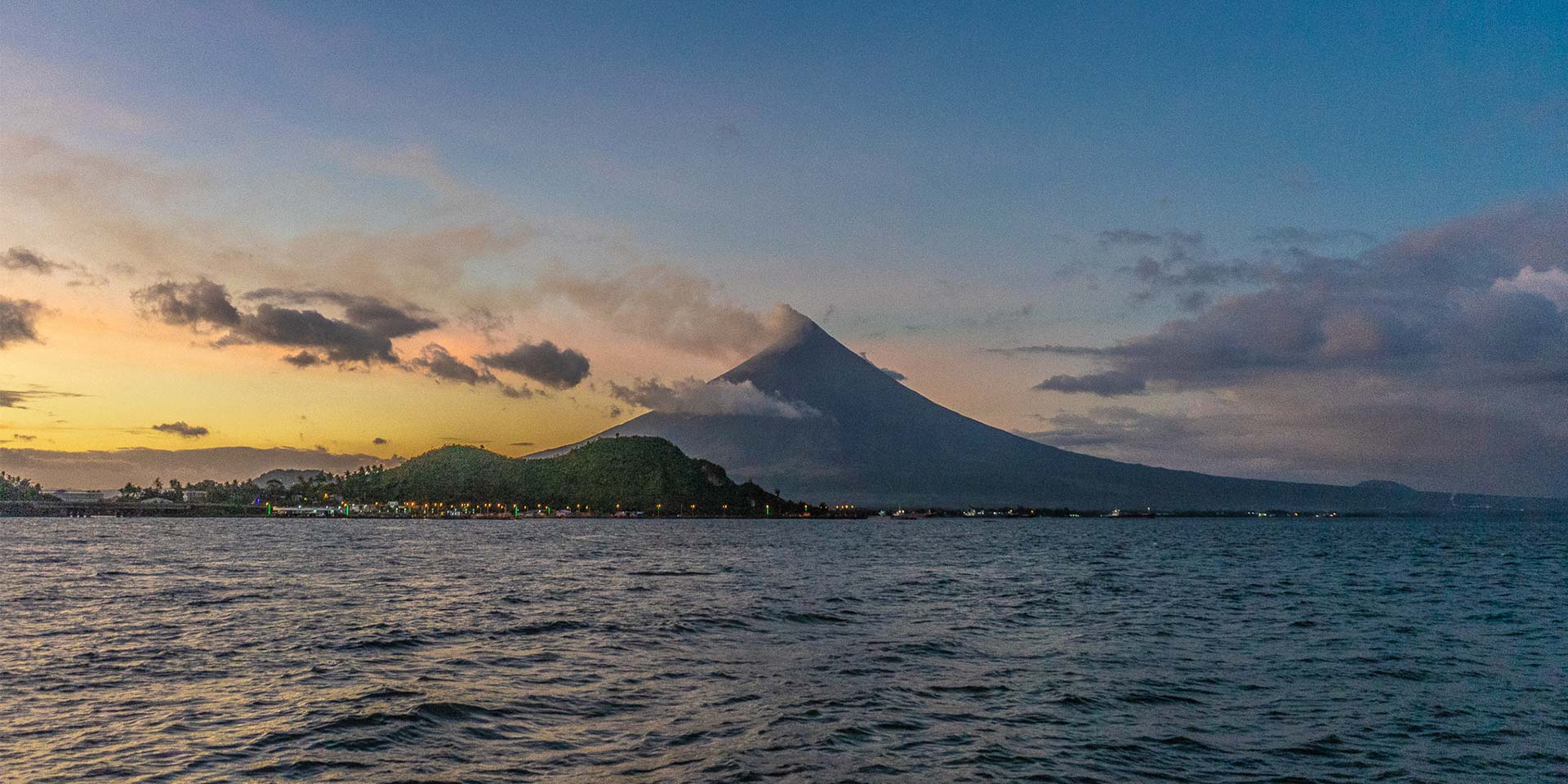 The perfectly conical cone of Mount Mayon rose from the ocean in a blaze of fiery reds and yellows as the sun set over this volcanic peak. Amongst the drifting clouds that clung to the mountain top, wisps of smoke were steadily belching forth from the summit. This was my first glimpse of the Philippines’ most active volcano, a tall, almost perfect cone that towers over the city of Legazpi in southern Luzon. Mount Mayon spurts out constant plumes of ash and smog that drift over the skyline, and every few years, the volcano erupts violently and with little warning.

Living in the Shadow of the Volcano

From afar, the volcano was both intimidating and beautiful. The next day, I would be getting much closer though. I would be riding an all-terrain vehicle over black soil and lava flows as I explored the slopes of Mount Mayon because, in Legazpi, volcanic adventure tourism is very much a booming business.

Despite the inherent danger that such a destructive natural feature presents, tens of thousands live within just a few kilometres of the volcano. Many live on the slopes themselves

“People farm on the mountainside because it’s the best place to grow crops. It’s the most fertile soil in Legazpi. But, if there’s an eruption, 25,000 families have to be evacuated from the slopes,” my guide Liezel, a Legazpi local, tells me.

ABOVE: This was just a volcanic gurgle.

Eruptions happen every few years, with the last occurring as recently as January 2018. For weeks, Mayon spewed lava and ash from its crater, but as far as the mountain’s volcanic history goes, this was just a volcanic gurgle.

Before we venture onto the slopes, Liezel takes me to the Cagsawa Ruins, where I can see firsthand the destructive capabilities of the volcano.

ABOVE: Belfry of the Cagsawa ruins.

“The ruins are the top tourist destination in the province,” Liezel informs me as I stare at the crumbling stone masonry of Cagsawa, while Mount Mayon rises in the background.

“In 1814, one of the strongest eruptions ever recorded destroyed the village of Cagsawa,” Leizel continues. “Thousands were killed and all that was left was the church”.

The belfry of the church still stands to this day, its decrepit walls standing in almost futile contrast to the smoking mountain that lies in the distance.

Cagsawa was never rebuilt, and the ruins are a reminder of the fiery power of Mount Mayon, and the dangers posed by living so close to the volcano.

As minibuses packed with tourists pull up to the car park, I realise that the Cagsawa Ruins are also a reminder that the volcano is a blessing as well as a curse. As well as providing fertile farmland, the volcano is increasingly supplying jobs in the tourism industry. For locals like Liezele, tourism and the volcano are inseparable.

ABOVE: ATV up Mayon.

Explore the Philippines with Remote Lands

Many visitors want to get much closer to the volcano than the Cagsawa Ruins, and adventure tourism is the fastest growing industry in Legazpi. Mount Mayon, despite its regular eruptions, has been turned into a volcanic adventure playground, with opportunities to hike, camp, off-road and even to zip line down the lava-strewn slopes of the active volcano.

Alongside Liezel and a group of intrepid volcano tourists, I set off on an ATV ride that will take me to a black lava flow which hurtled down the mountain in 2006.

The ATVs splash through mud and grass, as we ride along a rough riverbed. The trail is rocky but clearly well worn, and we slowly ascend the slope of the volcano, as the soil turns abruptly from dark brown to pitch black.

After an hour of uphill riding, the forest suddenly begins to thin out, and ahead, I can see the rocky ridge-like shape of the lava flow. At the edge of the lava flow, is an ominous safety warning: ‘In case of Mayon abnormalities – a. Don’t Panic. b. Be calm, carefully go down the lava wall and move to a safer place’.

ABOVE: Walking on lava rocks.

At the base of the lava flow, we dismount and continue on foot. It’s midday, and by now, the summit of Mount Mayon is almost entirely hidden by cloud.

Nad, our local ATV guide, jokes in an affectionate manner that, “She didn’t know you were coming! She’s still sleeping under the clouds!” The affection is warranted, because as Nad says, “The volcano is part of our lives. Some need her for farming. I need her to bring tourists!”

But Nad also knows the dangers of Mount Mayon, and behind his affection, as with most Legazpi locals, there’s a real sense of respect for the danger posed by the unpredictable mountain that overshadows every aspect of their lives.

The lava flow we are standing on was formed when Mount Mayon erupted in 2006 and Nad tells me that “Four tourists who had gone up the mountain, to reach the summit, were killed”.

Nad has seen many eruptions during his life, and he says matter of factly, “Sometimes there is warning, but more often than not, she just erupts”.

While I contemplate the awesome power of the volcano above me, Nad is preparing the zip line, and moments later I’m hurtling from the top of the lava flow and through the trees until I reach the opposite platform.

I wait for the rest of the group to zip line down too before we start our ATV engines and make the return journey to Legazpi. I hope that Mount Mayon is well and truly asleep, at least for now.