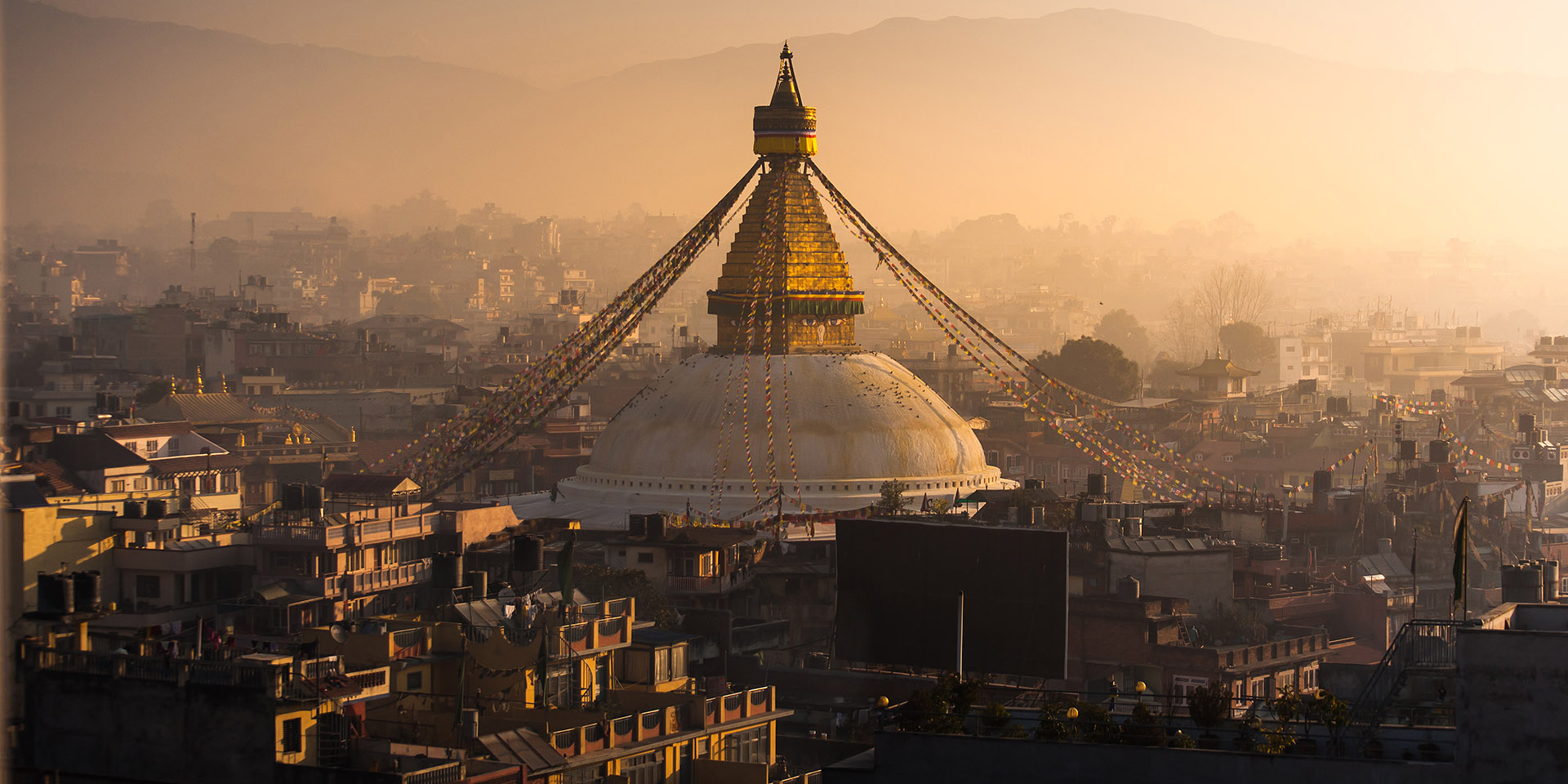 You first encounter Nepal as a postcard: the iconic white peaks of the Himalayan range, cresting through a sheet of clouds. Then, as the plane dips towards the ground, the clouds fall away, and you see it: the city rising around you. It unfolds.

From above, Kathmandu looks less like a national capital and more like suburban sprawl, growing without limit. Instead of gridded city blocks or patches of skyscrapers, you see haphazard arrays of stocky row homes, crowded around each other in patterns of density, punctuated by patches of grass or a government building. It is an overall image of visual noise, evoking the kind of “Magic Eye” poster you see might see in a waiting room: you stare into the static, waiting for the hidden image to emerge. My destination in Nepal was the trail from Lukla to Namche, but as a visitor from the US, Kathmandu would be my gateway, and—as a result—my introduction to the contemporary character of a country so popular for its existence outside of time.

Though I was eager to hike the trails and visit temples, I was equally excited to catch some glimpse of what it is to be a contemporary Nepali. To me this seemed somehow more mysterious than a mountain veiled in clouds or a deity of eroded stone. It is that thing that proves most impossible to bring home in photographs: the experience of another way of life.

While I knew that a brief stay in a luxury resort before a hike wouldn’t give me a privileged insight into the essence of the Nepali identity, I did hope that experiencing Kathmandu firsthand might hint at the forces that influence that identity.< After all, the relationship between a city and its inhabitants is a strange thing. The people are the city; they are its life. And yet, as a physical extension of its people, the city takes on an identity of its own. Its parameters confine and regiment the day-to-day lives of its people. The lay of the roads, the concentration of industries, the angles of the architecture—these factors act on the city’s inhabitants, determining where they go to school, where they work, who they marry, their stress level, their walking speed, and how often they see the sky. Their environment becomes a part of them. The city contains them, and they contain the city.

After landing, my traveling companions and I met our guide and driver for our forty-five minute transfer to Gokarna Forest Resort, in the lush hills outside the city proper.

Along the way, we cruised through narrow streets in our Toyota Hiace, brushing past mopeds and pint-sized pick-up trucks, packed with passengers. Outside our window, bundles of power lines hummed, their black cables wending through the air only seven feet off the ground, twisting in tangles around each other and terminating in great bundled hoops.  Locals idled in open storefronts, overflowing with a mixture of Indian and Chinese conveniences and flavors. Kathmandu is a patchwork city. Due to the seismic activity caused by the growth of the Himalayan range, few Nepali homes meet the legal requirements to extend higher than four stories, and they all seem to follow the same basic design: a square foundation and a colorful facade, featuring a grid of front windows and a few decks, topped by a flat roof, everything but the front left windowless and unadorned. Each appears to be designed as a unit to be slotted into a row of houses, and yet they face in all directions, spaced without any plan in mind. As a result, Kathmandu seems built from an implied chaos, feeling both cramped and spacious.

“They didn’t think it through,” Raz, our guide, said as we rumbled along a lonely dirt road on an otherwise bare hill. “This road may never be completed.”

We passed by a claustrophobic clutch of houses, huddled together with their backs exposed, surrounded by empty lots. I asked Raz where these houses come from: who buys them from whom and why they’re built so arbitrarily. And Raz explained something I’ve come to call “The Nepali Dream.” It goes like this: A man comes of age; he marries; he has his children. But he is poor—a relatively poor man in a relatively poor country. Perhaps he lives in one of the many small villages where electricity and tap water are far from guaranteed and gainful employment even less so. So, this man sets out to make his fortune.

He takes a menial job in India or a gulf country (long-haul trucking, working construction, quarrying, etc.). He works himself to the bone each day, and while he works, he earns and he saves and he sends back to his family wages almost completely inaccessible to him in Nepal. These jobs range from the sort of humane but unglamorous labor of a first world country to exploitation on the level of indentured servitude. In either case, after two to five years, he has put in his time and saved enough that he can return to Nepal, buy a plot of land, build a four-story apartment building, rent it to tenants and—one hopes—have enough money to support his child’s private schooling and maintain a reasonably comfortable lifestyle for his wife and himself.

I looked out the window, realizing that each of those houses was someone’s hope for themselves and their children, something they had worked towards with everything they had. I stared out the window at the fleeting facades and thought about a city of thousands of individual homes; each facing their own direction; each containing individual families from different castes, religions, and ethnic groups; their own hopes and desires in mind; living in each other’s dreams; and always reaching.