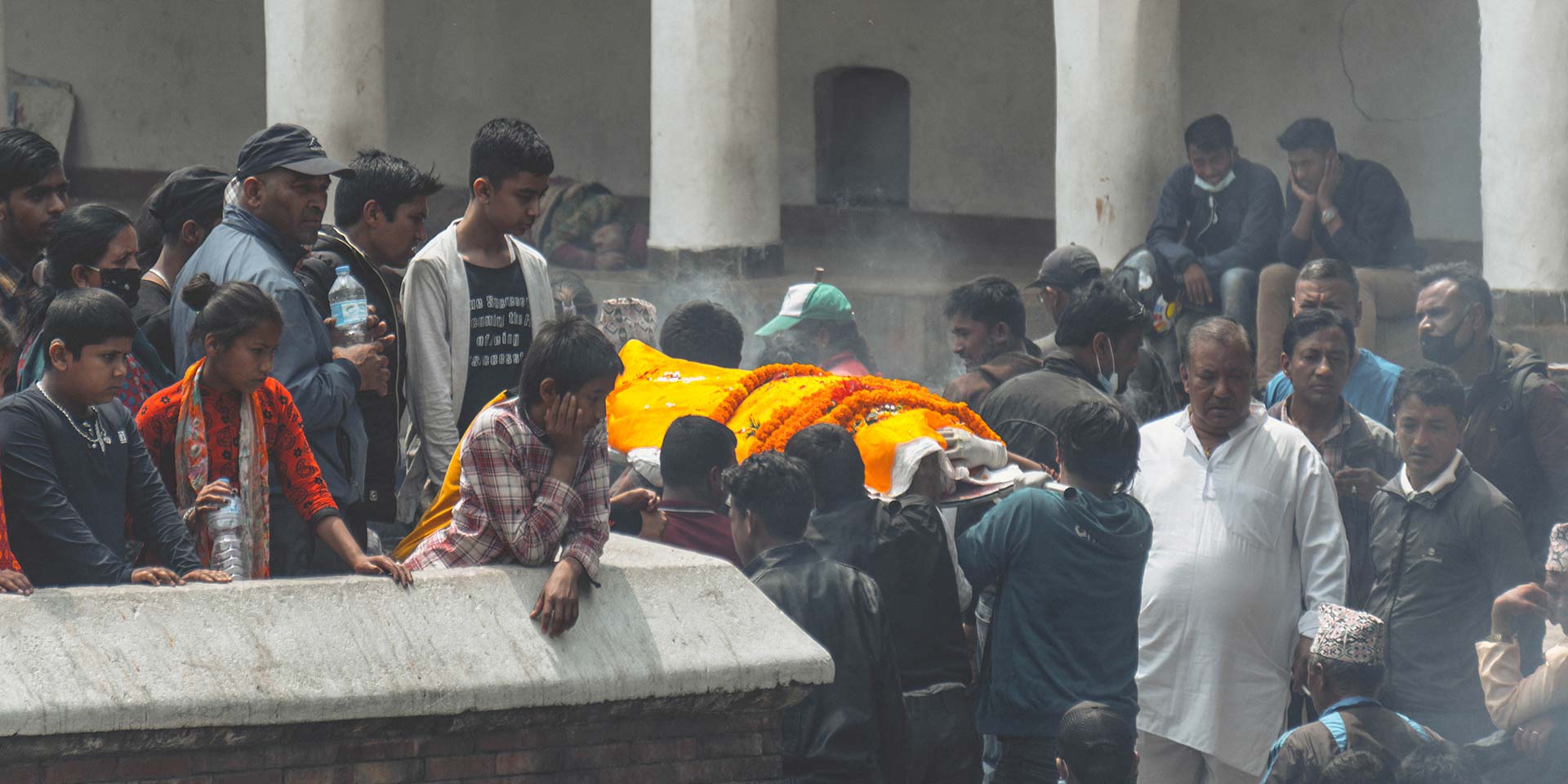 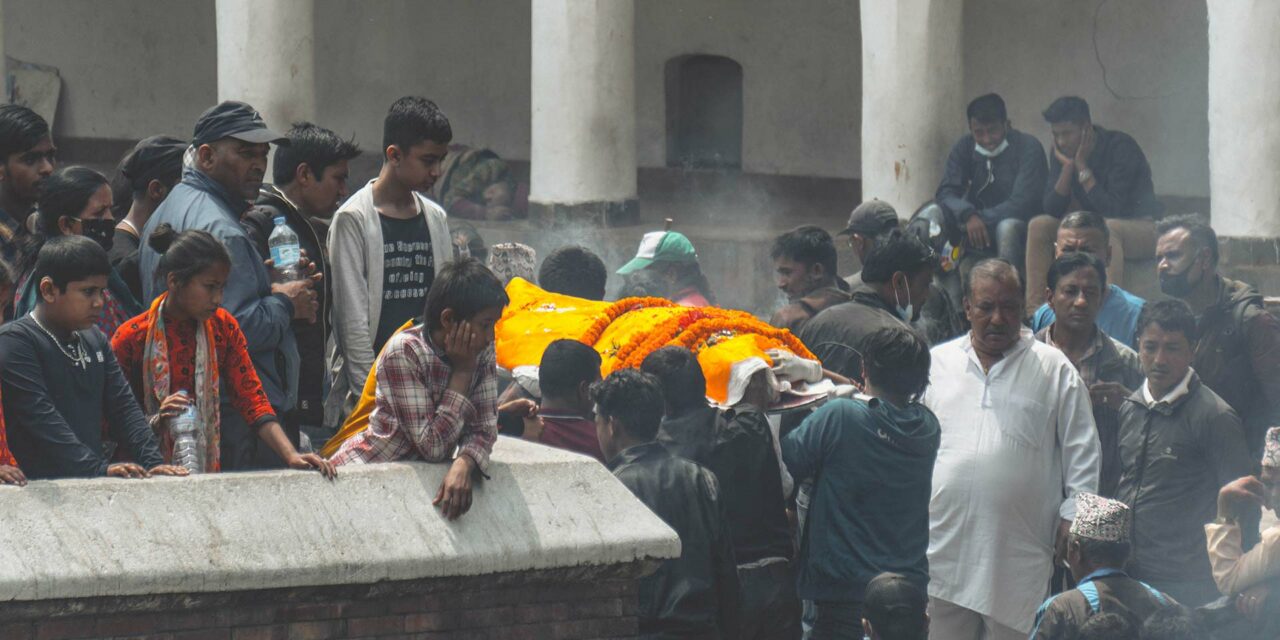 Shree Pashupatinath, or Pashupatinath Temple, can — especially around major holidays — take on a carnival atmosphere: balloons, stalls, food on sticks, and waifish, stoned sadhus charging for a photo and the promise of good fortune. On my first visit during Nepalese New Year, a dreadlocked foreigner in elephant pants tapped me on the shoulder: “Is this where they burn people?”

“The body is nothing. Nothing inside. So we come here, and we burn it. Burn it fast.”

At Shree Pashupatinath, some come to enjoy the Hindu-only temple, some the art, murals, and architecture, others to make money off of tourists. To many, however, this temple is known for those who burn their dead and mourn in full view of locals and tourists.

Shree Pashupatinath is the oldest Hindu temple complex in Nepal, but despite that fulsome claim, no one really knows when it was built. Heritage says 300 BCE, but its first chronicled mention is the eighth century, and the main temple’s present form only came into being in the seventeenth century.

Regardless, this is the auspicious crematorium of many who die in Kathmandu. Much like its original building date, debate surrounds whence Nepal’s national temple came to be. One legend says a cow herd dug deep on this spot after seeing one of his cows showering the earth with milk, discovering the Sivalinga of Pashupatinath. Another legend says it was erected by Jayadeva XI. The name itself comes from incarnation of the god Shiva, who spent time in the Kathmandu Valley as a deer, and whose horn is the basis for the Sivalinga; having spent so much time as an animal, this incarnation is Pashupati, Lord of Animals — hence Pashupatinath.

ABOVE: Marigolds and cremation at Shree Pashupatinath.

The “Lord of Animals” temple itself hosts a bit of wildlife, particularly monkeys and dogs. Both pick through the water of the Bagmati for food downstream and in the midst of Shree Pashupatinath. To regular travelers to India and Southeast Asia, these adorable but quarrelsome creatures will be nothing new. They are there for the food and waste discarded by visitors and pilgrims, though my guide suggests laughing that they may also be there to eat human carrion.

The dogs and monkeys are not the only beings sorting through the water for their next meal. People too wade into the Bagmati to look for goods they can sell. The bodies that are burned here are burned in finery: rings, necklaces, pins, and brooches. To the indigent who use the eastern “untouchable” crematoria area as shelter, these are valuable spoils indeed. They wade knee-deep unceremoniously grabbing the Bagmati mud as bodies burn not 15 feet away.

Lens on Sadhus From Kathmandu to Varanasi

“To we Hindus,” my guide Nitesh says, “the body is nothing. Nothing inside. So we come here, and we burn it. Burn it fast.”

Many of the dead come straight from hospitals, sometimes in ambulances. And while the Hindu belief in the irrelevance of the human form after death is apparent in words, in deed it is another matter. Great care is taken with the last rites of a body here, but as in the case with most funerary rites the world over, these are for the living, not the dead.

When a body comes in to Shree Pashupatinath — depending on prior arrangements, fees, and “abolished” caste — they are brought to the Bagmati river by the northern area near the bridge. In this case, the deceased is covered with a plastic sheet and accompanied by personnel in white gloves. Mourning is held in full view of the temple-goers. Some scream and lament. My guide points to a particularly loud mourner and says, “Maybe he is paid.” He goes on to explain that some wealthy families pay professional mourners to lament their dead loved ones.

ABOVE: Caring for and washing the dead at Shree Pashupatinath.

This person however, quite old by the looks of his dead, rice-spattered face, was well beloved. Three dozen gather around the body as it receives its final rites. The dead’s naked feet are washed in the odorous, green waters of the Bagmati. Rice is sprinkled and marigolds are laid on their bare faces. Closer relatives stand nearer to the waters as they bid farewell. Those being cremated at this end of Pashupatinath are the well off. Similar cremations are held south on the Bagmati and the poor take shelter there from the frequent rains.

Slowly, the body is given a more flamboyant exit. The corpse entered quite medically, but it exits shrowded in the bright, shiny orange of a satin cloth draped over the body. Chains of marigolds are draped over the deceased as it is borne aloft by mourners. Some walk ahead of the body crying.

From here the body is taken out of site of the Arya Ghat where it is prepared by close family to be burned.

Travelers will likely see the end product of these efforts throughout their visit to Shree Pashupatinath. A stretcher is built from simple bamboo or light wood onto which to lay the body. Then the wood, which can be quite expensive in many cases, is laid beneath the body to build a type of foot-tall bed for the body. Easy burning chaff is put on the keep the flames alight. Service personnel and sometimes relatives of the dead lay on the chaff to keep the fires burning in a process that can take more than four hours.

Bit by bit, the black soot left by the body is swept into the Bagmati as monkeys splash and search in the low, sacred waters that will lead all the way from these foothills of the Himalayas to the Ganges all the way to the Bay of Bengal.

ABOVE: Visitors look on as a man sifts through the water for treasures left by the dead.

The crematoria is only one facet of the great Shree Pashupatinath — though to tourists for the near future it will always be known as the place where they “burn people” in Kathmandu. This is, however, a temple complex of great interest and renown. One might easily write an entire book on the sites of more than 500 temples and monuments; the main temple complex and the sanctum sanctorum’s Mukhalinga survived the heartbreaking 2015 earthquake.

One particularly interesting architectural asset (or rather lines of them) comes in the form of a line of lingam. This Shaivism-style lingam features a row of rounded, conical protrusions inside a line of stone in the style of a votive temple; in short it is a row of sculptures so long it produces a mirror-on-mirror style effect for photography enthusiasts.

More modern artworks can be found throughout, including one wall surrounded by modern-style murals that might even be called graffiti. Higher on the hill, even on busy holidays, things are calmer. More empty, soulful, and quiet, the area is full of well worn grass, little-attended temples, monkeys, and, of course, sadhus.

ABOVE: Sadhu in Shree Pashupatinath.

Kathmandu Culture Trail to the Heights of Jomsom

Mountains, Rivers and Jungles of Nepal

One of the boogeyman stories to tell tourists is the tale of the aghori baba, a cannibalistic sadhu that subsists on the flesh of the dead as well as their own flesh. This particular story happens to be true — just not at Pashupatinath. The aghori baba, though often exaggerated, are particularly revered but travelers are more likely to spot them on the ghats of Varanasi than Kathmandu. Quite a few years ago, Pashupatinath did have its very own aghori baba, but none make that claim today.

Beyond the northern edge of the ghat and the cremation area, the sadhus live in the rock wall rounding the river; these aesthetics add color to one of the most sacred sites in all of Nepal. They don’t eat human flesh, but they’ll take as big a bite out of your wallet as they can. For money, the sadhus will bless anyone. One of the three regulars put a rice grain sindoor on my head and draped his dreadlocks around me for a photo.

The dreadlocked sadhu promised me a good and happy life for my entire future. I politely informed him that it was a lost cause and asked if he could do anything about my past, which was a real mess. Like much of the temple itself, this was lost in translation.