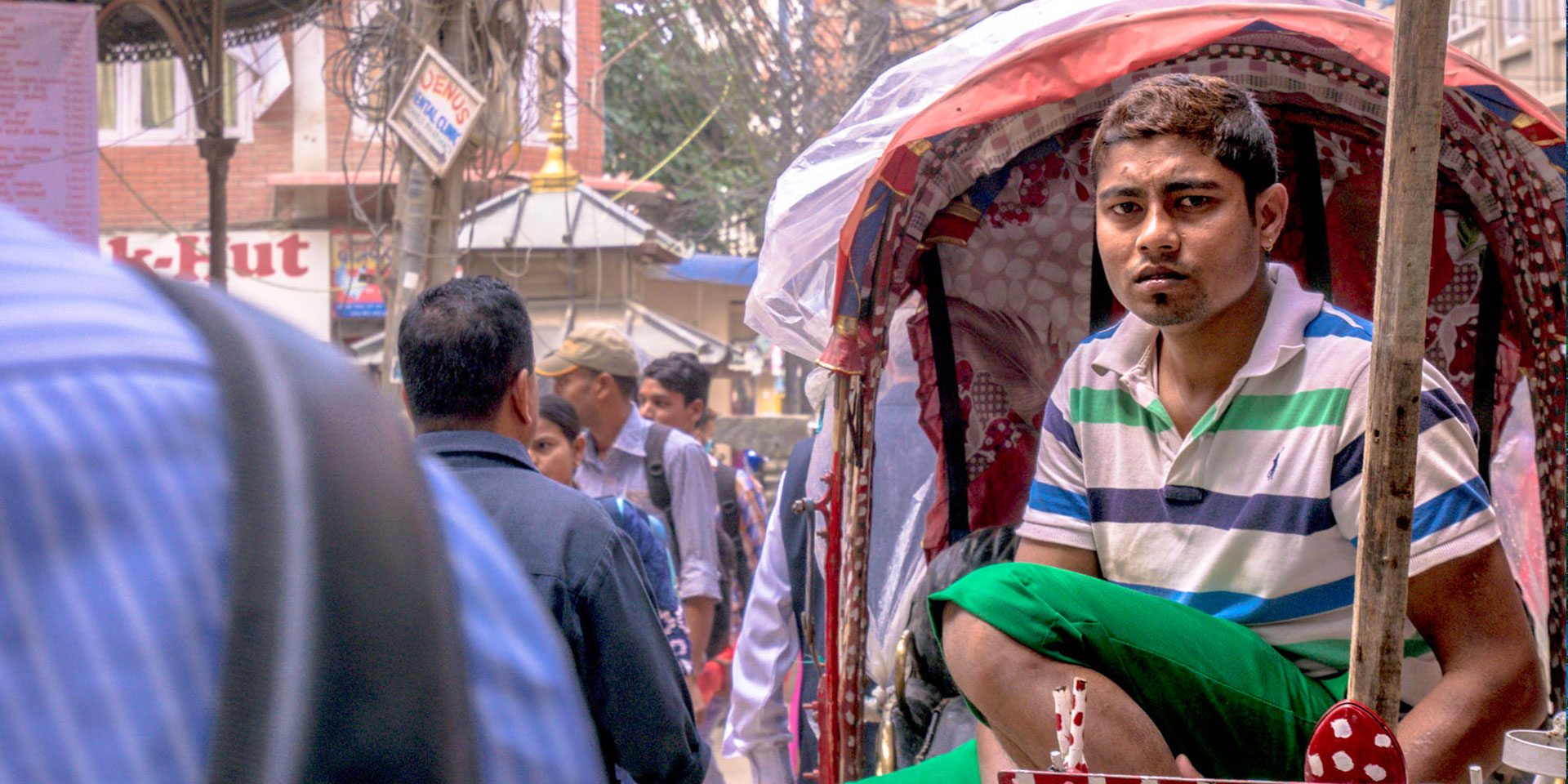 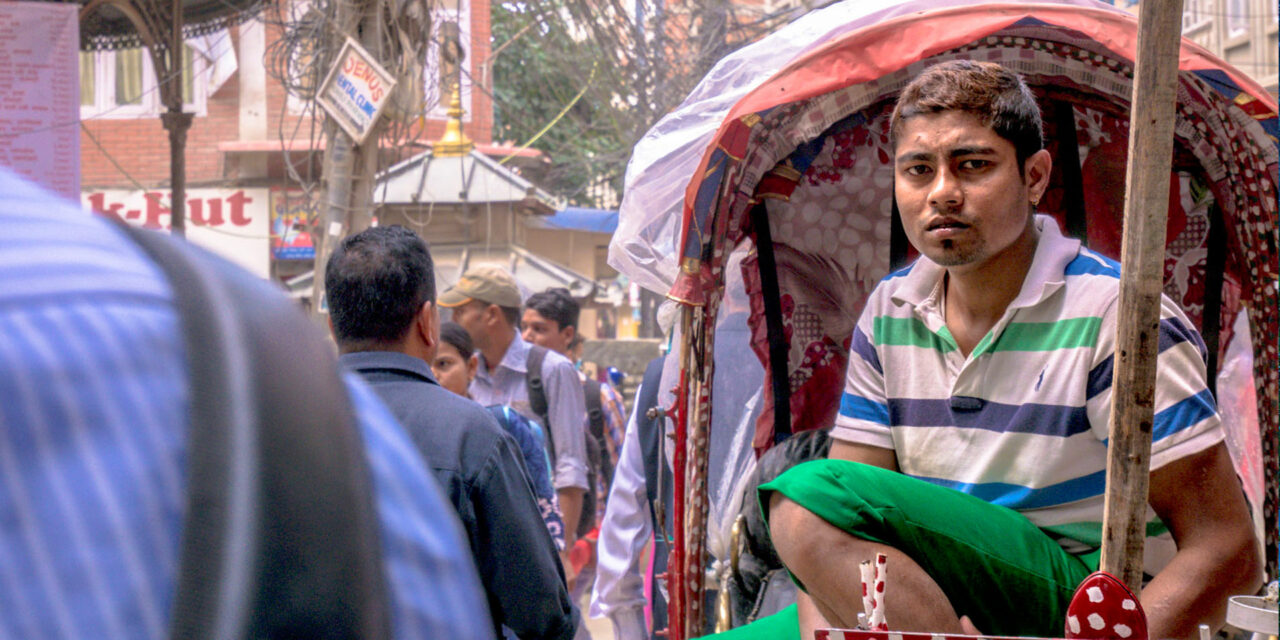 Kathmandu, the capital of Nepal, is a colorful and chaotic city with a spiritual veil of mystique. Known as Yei to the locals and Yeṃ Deśa to the indigenous Newar culture, since the city’s founding it has been an important junction on the India-Tibet trade route, which gives the city its vibrant Hindu and Buddhist traditions. With colorful prayer flags, ancient temples, and busy streets, Kathmandu makes for an incredible journey through the lens.

“Many tourists canceled their trip to Nepal after the earthquake. In 2017, we managed to gain 40 percent back,” says Nabaraj Mainali, who works in Nepal’s tourism industry and has seen the effects firsthand. “To visit Nepal is the best thing to Nepal now, instead of giving money. The international media, right after [the earthquake], only showed the damaged temples and monuments. But it hasn’t damaged that much. Ten to 15 percent is gone, but there is still plenty to see. […] A few temples have already [been] rebuilt and renovated.”

One of the restored temples is the Swayambhunath Stupa, which is often referred to as the Monkey Temple and arguably one of the most famous stupas in Kathmandu. Located atop a hill, it boasts a stunning vista of the city. Believed to be founded in 5th century BCE, it is one of the oldest temples in the country.

ABOVE: Boudhanath, the largest rounded stupa in Nepal.

The nickname “Monkey Temple” is derived from the population of monkeys that live around the area, which, according to legend, were formed by the Bodhisattva Manjushri’s head lice. Naturally, this is a great place to watch the sunset and take in the view of the city.

The only contender for Swayambhunath Stupa’s status is the Boudhanath. “Boudhanath is the largest spherical Buddhist stupa in Nepal and is my favorite site in Kathmandu,” says blogger Kathleen from Kat Pegi Mana; she visited Nepal in 2017 and fell in love with Boudhanath. “I love Boudhanath especially in the evenings, when scores of Tibetan monks and devotees chant mantras and spin the prayer wheels while [they] circumambulate around the walls of the stupa. The atmosphere is truly magical and mystical.”

ABOVE: Images from the streets of Kathmandu.

Believed to be built around the 7th century, the Boudhanath is now surrounded by buildings, forming a compound of its own. The surrounding buildings are home to a vibrant community of restaurants, painting workshops, and gompas. It was damaged during the 2015 earthquake but is now completely restored.

There are many more stupas scattered around the city untouched by the earthquake, nestled in backstreets and hidden courtyards that branch out from the busy streets. “Historically, buildings tend to form clusters around a central courtyard or square, where stupas or temples are built,” says Kanti, a local who works at Backstreet Academy. “The doors of the old buildings are built low so people have to bow to enter as a sign of respect.” These compounds and low-door shops offer glimpses of the daily life of Kathmandu citizens, a slice of calm sheltered from the busy streets.

With 1.3 million living in the center and 5 million in the whole metropolis, there is nowhere better for street photography than Kathmandu. Thamel, for example, is an ideal place to people watch. The area became popular with hippies setting up their base here in the 60s and 70s. With prayer flags hanging above the street alongside tangled electric cables and rickshaws breezing past in narrow lanes, the tourist hotspot is still home to many locals.

ABOVE: Patan Durbar Square in Kathmandu.

Another great place to learn about Kathmandu’s history is Patan Durbar Square, the royal square. Though it too suffered damage from the 2015 earthquake, it is still the heart of the city. Alex Waltner, who works with Swedish travel interest Swedish Nomad, lives nearby. “Patan Durbar Square is one of the most interesting areas in Kathmandu, filled with history and important temples. […] Some of the biggest attractions here include the Royal Palace and The Golden Temple. The Patan Durbar Square is characterized by the Newar architecture, belonging to the Newa people.”

ABOVE: Sadu in the Pashupatinath Temple.

KATHMANDU CULTURE TRAIL: TO THE HEIGHTS OF JOMSOM

FOLLOWING BUDDHA’S FOOTSTEPS ACROSS THE HIMALAYAS

It is one of the two main areas where Sadhu, Hindu holy men, are often found. The other is the Pashupatinath Temple, the cremation temple. While tourists flock here to witness the funeral rituals first hand, there are also locals milling around, often striking up a conversation with visitors. With over 518 structures inside, it was declared a UNESCO World Heritage Site in 1979.

The best view is across the Bagmati River on the hill, where you can observe the ceremonies from afar. However, if you plan on taking photo of a Sadhu, be prepared to pay for it.

“I was last in Kathmandu a month before the earthquake and I still think about the city to this day. Nowhere has left its mark on me quite like Kathmandu,” says travel writer Megan Starr. “My favorite memory from traveling came from at the top of the Monkey Temple at a cafe called Nirvana where I drank an Everest beer and watched over the city, feeling humbled with every sip and knowing that Kathmandu is truly one of the greatest places on earth.”

Everyone has their own special slice of Kathmandu. That’s what makes it such a diverse and photogenic city.