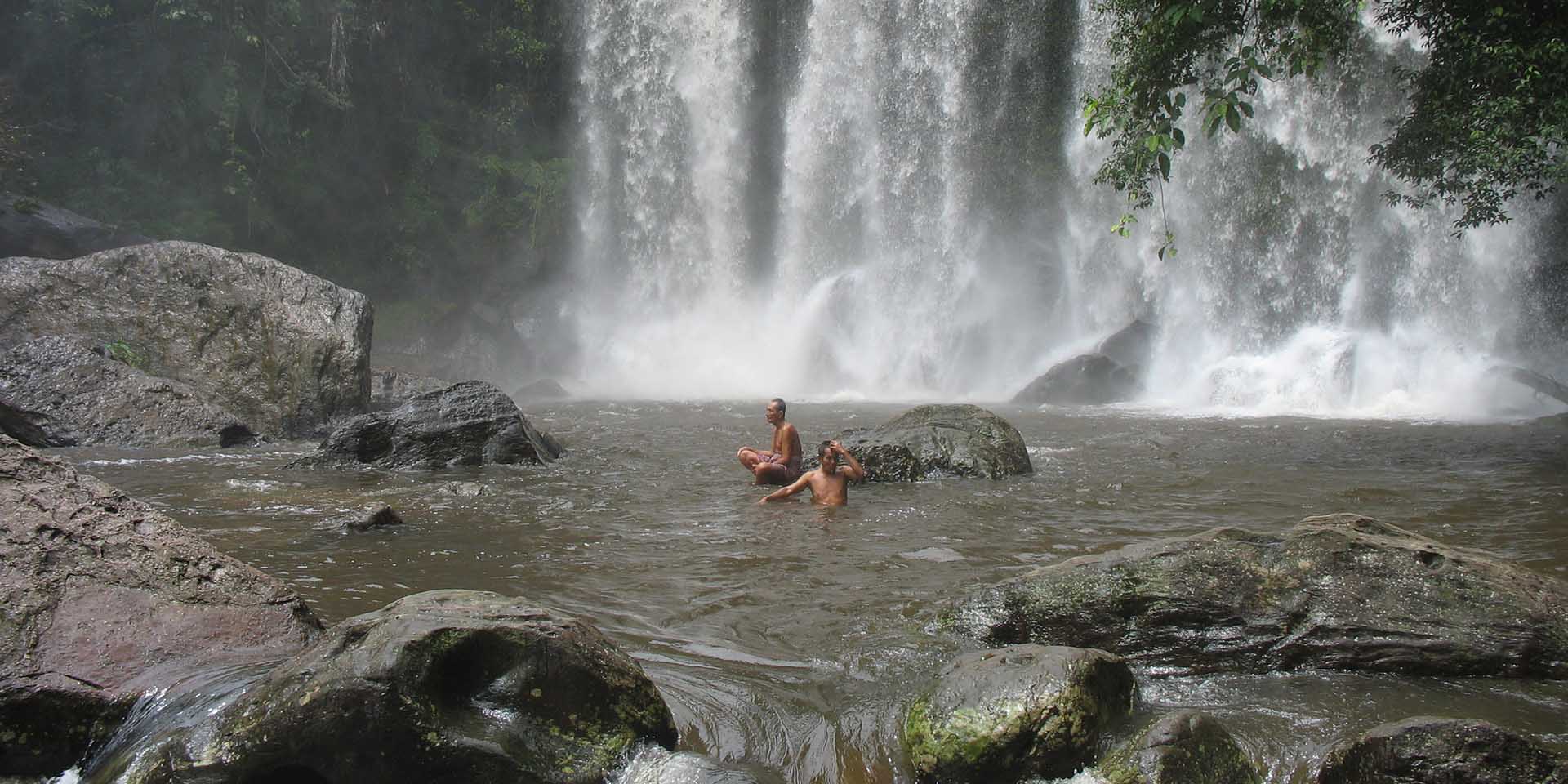 Situated about two hours north of Siem Reap, Phnom Kulen is a worthy full-day excursion away from the crowds at the most famous Khmer temples of Angkor. The name Phnom Kulen can refer to both the mountain ridge itself and the the national park which is designated to the area. This is one of the most historically significant places in Cambodia. The ruins on the mountain are of the ancient capital Mahendraparvata, established by Jayavarman II. This mountaintop is where he proclaimed himself the King of Kings and founded the Khmer Empire by declaring independence from Java. You can literally stand on the site where one of the most powerful empires of all time was born.

My day trip to Phnom Kulen was a long and busy day, but we were able to fit in all of the sites that we wanted to see. With a decent pace, you should be able to cover all of the highlights.

We departed our hotel in Siem Reap at 08:30 to begin the drive north. Along the way, the view consisted mostly of farmland with small mountains in the distance and the occasional  road construction crew to slow us down just a little bit – road construction here seems to be perpetual. You arrive at the end of the paved road at the base of the mountain after about an hour. Then it is a slow, winding drive up a pretty rough road. The road is too narrow to allow two-way traffic, so vehicles are only allowed to go up before noon and only allowed to come down after.

Once to the top, we switched from the comfort of our SUV to riding pillion on the back of motorbikes. Most of the sites in Phnom Kulen are only accessible by foot or bike. The rough road up the mountain was a delight compared to the bouncing around that came with riding on the back of these bikes, but it was fun.

Our first stop was at a well-camouflaged cave, inside of which are several shrines. The cave is home to thousands of bats as well as several Buddhist monks who sleep in tents deep inside. The moss-covered entrance gives way to narrow passageways which open into several larger chambers. You can walk pretty far into the cave, which requires you to duck under the low ceiling in some places.

There is no water at what is known as the Elephant Pond, but there are indeed elephants. Massive, monolithic, beautiful, moss-covered elephants. There is no spectacle made of the site, and this actually made it special for me. The impressive statues are well over 1,000 years old and you can walk among them alone in the forest like you just discovered them.

Kbal Spean – The River of a Thousand Lingas

Travelling throughout Southeast Asia, you are guaranteed to see plenty of carvings, many of which are very nice and impressive. Kbal Spean, however, is certain to be one of the more curious reliefs you will see. The River of a Thousand Lingas, as it is known, is a collection of phallic symbols carved into the sandstone of a riverbed. The linga is an iconic representation of the Hindu deity Shiva, and the water that flows over these lingas is sanctified and regarded as having special power.

We took our break for lunch at a rest area just beside the river, downstream from the lingas and just above the waterfalls. There were many Cambodian visitors here, but we did not see a single foreign tourist. There were children playing in the water, jumping from the bridge and locals simply enjoying themselves and their surroundings. After lunch, we wandered downhill from the rest area to see the first, higher tier of the waterfall. Pretty cool, but nothing remarkable. However, a 15-minute walk down a steep metal staircase brought us to the remarkable 60-foot high falls. As this is the same water that flows over the lingas upriver, it is regarded as holy water, and visitors can take a dip in the pool as the base of the waterfall.

Not too far from the falls is Preah Ang Thom, a 60-foot long reclining Buddha carved into the precipice of a small mountain. The summit offers a nice view of the surrounding forest. The 16th-century Buddha is painted hold and housed in a wooden structure.

Every first-time visitor to Siem Reap is pretty much obliged to see the remarkable ruins of Angkor Wat, Angkor Thom, and Ta Phrom, which will take an entire day of exploration. I think that anyone with two days or more in Siem Reap should consider spending a long day exploring the wild and relatively remote gems of Phnom Kulen. Do know, however, that you will not see Tomb Raider-esque temples like you will in Siem Reap. Much of the value here comes from appreciation of the historical importance and the potential of what remains to be discovered.