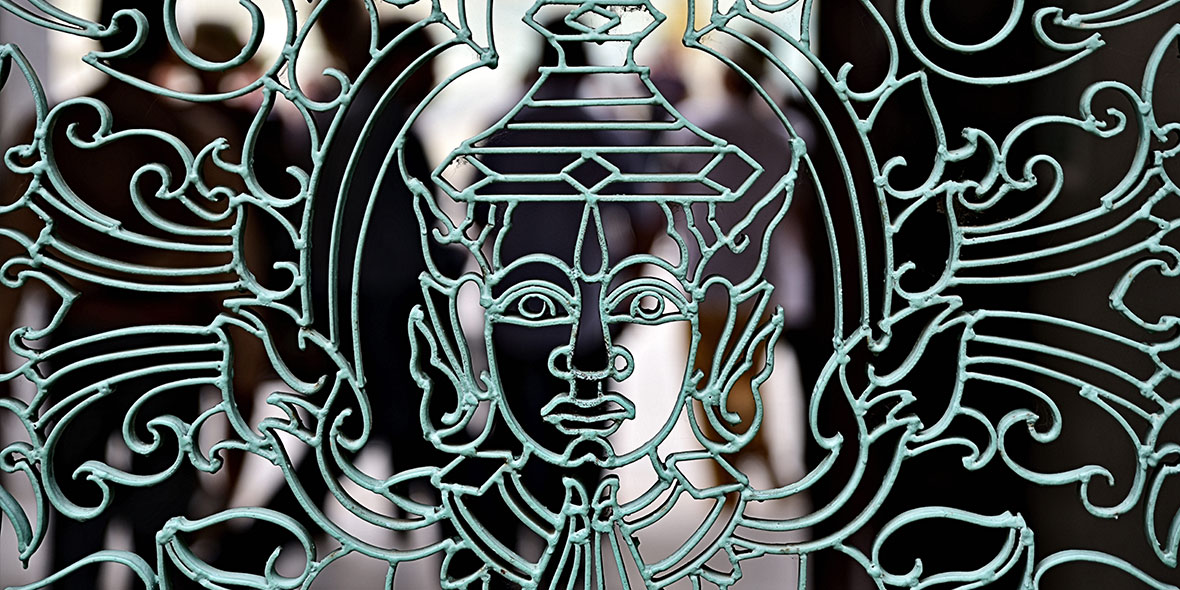 It is 6:15am and the considerable collective energy of the city of Phnom Penh has not yet unfurled. My surroundings look and feel drastically different than the last time I was here when the sun had just set and crowds and noise abounded. Music blared, kids hollered, and vendors loudly hawked their wares. By comparison, this current peaceful moment is perfect for absorbing the majesty of Phnom Penh’s Royal Palace.

This sprawling royal complex is one of the finest examples of modern Khmer architecture on the planet. Standing in Royal Palace Park, which gets so congested in the evenings, the soft morning light bounces off the gilded spire of Preah Tineang Chanchhaya.

ABOVE: The Throne Hall spire in Phnom Penh.

This ornate pavilion is the main building people see when they look toward the palace from Sisowath Quay, the busiest riverfront promenade in the city. Also known as the Moonlight Pavilion, it often has been used as a venue for public addresses by the King of Cambodia and also for State functions. Although the Royal Palace was built in the 1860s, when Phnom Penh became the capital of Cambodia, this pavilion dates back only about 100 years. At that time it was constructed as a sturdier replica of the original wooden pavilion.

Directly south of the pavilion is the grand Victory Gate. With a cream-and-white stone arch, offset by the light blue metal gate, this attractive entrance was designed to be used only by the King and Queen. These days it’s also an access point for VIPs. It is through the gate’s decorative latticework that I get my first glimpse at the meticulously-maintained grounds of the palace and spot the monumental Throne Hall. The hub of this royal complex, the Throne Hall is topped by a 59-metre high tower which, for a long time, made it the tallest structure in Phnom Penh.

This is the building which I most look forward to visiting when I finally enter the palace mid-morning. It, too, is a replica of an earlier structure, the wooden palace built for King Norodom, who moved the Cambodian capital from Oudong to Phnom Penh. It’s steep, multi-tiered orange and green roof is decorated with statues of Khmer deities. Down below, the main staircase to the hall is guarded by statues of lions and a seven-headed Naga, a serpent figure which is commonly depicted at the entrance to temples in Cambodia. Continuing this theme of legendary creatures, the veranda at the top of this staircase is embellished by a series of Kruths, the part-human, part-bird figure from Buddhist mythology.

ABOVE: Both buildings are tremendous examples of the opulence of Khmer architecture.

Angkor Alternatives: Khmer Temples Away from the Crowds

The hall is a suitably commanding building given its primary uses as a site for royal ceremonies such as coronations, and for royal meetings with visiting dignitaries. It houses three royal thrones, as well as large sculptures of six members of Cambodian royalty. Along with the Moonlight Pavilion, it was erected at the request of King Sisowath, who reigned from 1904 to 1927. Both buildings are tremendous examples of the opulence of Khmer architecture.

From the veranda of the hall I notice a structure which is entirely incongruous with its surroundings. This French villa was gifted to King Norodom in 1869 by French Emperor Napoleon III. That villa is surrounded by the Preah Reach administrative offices, the Bronze Palace where royal effects are displayed, the Phochani Pavilion used for royal receptions, and the entrance to the extraordinary religious complex on the south side of the palace compound.

A Journey to Cambodia

After being beguiled by the majestic Throne Hall I was equally awed by the Silver Pagoda inside this religious complex. It is also called the Temple of the Emerald Buddha and both of these monikers are instructive. Built in 1962 by King Sihanouk, its interior is decorated by more than 5,000 floor tiles made of silver. The Pagoda houses an incredible emerald Buddha statue which is made from Baccarat crystal and gold, and encrusted with more than 9,000 diamonds.

Around the pagoda is a belfry, an imposing statue of King Norodom, a library of Buddhist texts, a stupa to commemorate the daughter of King Sihanouk and a model of Angkor Wat, the renowned Khmer temple complex near Siem Reap. It was at or near Angkor Wat that the Khmer Empire had its capital for more than 600 years from the 9th to the 15th centuries.

The Royal Palace cannot quite compete with the phenomenal history and scale of Angkor Wat. But it remains a spectacular place, one which I would happily rise at an annoyingly-early hour to admire once more.