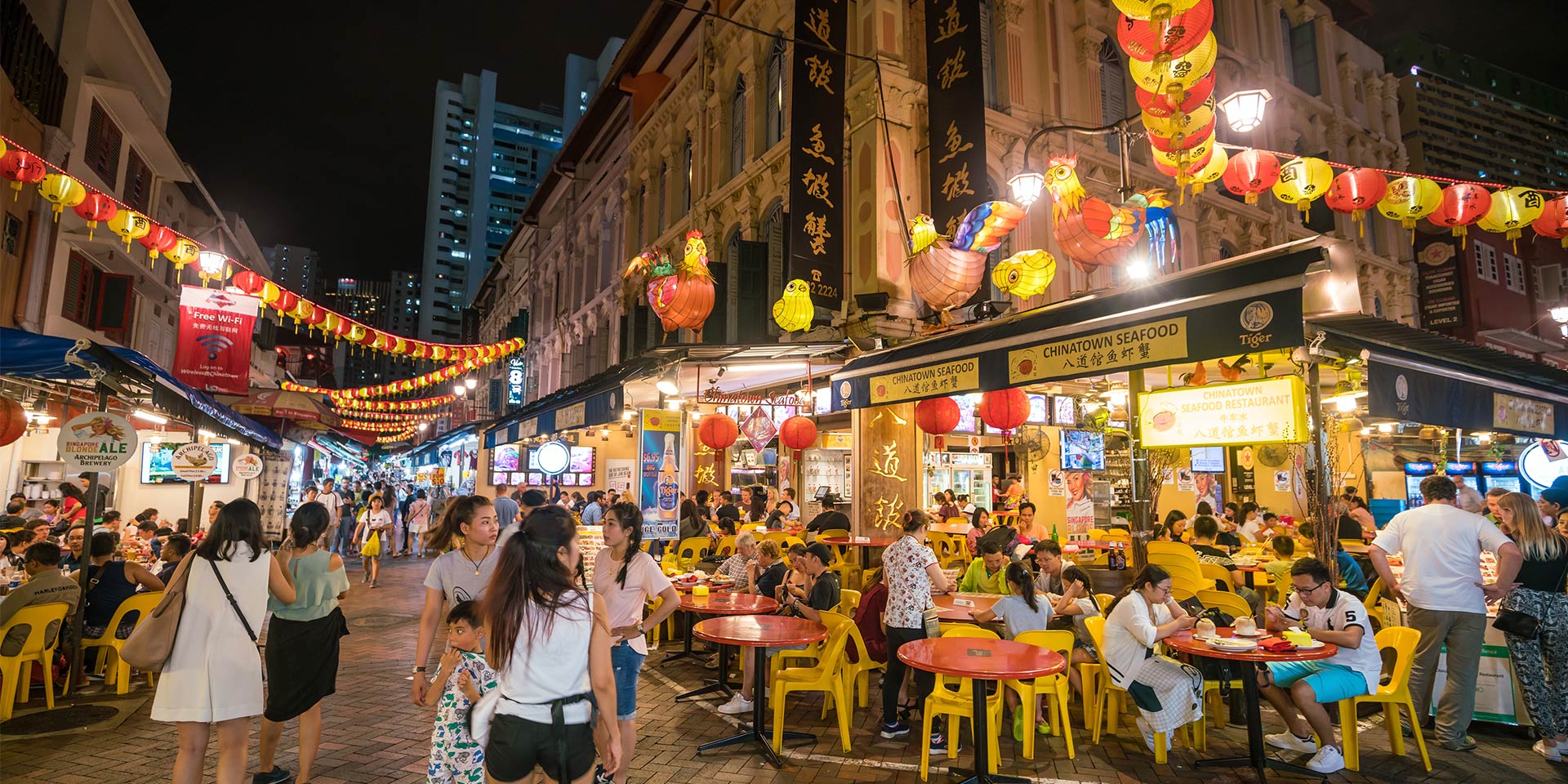 Singapore is a relatively young country and has become one of the most modern and international cities in Asia. The secret to its success comes from its multi-ethnic population. To understand Singapore is to understand its diverse people, cultures, and history. The settlements of the bygone days of Singapore as a British colony and the thriving seaport for European traders have left indelible marks on this city. For a quick taste of the heritage, certain neighborhoods are a must-see for any visitor to the Lion City.

Historically called niu che shui, or “bull cart water,” a reference to how water was transported in the area in the 19th century, this region is, as one might expect, an enclave of Chinese culture.

Aside from a good place to get street food, Chinatown is known for its maze-like lanes and architecture. Most iconic are the shophouses in shades of pastel, mostly built in the 1840s, following more land grant leases. The earliest shophouses were built with no ornamentation, with later ones becoming more decorative. The style was influenced by the multi-ethnic communities around Singapore, with a mix of Victorian, Baroque, Italian, and some with similarity to the painted ladies in San Francisco.

But Chinatown isn’t all about the Chinese. Around the corner from the Chinese temples in Telok Ayer, travelers will find the oldest mosque and Hindu temple in Singapore: the Jamae Mosque and Sri Mariamman Temple. These were built by Muslim and Hindu Indian workers that settled in the area.

ABOVE: Kampong Glam goes back to the days of the Malay Sultan.

The original heart of Singapore, Kampong Glam, was once the seat of the Malay Sultan as well as an important seaport before the British arrived. Under Sir Raffles’ plans, the area was given to the Sultan but would also act as an enclave for the Malay, Arab, and Bugis community. The Istana, meaning castle, of the Malay Sultan is still standing and has been converted into the Malay Heritage Center. It was built in the 19th century on land given to the Sultan by the British East India Company. The relatives of the Sultan lived there until they were resettled for conservation of the Istana in the 20th century.

A stone’s throw away from the Istana is Masjid Sultan Mosque, built at the request of Sultan Hussein Shah in 1824. But the current golden dome structure pictured was only built in 1932 to accommodate the increasing number of Muslims. In front of the Mosque, Muscat Street is named after the capital of Oman, and the two granite archways either end of the street are a gift from the country itself. Parallel to Muscat Street is Haji Lane, which used to be shop houses run by Malay, now a hip place for dining, shopping, and design.

Venture outside the city center and into a residential area known for its Peranakan culture and cuisine: Katong. East of the business district, Katong started out as a plantation owned by wealthy merchants in the early history of Singapore, predominantly in growing coconut and cotton.

The Peranakan houses that it became known for were built after WWII, when wealthy families flooded to the area to settle away from the busy downtown. The Peranakan here refers mainly to Strait Chinese, usually Chinese men who married local women. The most well-known shophouses are on Koon Seng Road in various pastel colors. They were kept as part of a conversation effort but more colorful shop houses can be found on East Coast Road, too. The area is still home to many Peranakan restaurants and a few small museums; however, nowadays it’s a mixed residential neighborhood.

ABOVE: Colorful and Chinese Tan Teng Niah in Little India.

An Artist’s Journey Through the Lion City

Little India is famous for its colourful houses and temples, and to this day it remains a predominantly Indian neighborhood. In the early 19th century, it used to be the home of wealthy Europeans and even boasted a racecourse. It was only when the cattle trade began that this area east of the Singapore River attracted Indian workers. Although, it has also been said that Little India was developed around an Indian convict settlement.

The first temple in the area, Sri Veeramakaliamman Temple, was built in 1881 in the heart of the district, dedicated to Kali the Destroyer, and was a place of refuge for many during the bombings in WWII. However, Little India, like Chinatown, didn’t just consist of Indians, but also Chinese businessmen and their guildhouses. The most famous of which is the House of Tan Teng Niah, home of a Chinese sweet factory owner, known for its colorful facade built in the early 20th century.

The vibrant nature of Little India comes from its temples, the flower garlands being sold on the street, and the trinkets and fabrics on sale. The best place to go for food and clothes is Tekka Center.