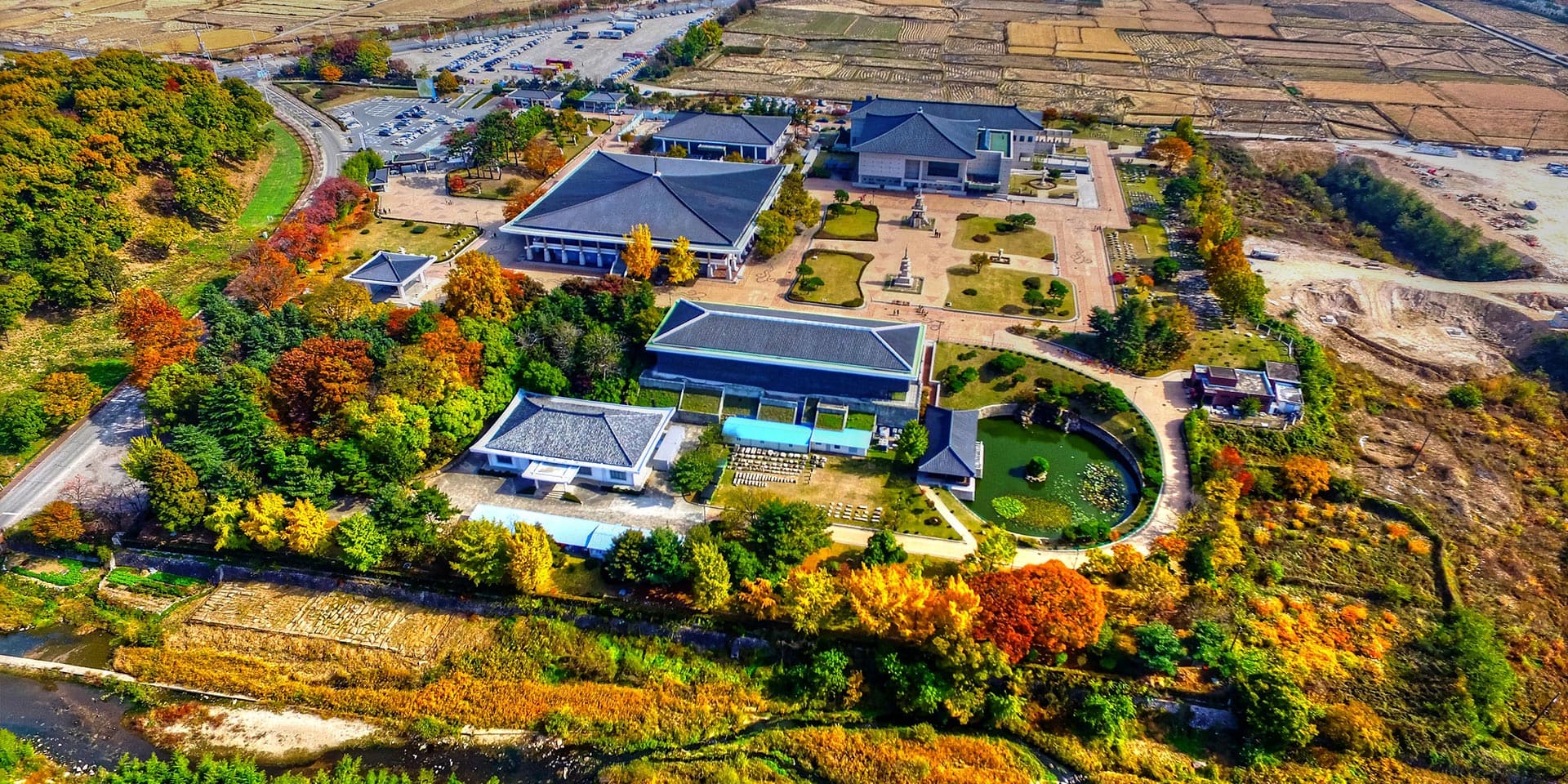 It is a massive open-air museum, scattered across a swathe of lush land in Korea’s southeast. Hundreds of historical remains from imperial mausoleums to temples, pagodas, castle sites, statues, and stone lanterns together tell the story of Gyeongju. For almost 1,000 years, this city was the capital of the Silla Kingdom, a realm of stately power and political might. This reign may have ended in the 10th century but its impressive remnants remain, making Gyeongju one of the most significant historical and cultural sites in East Asia.

Gyeongju today is a tiny city by Asia’s standards, home to only about 280,000 people. Unlike the hulking South Korean metropolises of Seoul (population 10 million) and Busan (3.5 million), Gyeongju is not spiked by dozens of gleaming skyscrapers. It is a comparatively modest, low-rise city with a far slower pace of life. Yet 1,100 years ago it was one of the biggest cities the world had ever known. At its peak, in the early 10th century, it is believed to have been home to almost one million people.

Back then Gyeongju was called Sorabol, which in the Korean language means “capital”, the hub of the Silla Kingdom that lasted for nearly a millennium from 57 BCE to 935 CE. Initially no more than a town, Gyeongju began to grow into a major urban center in the 7th century, with efforts made to replicate the sophisticated urban planning of Chang’an (now known as Xi’an), which was then the world’s largest city. When Korea was unified by the Silla Kingdom in 668 CE, Gyeongju received a major boost to its economy and population. Trade poured into Gyeongju from Japan, China and the Middle East.

ABOVE: Ornamental lanterns and sculptures in Gyeongju.

Local artisans learned from the techniques used to create the then luxury products coming from overseas, leading to a boom in religious art. Buddhism arrived in Gyeongju in the 5th century and the city, to this day, is one of the richest troves of ancient Buddhist art and architecture on the planet – so much so that in 2000 the Gyeongju Historic Areas were listed as a UNESCO World Heritage site. These areas together boast 52 designated cultural assets including the commanding Bulguksa, a revered Buddhist temple, and the Seokguram Grotto, a Buddhist shrine in a hillside cave.

Dating back more than 1,200 years, Bulguksa has been damaged and rebuilt many times over and is now in an immaculately-restored condition. Spread across a large, landscaped site embellished by dense forest, stone arched bridges, and decorative ponds, the temple boasts picturesque grounds. This cluster of colorful wooden buildings, built atop raised stone terraces, include the Vairocana Buddha Hall, the Hall of Great Enlightenment, and the Hall of Supreme Bliss.

They blend into this natural setting and visitors are free to wander throughout most of this gorgeous complex. Within the grounds of Bulguksa are no less than eight National Treasures of Korea, including Seokgatap Pagoda, Dabotap Pagoda, Chilbo-gyo, Yeonhwa-gyo, Cheongun-gyo and Baegun-gyo bridges, the Golden Seated Vairocana Buddhist figure, and Seokguram Grotto.

The latter of these treasures is just as extraordinary as Bulguksa. Built into the slope of Mount Toham in the 8th century, Seokguram is a cave shrine which contains some of the most unique pieces of Buddhist art in Korea. Dominating this shrine is a 3.5-metre tall stone carved statue of the Sakyamuni Buddha sitting looking out to sea. Surrounding it on the walls of the grotto are sculptures of more than 40 Buddhist gods and disciples, carved with a remarkable degree of detail.

ABOVE: Roof architecture in Gyeongju.

The two biggest attractions of Gyeongju, Bulguksa and Seokguram are located in Gyeongju National Park, about 15km south-east of the city center. There also are a host of ancient sites closer to the downtown area. In Namsan, in the city’s south, are the remains of Poseokjeong Pavilion, Cheollyongsaji Three-story Stone Pagoda, Chilbulam Maae Stone Buddha and Bulgok Seated Stone Buddha, each of which date back to the Silla Kingdom.

Not far from there, in the Wolseong area, is the site of a palace from the Silla era. The most significant remnants there are Cheomseongdae, a stone observatory from the 7th century, and the site of Donggung Palace, which once was one of the most magnificent structures in all of Asia.

Scattered across the rest of Gyeongju are many Royal tombs, and remains of fortresses, temples and pagodas. There are so many historic sites in this city form the Silla era that to attempt to list them all would be folly. Trying to visit them all, meanwhile, would take weeks. Fortunately, the tale of the Silla Kingdom is told with great detail at Gyeongju’s wonderful National Museum. This well-organized facility is home to hundreds of cultural artefacts from the Silla Kingdom. It is a great place to start your visit to Gyeongju. Once you have an overview of the phenomenal backstory of this city you will be better placed to decide just which of its endless ancient sites to visit. Gyeongju is dense with history.