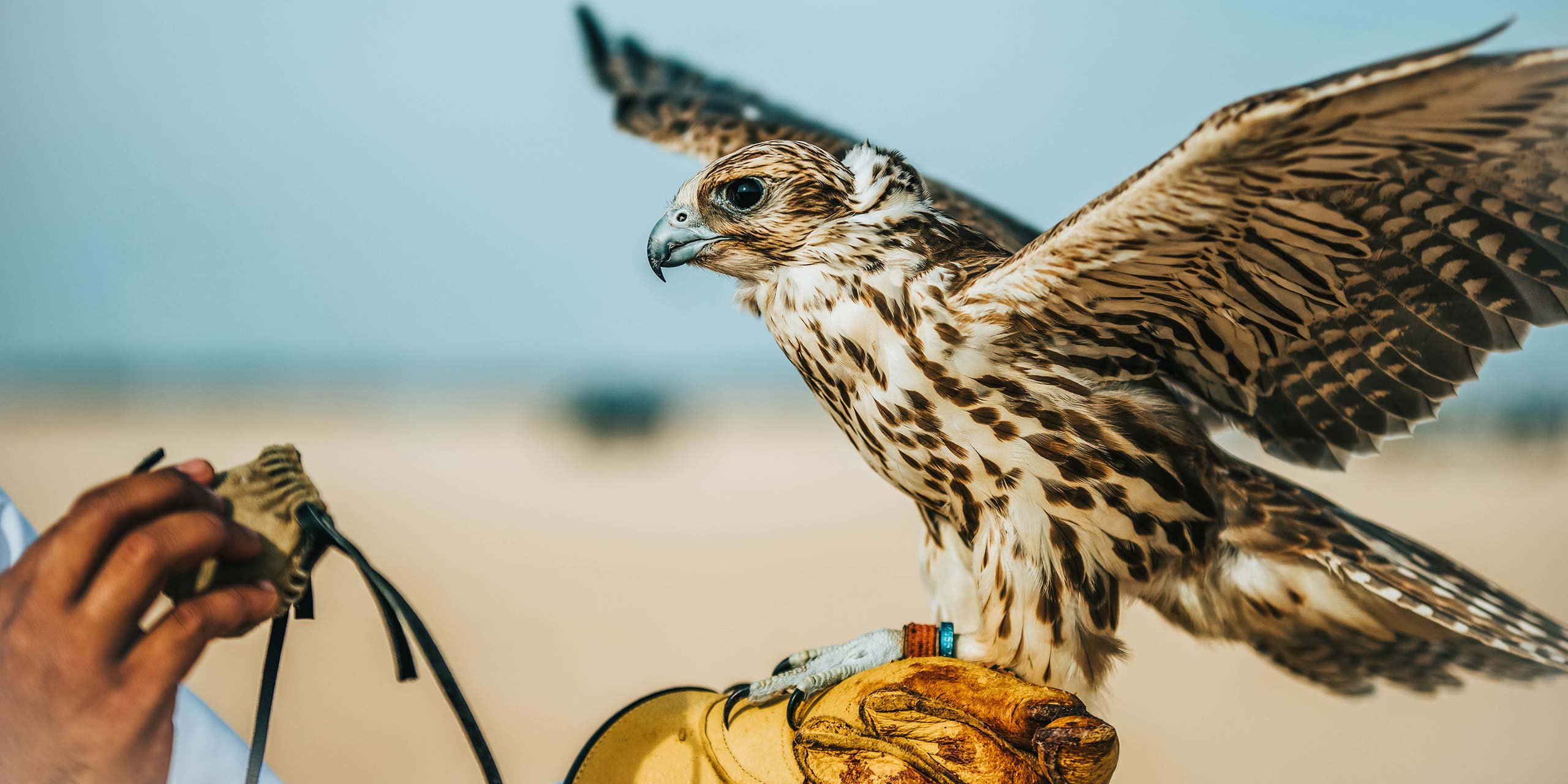 A hush descends on the arena as a figure locks his gaze with a giant peregrine falcon.

The man exudes a kind of gruff tenderness. Lowering his head, he leans in close to offer a few whispered words to the creature resting on his arm.

The bird — stoic and impassive — absorbs the information, cocks its head, and then takes flight, gliding through the reddening sky in search of prey.

Minutes later, lured back by a signal from its master, it returns empty-handed. Offering a salutary flap of its long, pointed blue-grey wings, the falcon perches back down, sinking its sharp talons into the heavy leather gauntlet protecting the man’s wrist.

With its soaring dunes, rugged landscapes and searing temperatures, the Sharjah desert is an intrinsically intense setting. And this battle of wills being played out under the burning afternoon sun is a vivid manifestation of a Bedouin epic that stretches back millennia.

I’m watching this demonstration take place at Kalba Bird of Prey Centre: one of the best places in the UAE to get an up-close look at the majestic hunting birds that are an intrinsic part of Gulf Arab culture.

“Falconry is in our blood,” Hamed, a fellow spectator at the centre tells me as we enjoy the display. “The sport is practiced around the world, but I don’t believe that there is a stronger respect for what these birds are capable of than here in Arabia.”

Despite the country’s modernity, prosperity and focus on its main urban centres, people in the UAE are fiercely proud of their nomadic heritage. And there are few more enduring alliances in the region than the one that exists between man and bird of prey.

Golf is known as the “Royal and Ancient game” due to its venerability. But it’s a mere stripling in comparison to falconry, which traces its roots back thousands of years. Opinion is split on the exact genesis of the ancient art. Some pin it to Central Asia or Mongolia. Others trace it to what is now Iraq.

In the 19th Century, at the Tigris River, English archaeologist Austen Henry Layard excavated the ruins of Dur-Sharrukin, an Assyrian capital built between 720 and 700BC. During the dig, he unearthed a bas-relief that showed, he wrote, “a falconer bearing a hawk on his wrist.”

Whatever the truth about the origin story, there is no debating the exalted status falcons have earned in Arab culture. Prized for their speed and physical abilities as well as vividness and depth of perception beyond the scope of humans, falcons are among nature’s ultimate flying machines. It’s little wonder that the special relationship has strengthened over the centuries.

Arab Bedouins trapped peregrines during their autumn migration from Europe or Central Asia to Africa. The nomads trained the birds to hunt hares or houbara bustards (large terrestrial birds) to supplement their spartan diet of milk, dates and rice. In these life-or-death circumstances, an unbreakable bond was formed.

“For the Bedouin, the (falcon’s) victory over its quarry was a feat of courage and strength in which they felt able to share,” wrote noted Arabist Mark Allen in his 1980 book Falconry in Arabia. “in the (falcon’s) graceful restraint at rest and her grim hardness in the field, the Bedouin saw qualities which were for him among the criteria for honour in a tribal society.”

The oil boom that transformed Arab society effectively brought an end to working Bedouin culture. As life has grown easier for its masters, so too have living conditions improved for the Gulf-based peregrine falcon.

Falcons are treated as VIP citizens in the Gulf. In the UAE, there are two dedicated falcon hospitals. The only animals in the country legally entitled to travel inside planes, they are only allowed in business and first-class cabins, meaning they enjoy a level of pampering up there with the local elite.

As well they should. Falcons are big business these days. The finest specimens are snapped up for hundreds of thousands of dollars and pitted against other thoroughbreds in some of the most exclusive, lucrative races on the planet.

You don’t need to be a sheikh to reap dividends from a falcon. Back at Kalba, I’m witnessing first-hand the emotional currency the bird continues to offer after all these years. As the demonstration comes to a close, the handler turns to face the audience. His bird sits imperiously eyeballing the middle distance as the audience applauds.

From Desert to City: A Luxury Trek Across Abu Dhabi, Oman, and Dubai

Traditions and Cultures of the Arabian Gulf