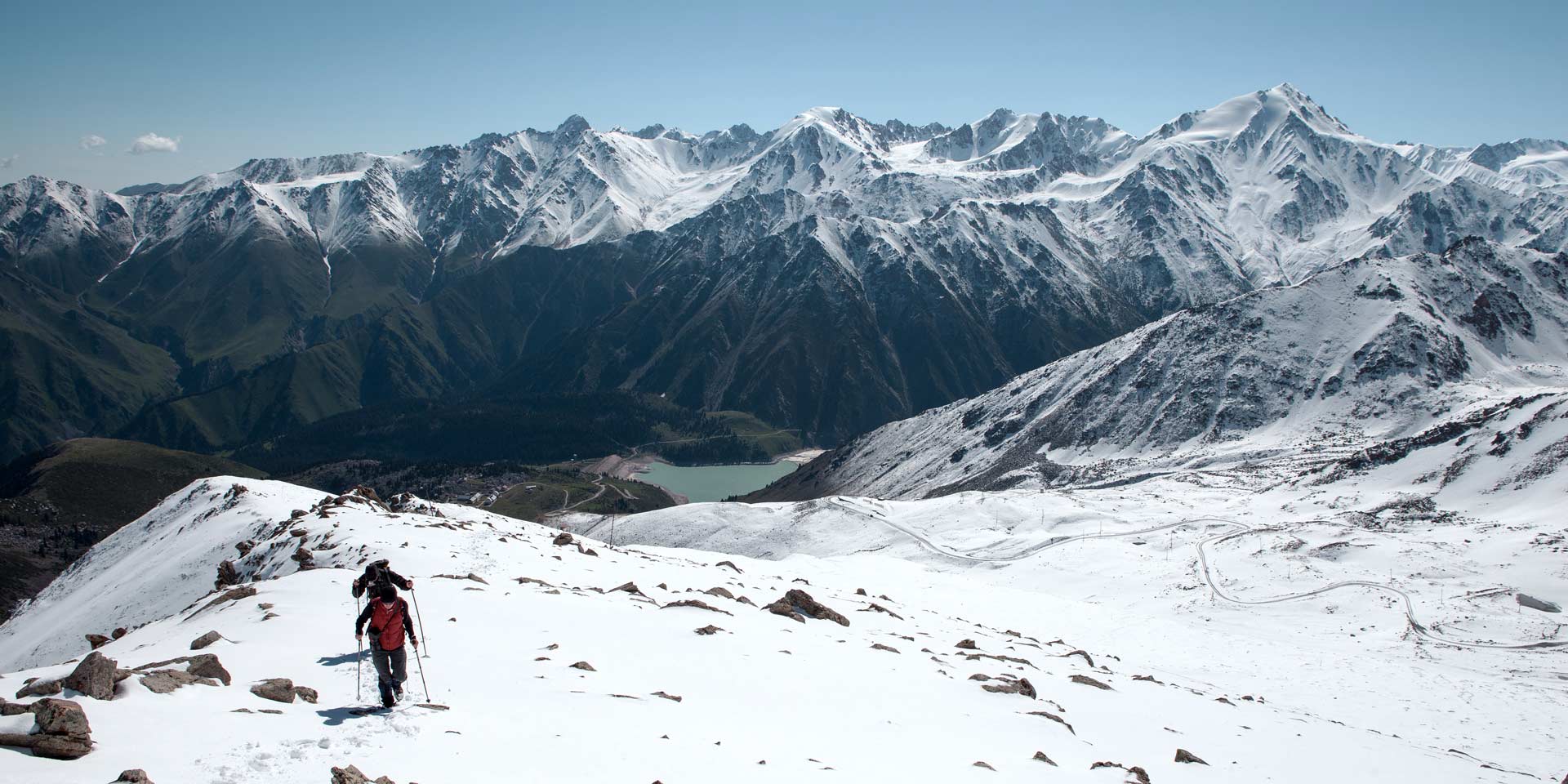 As the largest landlocked country in central Asia, ninth largest in the world, Kazakhstan boasts a rich and intricate history full of influences from the many tribes and peoples who have called it home over the millennia. Combine its past with stunning scenery, from mountains and gorges to lakes and valleys, and it soon becomes clear that a hiking adventure across this amazing landscape offers the chance to discover gorgeous and diverse flora and fauna as well as ancient sacred settings from underground temples to a petroglyph site famous for its rock paintings. Do as Kazakhstan’s nomadic people once did (and in many cases still do) and explore this breathtaking country by foot. Strap on your walking boots and join us on a whistlestop tour of some of the highlights of hiking in Kazakhstan.

Thanks to its position in the center of the Eurasian steppe, the land that we now call Kazakhstan – inhabited by humans for almost one million years – has always been a home or crossroads for peoples, tribes and dominions. As part of the Hun and Turkic empires, disparate factions were united and later the independent states that had been created were all ruled by the Mongol empire. Parts of the land were annexed by the Russian empire until finally modern, independent Kazakhstan was formed in the 1930s, when Russia subdivided Turkestan. Such long and rich history and diversity of cultures ingrained into the landscape has left behind plenty of treasures to be discovered as you embark on your adventures.

From the city of Shymkent, travel into the mountains of the south to make the trek up to the rocky ridge of Kazygurt, the holy site said to be the place Noah’s Ark came to rest as the legendary floods receded. Today, here in the western peaks of the Tien Shan range, a replica of the vast ship has been built, according to the size described in the Bible. Indeed, the Kazygurt mountains and their surroundings seem to be a singularly sacred destination. Hike to the second summit above that of the Ark and you will find a massive formation of stones in the shape of a cross, attributed either to the Zoroastrians, followers of the prophet Zarathustra, or perhaps as an act of worship of Tengri, the Turkic god of the sky. Just 15 miles from Mount Kazygurt, you can trek through Sairam and down into what is thought to be an ancient Buddhist temple, hidden underground.

Continue your journey back in time, heading out from Taraz in Jambyl province for an exploration of Akyrtobe – the ruins of an ancient stone settlement. Combine this discovery with that of the mysterious burial mounds of noble warriors and rocky petroglyphs at Berikara Gorge, which depict long forgotten tribal chieftains. Here, you can trade your hiking shoes for riding boots and make like the local nomadic horsemen, discovering the area on horseback.

Turn your sights to the Ulytau mountains, the site of a historic unification of a number of Kazakh tribes and an ideal setting for hikes through the long and rich history of this fascinating civilization. Trek down and up the winding mountain trails to uncover the ancient graves, mausoleums and tombs of fearsome tribal leaders including Edige, the great military commander; even the great Tamerlane carved a slab of rock here to commemorate his visit.

Life on the wild side

Besides its peoples’ fascinating history, Kazakhstan is home to a diverse litany of exotic animals thanks to its varied terrains. As part of your epic journey, hike through the breathtaking landscape of Altyn Emel National Park; in the shadows of rocky mountains, look out for the wild donkeys, ibex and gazelles that roam free across this semi-desert terrain, not to mention the reptiles who make their home here. Make the trek down into nearby Kapchagai reservoir to participate in the thriving industry here with a spot of fishing. The wildlife preserve of aforementioned Berikara Gorge is another favored spot for anglers and, with its gorgeous forested areas packed with birdlife, hikers will be spoilt for rare species to discover – don’t forget your binoculars.

Unsurprisingly, a landscape filled with such a range of wildlife makes for a stunning backdrop; if you are in search of sweeping panoramas and views to feed your camera lens, treks across Kazakhstan will not disappoint. Explore the glacial peaks, cascading falls and rolling fields of Aksu-Zhabagly nature reserve, the oldest in central Asia. Here in the foothills of the Tien Shan Mountains, you can hike to the Taldu Bylak – Kazanchy Kyr natural boundary and along the shore of river Zhabagly. Head into Aksu canyon, carved by the mighty river of the same name, in Sairam Ugam National Park, near Shymkent. Spend your days walking, picnicking and taking photos in the natural wilderness and your nights camping out, surrounded by stunning beauty, or curled up in cozy guesthouses. In the Turgen River Gorge, a plunging alpine valley just 40 miles east of Almaty, journey through old-growth forests, gleaming glaciers and rocky peaks to the spectacular Kairak waterfall, crashing into its stone pool. In Charyn National Park, meanwhile, you can hike down the trail into the second largest canyon in the world, after the Grand Canyon. Over the millennia and ages, the changing climates and ever-shifting nature has carved and weathered the rock faces into colorful formations and undulating shapes.

For the ultimate adventure, make an action-packed trek through the Turgen Valley region, heading for the Turgen Basecamp. Spend your days hiking up the cliff face of a gorge to the elevated grasslands of the Assy Plateau, where Kazakh nomads roam and camp during the summer month. Trek onwards and upwards toward the Temir-Tas river for views of the Zailiskiy Alatau mountain range and finally descend down to the Turgen Basecamp, following the path of the river. Spend each night camping out beneath an uninterrupted canopy of stars.