The Best Beaches in Vietnam 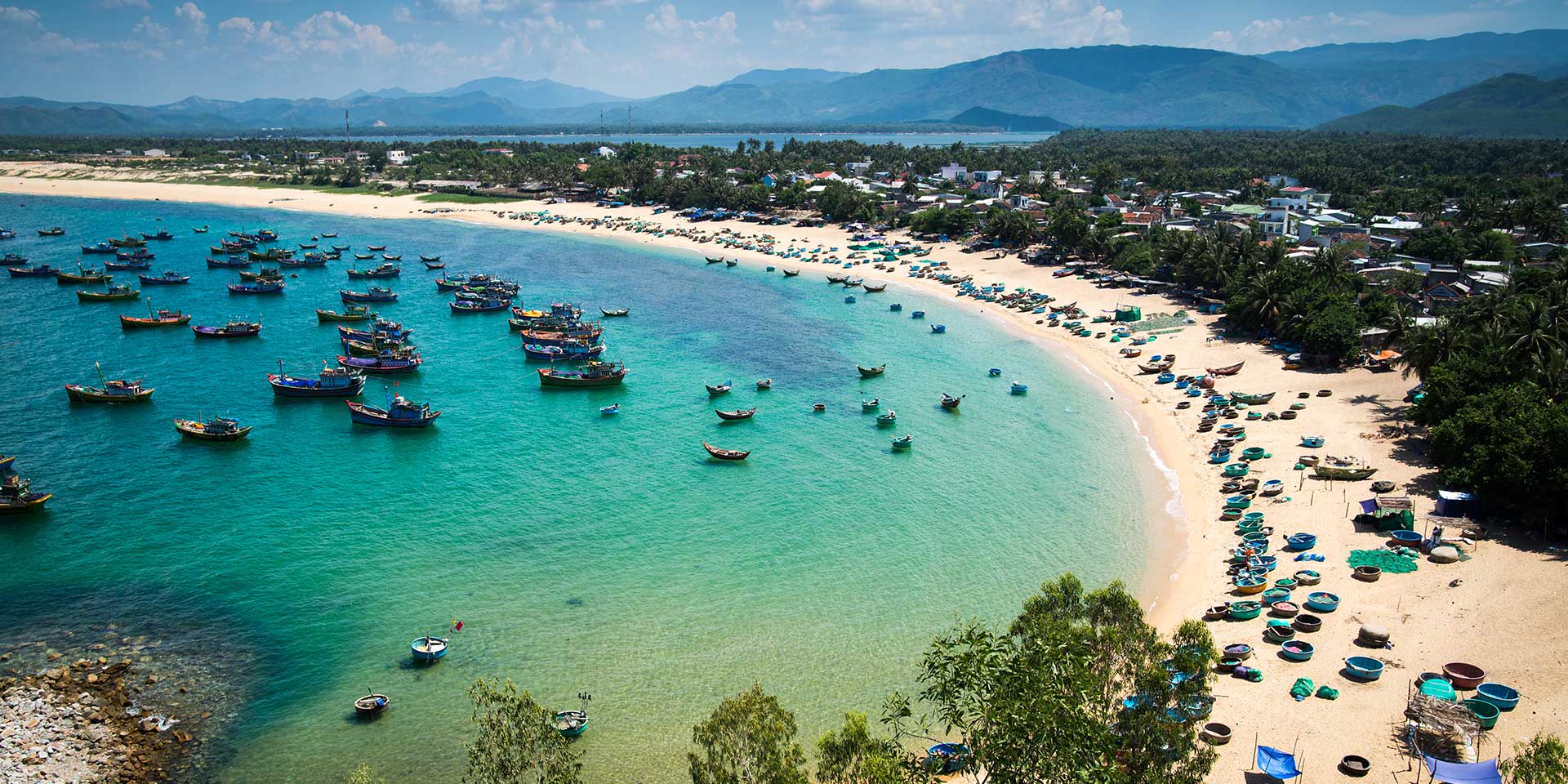 Despite boasting more than 2000 miles of coastline, Vietnam often gets overlooked as a beach holiday destination. In an effort to redress this glaring oversight on the part of beachlovers across the globe, and to hint at one or two hidden gems you can enjoy before the rest of the world catches on, here are our top picks of Vietnam’s many and beautiful sandy shores. Unspoilt Con Dao sits just off Vietnam’s southern coast and, having only relatively recently opened up, is fast becoming an unmissable destination for eco-tourists. A trek through the jungle will bring you within close proximity of macaques, black squirrels, white-rumped shamas and greater racket-tailed drongo, while up in the leafy canopy rare birdlife, including the pied imperial pigeon and the red-billed tropicbird, can be found. Its clear waters and expansive coral reef, meanwhile, are home to exotic marine life, including sea cows, turtles and giant barracudas, to name a few. In fact, such is the untouched beauty of the area, a turtle sanctuary has been developed on the tiny neighboring island of Bay Canh, where you can see the babies hatch undisturbed and take their first swim in the surf. To fully appreciate the abundant natural beauty, we recommend a stay at the stunning new Six Senses resort, where you can wake up to views of the ocean from your eco-friendly villa and spend the day wandering the complex, which comprises of a fishing village, art gallery, local market and spa. Mui Ne’s long stretch of crescent beach on the southeast coast of Vietnam has attracted holidaymakers from all over the country and beyond for years. Irresistibly alluring with traditional seaside charm, the beachfront promenade is packed with cozy and elegant eateries, offering views out over the water where daring kite boarders flip and fly. Indeed, thanks to the ideal position of the beach and the strong breezes coming off the ocean, Mui Ne has developed quite a reputation as a destination for watersports: get your thrills aboard a jet ski or try your hand at windsurfing for a day of fun and excitement. And it’s not just on the coast that exhilarating adventures can be found. Sand surfers flock to the nearby dunes to slide at top speed down the red and white powdery, undulating shingle. A short drive out of town brings you to the crumbling tower of Po Sha Inu, built and carved by the ancient Cham people who once ruled the area. For a taste of the seafood for which the region is rightly famous, you can head up the coast where on the top tip of Mui Ne’s bay lies a picturesque fishing village, with colorful little boats assembled to stock the local market with fresh catches. A stay at the Princess d’Annam Resort & Spa, which sits just to the south of the bay, allows for the delights of Mui Ne to be laid out in front of you. From your private villa, enjoy views of the ocean and the old French lighthouse, and indulge in delectable fresh fruits of the sea al fresco in the hotel’s numerous elegant restaurants. Just a short hop from Ho Chi Minh City airport brings you to the idyllic island of Phu Quoc, also known as the jade isle thanks to the verdant vegetation and unspoilt forest with which it’s covered. Sitting to the west, off the coast of Cambodia, with white sand and crystal waters packed with colorful submarine life, this unsung and lesser explored treasure is every bit as heavenly as any of its counterparts in Thailand or Malaysia. But if it’s adventures beyond lounging on the beach that you seek, Phu Quoc boasts them in abundance, as well. On the west coast, treasures are to be found at the pearl farm, where the precious stones are collected from the oceanic depths, ready to adorn you. Take a trek into the lush forest along a cobblestone path, surrounded by orchids and wild mushrooms, to discover Suoi Tranh waterfall, and plunge into the cool lagoon waters; alternatively, explore the surrounding jungle, home to rare wildlife and winding cave systems. A visit to the pretty fishing village of Ham Ninh offers a romantic end to any day on the island with a oceanfront meal of freshly caught seafood. Resorts like Salinda, set to open in March 2016, and La Veranda offer every comfort and convenience to make your stay in paradise even more heavenly. The beautiful old coastal city of Hoi An has it all – beauty, peace and culture – and for that reason, it’s our favorite. The city, steeped in history, is packed with beautiful architecture and a melting pot of ethnicities, reflecting its fascinating past. The old town, all of which is considered a UNESCO World Heritage Site thanks to its many buildings of note including the Japanese Covered Bridge, the Old House of Phung Hung and the Sa Huynh Culture Museum, is well worth exploring, and it’s especially nice to do so on a bicycle. The surrounding countryside inland is not only beautiful but fragrant with coffee plantations. The lush forests are home to another heritage site, My Son, where ancient Hindu temples await intrepid explorers hungry for history. All of this is at your fingertips in Hoi An, not to mention its gorgeous stretch of pristine, sandy coast. China Beach has long been popular as a tranquil retreat and its crystal waters teem with tropical creatures, luring the aquatically inclined. Just off the coast, meanwhile, are the peaceful fishing islands of the Cham people, where rare birds nest and delicious seafood is caught daily. For a truly magical appreciation of Hoi An’s charms, we recommend you stay at the Nam Hai hotel, located on China Beach with matchless views out to the ocean. Here, the private villas are decked out with hardwood and four-poster beds, many with their own private pool, and the spa backs onto a peaceful lagoon.