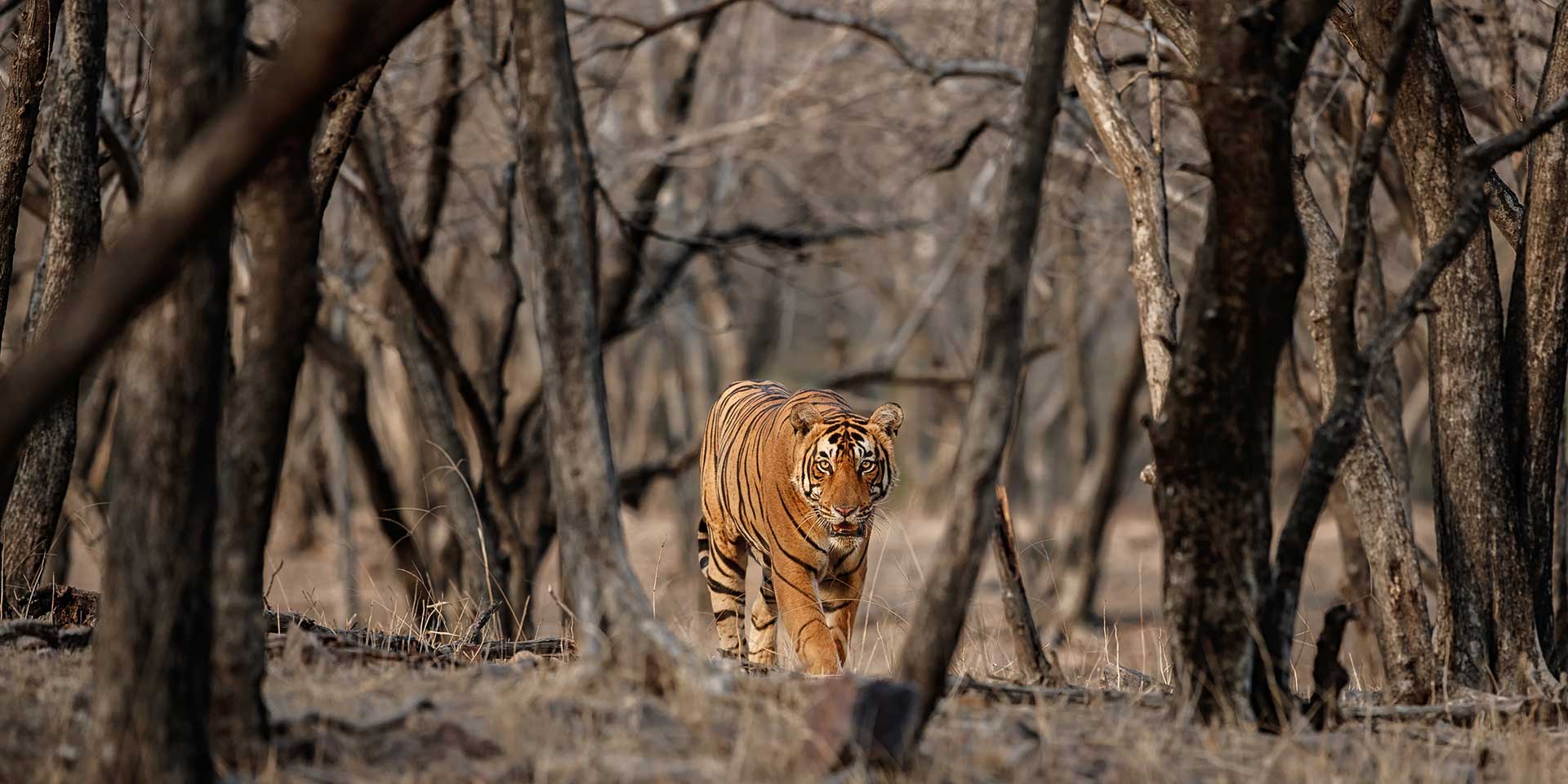 From dense jungles to highly-populated cities, India is one of the world’s most culturally-rich nations. A tour can have you exploring the streets of New Delhi to the beaches of Goa, visiting the shops of Mumbai and the gleaming Taj Mahal. But one of our favorite ways to see India is to delve into the natural beauty and wonders of the country’s many national parks.

Here, we’ve rounded up our favourite national parks for the ultimate wildlife experiences in India.

This large reserve in the heart of Northern India is a cross-section of the country’s natural terrain: from crystal blue lakes to savanna plains, dense forests to the Aravalli and Vindhya Hills, it is no wonder that so many incredible species call Ranthambhore home.

The park is particularly known for its population of Bengal Tigers, as it is one of the few remaining places to go in search of these majestic creatures. The park is best explored by jeep, where you may catch glimpses of the Bengals amongst the leopards, hyenas and variety of exotic birds.

Stay in one of the 25 luxurious tents at the Oberoi Vanyavilas, voted the best resort in the world in 2010!

Part of Project Tiger, Sariska National Park covers 300 square miles in the Aravalli Hills, allowing for varied terrain including steep cliffs as well as grasslands and forests. In addition to tigers, you can spot macaques, leopards and the langur roaming the park, as well as pay a visit to the ancient Ajabgarh Fort, where the local nobility once picked off their prey during hunting excursions in the 10th century.

While visiting Sariska, enjoy a stay in nearby city of Alwar, located in the lush valley of the Aravalli Hills. From here, you can explore the beautiful Mansarovar Lake by cruise, taking in some breathtaking birdwatching (particularly spectacular from October to February).

A World Heritage Site, Kaziranga National Park is the ideal place for a bit of forest trekking. Special permission is required to enter this special spot, so we recommend embarking on your journey with an expert naturalist to guide you through the park’s varied flora and fauna. Enjoy the chance to meet some of the park’s most honoured resident elephants, playing mahout while bathing them in the Brahmaputra River.

Another highlight of Kaziranga is spotting the rare South Asian river dolphins during a cruise downstream. As the boat cradles the shore, you may also enjoy a visit to an 11th century Hindu temple, experiencing the intersection of nature and culture at its purest.

The largest national park in the Madhya Pradesh state, Kanha National Park is another home of the elusive Bengal tiger, but it is even better known as being the setting for the ultra-popular Jungle Book. Set out like Mowgli in search of your own Baloo, saying hi to leopards, sloth bears, Barasingha, Indian wild dogs and, of course, Bengal tigers along the way.

Soak in as much of the jungle life as you can with morning bird safaris and afternoon game drives, even going on an elephant safari where you’ll be able to mount and bathe one of these incredible creatures for an unforgettable experience to put in your own jungle book.

Nestled into the grounds of Kanha National Park is the Taj Banjaar Tola. This hotel truly immerses its guests into the heart of India’s jungle.

One of India’s most popular national parks, Bandhavgarh is home to some of the nation’s most dense tiger populations as well as barking deer, sambar, nilgai, Indian wolves and a delightful population of birds and butterflies. Game drives and elephant treks are the best methods to take in the park’s remarkably diverse collection of wildlife.

For something different, be sure to immerse yourself in local history with a visit to Bandhavgarh Fort, dating back nearly two million years. Next, hike to Climber’s Point, where the expansive panoramic views of the park are sure to leave a lasting impression.

Perched atop an elegant Indian elephant for an exciting trek, or aboard a boat cruising down the Ken river taking in all the sites of the riverbanks, wave ‘hello’ to some of Panna National Park’s most revered residents, from Indian barking deer and sloth bears to antelope, nilgai and tigers.

Whether you wish to explore multiple national parks in search of the Bengal Tiger and other exotic animals, or you’d like to mix up a tour of temple and city hopping with some time getting back to nature, let us be your guide: we have a large variety of India adventures for you to choose from, or our India experts would be happy to work with you to craft your own. Contact us today to begin making your nature-bound Indian dreams come true!