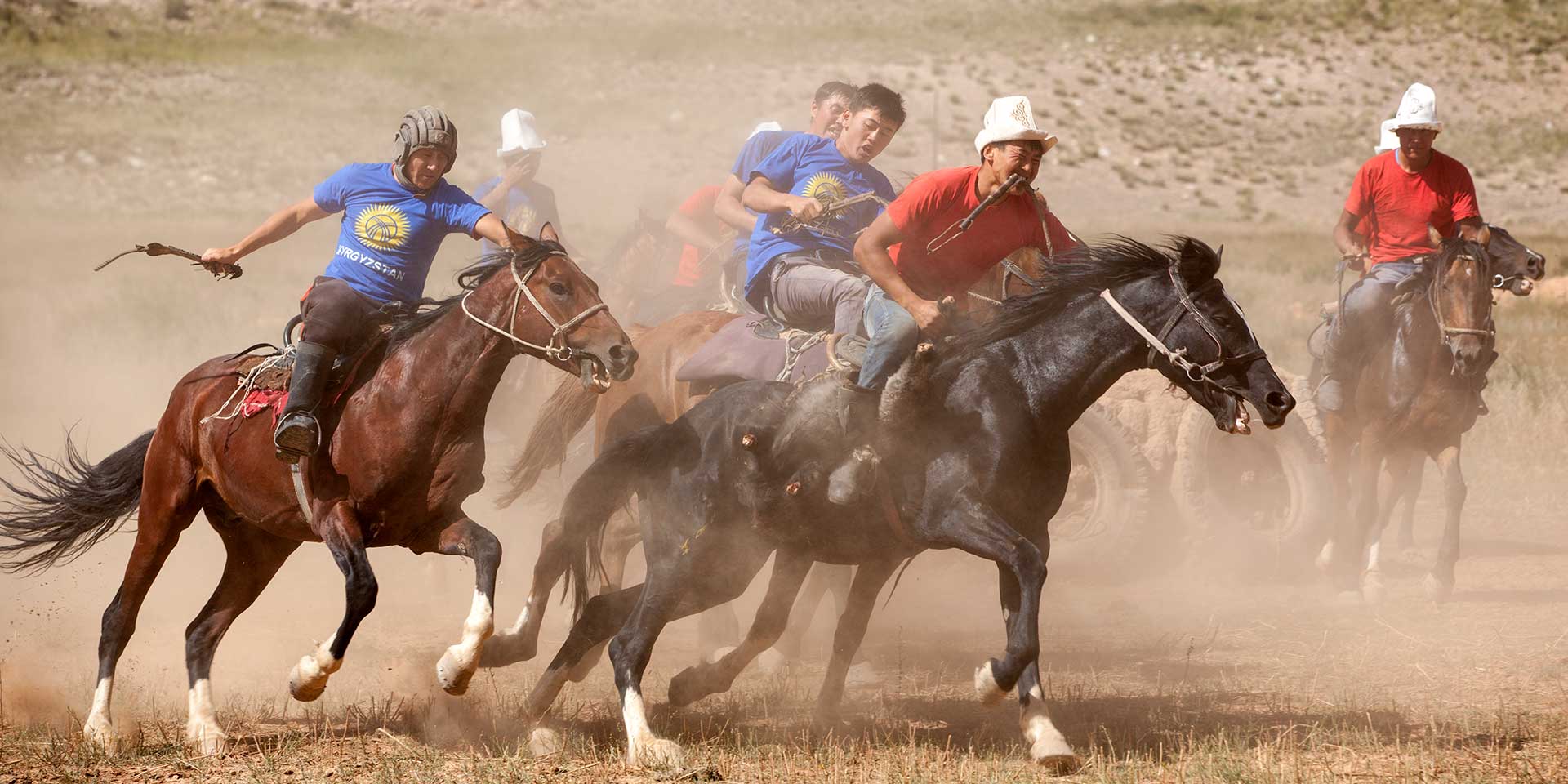 One of the main reasons for the timing of my trip to Kyrgyzstan was to have the chance to check out the country’s National Horse Games Festival, which takes place in August. It’s a festival that’s not very well-known outside of Kyrgyzstan, but one I had long wanted to observe.

To get to this ancient event, we drove 200 km from Bishkek, three hours through the stunning Chui Valley with its rural villages and breathtaking countryside, passing the 60 km long Kara-Balta Gorge and the longest tunnel in Kyrgyzstan to the village of Kyzil-oi, in the Suusamyr Valley.

We checked in to our guest house. I had been expecting the place to be basic, but what I hadn’t expected was that our rooms would be double-booked. It took a dispute with the owner before we were finally able to check in to our rooms. The owner had also given us another bit of bad news – there hadn’t been any water in the village for a week. So showers were not an option, nor were flushing toilets.  We went to bed early, hoping to wake up with better luck the next day.

And though we were unable to shower when we awoke the next morning, we were excited nonetheless to see the festivities. As we had rightly predicted, the light of the new day allowed us to see that our hotel may have been humble, but the surrounding scenery was outstanding.

We were greeted at the festival by various cultural demonstrations, alongside a national food fair. Among the cultural activities was felt-making, singing, national music, cooking demonstrations, and various national games like arm wrestling and tug of war. To my surprise, around 60 tourists were in attendance, including crews from the BBC and CNBC travel divisions. Less surprising was that the local festival participants had clearly little – if any – previous exposure to foreigners, and though they were shy, they were friendly and happy to pose for my photos while demonstrating their traditions. One particularly striking young woman donned traditional dress…so you can imagine my surprise when she turned out to be the DJ for the festival, blasting a bizarre combination of traditional Kyrgyz music and techno.

We dined in a traditional yurt for lunch, before heading back out into the festivities to witness a variety of horse games.

The first game we witnessed was called Oodarysh, and consisted of two men wrestling…on horseback. They fight until one falls off, and the one still sitting proudly is then declared the winner. Next up was a game called Tyin Enmei. For this activity, three bags with coins are placed on the ground, and riders were expected to pick up the coins from atop their horse, while galloping past. The rider who picked up the most coins won.

Kys Kuumai was the next game. In ancient times, this was a type of marital ritual. There are two players – a man and a woman (usually young and unmarried), on horseback of course. The man would chase the woman and try to kiss her. In the past, if he succeeded, he would take her for a wife. Nowadays, if he succeeds, it means he will be a good husband.

The final highlight of the festival was a game called Ulak Tartysh,  which to me was the highlight of the entire event. The game is played across Central Asia, being quite popular in Mongolia and Western China. It is most commonly known by its Afghan name, Buzqashi. It’s a form of polo, played on horseback, but with a gory twist: the object the players are trying to score with is a headless goat, usually killed right before the match. The teams consist of 12 to a side, and the number of rounds to be played is set by the referee. As one might expect, the team who puts the body into the net – this is counted as a goal – the most times wins. In ancient times, the game was played with the body of a wolf rather than a goat, going by the name of Kok-Baru – which translates as ‘blue wolf’. After the game, the players from the winning team took turns posing for photos with the headless goat. Even I joined in, clutching the body before the winners feasted on it. The festival was a fascinating, once-in-a-lifetime experience, and something I was finally able to cross off my bucket list. Though it was far from a luxury travel experience, sometimes one must rough it a bit to discover the most fascinating elements of a country’s culture. And after attending the National Horse Games Festival in Kyrgyzstan, that’s exactly what I feel I did.