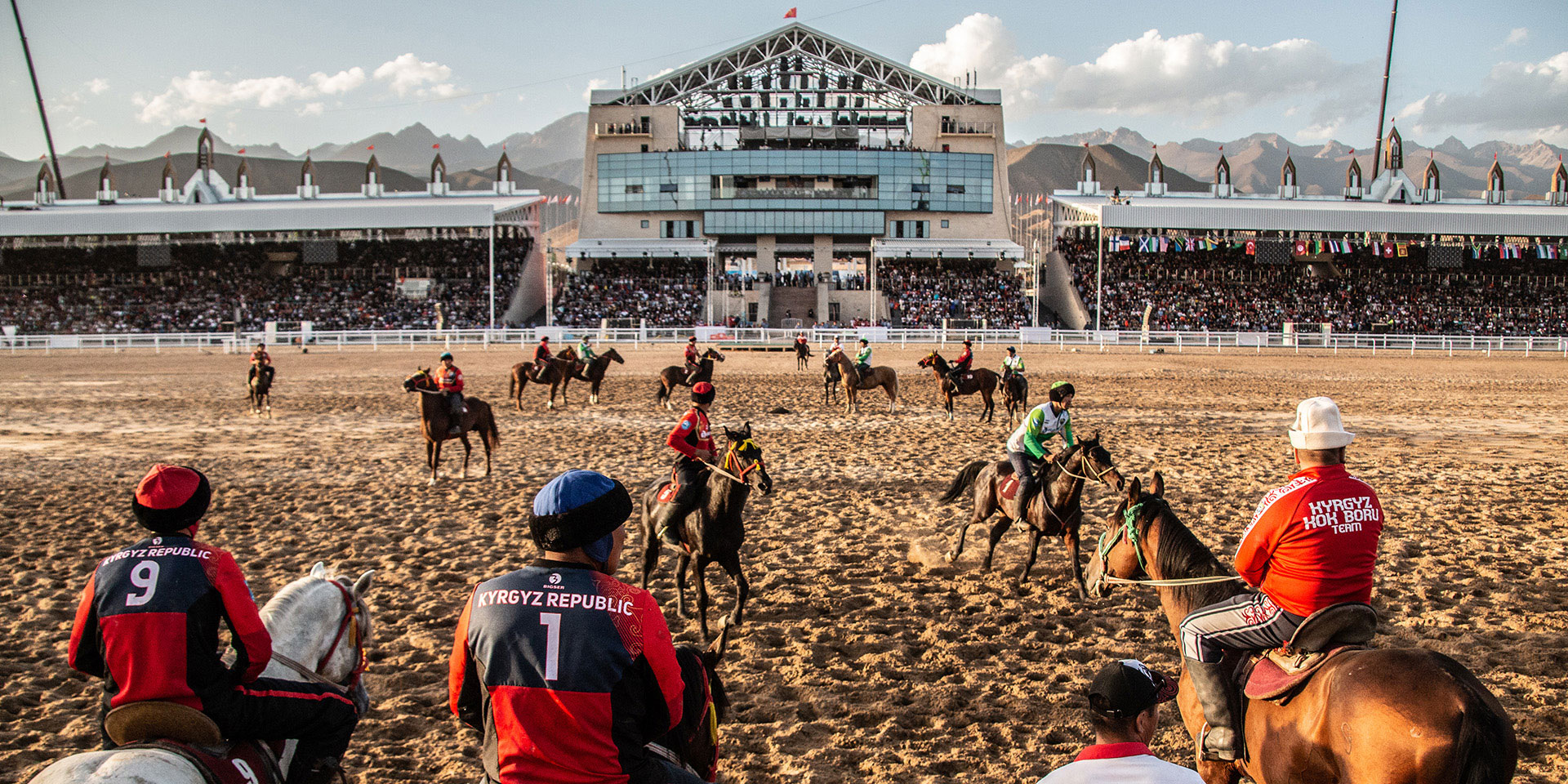 “The Uzbeks, they are too Russian,” she claims. “Kyrgyz people, they are much better nomads.”

The culmination of the World Nomad Games was about to begin. Kyrgyzstan and Uzbekistan were trotting their horses onto the pitch at the Hippodrome, waving their national flags while the crowd worked itself into a frenzy. This was the final of the Kok Boru, the most important event of the entire week, and the defending champions and hosts Kyrgyzstan wanted to remain champions of their national sport, a sport which the rest of the world – if they know it at all – know better as dead goat polo.

After a week of bizarre but utterly compelling nomadic sports, watching galloping horse riders flinging a headless goat into a pit was the only fitting way to end the World Nomad Games. This was a true test of nomadic spirit, and it was a test that would decide if Kyrgyzstan or Uzbekistan were the better nomads.

ABOVE: Inside the Hippodrome for Kok Baru.

Forget the FIFA World Cup in Russia, forget the Asian Games in Indonesia and forget the Winter Olympics in South Korea, the award for the most unique sporting event of 2018 goes to Kyrgyzstan, hosts of the World Nomad Games.

Held every two years and now in its third edition, the event is hosted in the Soviet-style resort town of Cholpon-Ata on the shores of Issyk Kul Lake, three hours away from Bishkek. From horseback archery and horseback wrestling to Kok Boru and hunting with eagles, the World Nomad Games is an entirely unusual sporting and cultural event.

The games opened officially with a tremendous performance from the hosts Kyrgyzstan in the Hippodrome in Cholpon-Ata. Horse acrobats galloped across the field, while hundreds of dancers and singers acted out an epic story from Kyrgyz history.

ABOVE: Opening ceremony for the World Nomad Games.

Fireworks filled the night sky and after a speech from the President of Kyrgyzstan himself the athletes paraded across the field.

There were huge teams from Kazakhstan and Russia, while a surprising number of Americans were walking under the US flag. A lone Australian sumo wrestler in flip flops marched at the front while the enormous Kyrgyz team brought up the rear. In all there would be almost 3,000 competitors from 80 countries, competing across 37 sports.

ABOVE: A participant on fire at an additional opening ceremony in the Kyrchyn Valley.

One opening ceremony wasn’t good enough for the World Nomad Games though. They needed two. While many of the sporting events were held in the Hippodrome, up in the Kyrchyn Valley away from the lake, a huge, sprawling yurt camp had been built across the steppe.

This was the ethno village, and there were displays of culture not just from across Central Asia but from across the world. To open up this city of yurts, Kyrgyzstan put on on another huge performance, with hundreds of horse riders acting out mock battles that included jousting and setting a few unfortunate warriors on fire. It was dusty, chaotic madness and it was brilliant to watch.

“He is a good nomad,” Zaman told me as he introduced me to his ‘boss’ Mamatei after inviting me into their yurt at Kyrchyn. Zaman and his fellow horse riders had been on the field during the ceremony, showing off their jousting and horseback skills to the crowds. Zaman showed me his battered, leather shield, where he had taken a huge hit from a lance before being knocked off.

ABOVE: Images from the opening of the World Nomad Games.

Even though it was all staged, they hit each other at full gallop, and to be called a good nomad was one of the highest compliments a Kyrgyz could be given, but a compliment that had to be earned on the field. While the games aren’t exactly a representation of modern life in Kyrgyzstan, locals like Zaman soon showed me that this was really about the preservation and revival of a nomadic culture that had almost been lost during the Russian and Soviet eras.

As I left his yurt, Zaman told me that I should watch the horseback archery, to see true nomadic skills in action.

Tip of the Arrow

ABOVE: Hadley (left) and Mike (right) of the US archery team in Kyrgyzstan.

Along the valley, eagles were flying around in the Burkut Saluu event – a competition to show off the prowess of eagle hunters – while close by, archers in outlandish national dress were readying their bows. There were Mongolians, Kazakhs, Kyrgyzs and, Hungarians, but most surprising of all, an American flag was flying on the sidelines.

A US archery team from Texas had flown all the way out to Kyrgyzstan to compete, and not just in traditional archery, but in horseback archery. Mike, a veteran of several international competitions explained that there was a growing community of horseback archers in the US, and they’d all traveled to Kyrgyzstan on their own time and money to compete in the World Nomad Games.

ABOVE: Images from the archery competitions.

Competitors must be in their national dress, and the US team were wearing cowboy hats, jeans and boots. Hadley, the US team captain, took tenth in the fast paced men’s event, galloping along the line and sinking three arrows into the three targets on his last run, including a bullseye on his final shot.

The women though, had to wait until the next day for their turn, and intrigued by the sport I turned up to watch again. Suzie, a competitor from the US, told me how they’d been woken up at 11pm the night previously for a surprise bow inspection in their hotel, and now they were only just meeting the horses they were to ride.

The locals had a definite home advantage in this respect, and as the event went on, teams were getting angry as the Kyrgyzstan riders seemed to get advantage after advantage from the local referees on the field.

ABOVE: Serena on horseback for Team USA.

Suzie was knocked out, but her fellow American Serena went through to the final four, to battle it out for glory with nomadic women from Turkey, Mongolia and Kyrgyzstan.

In a tense final, Janset from Turkey took the gold, leaving the US and Mongolia in a final fight for silver and bronze. Horses galloped, arrows thumped home, and eventually, the US came in third after a close round of shooting.

The whole team was ecstatic with the result. They were the underdogs in this nomadic world, and they celebrated their third place at the World Nomad Games loudly and passionately.

ABOVE: Kyrgyz score at Kok Boru.

Although I was still reeling from the tension of the horseback archery, there was still the small matter of the Kok Boru final in the Hippodrome that evening. In the semi finals the day before, Uzbekistan had unexpectedly beaten Kazakhstan to make it to their first final, after a violent game that ended 5-4.

ABOVE: Images of the highly anticipated Kok Boru match ups.

Kok Boru is one of Central Asia’s most infamous sports, and the stands were packed. The aim of the game is simple, to score points by throwing a headless goat carcass into what can only be described as a dead goat bin. It’s a game that represents all that it means to be a nomad; horsemanship, strength, bravery and determination.

Each game is a fierce battle, and players were thrown about and were knocked off horses as the two teams went for victory. It wasn’t to be Uzbekistan’s day though, as soon the Kyrgyz were scoring point after point. By the third and final twenty minute period, the game was done, and the Kyrgyz team began showboating, even attempting forward flips with the dead goat into the goal while the dejected Uzbeks struggled to keep up.

ABOVE: Uzbekistan scores as the sun sets on the World Nomad Games.

The crowd was raucous as the game ended 32-9 and Kyrgyzstan took the final victory for the third edition of the World Nomad Games, as they had the first two.

Kyrgyzstan then, had proven themselves to be the better nomads.

It wasn’t just the Kok Boru or the horseback archery that had captured the imagination of locals and visitors alike, but the entire event. The opening ceremonies, the spectacular setting and the passion of the competitors all contributed to what was an intense cultural display of nomadic traditions, and at the closing ceremony on the final evening, Kyrgyzstan officially handed over the next edition to Turkey.

As the event grows from strength to strength, for the first time in its short history, the World Nomad Games will be held, in two years, outside of Kyrgyzstan, where perhaps it might just capture the imagination of the rest of the world too.