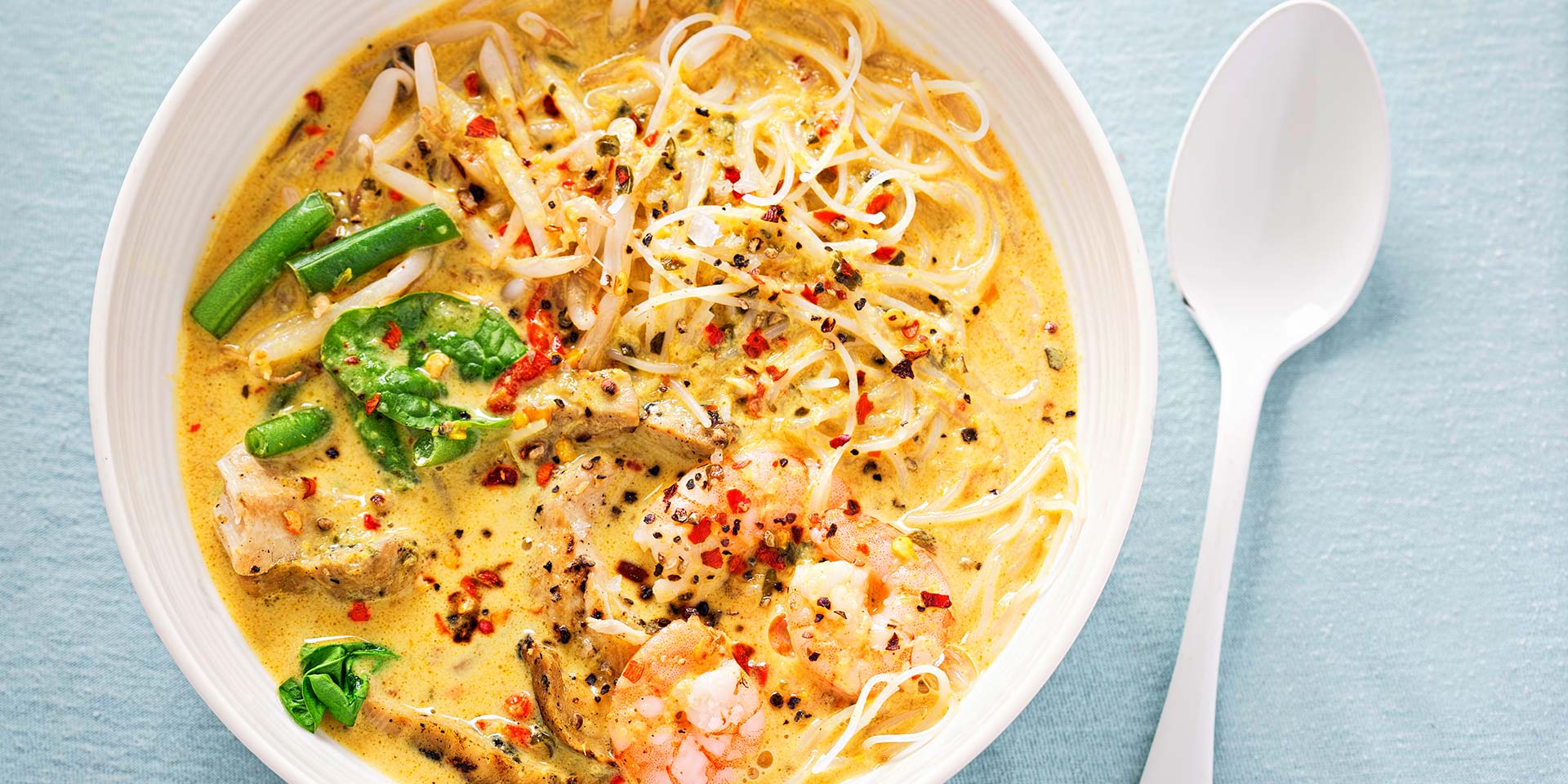 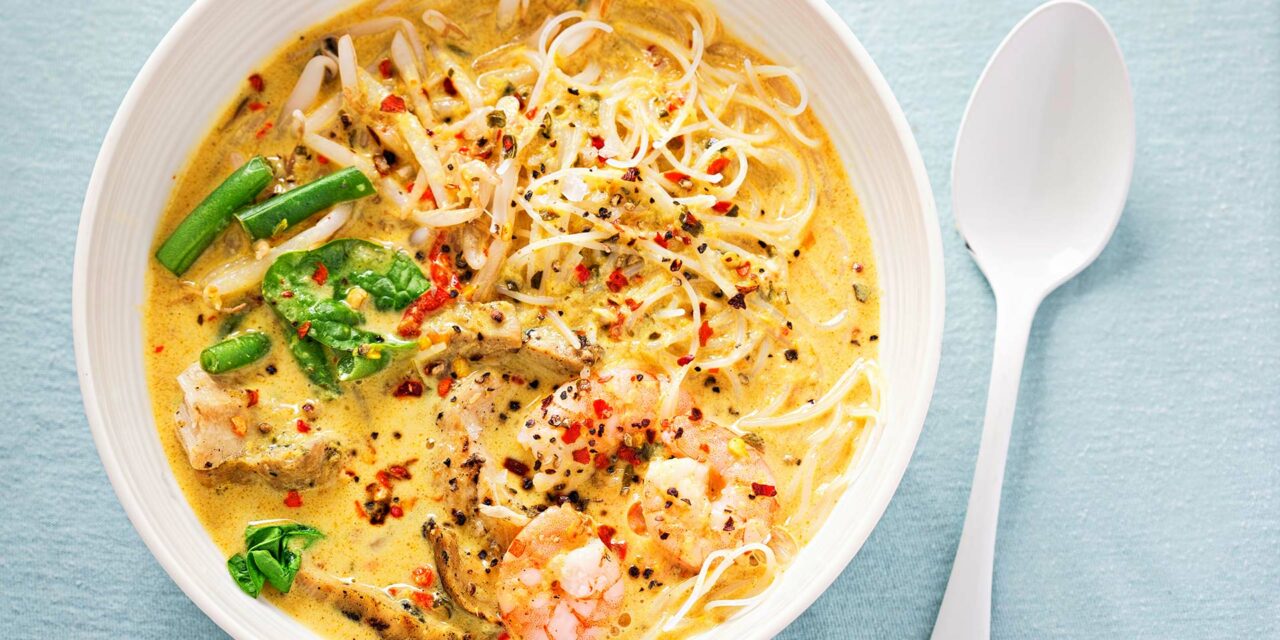 Katong hugs the east coast of Singapore island like a throwback to earlier days when the city-state was little more than a port linking the old spice road to the rest of the world. Once a sleepy fishing village, Katong is still a bit out of sync with the rest of hyper-modern Singapore. It’s an area with an eclectic past that in a way denotes the history of Singapore with its rows of restored shop houses painted in buttery pastels, the handful of colonial era bungalows that have survived changing tastes, and its fame as the best place to sample Singapore’s signature dish.

ABOVE: Houses of the Katong area.

By the early 19th century the Katong area had become populated by Chinese men who were involved in the lucrative shipping trade that was the financial engine of Singapore at the time. Known as Peranakans, these traders were responsible for creating the look of Katong, adding a Chinese influence to everything from local architecture to the noodle dishes served in the streets.

These Peranakan traders, men known as Babas, married local women who blended the noodle dishes their husbands grew up on with typical Southeast Asian ingredients like coconut milk, chili, and cilantro. Laksa curry was one result of this melding of cultures and quickly spread through the greater region; people were eating the rich, spicy noodle dish in four countries by the end of the 19th century, with slight modifications to each.

A steaming, aromatic bowl of laksa – from the Hokkien Laak Sua meaning spicy sand – which refers to the taste and texture of dried shrimp, owes its complex flavor to the hand pounded spice paste called rempeh. Taking its heat from chili’s, it’s briny funk from dried shrimp, its tang from blue ginger and a citrusy kick from lemongrass, rempeh is the backbone to a good laksa.

There are three main types of laksa; curry or nyonya – the local name for Malay women who married Paranakan men – from Singapore, Siamese from southern Thailand, Assam in Indonesia which replaces coconut milk with tamarind. It’s the nyonya style generally made with Boh Mee noodles, fish, cockles and more recently chicken though that can be most readily found around the world and which attracts foodies from across the globe to roam the streets of Singapore searching out the richest, most flavorful bowls of the ocher colored noodle soup.

Peranakan heritage has been experiencing a revival in Singapore of late evidenced by the restoration and transformation of its signature 19th century houses throughout the historical districts on the east coast into cafes, boutique hotels and chic bistros. Along with this enthusiasm for the old buildings has come a renewed passion for the food as the city state’s most prestigious restaurants now offer dishes that have always been hawker stall staples like laksa, chilli crab and chicken rice to it’s elite diners. As laksa has moved into Haute cuisine chefs have transformed the simple dish into postmodern deconstructions topped with reduction sauces and fusion plates replacing the original fat, flat noodles in gravy with fettuccine and laksa leaf pesto but for hardcore laksa enthusiasts no amount of flourish or embellishment can replace the steaming bowls of traditional nyonyon laksa served up by Uncles and Aunties in hawker stalls across the Island, especially in the Katong neighborhood.

Of these is the now legendary 328 Laksa which gained international fame after the owners schooled Michelin starred and foul mouthed celebrity chef Gordon Ramsey in a laksa cook off that was part of the 2013 Hawker Hero Challenge. Ramsay and his team went up against 328 Laksa in a head to head contest that had them both serving up a 1,000 portions of curry to a line of Singaporeans, some who stood in line for 12 hours to cast votes that gave Mr. Ryan Kor who runs 328 with his (actual) aunt the win by 19% putting them solidly in the running for best laksa in the country and therefore the world.

Mr. Ryan accepted the win humbly commenting that if Ramsey had more time and experience perhaps he would have been the better cook, but Ramsey fessed up to the defeat humbly admitting that he ‘got his ass kicked’.

Sitting down for a bowl of laksa on the streets of Katong, surrounded by the pink, pistachio and mauve colored Peranakan houses with a cold european style lager beer under the blaze of the equatorial sun beating down on the south china sea is a quintessential Singaporean experience. A country made up at the end of the trading routes that connected Asia for millennia with a bowl of noodle soup that borrows from cuisines across the continent.