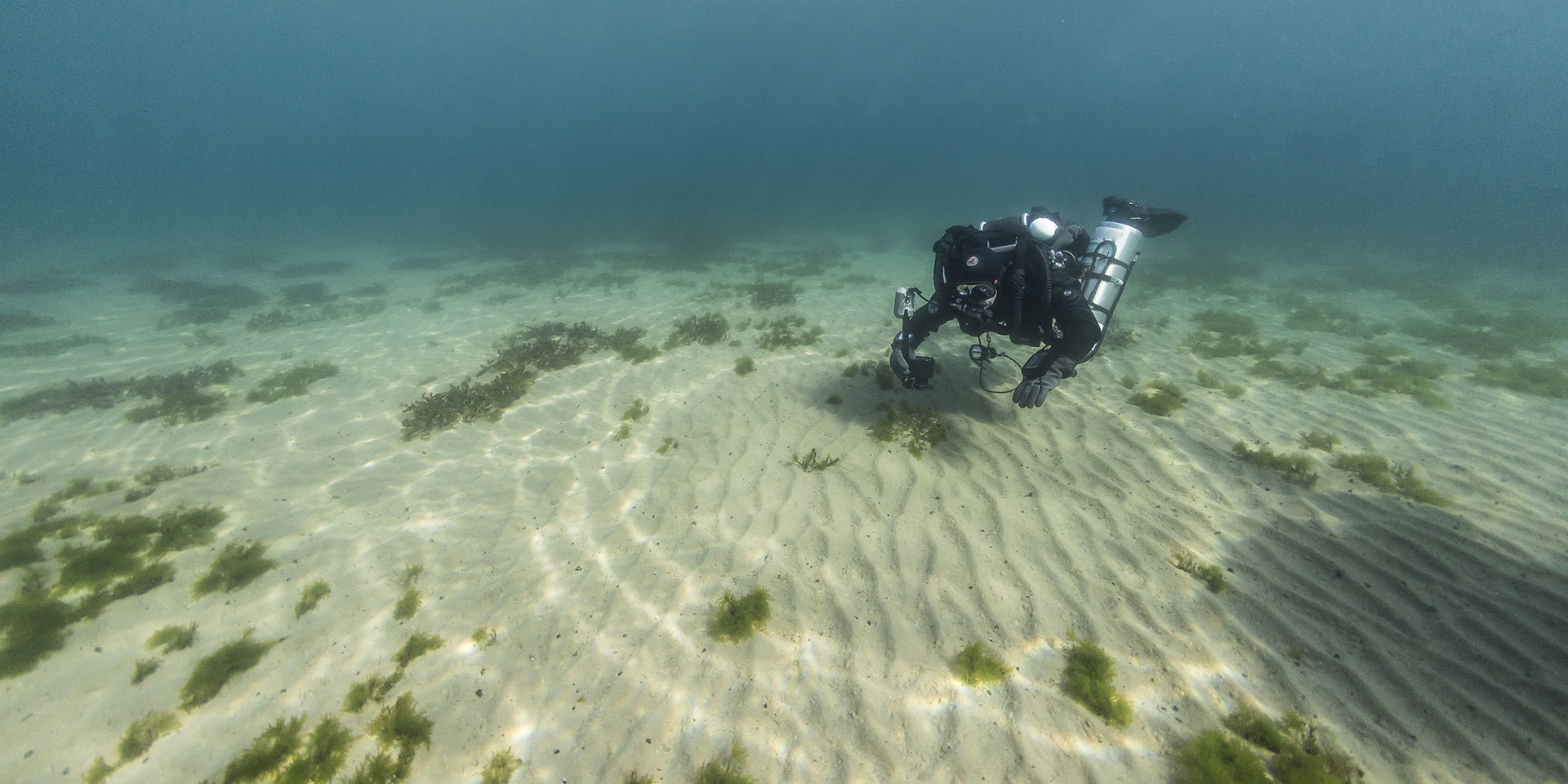 There’s no denying that Southeast Asia’s oceans have some of the best diving on the planet, but the continent’s freshwater dive sites are perhaps less well known. Of course, freshwater is always a little tricky: it’s murky, it’s seasonal, it’s often frozen solid. But, for those willing to make the effort, there are natural and man made wonders like nowhere else underneath the surface of Asia’s lakes and reservoirs.

From the clear, frozen waters of the world’s biggest lake to a little known Chinese reservoir with poor visibility, there are remarkable diving destinations in Asia’s freshwater pools.

ABOVE: A diver descending into the clear depths of Lake Baikal.

Dive fans will be familiar with Lake Baikal. There’s freshwater diving, and then there’s diving with 20 percent of Earth’s freshwater – as well as some of the most interesting and terrifying ice diving in Asia.

Summer diving is possible, to be sure. But, if you’re going to Siberia to dive, you’re going to want to get under the ice. The ice is more than four feet thick in places, dives can run as deep as 45 meters, and there are more than a dozen popular dive sites on Baikal. Water temperatures plunge below zero, and there are near-invisible sheathes of ice underwater.

ABOVE: The above video, from Global Dive Media, features divers among the frozen underwater world of Lake Baikal.

The normal diving season runs from January to May, and one factor for many would-be divers is the clarity of the ice rather than the water. In January, when the ice is only about 20 centimeters thick, travelers can see through into the waters below, and divers can see up – meaning you might be able to see where you parked your truck when you’re diving. March and April are high season.

As divers descend deeper, the surroundings take on a greenish hue and hundreds of Lubomirskia Baicalensis (sponges unique to Lake Baikal) protrude from the lake floor like a strange underwater forest. Indeed, Lake Baikal is the only site herein with diverse wildlife. From graylings to sponges, Baikal is teaming with flora and fauna large and small.

ABOVE: Lake Baikal’s massive area, containing more than 20 percent of Earth’s freshwater, supports all manner of life, including the Baikal seal.

The Baikal seals are obviously a big draw, and divers would be unusually lucky to see one underwater. But there are also giant amphipod crustaceans throughout, thanks to the highly oxidized water. These spiny little sea bugs aren’t pretty, but they are fascinating.

Vertical walls and canyons can be explored in the vast depths. Along the cliff walls ancient petroglyphs depict a feared river monster that many divers hope to find – or never, ever find. Whatever time of year you dive, the cool air and water sting the cheeks, but a dose of Russian hospitality (which invariably includes a shot of vodka) soon warms your insides.

ABOVE: A landslide in the early 20th century buried and flooded a valley in Kazakhstan, creating an underwater forest.

Just 80 miles from Almaty is one of the most otherworldly freshwater diving experiences to be had in Asia. Sitting amongst the Tian Shan mountains in the South of Kazakhstan is the 400-meter long Lake Kaindy. An earthquake in 1911 triggered a landslide. Consequently, the gorge filled with rainwater – flooding and covering the forest that lay there, forming the lake.

One of the benefits of freshwater diving is the calm water, but this dive is not for beginners. Divers craving a dip into the mountain water, no matter what time of year, will get a chilly reception. In the height of summer, the water can go below zero at a depth of 30 meters.

ABOVE: Above the water, the Asian spruce trees are long dead, but below they make for a fascinating forest.

This is certainly one of the less well-known freshwater lake dives, but there are some excellent videos out there. Don your tank, mask, and fins, and descend into the bracing waters, enveloped by dead trunks of Asian spruce trees rising from the turquoise lake like masts of sunken ships. Divers venturing further down will discover a ghostly submerged world of tangled roots and branches dripping in algae. It’s an underwater forest.

The winter months of November to March are most popular for ice-diving and ice fishing for the lake’s trout. The purity of the water offers incredible clarity. You can even see the underwater forest from above the water. The lake is difficult to access at the best of times, and the route becomes increasingly dangerous with the heavy snowfall of winter. Plan wisely.

ABOVE: A section of the Great Wall of China heading into the water at Panjiakou.

When is a door not a door? When it’s a jar. When is a wall not a wall? Well, when you accidentally pass over it, never knowing it was there, because it’s in an area flooded to provide drinking water for the victims of the tragic 1976 Tangshan earthquake in the wake of the death of Chairman Mao.

There’s little in the way of underwater forests at Panjiakou Reservoir, no ice diving, no wildlife – but there is the greatest architectural marvel in human history. Around 50,000 or so tourists traverse the Great Wall of China on a daily basis, but almost none get to see the impressive sections underneath the Panjiakou Reservoir.

ABOVE: The waters of the Panjiakou Reservoir are cold and murky. (Source)

Depending on the depths of the reservoir at the time, divers lower into the inky waters about 12 feet. And, down there in the not-so-clear-waters of a Chinese reservoir, the marvels of the greatest architectural marvel in the world unfold – with the aid of a flashlight.

This isn’t exactly the Maldives; these waters are cloudy and dark. A little deeper and both the visibility and the temperature drop. It’s about 20°C at the surface, but a chilly 7°C toward the bottom. But, the lower you go, the better the wall gets. Tunnels and wall features begin to emerge. The ruins, despite being built in the 16th century, still have an easily distinguishable sally port.

The waters are silent, shallow, and dark. It can be dangerous. Indeed, it’s not really, strictly, permitted at all times. It is, after all, a public drinking reservoir and a relic from the 1500s. Still, there are ways to get there, for those willing to give it a try.