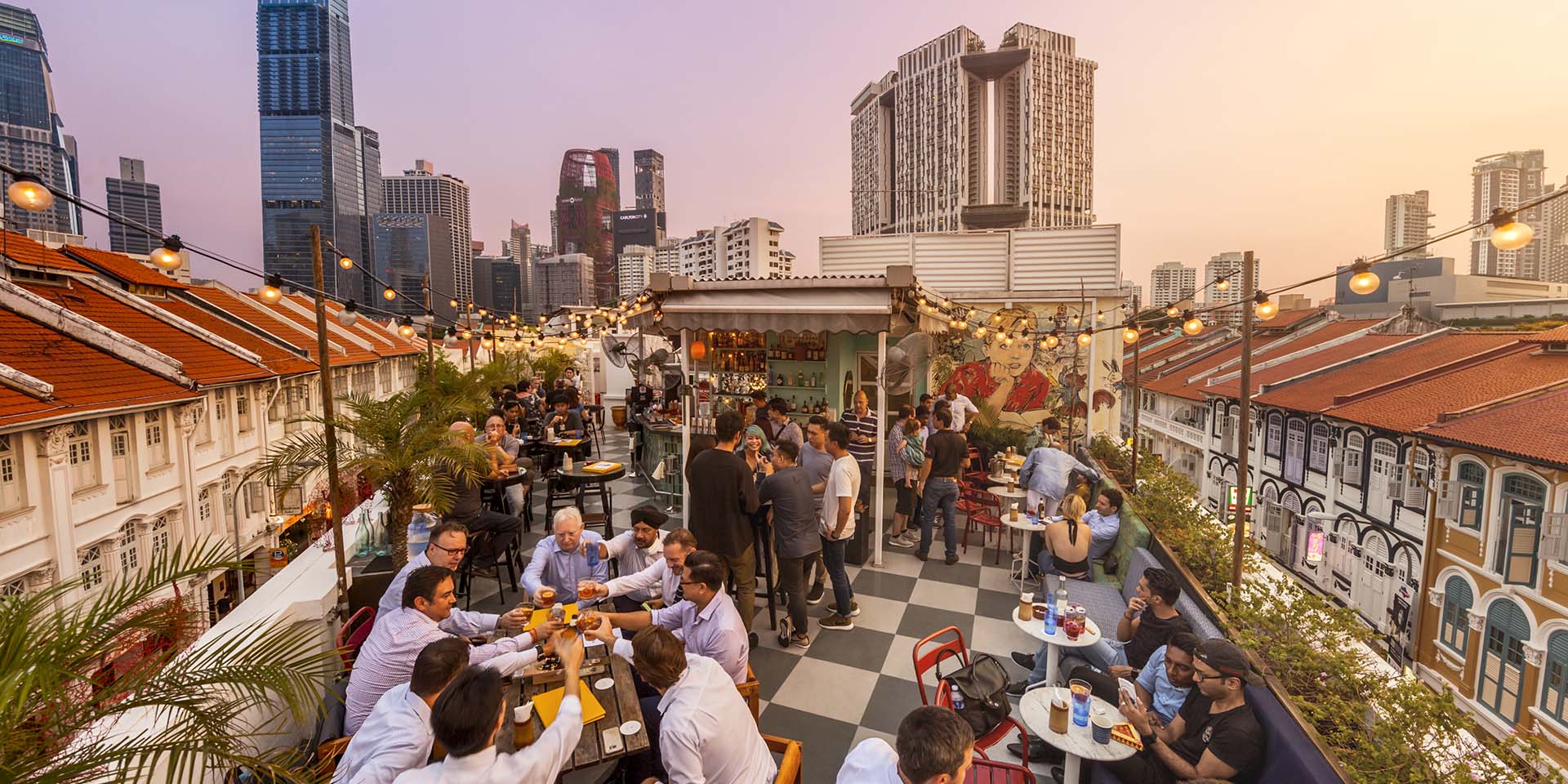 There’s much to consider for the thirsty traveler in Singapore. Rooftop or river? Beach or burgers? Quay or Marina Bay Sands? Quiet whiskey or biggest party in the hemisphere? Luckily, those who find themselves in Singapore’s downtown are never far from one of the city’s premier party districts.

Ann Siang Hill for the Drinks

ABOVE: On a rooftop in Ann Siang Hill, one of Singapore’s premier nightlife hotspots.

SEE ALSO:
– Hell and History at Haw Par Villa
– On the Right Track
– A Path for Every Cyclist in the Lion City

There’s no more obvious entry than Club Street. Somewhat of an architectural site of interest in its own right, Ann Siang Hill has the benefit of being near some of the most interesting sights in the city – including the Buddha Tooth Relic Temple. It’s also one of the best places in the whole of the Lion City for a fine cocktail in good company. Pluck features the talents of Chef Nicholas Teo as well as some of the most innovative cocktails in the city, such as the bourbon infused oolong tea. Wine lovers will want to check out the fine selection and steaks at Beaujolais, but those looking to party will want to hit up Gem Bar. Those who get bored with Club Street but want to keep the party going can easily walk on over to Keong Saik Steet.

Boat Quay and Clarke Quay for the River

ABOVE: The bustling Clarke Quay at night.

Both hugging the Singapore River, Clark Quay and Boat Quay have the best drinking near the Downtown Core. Quiet pub nights can be had at Boomarang Bistro & Bar north of the river in Boat Quay or at the delightfully low-key Draft & Craft on the other side of the river. For those looking to put a little nitrous in their nightlife, the live music at Crazy Elephant features some of the best rock and blues in Singapore, and there’s Latin dance music to be had at Cuba Libre Café & Bar.  For oysters, champagne, and one of the best views of the river in the city, check out Southbridge just off Elgin Bridge.

Holland Village for the Food

ABOVE: Food options from 2am: desertbar, a late night eatery worth the short trip to Holland Village.

Far from the city center, Holland Village is definitely better for the food than the drinks, but there are plenty of standouts for those not wanting to fight for space on Club Street or the Quays: Bar Bar Black Sheep and PARK (with truffle mac and cheese), for example. Wala Wala Café Bar has been a city staple for 20 years and the Baden Restaurant and Pub will sate appetites for both good German grub and beer. There’s practically no way to leave Holland Village with an empty stomach. Even those who like to drink until after midnight will find a happy home at 2am: desertbar, which serves fare from pastry chef extraordinaire Janice Wong.

ABOVE: The infinity pool at Sands SkyPark in Singapore’s iconic Marina Bay Sands.

Sands SkyPark at Marina Bay Sands is one of the most unique nightlife experiences in the city: 57 floors up, a slew of restaurants from which to choose, and the infinity pool is, frankly, insane. If there’s a better view to be had in Singapore while sipping fine drinks from the Lion City’s most iconic building, we haven’t heard about it. Up there diners will find Ce La Vi and Spago. Other nearby rooftop bars in the Marina Bay Sands area include the Kinki Rooftop Bar and 1919 Restaurant and Rooftop Bar. Those wanting to combine rooftop drinking with art should check out Orgo for a little cocktail chemistry.

ABOVE: Stage of ZoukOut in 2016. Set for December, the 2017 ZoukOut is set to be one of the biggest parties in Asia.

We were never not going to talk about ZoukOut. It’s not a kitschy cocktail or a German pub or an infinity pool on a landmark; it’s the longest running dance and music festival in Asia, and it is the nightlife experience coming to Singapore this year. Beginning on December 8th, this year’s ZoukOut is expected to draw 45,000 partiers to Singapore’s Silos Beach. This EDM free-for-all is not for the fainthearted, with the last day running until 8am. Last year featured the likes of Hot Since 82, Hardwell and Zedd, and Tokimonsta.

Hat tip to the Singapore Tourism Board for photography and advice.