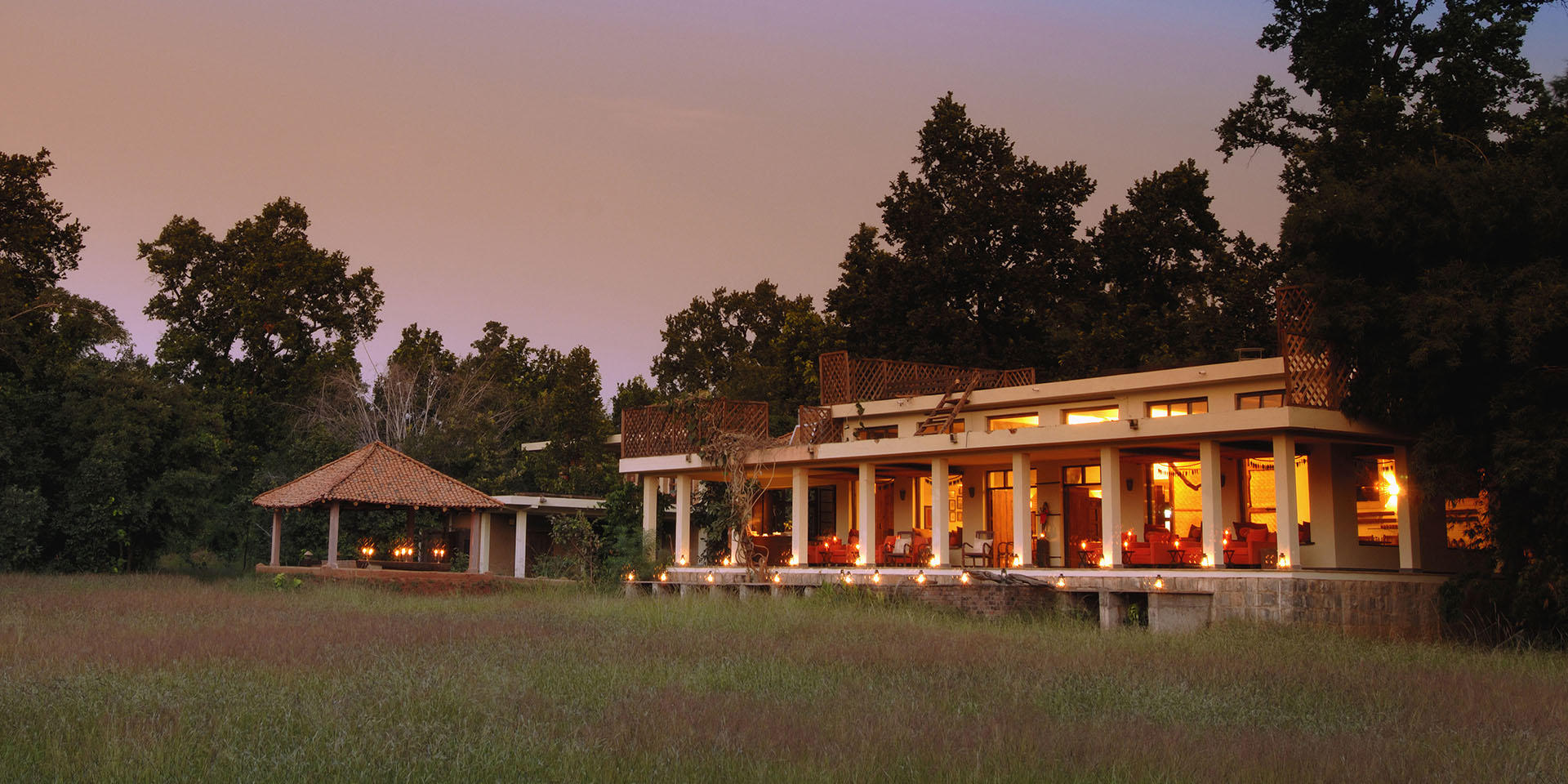 From the crocodiles and elephants of Nagarhole and Bandipur to the tigers of Ranthambhore, there are remarkably diverse options for exploring India’s national parks in comfort and luxury.

It’s not really possible to talk about luxury accommodations in and around India’s national parks without talking about Taj Safaris: Pashan Garh in Panna, Banjaar Tola in Kahna, Baghvan in Pench – nowhere quite touches on the Indian national park experience quite like the Taj. The Remote Lands favorite, however, is Mahua Kothi.

Featuring twelve suites, known as kutiyas, the Taj Mahua Kothi skirts a tricky line between luxury and rustic: mud floors with plush rooms, locally-sourced cuisine with expert preparation, and resort-style service without the resort kitsch. Those there for the decadence will want to try the mahua martini made from the mahua tree and enjoy stargazing with a hookah.

ABOVE: Visitors on a Taj Safari outing at Mahua Kothi.

Impressive as they are, few go to Bandhavgarh National Park for the rooms; the resident naturalist helps to provide perspective, but it’s the tigers that draw most visitors. Bandhavgarh has the highest density of Bengal tigers in the world, along with healthy sightings of sloth bears, gaur, and leopards.

ABOVE: Wind rushing through the jungle trees of Serai Bandipur.

Nestled in the forest wilderness of eastern Bandipur National Park, half of The Serai’s land grows wild, preserving the local habitat and providing for up-close wildlife experiences. mountain-view courtyard rooms, larger suites, and a log-cabin – all with verandas – make up this cozy set of rustic-modern residences.

The Sanctuary restaurant, Moyer’s edge bar, pool, and Oma spa complete the picture of a ‘less resort, more luxury retreat’ kind of hostelry. Experiences in the region include wildlife safaris into Bandipur, naturalist-led nature hikes, and mountain biking, with spa and dining interludes.

ABOVE: Rooms at the Oberoi Vanyavilas.

In the arid landscapes of Rajasthan to the northeast, the Ranthambore National Park seems more oasis than resort – though it’s definitely the latter. Nestled on 20 acres, The Oberoi Vanyavilas features as a launch point whence travelers can begin their search of the nearby Royal Bengal tiger sanctuary, and all trips to the Oberoi Vanyavilas will feature intimate wildlife encounters – which include the resort’s resident elephants.

ABOVE: Champagne outdoors at Oberoi Vanyavilas.

The Taj palace-style architecture features an observation tower on which to sip champagne and enjoy sunset panoramas. Here, active luxury-seekers can indulge in fine dining, Ayurveda, and yoga spas, relaxing by the pool or taking guided walks. Jungle jeep forays afford glimpses of the Bengal tiger and include a visit to Ranthambhore Fort. Chambal River excursion goers might also see the curious-looking gharial crocodile or the even more rare Ganges river dolphin.

ABOVE: Porch on one of the decks of the Evolve Back Karuba Safari Lodge.

In India’s southwest state of Karnataka, on the banks of the River Kabini, between both Nagarhole and Bandipur National Parks, the Evolve Back Karuba Safari Lodge beckons wilderness-loving luxury travelers. Modeled on the Hadis tribal villages, the “huts” have spacious modern interiors, with private pools and veranda views of the river savanna. If this fails to impress, the infinity pool and Ayurveda amenities might.

ABOVE: Pool at the Evolve Back Karuba Safari Lodge.

A selection of safaris get the curious close to Nagarhole’s flora and fauna. The forests and hillsides maintain a large population of Asian elephants, and predators like the leopard and wild dog are quite common. During the summer months, the largest congregation of Asian elephants in the world gather here, and in recent years, a bold family of the normally elusive Royal Bengal tiger has often been sighted. Boat safaris on the Kabini between both parks tend to be fruitful with wildlife, including the marsh crocodile.

ABOVE: Samode is right in the middle of the safari action.

The main lodge, restaurant, spa, and pool are dotted about natural settings. Safaris – which are strictly controlled to ensure habitat preservation – are led by the lodge’s jungle-savvy guides, Yadu and Anshu. During dawn or dusk excursions, monkeys, sloths, and Sambar deer can be spotted, as well as Nilgai antelope. Around the lodge itself, trails to explore on foot or bike hold their own more modest wildlife surprises.

ABOVE: With an array of accommodation options, the Fern Gir Forest Resort is one of the more isolated national park getaways.

Gir Forest National Park, on India’s western Gujarati peninsula, may be remote, but it’s one of the last strongholds of the Asiatic lion. Overlooking the Hiran River, Fern Gir Forest Resort features villas, cottages, and luxury tents set amongst lush gardens around a large pool. Interiors are modern and well-appointed, with restaurants and facilities one expects from a five-star resort. The resort can organize safaris to Gir National Park, and booking permits in advance online is recommended.

The semi-arid climate, forest, and savanna grasslands of Gujarati are prime conditions for big cats. Around 520 Asiatic lions now roam the sanctuary – only 20 in 1913 – as well as roughly 300 leopards. Dawn and dusk safaris allow for the best chance of seeing the big cats. Additionally, the Sambar deer and Chousigha four-horned antelope are relatively easily found, as are jackals, hyenas, and the adorable Indian fox. The park’s Kamleshwar reservoir is also a habitat for a thriving population of marsh crocodiles.