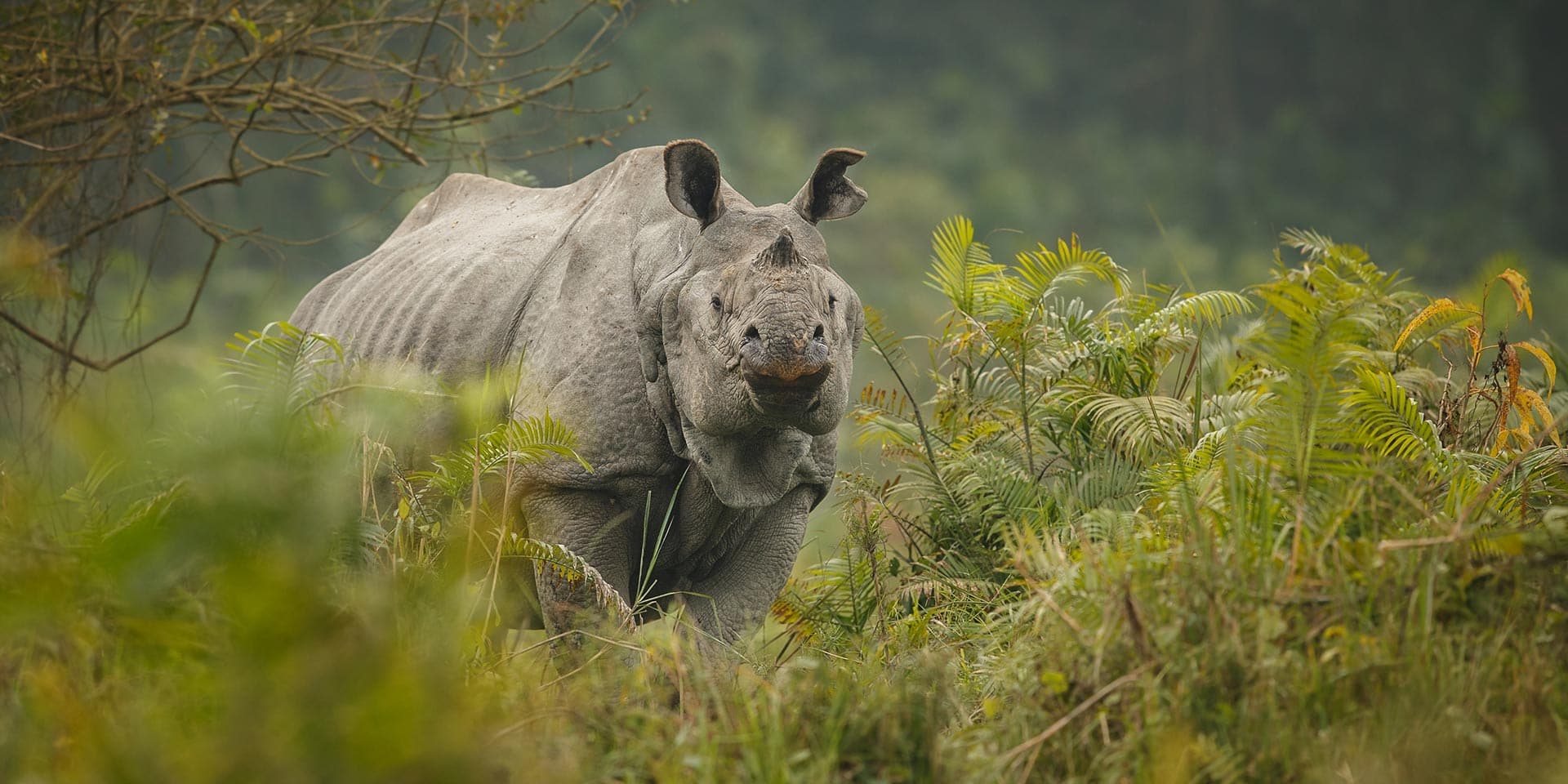 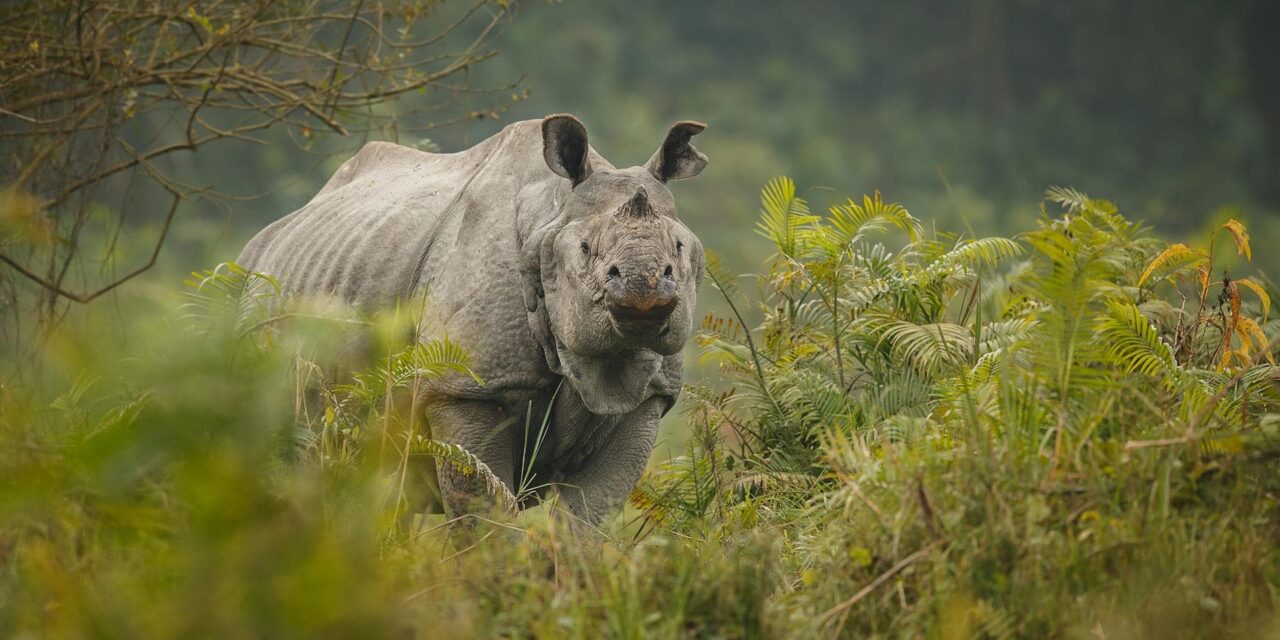 The former kingdom and current Indian state of Assam sprawls along the valley of the great Brahmaputra River. Known for its manicured tea estates, distinctive food, and hospitality the former ancient kingdom is squeezed in on all sides by the mountainous areas of Bhutan, Bangladesh, and the states of Nagaland and Arunal Pradesh. Barely ever more than 50 miles wide, Assam is home to unique wildlife preserves, the largest river island in the world, ancient temples, and a long equestrian tradition making it an adventure destination like no other.

In the now dead Ahom language Assam meant peerless and for travelers looking for unique adventure experiences it lives up to that lofty title. The state capital Guwahatti is known as the gateway to the northeast of India. Built up along the banks of the Brahmaputra River the city is a modern metropolis that serves as the jumping off point for most visitors to the area.

ABOVE: Sunset on the Brahmaputra.

Considered to be one of the great rivers of Asia, the Brahamputra is formed from the waters of the Angsi glacier high in the northern Tibetan Himalayas where it flows easterly through India and Bangladesh and it meets the sea at the end of its 1,100 kilometer course. The river has many names but its Indian name, Brahamputra, meaning son of Brahma, gives it a rare male aspect among bodies of water in India, perhaps due to the fierce rapids that dominate much of its course.

It’s those rapids along with the pristine surrounds of the river which attracts kayakers and rafters from around the world to paddle class IV and V rapids. A wide range of outfitters offer multi-day and even multi-week tours giving visitors the ability to splash, swirl, and jostle their way through as many as 200 kilometers of river basin jungle with overnight stops on sand beaches, surrounded by mountain vistas and traditional villages along the banks.

ABOVE: A man fishing in the Brahmaputra River.

Travelers have the option of transport up river on luxury cruise boats which transport passengers back to a more gentile time, with white-suited staff serving high tea on deck between stops at national parks, colonial era tea estates, the ancient Ahom ruins at Sibsagar, and Majuliu Isle.

ABOVE: Boat full of pilgrims work their way through Majuli Island.

Visiting Majuli Island is an adventure in itself. Still populated by tribal people who live in a world of handicrafts, the island offers no 5-star accommodation but plenty of genuine Assam cultural experiences. As most of the island remains unsettled it is known as a birder’s paradise and a prime destination for those with an urge to experience traditional festivals.

ABOVE: Scene from Majuli Island.

For some, visiting the 16th century Satras – religious centers where the arts, crafts, and traditions of the Assam are preserved – is reason enough to visit. For others cycling along the dirt roads and meeting islanders known for their hospitality is the highlight. Sadly, picturesque Majuli, which claims the title of world’s largest river island, is quickly eroding into the greedy waters of the Brahmaputra and may disappear altogether over the next two decades.

Refuge of the Rhino

A Nature Lover’s Guide to Meghalaya

There’s a plenitude of national parks in Assam which harbor a rich diversity of some of the rarest wild animals on earth but only Kaziranga and Manas parks provide refuge for the nearly extinct Indian long-horned rhino.

Kaziranga may have the widest diversity of flora and fauna of any preserve in India. Originally set aside to combat poachers in 1908, it was officially made a national park in 1974. Home to elephants, sloth bear, hog deer, Holock gibbons among a long list of other birds, mammals, and reptiles, it is especially famous for its abundance of the Indian long-horned rhino. Safaris run by the park offer the opportunity to view the animals in their natural habitat including extremely rare sightings of Bengal tigers. The park is accessible by air, road, and boat via the Bramaputra River.

ABOVE: An Indian long-horned Rhino in Assam.

Less accessible but equally as important for habitat and animal preservation is Manas National Park in the foothills of the Himalayas, straddling the Bhutanese border. A UNESCO natural world heritage, site it functions both as a tiger and elephant preserve. Though once home to a thriving population of rhinos, the parks herd suffered from cross border political strife and is now being re-introduced with animals from Kaziranga.

ABOVE: Elephants of Manas National Park.

The combination of staying at the national park paired with a night safari gives visitors the best opportunity to view rare and elusive birds and animals including the endangered golden langur. The jungle camp comprises 40 ethnic cottages at the edge of the sparkling waters of the Manas River, where meals are prepared by local people in conjunction with a local NGO project that manages the lodge.

ABOVE: Horses of Assam.

The long Assamese equestrian tradition lives on today in the form of guided, multiple-day horseback tours of the distinct areas of upper Assam. Tours generally include heritage tea estates where visitors stay in luxurious colonial era homes and sample the famed locally grown teas. Others explore the foot hills of the Himalayas and visit 16th century Ahom temples around the small but ancient city Sivsigar.

Like most areas of Southeast Asia, Assam experiences monsoons from late June through the end of July or early August. The best times for visiting are April through June for animal safaris and late winter, January through March, for rafting and kayaking. The mountainous, rivers, tea plantations, and sumptuous Assamese cuisine are available all year round.