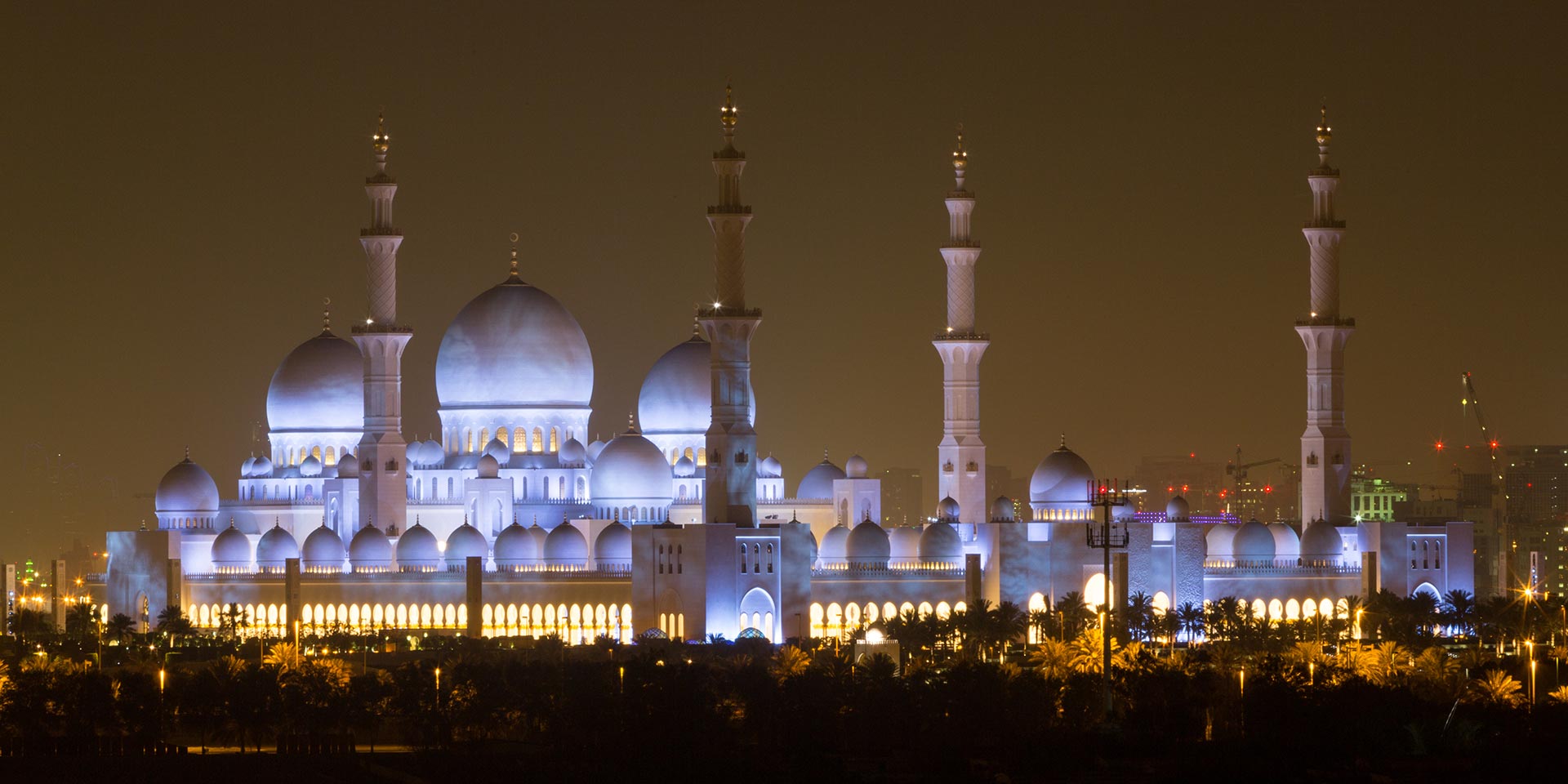 When most people think of the United Arab Emirates, what usually springs to mind is, of course, Dubai and Abu Dhabi. In fact, Emirates Airlines and Etihad Airlines have totally transformed the UAE into a major hub destination, bridging the USA and Europe with Asia and Africa. As a result, many tourists find they have a stopover in Dubai or Abu Dhabi for a couple of days on the way to their final destination, but rarely do they travel further afield to discover the layered and vibrant culture that is so diverse and colorful, brimming with ever-changing landscapes, myriad historical encounters and warm, inviting people.

On my trip, I wanted to visit these two key cities, but I really wanted to reach far beyond them to discover the true essence of the UAE and appreciate its rich history and cultural significance, not just the shiny man-made meccas for which they are known.

Predictably, my first entry point into the UAE was Dubai. My first impressions of the airport were less than great, but I soon realized that since I was not flying with Emirates Airlines, I did not arrive in the remarkable Emirates Terminal, which is leagues ahead of the lesser Terminal 2 in which I found myself. After making my way through immigration, I was excited to be off to begin my adventure. With the evening bringing darkness to the city, the glittering towers of Dubai were an exciting first sight to behold.

After a good night’s rest, I decided to head out and discover what Dubai has to offer. Shopping, museums, forts, glitz and glamor, souks and camels – I was looking forward to observing the juxtaposition between the old and the new and seeing how it could possibly blend together in harmony. My first stop was to visit the Sheikh Mohammed Centre for Cultural Understanding.  I was unsure of what it would entail but quickly found it to be a great introduction to the local Emirati heritage and traditions. With group sessions held over breakfast or lunch, you are guided through local culture with all questions welcome, even quite personal ones about Islam and Emirati culture were answered with warm smiles and a sense of humor, which I found particularly interesting. I walked away with a heightened understanding of the local people and could really appreciate what Sheikh Mohammed (who built the center in 1998) was trying to achieve- to build bridges between Emirati and expat cultures. I would highly recommend a visit here to anyone who has little understanding or mainly stereotypical awareness of the region.

Moving on, I ventured along the Dubai Creek, dotted with traditional abras (local boats), before being immersed in the Bastakiya area. Established at the end of the 19th Century, the area is full of historical buildings, museums, galleries, restaurants and shops abuzz with life – both local and foreign, either working away or engaging in awe at everything around them. A part of the Old City Wall can also be found here. Constructed in 1800 from gypsum and coral, the wall once surrounded the old town of Bur Dubai and included within it Al Fahidi Fort and the old Grand Mosque.

After a brief walk through the area and a tour of the Dubai Museum known for its interesting display of artifacts, handcrafted weapons, archeology and a glimpse into life many centuries ago, I headed to the Meena Bazar, Spice Souk and Gold Souk shining brightly with insane displays of gold necklaces and other jewelery, showing the wealth for which the city is known. A definite highlight for me was a local fish market, where all the workers were of Pakistani or Bangladeshi origin and were happy for me to peruse their plentiful fish displays, happily posing for photos with warm and welcoming conversation.

Next I ventured into the new. Choosing to stay at Anantara Dubai – The Palm for the evening. Two enormous artificial islands that were created in the shape of palm trees when viewed from above, The Palm Islands are jam-packed with big name hotels, shopping malls, high-end restaurants, and man-made beaches.

Waking up the following morning, I could not resist stopping by the Burj Al Arab, best known as the iconic hotel shaped like a large ship’s sail, looking almost as if it touches the heavens. A quick photo opportunity was had at this iconic landmark before driving onwards to the Madinat Souk. The Madinat Souk is a luxury shopping strip, set along the waterways with its abras and wind towers. Although high-end in nature, you cannot help but notice the vibrancy of a traditional Arabian Market. Looking around this laid back area, it’s hard not to feel the stifling heat when outdoors and it became very apparent as to why so many shopping malls and indoor entertainment areas are created- so you can take refuge!

With the temperature extremely hot, I decided to head over to the Mall of the Emirates, one of the largest malls in the world. With over 560 outlets, 90-plus dining options and a multiplex cinema, the mall is also well-known for its skiing! In a place where everything is over-the-top, it is hard to be surprised that in Dubai there is an indoor ski slope housed within a shopping mall. The place was bustling with locals and tourists alike skiing, snowboarding and playing with penguins. Yes, real life penguins.   It was a truly weird experience, but I definitely enjoyed cooling off for an hour while enjoying the slopes.

Before saying goodbye and heading to Abu Dhabi, I could not conclude my visit to Dubai without stopping off to view the Burj Khalifa, home to the Armani Hotel, one of my all-time favorite places to stay. The Burj Khalifa is the tallest building in the world and can now also claim the highest Observation Deck in the world at a startling 1,821 feet. The building is an impressive sight from above, below and especially from a distance: definitely one to visit.

Getting ready to leave, I took time to reflect. Dubai was everything that I expected it to be- extremely modern and manufactured, excessive wealth on show and with many western touches. All the stereotypes are here and on proud display – Lamborghinis, the Sheiks, the exaggerated architecture and of course the bizarre! This, combined with the history and the culture behind it, make Dubai a destination not to be missed.

For as much as Dubai has the image of glitz and glamour, it was quickly apparent to me that Abu Dhabi was a force to be reckoned with. Impressive skyscrapers adorn the skyline here too, but there was also a feeling of depth that was lacking in Dubai. Abu Dhabi is the capital of the United Arab Emirates, and also the largest and richest of the seven Emirates making up the UAE, giving strength to the opinion that Abu Dhabi will surely overtake Dubai in the next decade.

After a drive around looking at Abu Dhabi’s unmistakably modern and impossibly high skyline, I made my way to the iconic Sheikh Zayed Mosque. Considered the most important site of worship in the country, with up to 40,000 visitors at peak religious times, the mosque was established as a place to unite the cultural diversity of the Islamic world, with historical and modern values of architecture and art. The exterior itself is breathtaking, quite simply the most beautiful mosque I have ever seen. I walked around the vast exterior that covers 108,000 square feet, taking photos of this incredible structure before making my way inside. The rules, as expected, are extremely strict; headscarves for women and definitely no selfies or silly photos allowed. I actually watched the security guards make some Chinese tourists delete photos off their cameras before heading back out into the heat to discover more of what Abu Dhabi had to offer.

Mosques aside, the UAE is also well-known for its falconry. Steeped in history and tradition, the falcon was used for hunting and the falconer was revered for developing a strong bond of trust between himself and the wild captured bird. The skill of the falconer is still highly esteemed with the power and beauty of the falcon greatly treasured. Showing this continuing passion for the falcon within the Emirati culture is the Falcon Hospital, which has taken care of over 42,000 birds since its opening. Many wealthy Emiratis nowadays have falcons as pets as well as for sport, and this facility was set up to provide care for the birds, some of which cost more than $30,000 each. I decided to tour the facility with a small group of visitors and was engaged by a falcon doctor who gave us a demonstration of how they cut the nails and beaks of the birds while under anesthesia, which I found fascinating. I also got to watch these majestic creatures in the free-flight aviary.

For the rest of the afternoon, I drove around Abu Dhabi, first around Yas Island – a man-made isle that shows an incredible display of wealth, a rich man’s playground complete with private beaches, a huge Ferrari World theme park, a Formula 1 track and the Yas Viceroy Hotel. Passing by all these spectacular sights, it was clear to see this development was designed to give Dubai a run for its money!

Feeling the need for a more authentic and local flavor, I made my way down to the Shipping Docks to watch the workers, fast using up their energy in the searing heat – how they work in such a climate, I could never understand! After watching all their hard work, I discovered the vast Date Market. The UAE is infamous for its dates, with hundreds of plantations; with palm-fringed plants as far as the eye can see in many corners of the land, producing hundreds of varieties. After sampling more than a dozen varieties of these sweet sticky bites, my appetite was satiated and with a kilo under my arm to take back home, I set off for the cool and comfort of my hotel for a good night’s rest.

Dubai and Abu Dhabi remain two of the most intriguing places to visit, where you can play amongst the uber-rich, shop the finest of stores, dine in the most incredible restaurants or discover the past and unearth what it is to be a true Emirati, delving into the deep history and traditions.