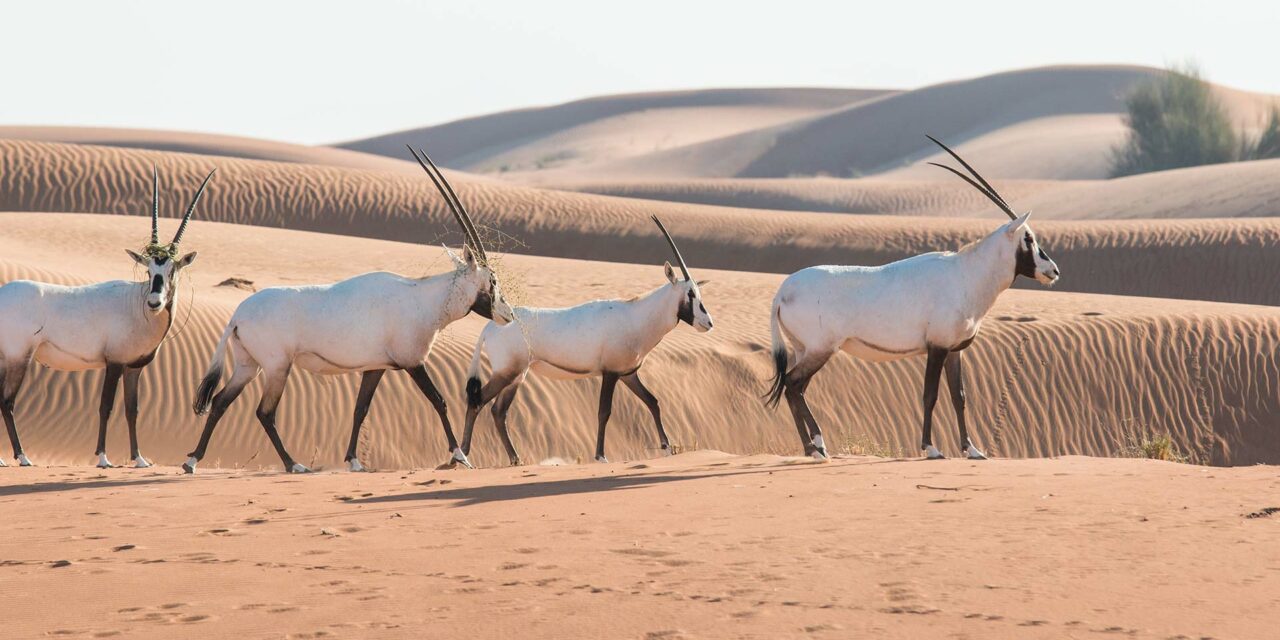 Arid deserts, skyscraper hotels, and some of the world’s most decadent restaurants: lost in that maze of dunes and modernity of the United Arab Emirates (UAE) is wildlife, creatures that live a life in search of an oasis – animals like the majestic oryx.

It must be said, however, that there are few places more hostile to life than the desert expanse that these animals call home. One might think that capturing an oryx in its natural habitat to be a bit of chore, but, just 50 miles from Dubai is a place, the Al Maha, where both intrepid travelers and the great beasts of the desert wastes can go for a bit of a rest.

Around the Al Maha Sanctuary are 10 square miles of living desert and rolling sand dunes from the comfort of traditional Bedouin rooms – well, exceptionally lavish Bedouin rooms – at the Al Maha Desert Resort & Spa. Visitors might even spot a few oryx from the vantage of the vantage of their luxury suites, not bad for an animal declared extinct in the wild in the early 1970s.

Bouncing Back from Extinction

The oryx is well adapted to surviving in the unforgiving conditions of the near desert, able to live for weeks without water and grazing on an eclectic mix of grasses, fruits, and tubers. With no natural predators other than the Arabian wolf, the Arabian oryx once formed herds that could number over 100 strong. But, as carefully adapted as it is, it was not prepared for the ascent of man.

Following a slow pushback of their stamping grounds, due to disease, flooding and periods of drought during the 18th and 19th centuries, these impressive herds were reduced to very few existing outside of Saudi Arabia. Arabian oryx numbers would continue to drop.

ABOVE: Arabian Oryx in a desert near United Arab Emirates

In the 1930’s, Arabian royalty and oil company executives, flush with newfound wealth and drawn by the striking hue of the Oryx’s pristine white pelts, began hunting them. At their peak, some of these hunting parties were known to be made of up to 300 vehicles. In 1972 the last Arabian Oryx was killed and the once abundant creature became extinct in the wild.

Hope, however, remained. In the early 1960’s the Phoenix Zoo in Arizona, USA, acquired a handful of specimens and in partnership with the World Wildlife Fund and the Fauna and Flora Preservation Society of London (since renamed Fauna and Flora International) they started the world’s first in captive breeding program – also known as Operation Oryx.

From those original animals the program produced 240 births, sent to zoos and reserves across the world. By 2011, the International Union for Conservation of Nature (IUCN) relisted the Arabian oryx from extinct to vulnerable – a first in the organization’s history.

One of the most decadent points from which one might view the natural wonder of the oryx is indeed the luxury and decadence of Al Maha, but there are wonders besides: Arabian horses, camels, falcons – all features of an oasis that keeps life pumping in the harsh desert.