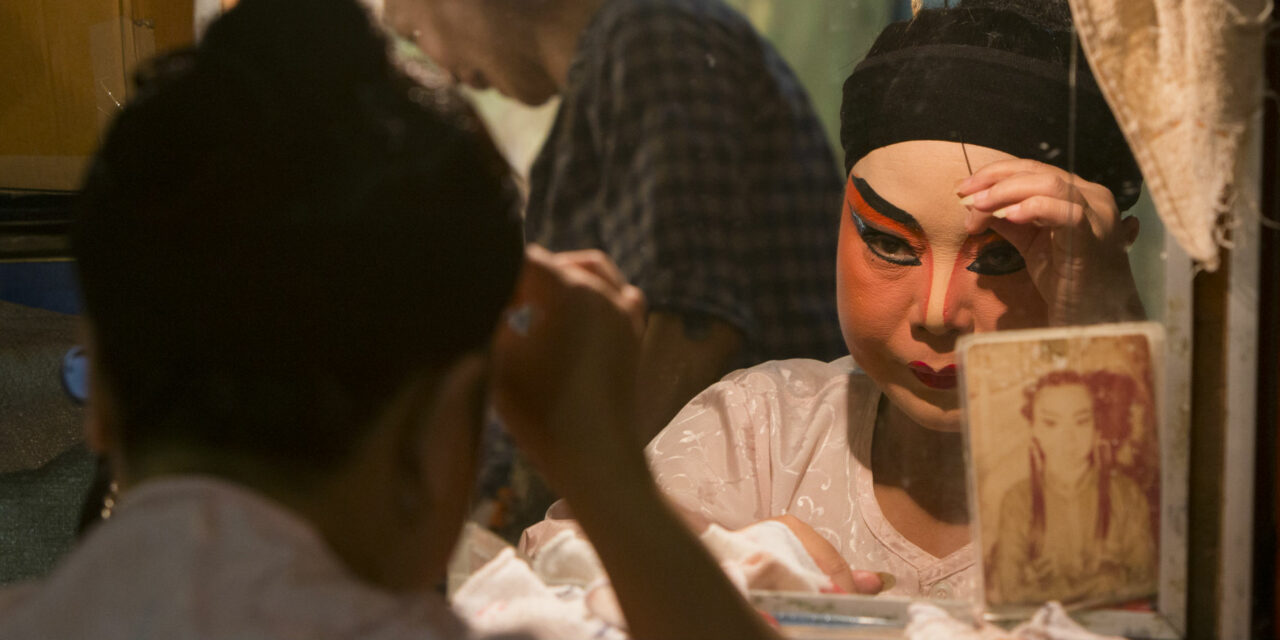 Surrounded by alleys of old car parts and streets stained with motor oil, the Chou Zhou Zhi Kong temple nestled on a bend of the Chao Phraya River is the backdrop for a strange cultural event in downtown Bangkok: Chinese Ngiew opera.

Known locally as Yaowarat, the teeming alleys of Bangkok’s Chinatown are known for being vibrant and bustling, filled with the comings and goings of travelers and roadside commerce. In the past the area’s backstreets and shophouses were known for more illicit trades, but for a few balmy nights the noise quiets for culture.

ABOVE: Performers check their traditional makeup before heading on stage at the height of this Chinatown festival.

This opera, part of the annual Tesegan Gin Jeh (Vegetarian) Festival, hearkens back to the influx of migrants from the Middle Kingdom in the 18th and 19th centuries, filling downtown Bangkok with a quintessentially Chinese celebration of food, fireworks, and dragon dances.

After the day’s festivities, as the sun begins to set, performers in the Talat Noi, or Little Market area of Chinatown, are just finishing their preparations.

Known for bright face makeup and flowing, colorful period attire, these performances act out both fictional and historical tales of noblemen and women struggling through ancient conflict, be it martial or romantic.

The shrill screams of the female characters as they reproach aggressive antagonists punctuate the air, and the audience is put into a trance by the din of traditional Chinese musical instruments – accompanied as ever by the thunderous crashing of cymbals.

ABOVE: The Thai-Chinese have been a part of Thai society for hundreds of years, with culture pulled from southern areas like Fujian and Guangdong.

Costume preparation takes hours and many can be seen carefully applying their makeup around the stage and audience area before the shows take place. The experience has a touch of the traveling circus about it: Curious spectators are free to wander behind the stage where the actors are dressing and preparing, living anachronisms in historical dress taking calls on smartphones and smoking cigarettes.

Huge devotional candles are lit behind the audience, and large spiraled stalks of incense are hung from the ceiling of the open-air roofed off area; a steady stream of devotees make their way to the altar of the temple opposite the stage.

During the days of the festival, the atmosphere in Yaowarat transforms into a modern Chinese fable

The celebration itself is, essentially, a quasi-religious one. During the days of the festival, the atmosphere in Yaowarat transforms into a modern Chinese fable. Tesegan Gin Jeh celebrants in traditional Chinese dress gather to take place in processions to pay respects to the Emperor gods.

The stores selling shark fin soup and shrines and temples devoted to Chinese deities bloom with color during the October festival. Yaowarat Road is overwhelmed with stalls selling all manner of vegetarian offerings, and the temples and shrines erupt into crowds of devotees enacting timeless rituals in honor of the Nine Emperor Gods.

The opera is very much an extension of that spirit. The players, who practice all year for these performances, go on into the night, echoing through the narrow cavernous passageways that surround the entrance to the performance area.

ABOVE: Be they martial or marital tales of conflict, this Bangkok Chinese opera is a quasi-religious ceremony filled with emotion and authenticity.

This display is one that goes back to the migrants from China around four centuries ago, when Han Chinese travelers came from the southern Fujian and Guangdong regions. The Thai Chinese are one of the few outside ethnic groups to integrate so effectively into the strikingly homogeneous Thai society.

Attendance is free to these operas, but latecomers should be forewarned that there are far from enough seats – first come, first serve – but there is always plenty of standing room for the anyone interested in seeing this truly unique spectacle of a culture within a culture, and a nation within a nation.