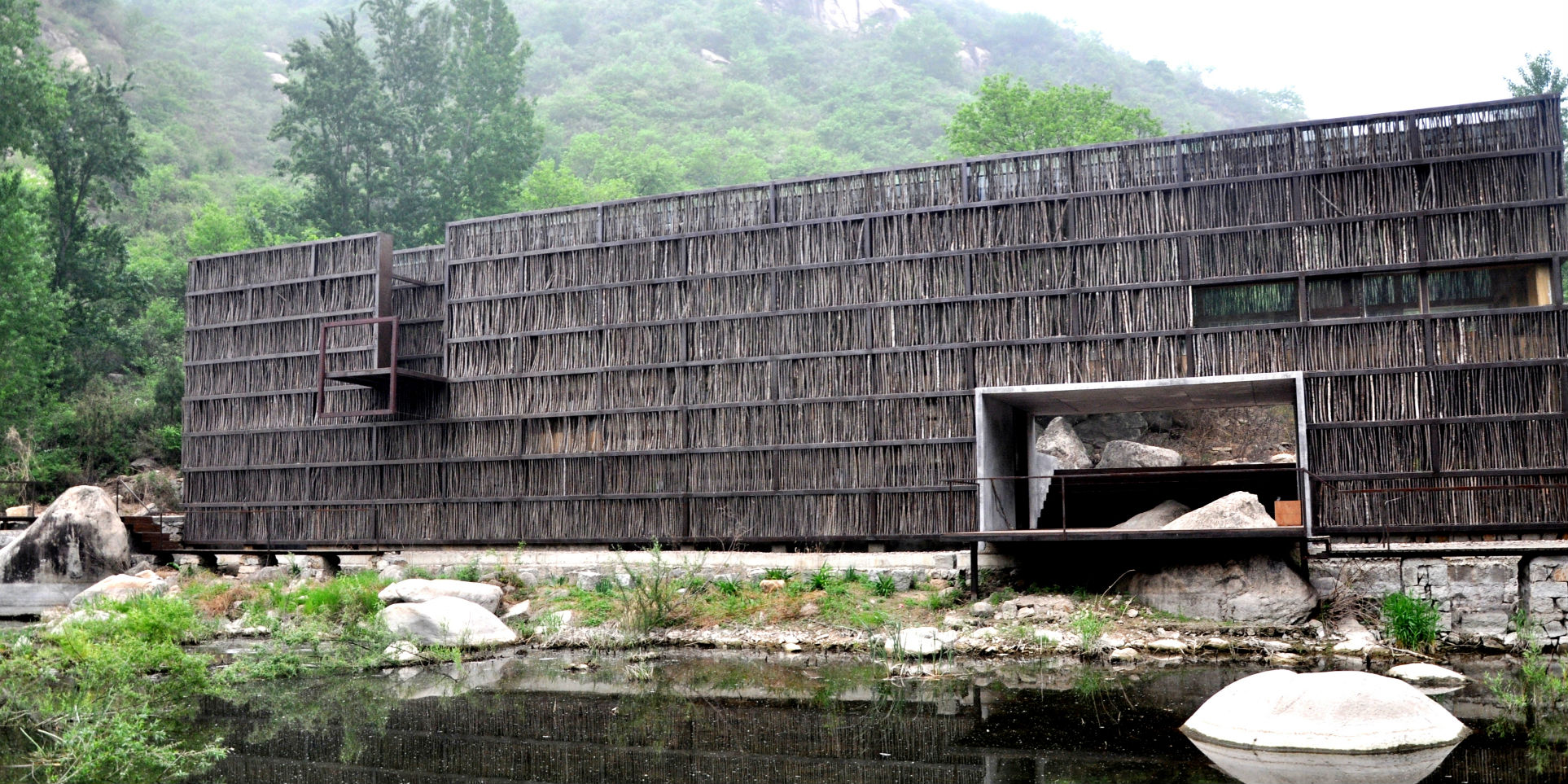 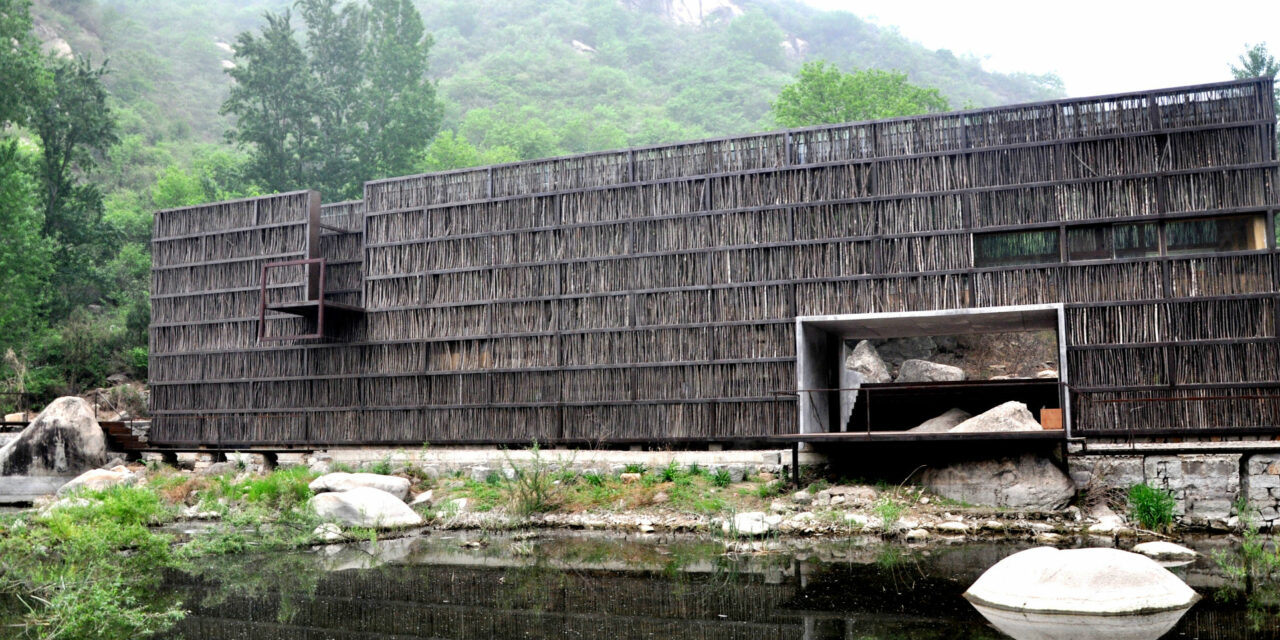 “It’s supposed to be here.” She stood from the seat of the black Chang Jiang 750cc as I sat hunched in the sidecar. Staring through the unusual late spring fog – a haze distinct from the infamous Beijing smog – we watched a brown box of sticks and glass appear in the forest.

She shut off the motor and tranquility filled Wisdom Valley in Jiaojiehe Village, the imposing Mutianyu section of the Great Wall of China just a couple dozen kilometers to the southwest: the Liyuan Library.

Not even 100 kilometers from the center of China’s capital stands a curious library, winner of the Moriyama RAIC Prize and built by master architect Li Xiaodong. It is, perhaps, one of the most visually arresting libraries in the world.

Resigned to my role of delivering withering put downs to the aggressive drivers, there is much to enjoy in the surprisingly pastoral scenery outside Beijing.

The roads are winding and populated by the aggressive city drivers from down south, so it was thought prudent that my girlfriend, a sidecar aficionado for more than a decade, do all of the driving. Also, I don’t know how and she wouldn’t let me.

Resigned to my role of delivering withering put downs to the aggressive drivers, there is much to enjoy in the surprisingly pastoral scenery outside Beijing. The dystopian hellscape of the city is well-known to those who tune in to the annual winter “airpocalypse” news coverage – which, if anything, is far too mild – but the roads leading north cut through sheer cliff faces and verdant spring valleys.

It isn’t easy to drive a sidecar, and it’s even harder to get away with driving one in Beijing, which has in recent years clamped down on the use of gas-powered bikes in an effort to curb the choking air pollution. It hasn’t worked.

There are, however, a number of options at local tour operators throughout the city that allow newcomers the opportunity to drive alone or with a group on tours throughout the city and beyond. Those going alone should be warned, however, that navigating the byways of Huairou District is harder than it sounds, especially considering the rock-bottom English proficiency.

ABOVE: Far from serene in most areas, Huairou offers a nature-centric getaway of paintball, horse riding, and ATVs just a short jaunt from Beijing

What the accommodations lack in service and soft beds, they more than make up for with charm: hammocks, cozy rooms, and quiet outdoor walks

Huairou, in short, is where Beijingers go to play – and fittingly odd. It’s a short trip from Beijing yet sparsely populated; it’s filled with natural beauty but subject to the same pollution as the inner city; there’s paintball and the Great Wall. Domestic tourists ride horses on paved roads and four-wheelers roar down the main roads.

The Curious Charms of North China

The drive goes up some pretty impressive hills for North China, the bike struggling up the mountains in first gear. The trick to taking the scenic route is taking Fanqi Road all the way to Jiaojiehe. Construction is a common sight, but the purpose is to build a more tourist-friendly resort next to the Beitaishang Reservoir.

While it’s possible to make the trip in one day, we decided to bed down in a local boarding house for the evening and hit up the library in the morning. The library maintains a regular stream of visitors on the weekend, so going early is the best option.

There are, of course, hotel and rural resort options, as Beijing builds outward in an attempt to lower housing prices and to give the wealthy weekend getaways, but more adventurous travelers will want to try the local fare and meet the villagers. What the accommodations lack in service and soft beds, they more than make up for with charm: hammocks, cozy rooms, and quiet outdoor walks.

ABOVE: The area brims with local guest houses and back roads, perfect opportunities to get to know the locals on the fringes of China’s most important city

The next morning we awoke excited for the library, but a little worse for wear from the hard beds; the final road leads up and down mountain passes, small motorized carts and trucks chugging building materials through the area. However, as we turned onto the last gravel path, all the city stress gave way to peace in Wisdom Valley.

Not far from the bustling city of Beijing, we found tranquility: running streams and mountain scenes.

The library itself was built to be in total harmony with nature; it uses no power, is designed to attract birds, and the sticks that make up the exterior are easily and regularly replaced. The entire construction budget for the project was around $140,000.

ABOVE: The Liyuan Library sits in a sparsely populated village amidst mountain streams

Inspired by a trip with friends to the village in 2010, Li built the non-profit site with money from the Lu Qianshou Trust Fund to provide the village with much-needed education resources, and hopefully a bit of tourism. It worked. The sparsely populated area had an unexpected kick start to its tiny tourism industry after the construction of the library as city hipsters who come for selfies hit up their hotels and restaurants.

A man in a high-vis jacket comes to unlock the library around 10am, so our early arrival allowed us to wander around the lake, the mountain streams, and rock formations. Once inside the natural, rough look of the library gave way to sleek, bright wooden surfaces – bright polished wood throughout an interior reminiscent of a Japanese puzzle box.

ABOVE: The puzzling interior of Li’s famous rural library

There are books in English for the curious reader who wants to spend the day staring out at the mountains and a security guard to keep you safe from all of the rampaging mountain greenery outside. If you want to take a book, they only ask that you leave a few more.

The library is more than a palliative to the belabored urban soul. It’s an example of how architecture can enliven a community. For our part, in the spring air as the flowers were beginning to bud, it seemed a shame to leave the solace of the mountains; with the roaring of the engine, the gravel crackled as we pulled out, back to the commotion of Beijing.