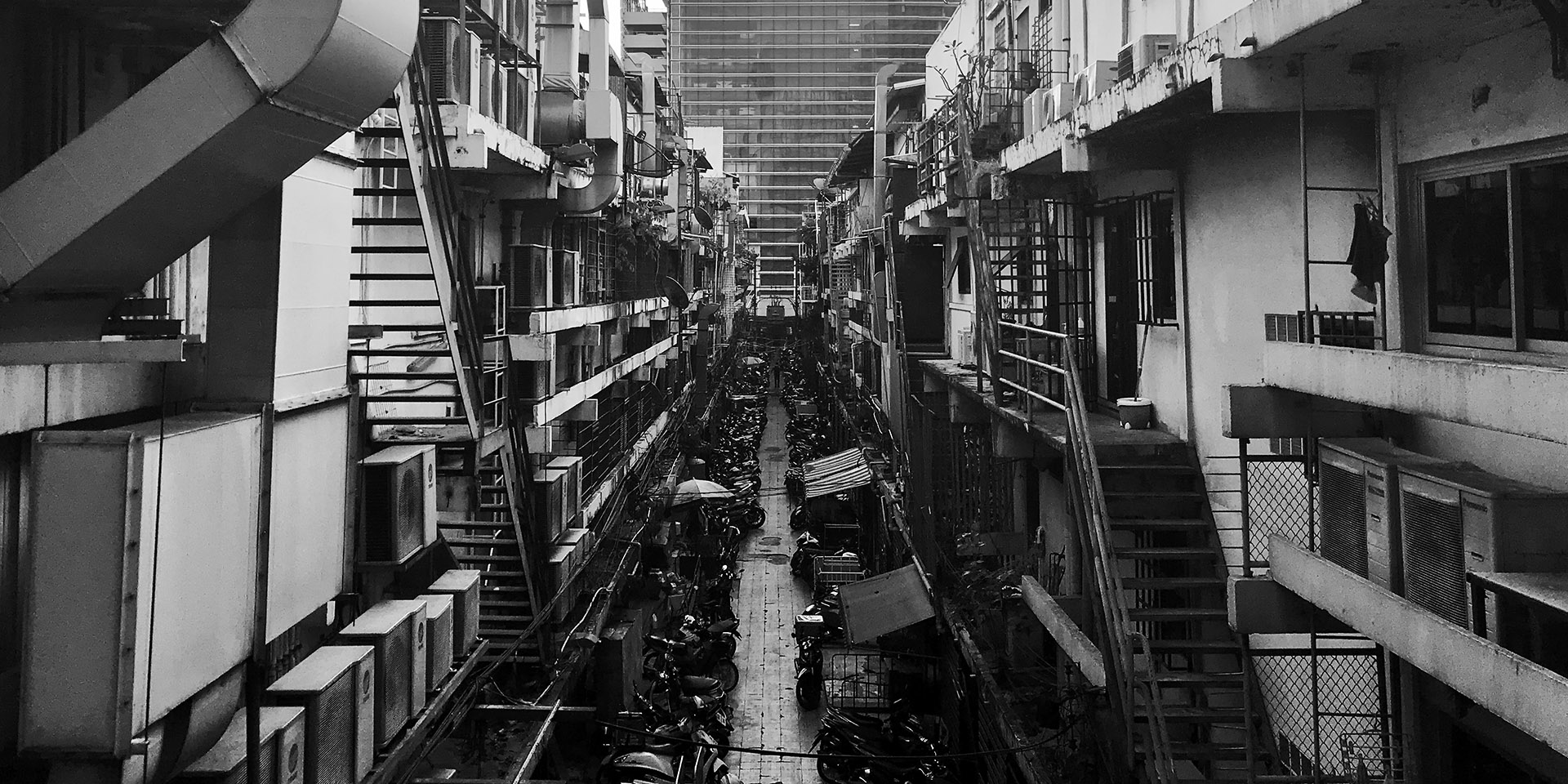 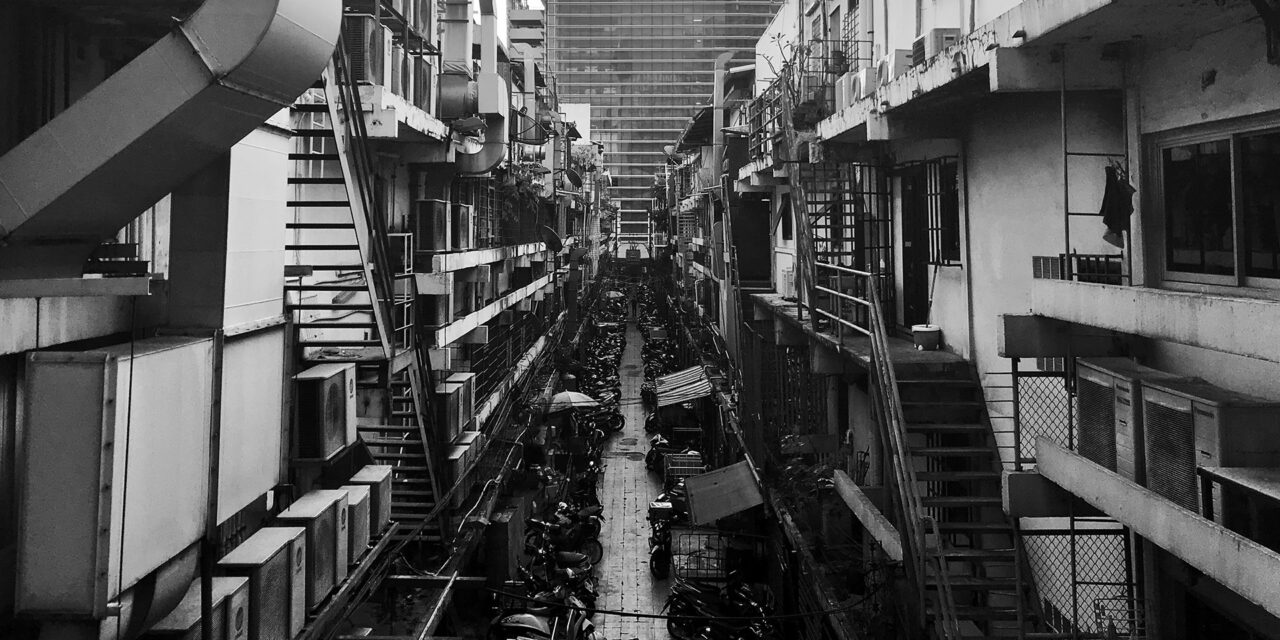 Crime writers and film-makers often squabble over what is meant by the term noir. The dictionary tells us noir is “crime fiction featuring hard-boiled cynical characters and bleak sleazy settings.” Here in Bangkok we have our fair share of sleazy settings and cynical characters, and some hard-boiled cynical fiction. The French will have us believe noir means “black” or ‘dark film.’ Shouldn’t we take their word for noir seeing they invented the term? Well, not necessarily. Etymological evolution crosses borders – words grow organically overseas fertilized by new understanding. And although noir often evokes the lights and shadows, blacks and whites, smoky streets and lamp-lit streets of the French auteur flick it isn’t the only definition in town.

A wise man once told me – crime fiction is about restoring order from chaos whereas noir fiction is about creating chaos from order. We are not in the library with the lead piping when we speak of noir in the Bangkok streets. Oh no, we are in a crazy city where anything could happen to anybody at any time. This is why I believe Bangkok, where I live and write, is a true noir city. A monster of a city, a huge bubbling 24 hour noir metropolis best explored in the small hours. Let’s take a look around.

ABOVE: Bangkok’s BTS and the streets below.

At street level the cool morning air brushes the sidewalk each day as Bangkok sucks in a wave of commuters, rudely ingests them through her various transit networks (skytrains, subways, buses), and coughs them out at their respective termini. In the evening this respiratory system is repeated in reverse as office workers head back via BTS to their condos in the sky.

Bangkok is a working city, a city with pulse, energy, and hope. It’s a sunny place for dark people, a city with both a past and a future. Her weather remains sweltering all year, the traffic refuses to budge, and life marches on with all the organization of a kicked over termite mound.

ABOVE: Traffic outside the Hua Lamphong railway station.

This is a lizard city, a chameleon metropolis; it changes day by day to camouflage with its surroundings.

Long ago I worked as a substitute English teacher in Bangkok, travelling across the city, usually by bus, early in the morning. It was during these dawn-time explorations that I discovered another world – a kind of netherworld that begins about 2am and lasts until around 7am. Skulking below the shopping malls and skytrains there’s a nocturnal society who live, for the most part, street-level, and prefer darkness to light. Some of these nocturnal folks are foreign, some are writers, artists, film-makers, some are further out on the fringes of society (as if that were possible) – all traverse the true gems of the Bangkok streets after dark with their eyes wide open like the nocturnal slow loris.

Let’s commence at the Hua Lamphong Railway Station. This Italian Neo-Renaissance transit hub was built by Mario Tamagno who also lays claim to the Nelson Hays Library and the Oriental Hotel during his flurry of activity a hundred years back. Mario was commissioned by the Thai government to leave his native Turin and develop Bangkok’s cityscape with straight lines and repetitive horizontal and vertical angles. His art-deco architectural accomplishments are some of the finest in Bangkok and impressive by any standard. The station handles 27,000 travelers a day and is set to soon become a museum when the central station is shifted to Bang Sue in 2019.

Bangkok and Beyond: 4 Days from the Capital to Kanchanaburi

Indochina’s Heritage Sites by Air, from Bangkok to Bagan

From Hua Lamphong it’s a short hop, skip, and a jump to Chinatown and into a little road called Nana. This Nana, not to be confused with its brasher brother on Sukhumvit, is one of the city’s up-and-coming stylish hangouts. There’s the quaint traditional TEP bar and the wonderfully decadent looking TOT bar that serves as Bangkok’s premier gin palace. A couple of shophouses down the much loved Bar 23 hosts art installations and occasional live bands. These street-level haunts qualify as the Neo Noir of Bangok. This is a lizard city, a chameleon metropolis; it changes day by day to camouflage with its surroundings. The internal design of these inner-city drinking dens inspire the creative souls who make the city theirs after dark.

Parting from Chinatown it’s a short walk over to Chareon Krung Road and to the Sathorn Unique Tower that haunts the city with crumbling menace. Popular with urban explorers and exponents of dark tourism this 47-storey relic dubbed the Ghost Tower built on a former graveyard was brought under scrutiny following the developer’s alleged involvement in a plot to kill the president of the Supreme Court. Dark days followed as the financial crash saw the end to the project. 2014 saw a Swedish national commit suicide here by hanging himself on the 43rd floor.

ABOVE: Atop the graffiti-addled Ghost Tower in Bangkok.

The Ghost Tower is just one of the many skeletons that fell victim to the financial crash of 1997 and among these forgotten relics are, of course, the old cinemas. These theaters began life showing local films before switching to Hollywood blockbusters then at the tail end of their existence stooped to showing softcore pornography to pop-eyed cinema-goers. While some cinemas around the city stand in dilapidated splendor others have been resuscitated. The Prince Heritage near the river has begun a 4th incarnation as a concept hotel. The old stage remains in the restored cinema building, along with a few rooms behind the screen and a bunch of dormitory digs. Although in its infancy Prince Heritage will hopefully evolve into the perfect venue to view late night film screenings while sipping one of their signature cocktails and considering traveling back east through the city to decadent downtown.

A post shared by Prince Theatre Heritage Stay (@princetheatreheritagestay) on May 21, 2018 at 5:01am PDT

A post shared by Prince Theatre Heritage Stay (@princetheatreheritagestay) on May 5, 2018 at 5:01am PDT

A post shared by Prince Theatre Heritage Stay (@princetheatreheritagestay) on Mar 3, 2018 at 5:31am PST

Trading Rockets for Rain in Yasothon

As we pass from the river towards Silom and the business district we can’t help but notice the homeless in Bangkok. Blind-ballad-singers quiver tunelessly into microphones in exchange for a commuter coin. Cambodian amputees rattle tins as a legless man pulls his awkward burden along the pot-holed sidewalk. My own stories and books often feature the struggle of the underclasses in this difficult, challenging, yet welcoming metropolis.

Ten or so years back I stumbled upon the CheckInn99 between Sukhumvit 5 and 7 and decided to employ it as the meeting point for an international artistic community. The bulldozers have since sadly moved in and the old CheckInn99 and The Tunnel behind it are now no more. The spirit of the old CheckInn lives on in Soi 33, but some of the old faces have sadly moved on, some no longer with is. The constant here is change. Every night the stage is set for a new adventure in South East Asia’s capital of noir and places come and go to accommodate the revolving cast and crew.

ABOVE: The lights of Bangkok’s The Tunnel.

No Bangkok Noir Tour would be complete without a mention of the Red Night Zones. In Bangkok there are three of these catering to tourists, the oldest being Patpong, followed by Soi Cowboy and Nana Plaza. While the atmosphere inside most of the go-go bars is for the most part  desperate and sad, the surrounding streets hark back to an era of Bangkok past – neon lights and cutthroat alleyway conjure up a bygone world centering around the hustle of the Klong Toey port and the nearby markets. Best bet after the bars close at 2am is to hit one of the street-side bars that pop up around midnight and stay open long after the usual places have given up the ghost.

ABOVE: Patpong market in Bangkok.

Hundreds of bar workers and tourists gather on stools and discuss the impending apocalypse. The mood here is much lighter than in the bars and much realer. Night workers off the clock soften up tourists and expats, digital nomads, tech start-up entrepreneurs, freelance journalists, and wayward English teachers.

As morning approaches there’s a certain magical texture to the city’s light, a heavy yellow polluted film of cool dust particles covers the city like rain mist. And as the last crumbs of night are digested the monster opens her eyes as the machinery of day once more stutters into action. The office workers and the students climb aboard trains and subway systems, without any real knowledge of the night that had just passed beneath them.