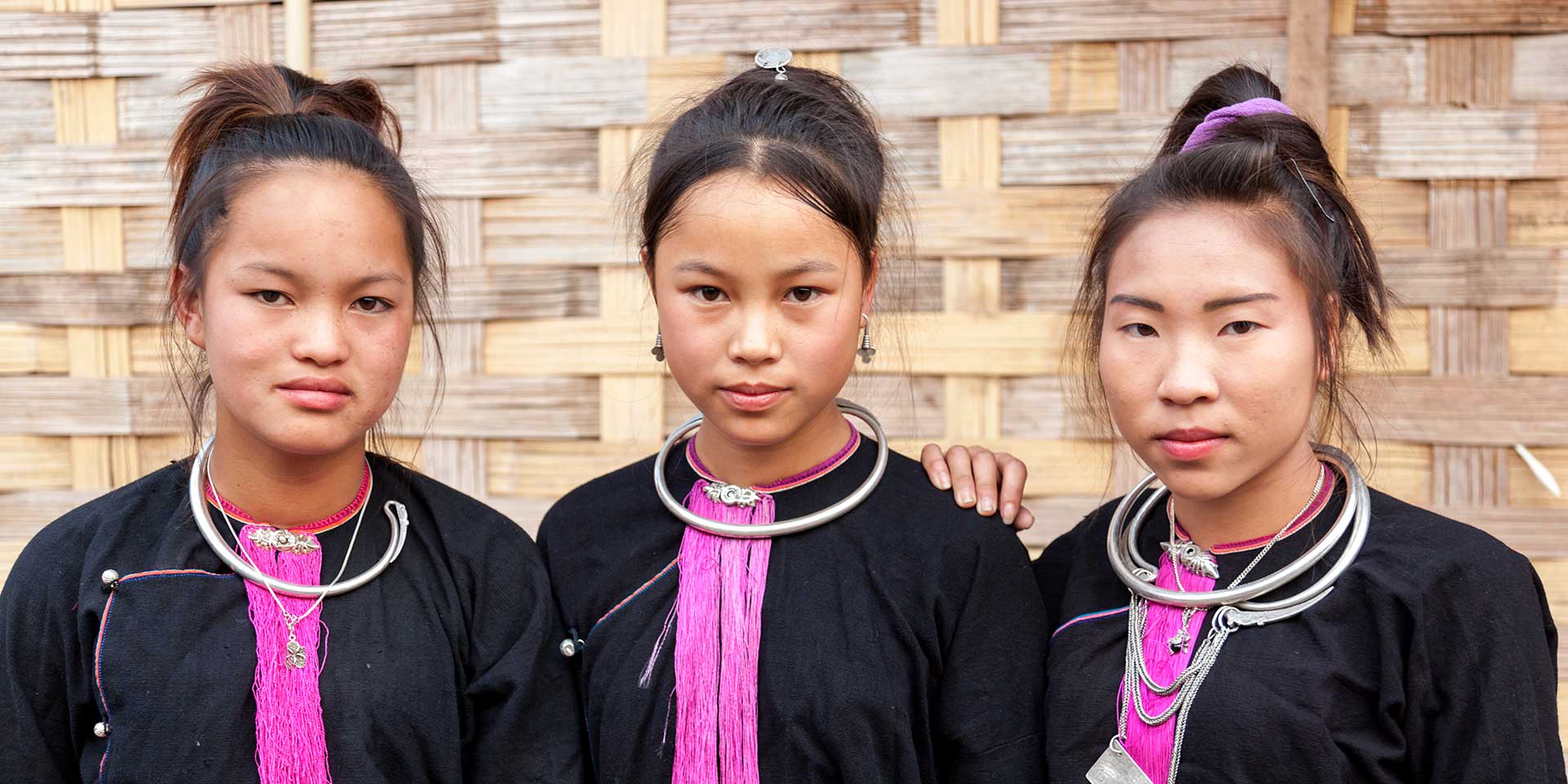 Often described as ‘Asia’s forgotten country’, remote areas of Laos remain untouched by the demands of modern-day life and retain their century-old traditions. In the indigenous Lao people is where the country’s true beauty lies and they define the region as well as its pristine mountainous and landlocked landscapes. I was lucky to capture some unforgettable scenes and encountered remarkable hill tribes on my journey, making this one of my favorite destinations yet.

After a one hour flight from from Vientiane, I landed in Luang Namtha, the largest city in the Luang Namtha province. Surrounded by a rice-bowl valley, vast forested canopies and a backdrop of ridged mountains, it’s evident why Laos has earned the reputation as the ‘Switzerland of Asia’.  From here, we set off on the 20-minute drive to the traditional Lantan village of Sok Touk.

The people of the Lantan tribe are well known for their paper-making skills and produce large quantities each year. They are also renowned harvesters and, arriving at 5 pm, we noticed most of the local villagers returning from their farming duties, creating a bustling atmosphere. As ‘outsiders’, our arrival hadn’t gone unnoticed and a dozen smiling children followed my every move. These curious little Lao were incredibly shy at first until intrigue overwhelmed them. Stopping at a local  home, we watched as a local woman chopped up some banana tree trunk to feed to the pigs and took advantage of the opportunity to engage her in some conversation.

The best guest houses in Luang Namtha are the Phou Lu 2 and Boat Landing, and as dusk descended over the village, we retreated to our hotel for the night.

Luang Namtha is one of the more popular tourist destinations in Laos and provides a comfortable base –  although I preferred to head out of the city to see more remote minority tribes, which I had planned for the following day. Within the Luang Namtha province, there are four fascinating hill tribes – the Lantan, Yao, Akha Eko and Khoui as well as the more common Khmu and Thai Lue.

Leaving the hotel at  7:30 am, we departed towards Muang Sing. Once on the infamous opium trail, the destination borders Myanmar and is almost touching distance away from China’s Yunnan province. Along the way, we spotted some Akha villagers selling a slow lorris – a small primate indigenous to Southeast Asia with large amber eyes. Although an endangered species, the minority people commonly kill almost any animals they can find, selling them to Chinese workers in the area. Upon seeing the beautiful creature with terrified eyes, and knowing its ultimate fate, I decided to buy it. He was doomed if I left him behind, so for the time being he was our fuzzy, wide-eyed companion.

Passing a small Hmong school, we decided to stop and meet the students and teacher. As a village school, all grade three, four and fives shared the same class and we entered as they were learning the Lao language. As with the encounter in the Lantan village, the children were mesmerized upon seeing a foreigner enter their classroom and it was an enjoyable experience watching them learn.

Our next stop was at a Khoui minority village, where the Khoui women are known for their unusual hairstyle – long hair tied in a bun and held with a comb – and it wasn’t long before we spotted two elderly women in traditional attire. Elegant yet extremely shy, we spoke with these women, and eventually after much convincing they allowed me to take some photos.

Wandering through the village, we entered a home and saw two elderly men laying down and smoking opium, a practice that is still common in this area. We were elated when one of them volunteered to play some traditional music for us. The experience was quite comical, as he was still high from the potent substance he was smoking but proceeded to play two different forms of ‘Khene’ – a Lao instrument made from bamboo resembling a cross between a bagpipe and a flute. He started to spin around in traditional style, but at this point it was evident that he was too wasted to continue.

After lunch, we headed towards Muang Long. This remote area is concealed by unspoilt vistas with vivid hues all round, from the energetic greens of the jungles to the deep maroon of the Nam Ma river that runs along a wall of limestone cliffs. We visited a nearby Akha Eko village, rarely visited by foreigners. The majority of Akha Eko tribes live in northern Laos and make up approximately 1.4% of Laos’ total population. Most of the hill tribe villages in Northern Laos are still animist, and the Akha proudly display spirit posts and gates at the entrance to their villages, with their belief in spirits firmly ingrained in both their culture and actions. Although the Akhas don’t have any written history, they do have a rich oral history of their culture, passed down through generations. We met an elderly lady in her home and took some photos after a long chat. I quickly noticed that the majority of the villagers didn’t speak Lao and communicated only in their Akha language. Luckily, some of the young boys had learnt Lao in school and accompanied us to translate.

Entering another home in this beguiling village, I had a chat with another lady who welcomed us with some traditional tea. At first, she was reluctant to have her photo taken, although after seeing the first photo I took, she was happy to pose for more. Here, I learnt that it is common for Akha women to walk around topless with no shyness, in direct contrast to many of the other places I have visited. We then stopped at the home of an Akha man, who, obviously inebriated, invited us into his dark house for a chat and to sample some homemade whisky. Before heading back to Muang La, we spotted a woman weaving white fabric on a traditional loom. It was as though we had just traveled back in time and stood watching her, captivated by her competent technique.

On the road, we visited a small shop where an Akha blacksmith was busy crafting a metal headdress for his wife. I discovered that in Laos, the Akha women typically use French silver coins, many of which are from the 19th century. Arriving back in Muang Sing, we checked back into the Phou Lu 2 resort for the evening and unloaded our slow loris to rest.
The next morning, I quickly realized that the slow loris had escaped through an impossibly-small gap in its cage. Being a ‘slow’ loris meant that we found it high up in a tree just a few feet away. Fearing for its safety in the middle of town, we recaptured it and packed it in the truck. It was a crisp morning at around 7:30 when we headed to a Yao village just 4.5 miles away.

Within a typical Yao village, houses are built using bamboo and wood and are rectangular in shape. The Yao people have a unique vocal talent, passed down through the generations, and song is an essential part of their life. Their songs include stories about their history, legends hidden within their culture and a way of expressing their mood.

Upon arrival, we met some Yao women, holding their babies and adorned with traditional Yao hats. We met with the village shaman, who told us  how he chants at the local festivals. His wife was dressed in splendid traditional Yao clothing and was happy to pose for some photos. Walking further into the village, we met another old woman, and after a chat in her home, we discovered that this woman was a cousin of our driver. We were excited to find someone who would sing traditional Yao music for us, and were introduced to another woman who happily sang for us. A wonderful moment quickly turned into an amusing one, as a rafter of six turkeys insisted on running over to her, compelled by her singing.

With a one-and-a-half-hour drive to Luang Namtha, we had time to reflect on the unique people we had met during our brief visit in Laos that had left quite an impression on us. We handed the slow loris to our local guide who was going to trek deep into the national park the next day to release it (although it now felt like part of the crew!). Stopping at my favorite restaurant for lunch, it was time to get back in the car for a long drive to the Phongsali province and the next stage of my journey.