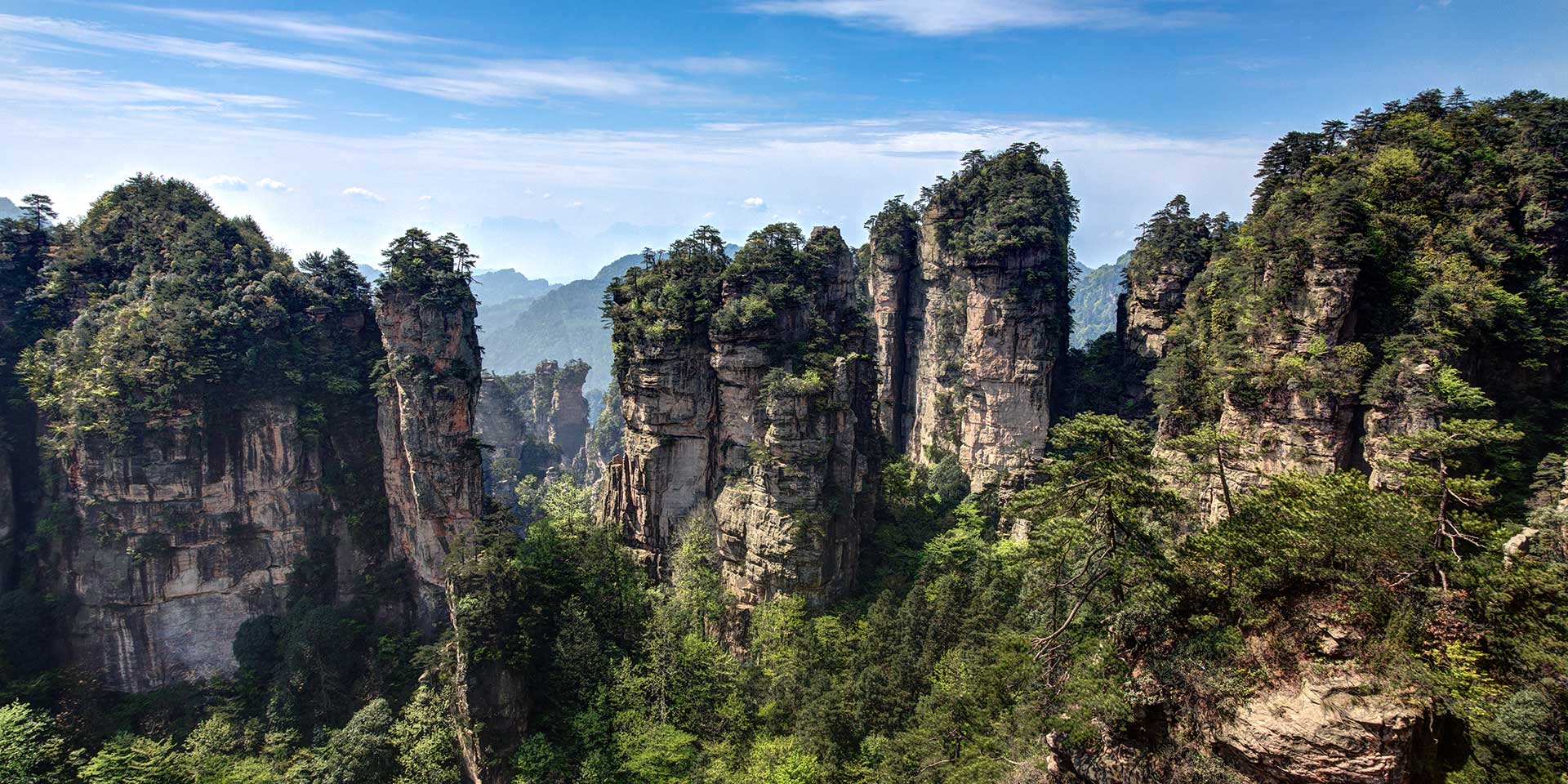 It was as though I had stumbled into another world when I visited the Zhangjiajie Scenic Area in China’s Hunan province. It is an incredible Shangri-la, characterized by over 3,000 quartzite-sandstone pillars that rise over 600 feet from China’s emerald forests. This area has been a designated UNESCO world heritage site since 1992 and is one of the top 40 scenic spots in China. The landscapes are truly remarkable, as are the vast crowds of local tourists eager to catch a glimpse of the unique vistas.

My journey began with an early three-hour flight from Bangkok to Changsha. Meeting my travelling companions at Changsha Airport, we had a quick lunch at the world’s largest Chinese restaurant (with a capacity of 5,000 people), accompanied by a rather cheesy “cultural show”.  After eating, we swiftly set off for the four-hour drive to Wulingyuan by private vehicle. Here, we checked into the 4-star Pullman Hotel, which would provide us with a good base and comfortable stay for the next few days.

Leaving the hotel at 8:30, we drove 40 minutes to the Zhangjiajie Park entrance. Upon our arrival it was evident that the park is incredibly popular and we would be sharing the day with tens of thousands of mainland Chinese tourists. We walked for 15 minutes, passing a stunning viewpoint, then boarded a public bus (the only vehicles allowed here). After a three-minute ride, we walked up 500 steps and rode another public bus for six minutes, finally enjoying a beautiful cable-car ride up to Yangjiajie upside station. Stopping at the “Natural Great Wall Viewpoint” amongst a crowd of tourists, we saw some incredible views where giant walls of rock slice through a vivid-green canopy.

Walking ten minutes further, we had another eight-minute bus ride to Avatar Mountain. Impressively, this site of towering pillars that rise from deep within the rugged terrain was the inspiration for the surreal landscapes seen in film Avatar. Looking down to the valley floor, I felt as though I was staring into another dimension. This destination is one of the major highlights of the national park and draws increasingly large crowds of tourists, and I was accompanied by groups led by flag-holding tour leaders with megaphones and people jostling for position at each stop. It was worth it though (even if my camera was nearly knocked off its tripod and into oblivion) and the sights were simply stunning.

The “South Pillar of Heaven” was a memorable point here, where I felt as though I was looking out onto the beguiling set of Avatar with no special-effects illusions. The “Bridge Across the Sky” was equally impressive, defined by a natural land bridge that connects two 3,280-foot peaks.

After a simple Chinese lunch, we took a public bus for 20 minutes to Sanchaku station, then rented a car for the 15-minute drive to Laowuchang. We discovered that this area was not officially open to the public, and we were excited that we had found somewhere that was almost “tourist-free”. We walked down 200 steps to the “Soldiers Gathering Stage” and “Terrace Field in the Air” viewpoints, which were completely deserted apart from a few vendors.  The scenery here was jaw dropping and we stood in silence for 15 minutes, marvelling over the views.

Two hours later, we drove our private car back to Sanchakou station, took a public bus back to Yangjiajie station and rode the cable car back down the mountain. We then hopped on another public bus for six minutes, walked back down the 500 steps, rode another public bus for three minutes to Dayangba station, walked 15 minutes then finally rode our own private bus for 40 minutes to our hotel in Wilingyuan. The logistics are enough to make anyone’s head spin, but with a knowledgeable guide we felt at ease. I later discovered that we had walked eight miles and scaled 260 flights of stairs that day!

The following morning, we rode our bus back to the same park entrance as the previous day. Unsurprisingly, it was just as crowded as before, and we spent a few moments watching Chinese tourists dress in tribal clothes and pose for photos.   Walking for 15 minutes, we took a public bus from Dayangba station to the downside station of Huangshizhai, where we took an eight-minute cable car to the top of Huanshizai mountain. Gliding between magnificent pillars, the ride up was beautiful and we admired the panoramic mountainscapes as they unfolded before us across the park.

At the top, I was pleasantly surprised to find fewer tourists here and a few flashes of blue sky made a welcomed contrast to yesterday’s overcast weather.   We walked around for a few hours, stopping at viewpoints that were dotted along the way. Nearly half the peaks of Zhangjiajie are visible here and we gazed over China’s subtropical forests before travelling back down by cable car and heading to Zhangjiajie city.

After lunch, we drove five minutes to Tianmen Mountain and enjoyed a 30-minute ride in the world’s longest cable car to the top. The views over vibrantly-colored mountain peaks, vertical cliffs and deep cutting valleys were like nothing I have ever seen before and were some of my favorite on the entire trip. Most notable was the view over the winding Tianmen Mountain Road or the “99 Bends”, known as one of the most dangerous roads in the world.

Once on top, we spent two hours walking around, and came to the glass walkway. Looking down, I could see a sheer drop, plunging down 4,000 feet. Only three-feet wide, with a sheer rock face on one side, the walk is a thrilling one, although I found it entertaining to watch panicked tourists grasping the cliff face in terror.

Next, we headed to Tianmen Cave, a huge water-eroded hole formed between two peaks and the highest natural arch in the world. It was made famous by the World Wingsuit Championships that were held here and sadly the death of Victor Kovats in 2013. Before taking the 10-minute cable car back down to the middle station, we had to queue for an hour amongst a bustling crowd of local tourists. Once at the station, we boarded a public bus for 20 minutes to the downside station of Heaven Gate. There is a stairway of 999 steps to the top or an escalator that runs both ways. While the “big hole” is a major highlight and a spectacular sight, there isn’t much to see from the top!

Next, we boarded a public bus for a truly hair-raising ride on the Tianmen Mountain Road at high speed – an exciting ride to say the least!

It was the last day of our trip and time to start the 4.5-hour drive to Changsha, spending a night at the new Kempinski Hotel before an early flight back to Bangkok (flying direct to Zhangjiajie is a more favourable option as it cuts out the driving time to Changsha). Before setting off, we decided to stop at the Biaozhimen entrance of the park and take a 15-minute bus to the “Ten Miles Gallery”. It is reachable by monotrail followed by a short walk on the “Golden Whip Stream”. Although there is a lot of charm here, it was very overcrowded and I was somewhat underwhelmed in comparison to what I had already seen. On the journey back, I slowly came back to the real world, although I will never forget the sensational sights that I witnessed on this trip.