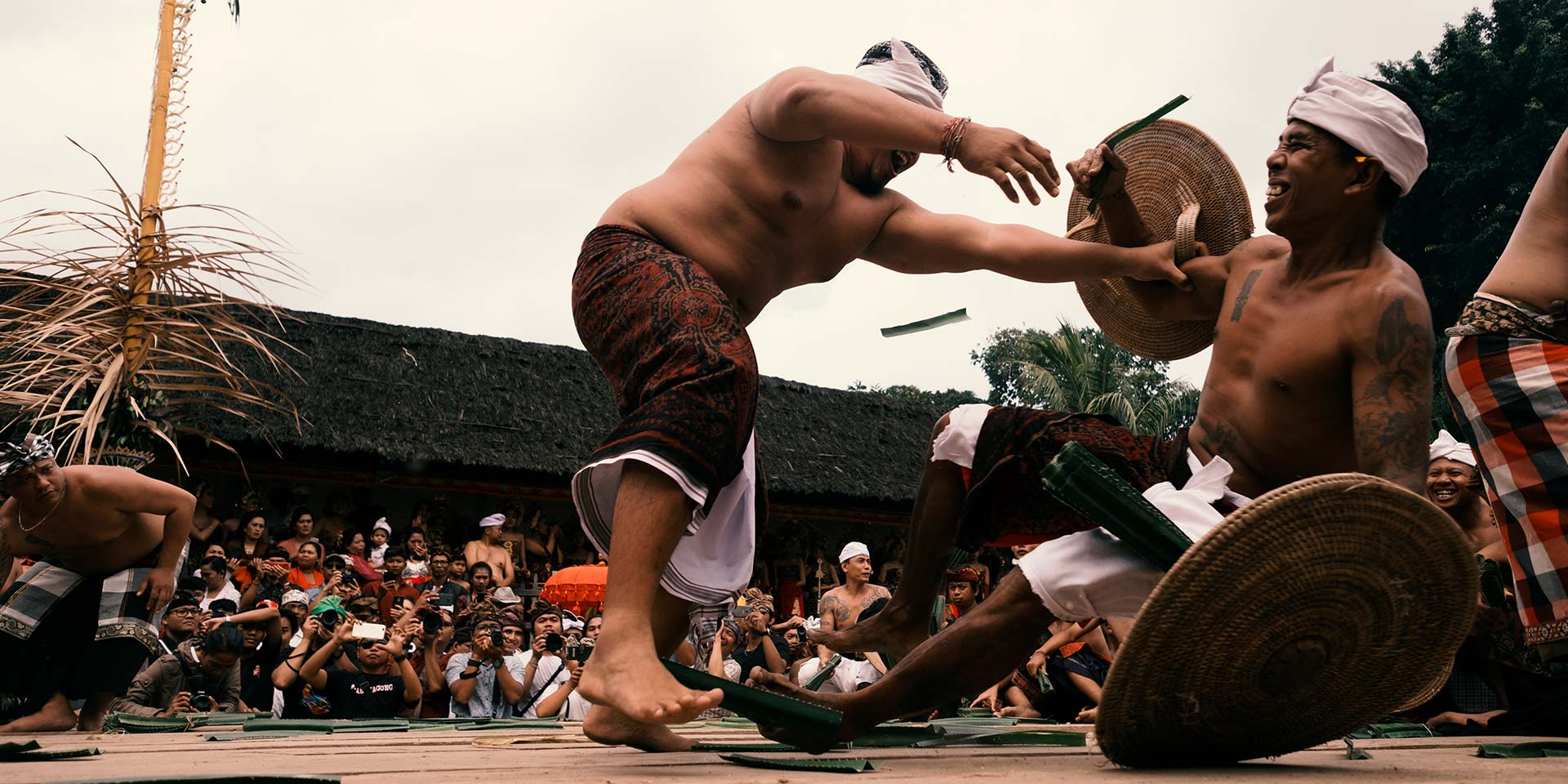 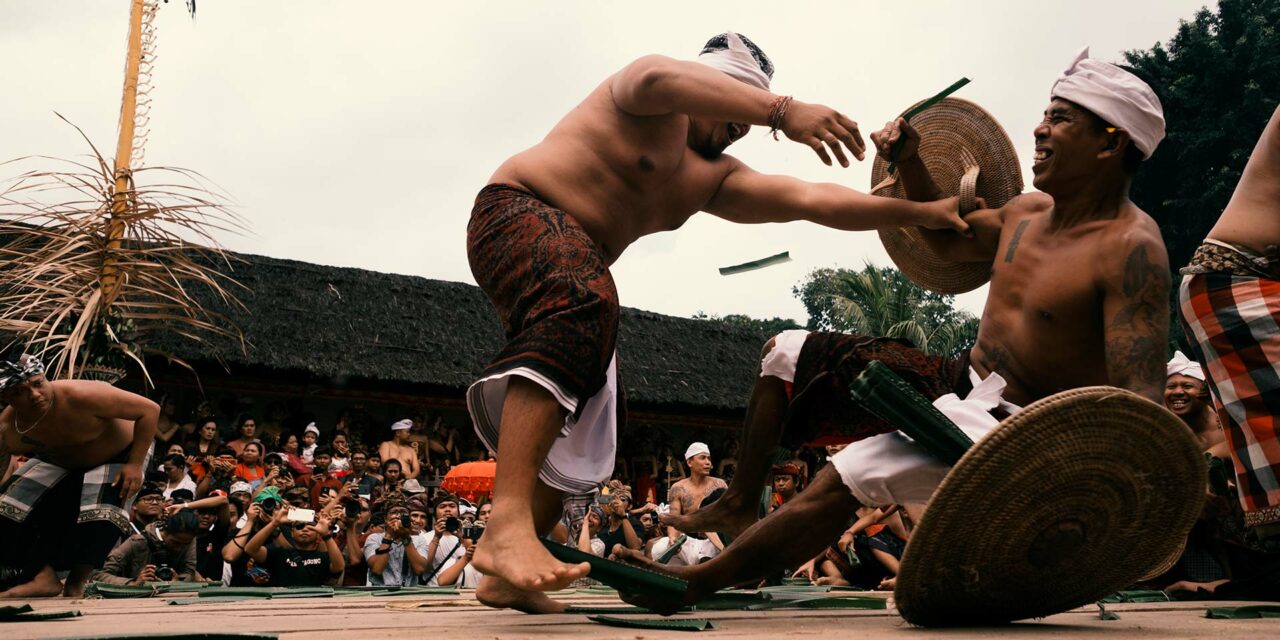 Tenganan Pegringsingan, an east Bali village, is divided into two halves, Tenganan Pegringsingan and Tenganan Dauh Tukad, known throughout the island for the production of “geringing” fabric, worn by women during traditional ceremonies. It is even more famous, however, for the Perang Pandan generally held in June and July — a harrowing event of ritual combat and Balinese culture.

“It originates from Hindu mythology about the Mayan king Denawa and Indra,” a local guide named Wayan tells us. He works in the surrounding area but always returns to his village for the ceremony.

ABOVE: Images prior to the festivities.

As we arrive, everything is on the move to set up for the party. Children run through the streets, families dressing up and start looking for the best seats on the stairs. Hordes of fierce Indonesian photographers gather around the edges of the ring to try and capture the best moments of one of the most intense cultural events in Bali.

Pushing aside the intensity, it’s all beautifully engaging and cheerful. The girls are painted up, some are on large wooden swings and others gather together and smile shyly every time our eyes meet.

This tradition, thousands of years old, is a ritual dedicated to the Hindu god of war, Indra, and is a coming of age rite for young men who enter friendly — though intense — duels with rattan shields in one hand and pandas in the other.

ABOVE: Fierce but friendly contest at Perang Pandan.

“This made the gods very angry, so Indra chose to fight and defeat Maya Denawa. For this reason, this famous duel is commemorated through the Perang Pandan ritual.”

The pandan, the namesake of this tradition, is nothing more than a thorny leaf of about 15 centimeters used in bunches of five or more, used as a sort of cudgel. The young duelists are scratching their opponents’ backs in order to get as many cuts as possible and emerge the more unscathed of the two. It is normal to see blood at this festival. For the indigenous people of the village, Bali Aga, the blood shed during the ritual is an offering to the gods, a way to assuage anger.

Participants, young and old, compete shirtless, wearing colorful sarongs and the traditional male headdress, the udeng. Even though it’s a rite of passage for young adults, children of about 6 to 7 years of age compete. Cheerful and amused they push each other, shout loudly, and free themselves from the crowd to try to attract attention and be chosen by the master of ceremonies.

Finally the meeting begins, and the suspense is palpable. Everyone screams and the young participants walk around almost dancing; competitors walk toward their opponent ready to defend themselves with their shield. A participant lunges towards the opponent hugging him and, pandan in hand, they begin to rub their back with force, covering the skin with bloody scratches.

ABOVE: A participant catches a shield to the face.

“The Mayan king wanted to be the greatest and most important god of all and to forbid people from performing their religious ceremonies,” Wayan explains. “These made the gods very angry, so Indra chose to fight and defeat Maya Denawa. For this reason, this famous duel is commemorated through the Perang Pandan ritual.”

The ring is surrounded by hundreds of people, participants, and visitors. There is no logical thread: each celebrant them comes spontaneously to fight and the opponent can be anyone, even a family member.

Competitors continue to push the pandan into the flesh, but do so laughing, without a hint of anger or even much pain. When one of the two yields, and generally catapulted to the ground, the two duelists shake hands and the next fight takes the stage. There is a contentious desire to get involved, to show others how mature you are, especially for the little ones.

ABOVE: Victories and consequences of Perang Padan.

We note how the defeated participants pass between the future competitors or among the ‘defeated’ with a homemade bowl with a yellowish ointment inside that applied on the wounds, immediately dries and causes them to heal. That said, all those who apply this remedy seem to jump to their feet due to the burning. It’s a mix of herbs, turmeric, and galangal, their local ginger, and vinegar — a real miracle remedy.

It’s a ritual that continues throughout the day, mixed with the surrounding activities that the people of the village offer their neighbors and foreign visitors. It’s a disarming beauty to see how such rituals are still perpetuated and supported so vividly by the local community, despite these modern times.

Like so much in Bali, it’s not an attraction; it’s a significant moment that the Balinese choose to share.