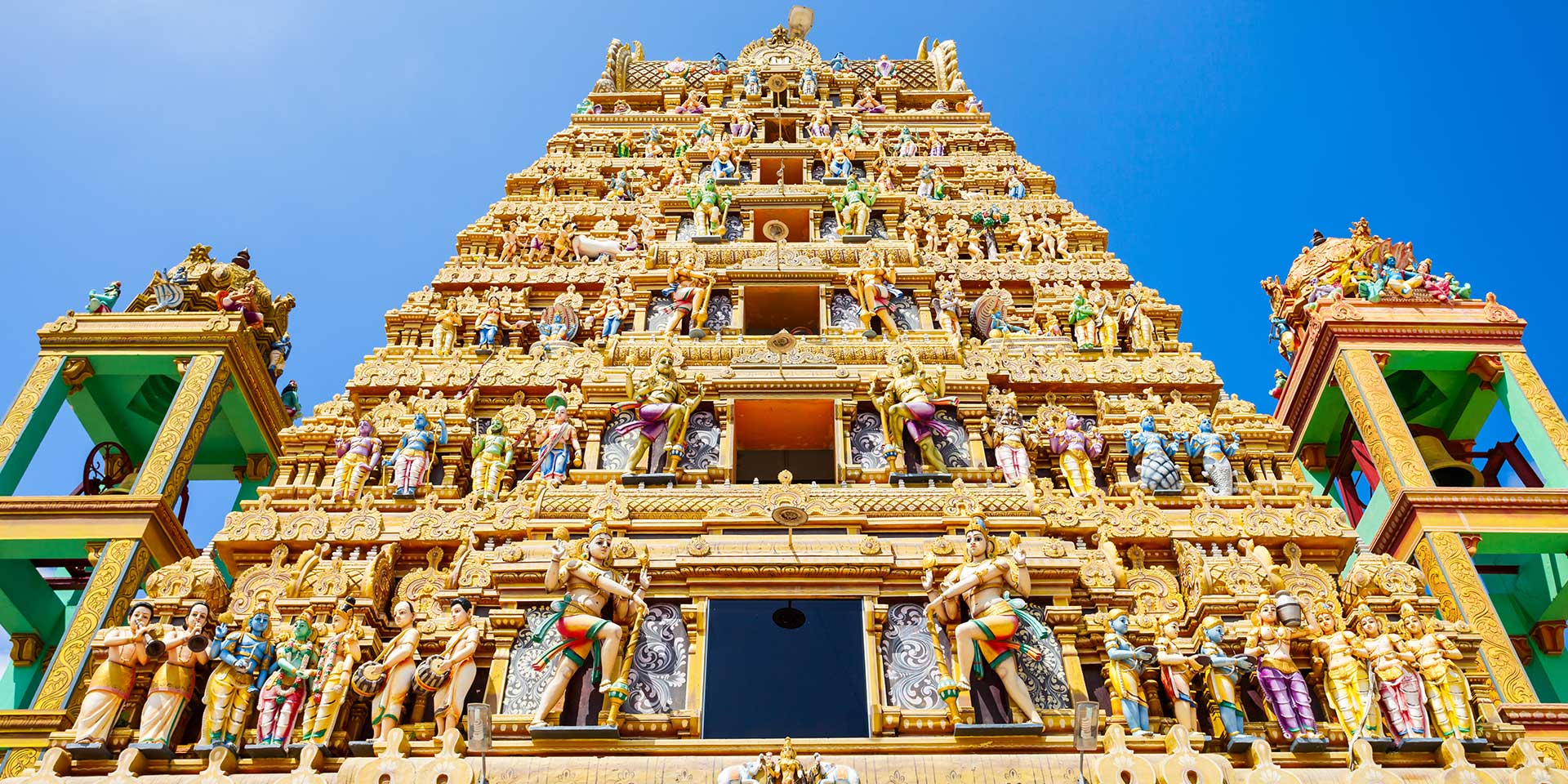 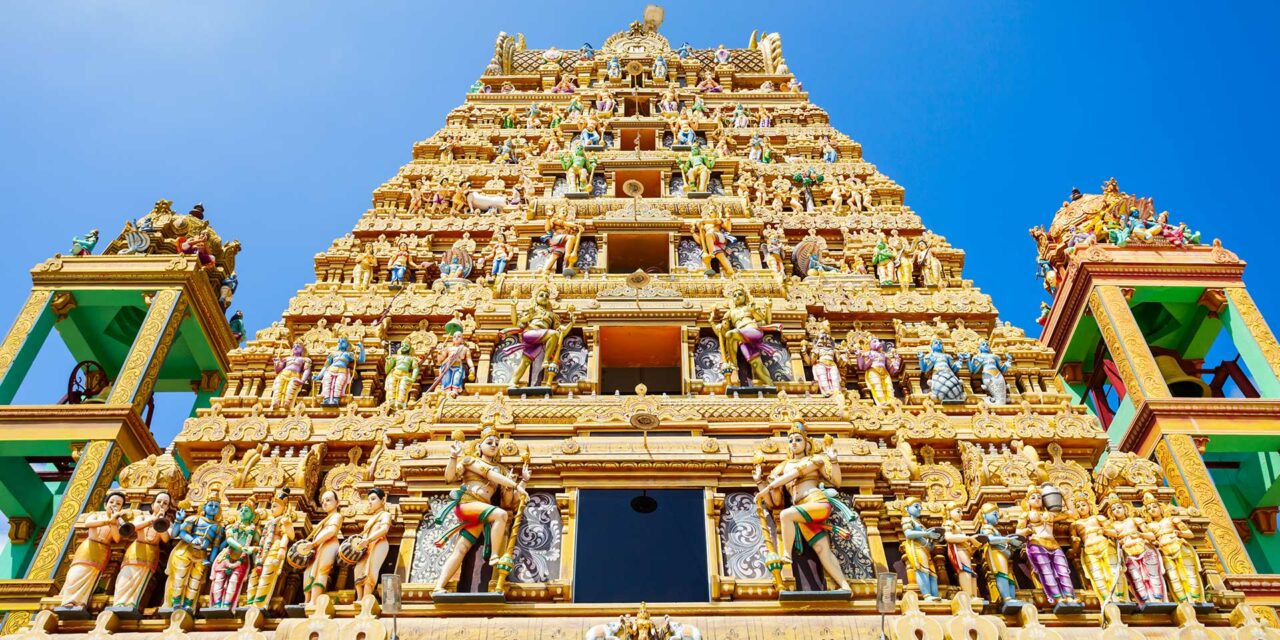 As the train leaves the capital city of Colombo and heads north past Anuradhapura, the scenery starts to change. Shrublands, paddy fields, and coconut palm groves are replaced by barren lands: large, flat water lagoons and palmyrah palms. For many years, Jaffna and the north have been cut off from Sri Lanka’s tourist map. In Jaffna, ramshackle, heritage buildings dot the cityscape. A large market dominates the busy town. Palmyrah leaves are weaved into a cadjan fences in houses. Well-to-do households, however, use wood-framed tin fences. They glisten in the harsh midday sun. This is Jaffna.

See the Temples of Jaffna

The northern region of Sri Lanka is home to a vast majority of ethnic Tamils. As most of them are devotees of Hinduism, bright-colored temples are scattered over the landscape. In Nallur, a suburb in Jaffna, there lies the Nallur Kandaswamy Temple, one of the main places of worship for Hindus in Sri Lanka. A tall wall painted in red and white stripes guards the temple premises. Reflecting South Indian Dravidian architecture, there’s a large, golden gopuram, the name given to the ornate entrance tower frequently found at Hindu temples.

Once you are inside the temple, expect to be marveled by the decorative murals, brasswork, and pillared halls with intricate details. Common etiquette here is that all visitors must remove their shoes, and men have to remove their shirts too. So, be prepared.

ABOVE: Monk at a Jaffna market.

In Jaffna homes, food is cooked with an extra portion of love. The region harbors a delightful cuisine. It bursts with flavors. Locals prepare shellfish from the nearby lagoons into punchy-red, spicy curries – which are devoured with eager enthusiasm.

The Jaffna crab curry is a must-have, while a wonderfully-flavored mutton curry dominates the lunch table in many households. Breakfast usually begins with large, plain thick dosa eaten with sambar. Sweets and snacks are prepared with various parts of the palmyrah palm. Every morning, market vendors neatly stack their makeshift stalls with palmyrah jaggery, prepared with palm syrup and carefully wrapped in dried palm leaves. A Christian convent, some 20 kilometers outside the city, prepares grape wine from regional produce. Named after the convent, Rosarian Wine is sold in the main market in Jaffna.

ABOVE: The Fort at Jaffna.

Walk along the ramparts of the Jaffna Fort during the sunset for a beautiful view of the surroundings. Soft, golden sun rays embrace the deep moats of the fort, filled with cyan-colored water. There’s the azure blue ocean, expanses of greenery in one side, while a mosque comes to the picture in another corner. The Fort was originally constructed by the Portuguese in 1618. It was later revamped by the Dutch. Much of the Fort was destroyed by the three-decade-long ethnic strife. Today, crumbling old walls remain as remnants of the frequent shelling and renovation is carried out for tourism purposes.

Sri Lanka’s Northern peninsula is surrounded by many small islands. Some of them are open for public visits. Nainativu is one such island. Although smaller in size, it’s one of the main pilgrimage sites in Sri Lanka, thanks to the popular belief that Lord Buddha had once visited the Nainativu Island. There are two temples. One temple, named Nagadeepa Purana Vihara, is a Buddhist site. On the opposite side, you can visit Sri Naga Pooshani Amman Kovil, a Hindu temple with large, vividly-hued sculptures belonging to many Hindu deities.

Hop on a navy-run ferry, and go further from the mainland Jaffna to find Delft Island. The local name is Neduntheevu. Built on coral and limestone, the island boasts a rich history. You will explore the Portuguese-built fort and a huge baobab tree with a 52-feet hollow trunk.

Some other places to see in Jaffna are Sri Naga Vihara (a Buddhist temple located in the city center) and the Jaffna Library, which, before its destruction in 1981, was one of the biggest libraries in Asia. You can also explore many ruins of the ancient Jaffna Kingdom such as the Minister’s Residence of King Sangili. King Sangili or Cankili II was the last king of Jaffna before the Portuguese rule. A large statue of the erstwhile king is now erected in the town. Some 27 kilometers north of Jaffna, near Chunnakam, you will find Kandurugoda Vihara, which hosts about 20 stupas built from corals.