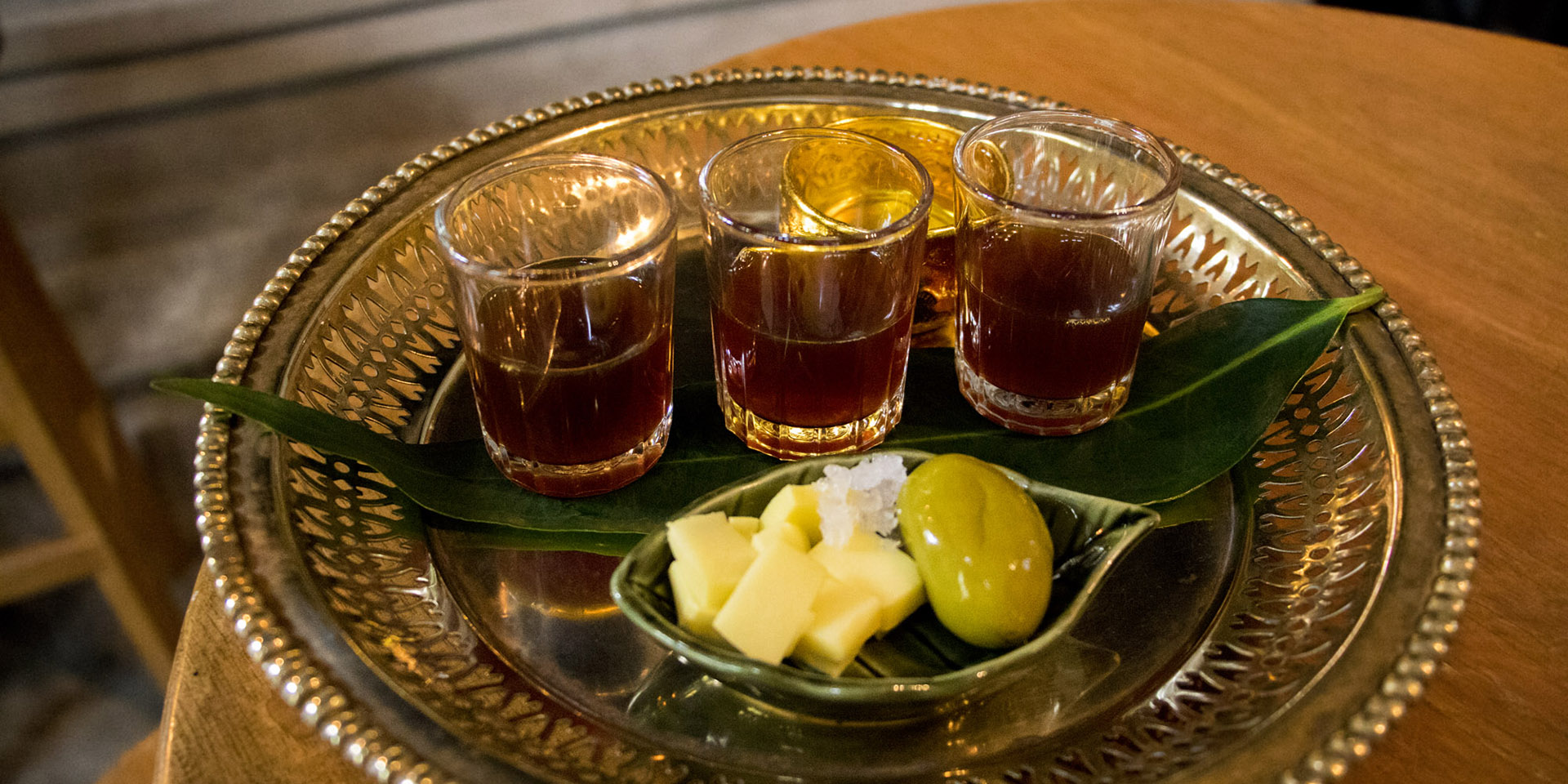 Five years ago, it would have been impossible to find a sophisticated Bangkokian tossing back a shot of ya dong, or Thai herbal moonshine. It costs just 30 cents a pop at shady liquor carts on street corners around the city, found in rows of cookie jars with questionable infusion recipes.

While its street version has long been enjoyed among Thai laborers, Tep Bar, a hip speakeasy in Bangkok’s creative district, has made their name for offering the upscale interpretation of this potent and uniquely Thai liquor.

ABOVE: Traditional ya dong set at Tep Bar.

Largely inspired by 17th-century Thailand, serving a ya dong lineup in a picturesque tray is part of their recreation of Siam’s golden era, when the herbal liquor was first recorded in writing.

Hundreds of years later, Thais still associate ya dong with masculinity; a quick sip is believed to enhance a gentleman’s performance in bed. When asking Tep Bar’s co-founder Rommaneeya Jayavasu about its magic, she simply says that even though ya dong was taken as a health supplement in the past, there’s no scientific proof of its benefit – just beliefs that have been passed on from generation to the next.

“Each recipe is different because of the herbs they put in,” Rommaneeya explained as we took a shot of Seven Eleven, a black ginger-based moonshine alleged to boost sexual prowess.

As ya dong is mainly composed of rice spirits and honey, the booze is pretty easy to swallow. Just like in the old days, you drink ya dong like a shot and chase it with fruit. Tep Bar’s set of three ya dong shots comes with a small glass of pandan-infused water (as a traditional chaser) and picked olives and mangos to cleanse the palate between each shot.

Next up was Lion King, a shot of Himalayan cherry ya dong to boost strength, and Pussy Whipped, barbed grass drink to reinvigorate the lady parts.

ABOVE: Songkran, a Mojito-inspired ya dong cocktail.

After finishing all three shots, Rommaneeya agreed, “They’re all delicious, and just slightly different.” To describe the experience, ya dong tastes just like good old rice whiskey, with an herbal aftertaste. It definitely leaves the stomach warm and the head fuzzy.

If three liquor shots with dinner are little too much to handle, Songkran, a Mojito-inspired ya dong cocktail, is a refreshing alternative.

Stepping into Southeast Asia’s Spiritual Side

According to Rommaneeya, it’s been told that, in the past, how one drank ya dong said about their social status. While a wealthy Thai took a shot with pickled fruit, the others made do with star gooseberries and edible leaves found in their yards.

Ya dong supposedly became the swill of the working class, after the upper class turned to fancy bottles of imported booze. Rommaneeya described the age-old infusion as a gem that returned to Thai drinking culture just in time.

“We do have great stuff. It’s a hidden gem,” she said of ya dong. As for Tep Bar, the co-founder said that she wanted it to become a destination to experience Thainess. “I wanted to create something that Thais can be proud of.” A word of advice: If you decide to spend a night at Tep Bar, it would be wise not to make important plans in the next morning.