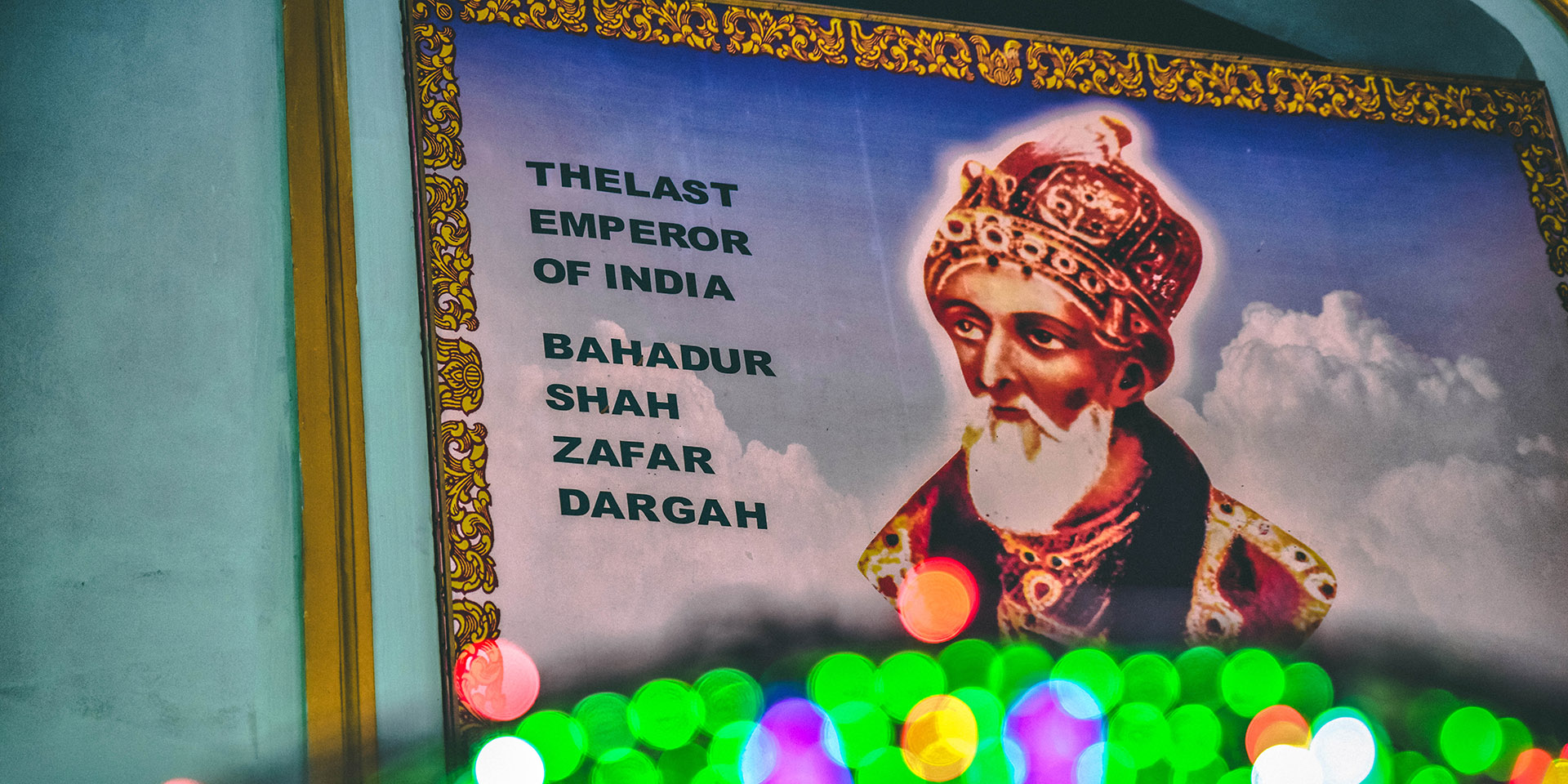 This is a bizarre situation. The Burmese taxi driver has no idea where we’re going, relying on me to guide him via my phone’s GPS. When my internet drops out the driver stops his rickety Toyota several times to ask pedestrians for directions. The responses instill no confidence: Furrowed brows, patently vague answers, and hesitant finger pointing. It is hot in the back of this cramped car and I’m swiftly losing patience and fluids. “How is it possible,” I think to myself, “that no one in Yangon knows the location of the mausoleum of India’s last Muslim Emperor?”

Yangon is a wonderfully intriguing city, but not one which has a long list of notable attractions. Aside from the gleaming Shwedagon Pagoda, and a couple of other nice Buddhist temples, there are no sites which stand outs. That is why I had, perhaps naively, assumed there would be great significance attached to the resting place of one of the most famous men in India’s Muslim history.

ABOVE: Mausoleum of Zafar II.

It is a mystery why so few people in Yangon are aware of the presence of the tomb of Bahadur Shah Zafar II. It is an even bigger riddle how such an important figure in Indian heritage ended up buried in the basement of a small, modest mosque – not in his hometown Delhi but instead 2,300 kilometers away in Myanmar. Visiting his mausoleum is the initial step in my determined effort to understand the curious life of Zafar II.

My first hope is that I will be welcome there, as some mosques do not allow non-Muslim visitors. Fortunately, when I walk inside the complex I’m met by smiles, which only widen when I explain my fascination with Zafar II.

“Please, please,” is the enthusiastic encouragement of several Muslim men pointing toward the basement entrance. There, beneath the mosque, his casket sits on display inside a cramped room, which is sparsely decorated by a few pictures of the Emperor. It is a remarkably humble mausoleum in comparison to the enormous and opulent resting place of many of Zafar II’s fellow Mughal leaders – Humayun’s Tomb in Delhi.

Zafar is actually the pen name the Emperor gave himself, as he was a passionate poet. It meant victory, yet his life ended in defeat and humiliation. There was a battle, followed by an escape attempt, a trial, foreign exile, death behind bars, a demeaning burial, and decades of controversy over the location of his grave. But first let’s trace the events that led to such tumult.

Zafar II was a member of the Timurid Dynasty, a hugely-powerful Muslim clan which ruled swathes of Central Asia, India, Iran, Pakistan, Afghanistan, and Iraq during the 15th and 16th centuries. The Timurids went on to found the renowned Mughal Empire, of which Zafar II was the final Emperor. From 1526 to 1857 the Mughals ruled over huge areas of the Indian subcontinent and instigated major changes across India.

ABOVE: Spire at the Mausoleum of Zafar II.

How unfortunate is Zafar! For his burial, not even two yards of land were to be had, in the land of his beloved.

They united many separate kingdoms under a central Government. They oversaw the blending of Persian, Arabic, and Hindi languages to form Urdu. And, perhaps their most lasting achievement is the building of many of India’s most revered structures in the Mughal architectural style, which mixed Indian, Persian, and Turkish designs. Famous examples of this style include the Taj Mahal in Agra, Shalimar Gardens in Lahore, and the Jama Masjid mosque, Red Fort, and Humayun’s Tomb in Delhi. The latter two of these buildings played a central role in the life of Zafar II.

When his father Akbar Shah II died in 1838, he ascended to the throne, with his coronation taking place inside the huge and magnificent Red Fort. While his title of Emperor was very grand, it turned out his power was actually quite limited. By the time Zafar II took control of the Mughal Empire its territory had shrunk dramatically to include only Delhi.

He lived in the Red Fort as Emperor for almost 20 years until he was forced to take refuge in Humayun’s Tomb, a similarly grand structure which houses the graves of many of the most revered leaders of the Mughal Empire. This was 1857 and the Indian Rebellion had begun against the British.

ABOVE: The humble final resting place of Zafar II, the last Mughal emperor.

When it became clear the British were set to take Delhi the Emperor fled to Humayun’s Tomb, where he hid amid the ghosts of fallen Mughals. Eventually the British located him, forced his surrender, put him on trial, and found him guilty of treason.

Zafar II and his wife were sent to another British outpost, Yangon, marking the end of the Mughal Empire after more than 300 years. Four years later, in 1862, he died there in a British prison. Determined not to make him a martyr, the Brits buried him in an unmarked grave in Yangon so that his supporters would have nowhere to mourn.

His epitaph reads, “How unfortunate is Zafar! For his burial, not even two yards of land were to be had, in the land of his beloved.” In 1876 Queen Victoria was named Empress of India.

His burial site was not discovered until 1991 when, by accident, workers dug it up.

Some 28 years later, I’m all alone in a basement bathed by fluorescent lights standing next to his coffin. It is hard to believe the man inside that modest wooden box, hidden away in a tiny mausoleum, was once the head of one of the most commanding empires Asia witnessed. Zafar II hasn’t been entirely forgotten though. The worshipers at this mosque clearly revere him.

“He’s a special, special man,” one male devotee says to me after I’ve walked up the steps and out of his mausoleum. “Thank you to be interested in him.”