Formerly a trading outpost on the fabled Silk Road, Dunhuang was once a cosmopolitan, exciting settlement that saw a steady flow of ideas, goods, and travelers through its dusty streets. Among some of the many innovations that once passed through this now unassuming, humble place were Buddhist scriptures; silk and tea headed for the west; and musical instruments, glass, and pottery.

After a series of ruinous invasions by nomadic tribes, as well as the increasing prominence of sea-borne trade routes, Dunhuang fell into a deep decline. Today, Dunhuang is known for its wealth of historical landmarks, some of which are 1,000 years old; highlights include the historic Mogao Grottoes, a priceless repository of Buddhist art; and the Dunhuang Museum, whose comprehensive exhibits explain in detail the history and lore of Dunhuang and its environs.

Visit the Dunhuang Museum to learn more about the history of the Mogao Grottoes from a local expert. View the museum’s collection of scrolls and sutras discovered in the caves.

Travel by camel caravan into the dunes of the Gobi, where you’ll enjoy a feast of local specialties as the sun sets over the desert, then settle in around a bonfire to appreciate the silence of this vast landscape and a spectacular showing of stars.

Go sand tobogganing, paragliding or ride a camel in the Mingsha Dunes at the eastern border of the Gobi Desert. Explore Yueya Quan, a small crescent-shaped lake famous for its permanence in the desert, first recorded by travelers at least two thousand years ago.

Visit the Mogao Grottoes, one of the greatest archaeological treasures in Asia. Spend the day exploring the thousand year old site and its 492 caves, which contain ancient manuscripts, paintings, and some of the earliest Buddhist art in
China. 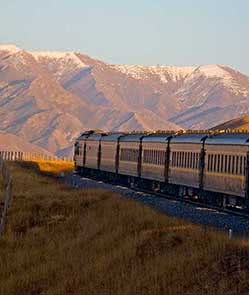 The Shangri-La Express allows guests to experience the exquisite scenery of China, such as the ancient wonders of the mysterious Orient, the treasures of the Tarim Basin, the Gobi Desert, and the Mogao’s Buddhist cave. It is the most modern hotel train in China, and despite the welcome amenity of air conditioning, it retains the romantic notion associated with the Shangri-La name and is traditionally decorated transporting guests back to an era befitting many of their travels. The accommodation echoes this ethos, ensuring guests every comfort is met. The food prepared by the chefs in the restaurant car is world class, and the Piano bar has a wide selection of high quality wines and beers in addition to other drinks. Not only are personal headsets offered in addition to an experienced guide for each external tour, but laundry service, internet access and an on-board doctor and medical facilities are also available. 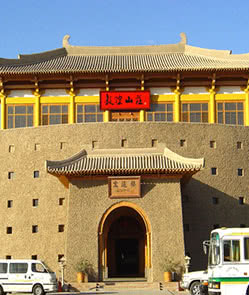 Set against the picturesque Mingsha Sand Dunes, the Silk Road Dunhuang Hotel is modeled after Tang Dynasty structures, with large rooftops, long corridors, replica furniture, and the mud walls typical of the buildings of the region. The Silk Road Dunhuang comprises 266 rooms, some set around courtyards, and all featuring air-conditioning, mini-bars, high-speed Internet access, and air conditioning. Culinary selections at the Silk Road Dunhuang include the Deli Chamber, which serves spicy Sichuan and fresh Cantonese fare; the Delights Chamber, which serves Asian and international dishes; and the Starry and Lobby Lounges, two cocktail and sitting lounges set outside and in the lobby, respectively. The Silk Road Dunhuang possesses a business center, sauna and steam baths, meeting rooms, and access to a variety of activities, from camel riding to karaoke lounges. The hotel is located twenty minutes from the airport, and about a half-hour away from the historic Mogao Grottoes.

Step back in history a few thousand years, when the Silk Road was first established and you’ll find Dunhuang at the crossroads of the Northern and Southern route

Those on a quest to discover the ancient Silk Road often make stops in Dunhuang, Urumqi, and Kashgar, all oases on the ancient trade route, but none with as much to offer as Turpan.