Throughout Chinese history, Guilin has long been lauded for its artistic delights and beautiful scenery, and rightfully so. The surrounding landscape is speckled with limestone karsts, surreal finger-like mountains that were formed through centuries of erosion and rise high above the Li River plain. There are two kinds of karsts: fenglin, which rise straight up, and fengcong, which look like conjoined, rolling hills. Such sights have been immortalized by generations of artists and writers, and are perhaps the best-known landscape of China. Neighboring Guilin city is Yangshuo which offers the same stunning geography as Guilin but without the crowds.

Explore Ludi Yan, or “Reed Flute Cave,” which is situated about 5 kilometers (3 miles) northwest of the center of Guilin. One of the foremost natural wonders of Guilin, the caves consist of tunnels measuring 10 meters (33 feet) in diameter that run for roughly 500 meters (1,640 feet) through Guangming Hill. The caves derive their name from a type of reed once found growing within, which were made by local residents into flutes.

Inside the caves are inscriptions dating back more than 1,000 years; in the 1940s, Guilin residents hid in the caves during the Japanese invasion of China. Today, the caves many stalactites, stalagmites and inscriptions are illuminated by lighting of various colors.

Drive to the Yulong River, a quieter tributary of the Li River, for a short, private cruise on a bamboo raft through the beautiful valleys of the Guilin area. The steep green hillsides and dramatic limestone spires that line the rivers here have inspired generations of Chinese landscape painters.

Visit one of Guilin’s most well known rock formations, Xiangbi Shan, or “Elephant Trunk Hill,” so named because of its resemblance to an elephant drinking from the adjacent Li River. Learn about the local legend that explains how this “elephant” came to reside here permanently. If you wish to climb the path to the summit of the rock, it is about 100 meters (328 feet) high.

Visit a school in Huangluo village where you can play with the children and speak to their teachers about the Chinese school system. Learn more about rural life in China through the eyes of the Zhuang minority, the largest ethnic minority in China with a population approaching 16 million, or roughly that of Australia.

Take a short hour hike through the Longsheng rice terraces for an idyllic morning marveling at these agricultural feats of engineering. End your hike at a scenic ridge where you can rest your legs and enjoy a picnic lunch.

An iconic sights in central Guilin, Fubo Shan, or “Wave-Calming Hill,” is so named because this Buddha-topped rock is believed to subdue the waters that rush below it.

Visit Xiaozhai, one of a number of remote villages where the Yao minority people live. The Yao are one of 56 minority peoples recognized by the Chinese government and they are known for their brightly colored textiles and their musical tradition. Take part in a singing ritual, watch villagers work on traditional fabrics, and see an informal cooking demonstration before sitting down to a lunch of typical Yao dishes.

Explore Xinping, a small town on the Li River, famous for its setting amidst karst pinnacles, prehistoric rock formations known throughout China for their beauty. Bicycle through the village and stop at farmhouses to chat with the locals through your guide. 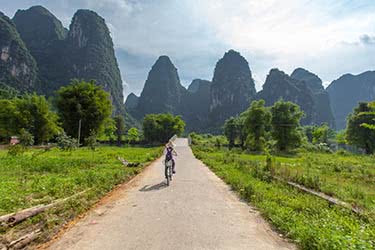 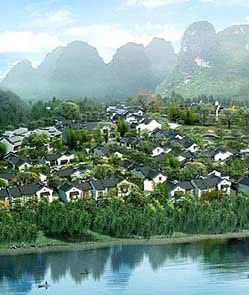 On the banks of the River Li, nestled in a valley surrounded by lushly verdant mountains, Yangshuo is a must-see destination for nature lovers and those seeking a respite from the fast pace of life. Active visitors will enjoy the range of outward-bound activities available in Yangshuo, including rafting and world class rock climbing. And what better place from which to explore the stunning scenery than the Banyan Tree? In the elegant one- or two-bedroom villas overlooking the tranquil gardens or the peaceful lake, the ancient Orient meets modern comfort. Gastronomic delights are served at Baiyun, where diners can enjoy a range of Guangxi and Canton dishes. Meanwhile, the sumptuous international buffet at Ming Yue is sure to whet appetites. Guests can enjoy refreshing cocktails and exquisite snacks at sunset at the poolside bar or relax with a coffee or glass of wine in the lobby lounge. Recreation options on site include the glittering outdoor swimming pool, a fully-equipped gym with yoga studio, a cosy library and games room and a peaceful spa with a number of treatment rooms. 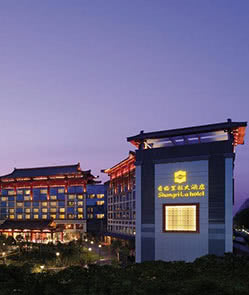 Set amidst the finger-like, limestone karsts overlooking the placid waters of the Li River, the Shangri-La Guilin offers unparalleled comfort in one of China’s most scenic cities. Each room features complimentary Internet access, tasteful furnishings and décor, and a view of either the surreal scenery of the Li River or the hotel’s verdant, expansive grounds. Dining options include the signature Shang Palace, featuring various regional specialties from Cantonese, Hunan, and Guilin cuisines; the elegant Li Café, which features a modern take on Asian cuisine; and finally, U Bar, which offers authentic western food and a view of the surrounding countryside. Drinks can also be had at the tasteful Lobby Lounge, or at the leisurely, relaxing poolside bar. Amenities include a comprehensive spa, as well as a health club with exercise facilities, swimming pools, and massage services. Nearby lies the famous Diecai Mountain, an iconic landmark that has long occupied many a Chinese painting, while steps away, guests can find bustling street markets packed with products of silk, crystal, and jade. The Shangri-La Guilin is about thirty five minutes away from Guilin’s Liangjiang International Airport (KWL). 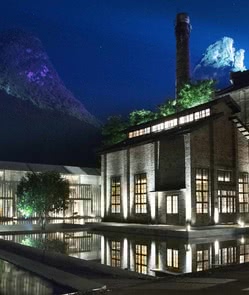 Yangshuo Sugar House provides a slice of luxury amongst the beautiful karst mountains, green hills, and winding rivers for which Yangshuo is famous. Located in a former working sugar mill constructed during the cultural revolution, the facilities have been remodeled by renowned architect Dong Gong of Vector Architects with interiors by award-winning Ju Bin of Horizontal Space Design. The result is an inspired blend of style and comfort. Each of the 117 rooms, suites, and villas offers contemporary aesthetics, LCD cable TV, Wi-Fi access, telephone, safe, minibar, and coffee and tea-making facilities. The resort includes a stunning swimming pool, international restaurant, in-house rum distillery, opulent spa, fully equipped gym, cardio theatre, separate weights area, and gorgeous views of the Li River. The local natural splendor of the region can be explored through the diverse range of exhilarating activities available such as biking, rock climbing, and hiking. 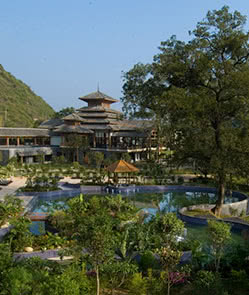 Opened in 2009, the Yangshuo Resort sits on a scenic perch on the banks of the Yulong River. Each of the 236 rooms offer balconies with mountain and river views and feature complimentary Internet service. Guests can choose from three on-site restaurants whose menus range from traditional Chinese cuisine to continental style cafés. The Dragonfly Bar is also available for cocktails, wine or tea. Other amenities include bicycles to ride around the property, an oversized swimming pool, fitness center, spa, Chinese traditional massage sauna center, and a children’s playground. The Yangshuo Resort is approximately 90 minutes from the Guilin airport.

Photographer Jordan Hammond travels to the most scenic areas of Guangxi – including Guilin, Yangshuo, and Xingping – to turn his camera on the majesty of rural China.

The natural landscape and South China charm of Guilin and Yangshuo bring with them a few of the finer comforts by way of luxury resorts.

A Room with a View: China’s Longsheng Rice Terraces

I have been fortunate enough to have seen a lot of picturesque scenery in my life all over the world, but few places can compare with the breathtaking Longsheng rice terraces north of Guilin… 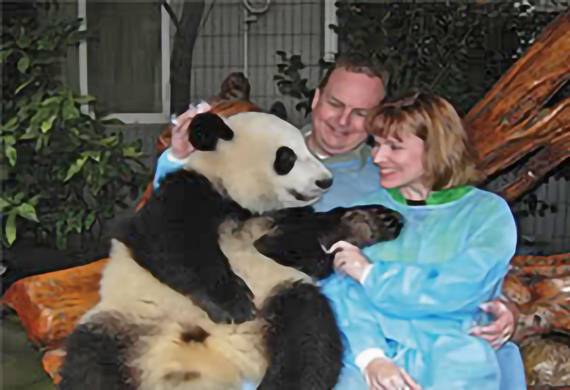 A Couple from Austin, Texas

Our trip to China went beyond our expectations. We hesitate to say it was a once-in-a-lifetime experience - we will travel with Remote Lands again and look forward to those new, exclusive adventures 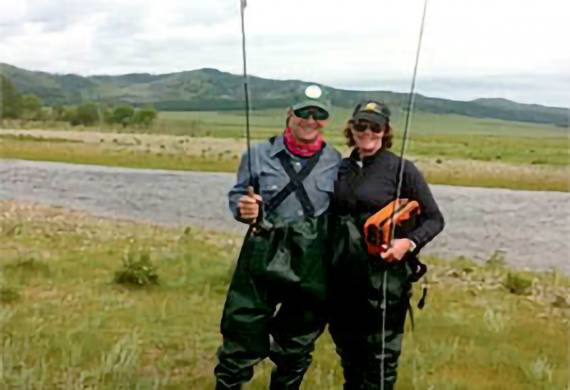