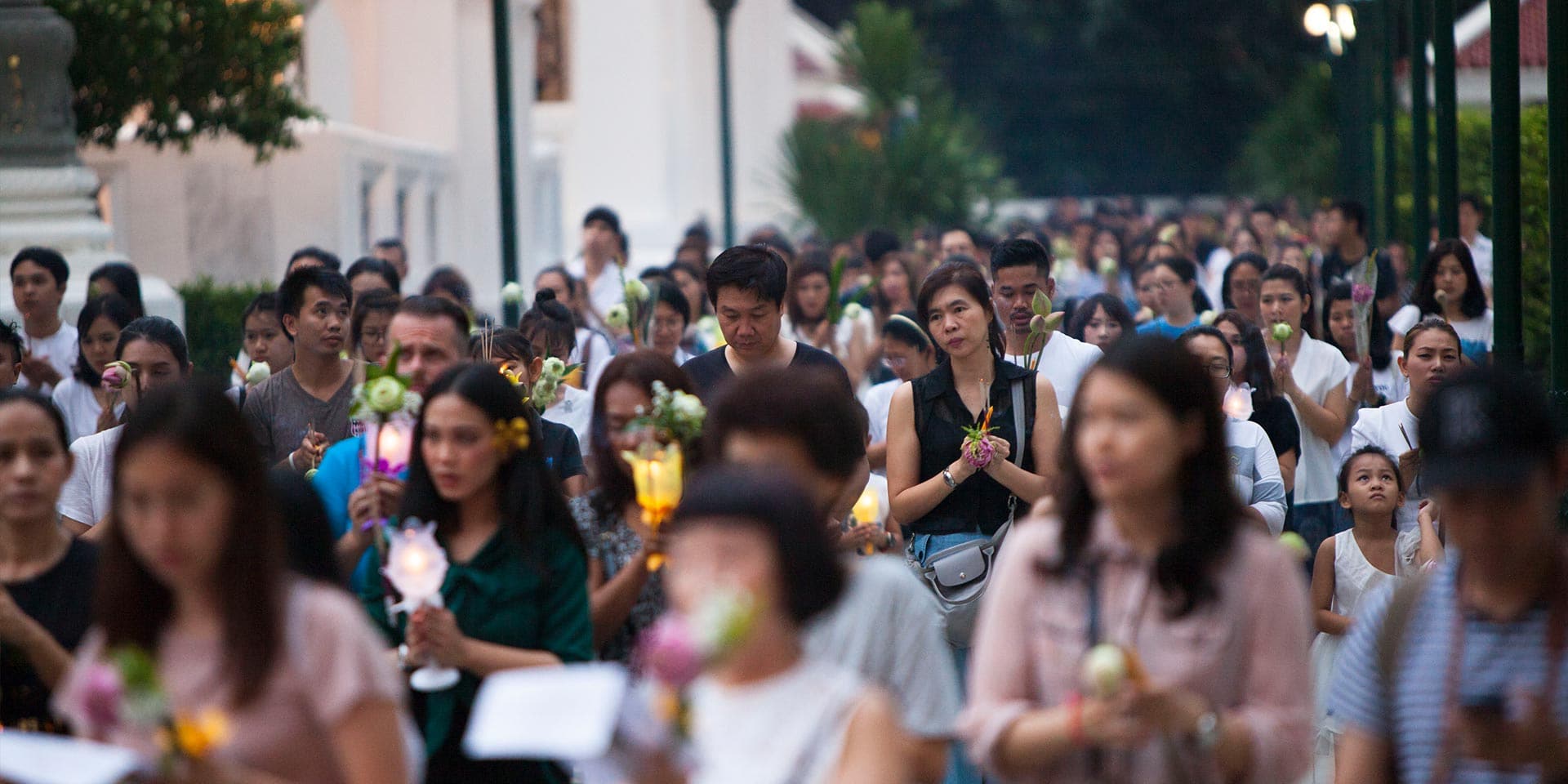 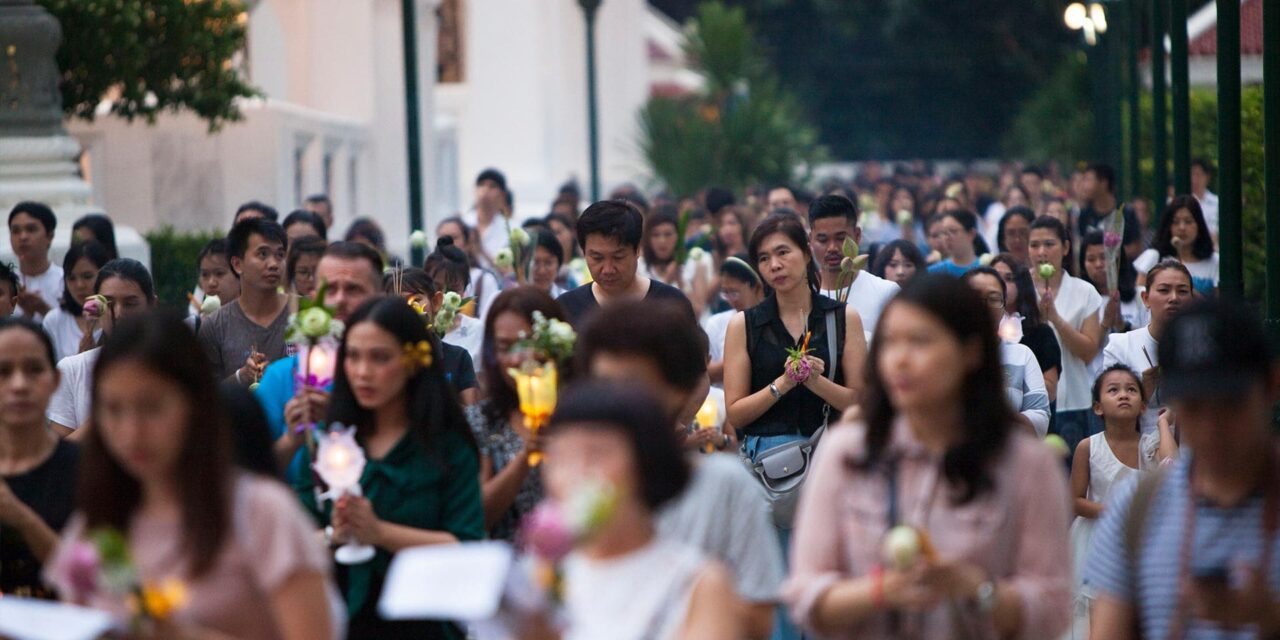 No matter what time of year a traveler arrives there always seems to be a holiday or festival drawing out hordes of people onto Bangkok’s streets. Home to approximately 14.5 million people the Bangkok metropolitan area is the administrative, economic, and cultural nexus of Thailand, a whirlwind of intersecting beliefs and peoples. Being a majority Theravada Buddhist country, some of Thailand’s most widely observed holidays are related to auspicious days pertaining to the story of the Budhha Siddhatha Guatama, attracting believers to the countless temples scattered throughout the capital.

ABOVE: Crowds of Buddhist devotees take part in the wian tian candle procession around Wat Pathumwanaram ordination hall on the eve of Asahna Bucha.

The most visually impressive events take place at the larger temples such as Wat Saket and Wat Pathumwanaram, the sundown candle procession (wian tian) around the central ubsot hall building being the highlight of holiday’s such as Makha Bucha and Asahna Bucha. Hawkers selling bundles of incense, candles, and flower offerings occupy every available space near temple entrances along with the usual assortment of stalls cranking out street food staples such as pad thai and saigrok essan (Issan sausage).

Wat Pathumwanaram, particularly significant due to the remains of Thai royals being being interred on the temple grounds, is located in the heart of the commercial shopping district between Siam Paragon and Central World. The juxtaposition of traditional Thai temple architecture and the glittering monoliths of commercialization along with the skytrain line that runs past them create a futuristic setting for the millennia old traditions played out in their midst.

ABOVE: Two young women laugh as them look at the red vibhooti dust thrown upon them by the Brahman priest during the Navaratri festival.

The Maha Uma Devi Temple in Bangkok’s Bangrak district is the most significant and oldest Hindu temple in the country, built in the late 18th century by some of the first Tamil Indian immigrants to the country. The temple honors the Hindu goddess Uma, mother to the god Ganesh and consort to the god Shiva.

Elements of Hinduism have creeped into some aspects of Buddhism in Thailand and statues of Hindu gods are worshipped and venerated in shrines alongside those of the Buddha and notable Thai monks. The Navratri Hindu holiday celebrations which normally occur during September or October are the most vibrant festivities put on regarding the temple, attracting crowds of thousands of people to Silom avenue, one of Bangkok’s busiest thoroughfares.

ABOVE: A Brahman priest walks with closed eyes as he throws red vibhooti powder to bless devotees of the god Uma.

For several nights traffic around the temple is blocked off and turned into a surreal walking street festooned with ornate shrines to Hindu deities and sages enacting rituals in states of ecstatic trance to appease their favored gods. Lines of the faithful placing offerings of cash and flowers at the feet of the deities patiently wait to receive blessings and incantations from the various practitioners of the spiritual arts hands, clasped in electric anticipation as the cries of the sages erupt from the slow motion riot.

The climax of the festival is a parade made up of processions of young girls  performing traditional dance along with a marching band heralding the arrival of a senior Bhraman priest. Walking with his eyes closed and balancing an ornate metal headdress upon his head he throws handfuls of red pigment vibhooti dust upon the rows of devotees sitting with garlands of flowers adorning their clasped hands as they chant “Maha devi! Maha devi!” in unison.

ABOVE: A young girl collapses screaming, overcome during a trance ceremony in Yaowarat’s Talat Noi neighborhood during the Vegetarian festival.

The idea that eating is on everyone’s mind constantly in Bangkok can be easily forgiven due to the ever present food stalls lining streets both big and small selling grilled meats of every variety.  Despite the normally hyper carnivorous nature of Thai cuisine one of Bangkok’s most visually impressive festivals, the Vegetarian Festival, focuses not on the panacea of foods available but on restricting one’s diet to vegetarian fare for spiritual and devotional reasons.

ABOVE: Adolescent boys create movements in the body of a massive animated dragon as part of the Vegetarian festival.

The setting for the Vegetarian Festival centers of Yaowarat Road in Bangkok’s Chinatown and normally takes place during October. Usually everything from dried pig’s face to birds nest tea can be found on the neon lit streets of Chinatown but during the 9 days of the festival those wishing to honor the nine emperor gods abstain from consuming anything not totally made from fruit, grains, or vegetables.

Elephants, Fishing, and Tropical Thai Islands with the Kids in Tow

Rituals and merit making take place in grand fashion at the many Chinese influenced shrines with dragon dancing troupes making their way through the crowds of tourists and locals.

The hardcore devotees can be found in the side streets, flanked by rows of musicians clanging symbols and drumming in union, creating a cyclical rhythm that draws some into altered states of consciousness.

Individuals slowly start making pronounced and deliberate movements, letting out measured breaths and striking poses as if dancing in slow motion. A deep tension is visible on the faces of the entranced, but for the most part they seem at ease, though one young girl was screaming wildly as if possessed by a violent energy. The sometimes intense nature of the festival is all in due course and is nothing out of the ordinary for the locals who witness it every year.