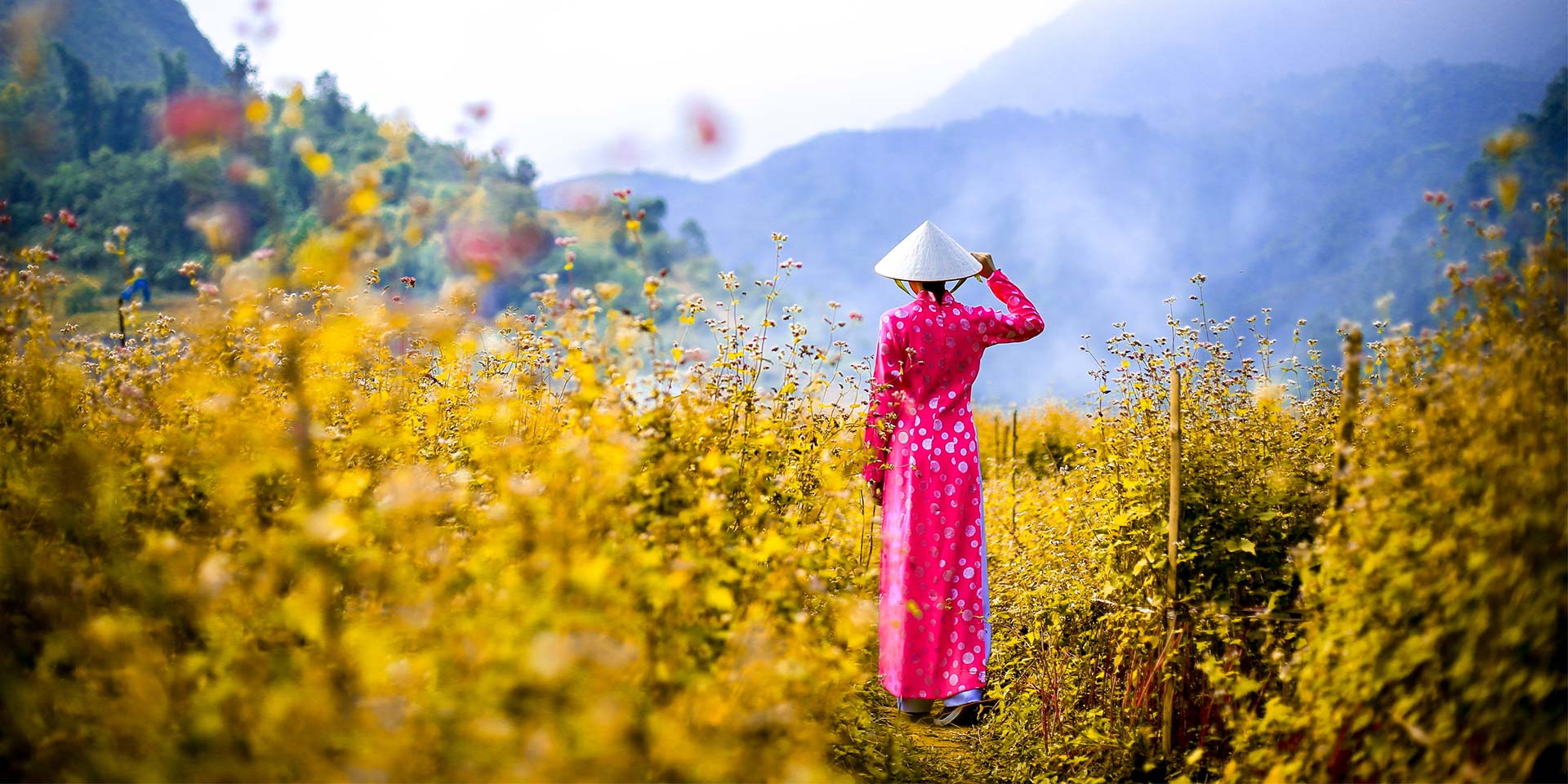 To many it is the iconic symbol of Vietnam. When some think of Vietnam style, they imagine a woman elegantly decked out in a conical hat and a flowing silk tunic, or ao dai. The conical hat, also known as a non la, has started to die out – first gaining popularity in rural environments more than 1,000 years ago for their shade and then different styles emerged for men and women and for casual and formal occasions – but these days the non la is becoming less fashionable. Not so for ao dai.

ABOVE: Ao dai in Vietnam.

These dresses are often the go-to outfit for special occasions – and for interested tourists. These graceful and colourful dresses are still considered chic. That is not surprising, as there is a timeless beauty to the ao dai. A long silk tunic which splits at the waist, it is partnered with loose silk pants, which typically are of a contrasting colour. As its wearer walks, the tunic and the pants together flow with a gentle and hypnotic rhythm. This adds to the dainty glamour of the outfit.

For 300 years now, the ao dai has been a symbol of Vietnamese femininity. Since that time, however, it has evolved. The concept was birthed in southern Vietnam in the early 1700s during the reign of Nguyen Phuc Khoat, a lord who ruled over this part of the country. Lord Nguyen had an array of courtiers – aides who accompanied members of the nobility to formal events; to set these stewards apart, Lord Nguyen asked they don a long gown over trousers.

Although this is considered to be the genesis of the original ao dai, it was inspired by outfits worn by the Chams. These were the people of Champa, an Indochinese kingdom which lasted from the 2nd to the 17th century in what is now southern Vietnam. The Cham women wore long, colorful dresses made from chiffon. By modelling the ao dai on this garment Lord Nguyen reputedly was attempting to win over the Cham people.

This original style of ao dai was not particularly attractive. It did not have a flattering tailored fit which accentuated female curves like the modern version with which we are most familiar. Instead it was loose and boxy in appearance, designed with function rather than aesthetics in mind. In this way it was similar to the ao tu than, a common form of Vietnamese female dress which preceded the ao dai. The ao tu than, which was most popular with working class women in North Vietnam, consisted of a baggy outer tunic, inside which was worn a long skirt and a bodice undergarment, with a silk belt tied around the waist.

ABOVE: Silks and patters for ao dai in Vietnam.

The ao dai continued in its uncomplimentary form until the 1930s. It was then that one of the most instantly-recognizable Vietnamese garments in the world was born with the input of Vietnamese artists who had trained in France. Led by a man named Nguyen Cat Tuong, this group came up with the idea for a new, sleeker ao dai. This form-fitting version was intended to highlight the feminine shape instead of concealing it. Rather than being utilitarian it was sensual and eye-catching.

This fresh ao dai was burned into the national consciousness when it started being regularly worn by Nam Phuong, the last empress of Vietnam. The sight of Nam Phuong looking resplendent in ao dai dresses from the late 1930s onwards started a fashion craze. This garment quickly came to embody class and sophistication for Vietnamese women. From the 1940s when leading artists painted or sculpted a female model, they typically asked them to wear an ao dai.

The dress was further legitimized in the 1950s and 1960s when political figures began wearing it in public. The First Lady of South Vietnam, Tran Le Xuan, was a famous fan of the outfit and started donning delicate ao dai for formal engagements across those two decades.

Then Communist leader Nguyen Thi Binh took the dress international when she wore an ao dai while acting as a representative of the Viet Cong during the Paris Peace Accords which ended America’s war in Vietnam War in 1973. During some of the most important moments in recent Vietnamese history, this famous garment played a silent but unmistakable role. It is, in many ways, part of the fabric of the nation.