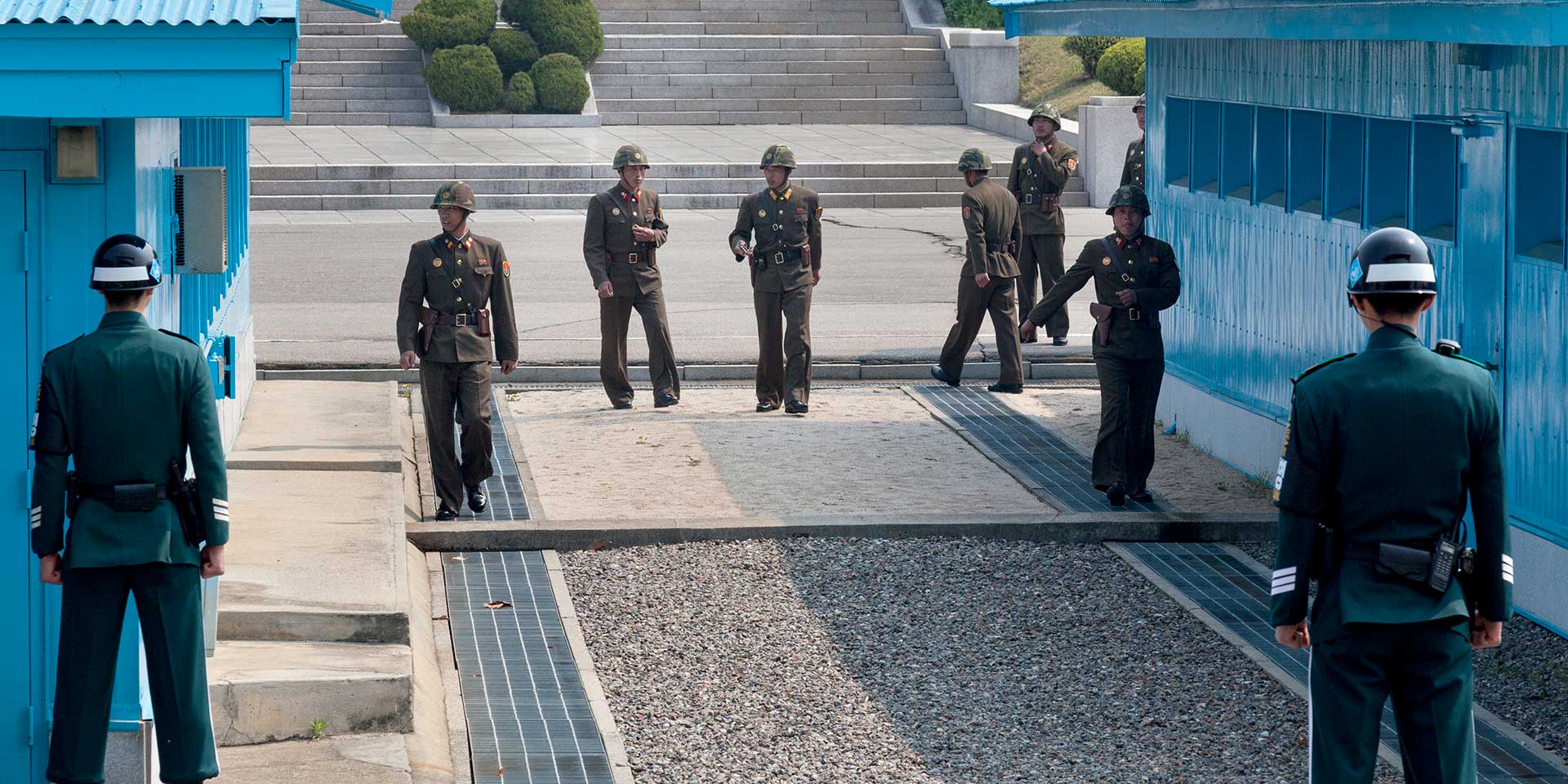 In the past I’ve  had the opportunity to visit  DMZ from the North Korean side , and on a recent trip to South Korea I decided to head up again to see it from the South.   With security tensions between the two Korean nations at its highest point in years during my visit, I wanted to get a look at the situation for myself.

The Korean Demilitarized Zone is, as the name implies, a strip of land between North and South Korea that acts as a buffer between the two countries. The strip, which runs along the 38th parallel and is 250 km long and 4 km wide, cuts the two countries nearly cleanly in half. It was created in 1953 as part of the Korean Armistice Agreement, which ended the Korean War. Due to the well-publicized remaining tensions between the two Koreas, the DMZ is today the most heavily-defended national border in the world.

ABOVE: A Republic of Korea “ROK” soldier on duty inside the DMZ conference room.

I was disappointed to learn that all DMZ tours from South Korea are group bus tours, consisting of around 50 people. This contrasted greatly to my tour in the North, where I was able to take a private tour to the DMZ. I usually avoid group tours whenever possible, but as there was no other option in this case, I went along with it, and was pleasantly surprised by how well-organized it was. It did annoy me to have to wait around and spend extra time on those details that didn’t particularly capture my attention, but I enjoyed it nonetheless.

ABOVE: Scale model of the Joint Security Area or “JSA”.

Bus tours to the DMZ in South Korea consist of two different destinations: the Joint Security Area (JSA), and the Korean Infiltration Tunnels. These can be done separately, as half-day tours, or combined into a full-day trip. I chose the latter, though I was to discover that the JSA tour was far more interesting, and to have limited my trip to here would have been sufficient.

ABOVE: To visit the DMZ’s Joint Security Area, at least one week of advance notice is required.

It’s not possible to decide on a whim to visit the DMZ’s Joint Security Area. At least one week of advance notice is required, for full passport details must be supplied at least that far in advance for approval. Still, this security measure has not been a deterrent for the 100,000 people who visit the area every year.

The tour begins bright and early – we were on the road by 7:30 am. As we coasted along the highway, the fortifications along the water, stretching all the way to the border, caught my eye. Electric fences and guard posts were a regular sight. In the past, North Korea had sent scuba divers into the South, along this coast, and the result was a hugely beefed-up security set-up by South Korea, in order to protect the country’s shores. I was surprised to note that the security was far more present here than on the North side.

ABOVE: Memorial ribbons at the “Unification Bridge”

Our first stop was Imjingak Park, which is also the location of the “Unification Bridge”, where we had our IDs checked. This area is home to the United Nations’ DMZ command post, also known as Camp Bonifas. This post was set up at the time of the DMZ’s creation, to monitor and enforce the Korean Armistice Agreement. The camp was so-named in honour of US Army Captain Arthur G. Bonifas, who was killed more than two decades ago, by North Korean soldiers, in what became known as the “Axe Murder Incident”. This incident sounds as brutal as it was, involving US officer Bonifas being bludgeoned to death after snubbing North Korean requests to cease the cutting down of a particular tree in the DMZ, which the North Korean soldiers claimed had been personally-planted and cared for by their leader, Kim Il Sung.

ABOVE: Scale model of the North Korean “Axe Murder” incident.

At this point, the tour was taken over by the US Army, who told us the area’s rules and regulations. The presentation included a speech and a slideshow. The whole operation was  tightly-organized, and  photo-taking was very restricted. Again, I was surprised to note that this was far stricter than on the North Korean side.

ABOVE: The renowned “Blue Houses” of the JSA.

We next moved to the JSA’s Freedom House, part of a series of buildings meant for joint meetings, in what is called the Conference Row. Here, we were escorted to a series of blue houses that line the actual border of the DMZ itself. Our group was divided into two, and my group was left staring out at the vast, undeveloped landscape that is North Korea. Three South Korean soldiers stood at the border, standing completely still at attention – this was an ominous sight indeed. To our surprise, a group of North Korean soldiers began walking towards the border – something our US Army leader told us was a rarity – and began taking photos of each other with our group in the background. It seemed we were celebrities for a moment.

ABOVE: We were very lucky that a group of NPA soldiers came right to the border while we were there.

We were then led into the blue house’s conference room. This is a significant place: it’s where all negotiations between the North and South take place. Passing two ROK soldiers stationed in the room, frozen in battle-ready stance, we wandered around and took in the room’s incredible cultural significance. Keeping in line with its name, the entire room is painted blue, and even the window trimmings match this theme. To be honest, the room was vastly overcrowded with the entire bus tour in there, but I waited for everyone to leave, and took a final glance around this room alone (well, OK, the soldiers were still there) before stepping out to rejoin my group.

ABOVE: Inside the conference room where all negotiations between the North and South take place.

Next, we passed the sinister-sounding “Bridge of No Return”, so-named because it was used as a prisoner exchange point in the past. This was also the location of the aforementioned Axe Murder Incident. Due to its fateful past, the area’s names carry nothing but negative connotations, and I could clearly see that South Korea also took part in the propaganda game.

ABOVE: The “Bridge of No Return” – which is the exchange point for prisoners between North and South.

We returned to Imjingak Park for lunch and visited the Unification Bridge, after which was the end of the JSA tour, and the start of our trip into the depths of the North Korean Infiltration Tunnels…

A TOUR OF THE NORTH KOREAN INFILTRATION TUNNELS

The second-half of the day sounded to me as if it would be rather Indiana Jones-esque: exploring secret tunnels dug by North Korea decades ago which, it is believed, were the epicenter of a planned military invasion route into the South. Four tunnels were discovered in 1974 by South Korea. North Korea claimed they were meant for coal mining, but no evidence of such a fact was ever found.

ABOVE: Recreation of the North Koreans digging “Infiltration Tunnel #3”

The tour started in the DMZ’s theater and exhibition hall, where we watched a movie about the tunnels. We learned about the four tunnels, and it was explained to us that tourists are only allowed to visit the third infiltration tunnel. We were informed that we must stow away camera equipment, though phones and compact cameras were permitted.

Though my group took the walking route, it’s also possible to take a cable car, something I later regretted not doing. Upon entering the tunnel, my first thought was that it was far deeper than I had expected, and far steeper as well. And we weren’t even yet in the actual tunnel the North Koreans had dug.

ABOVE: Deep inside “Infiltration Tunnel #3”

The tunnels are lined with sharp rocks, and it’s necessary for all visitors doing the tunnel route to wear a hard hat so as to avoid gashing one’s head on a jagged edge. Once we arrived at the North Korean tunnel, which runs through bedrock 73 meters below ground, we walked 15 minutes more to the end of the tunnel, which, to my disappointment, consisted of a simple rock wall with a sign. This made the long walk, which was uncomfortable since it was necessary to crouch the entire time, rather anti-climatic. Furthermore, it would not be enjoyable for anyone who’s claustrophobic. On top of all this, the walk back up the steep incline was quite hot. That cable car was looking quite appealing by this point!

As the tour came to a close, we stopped at the Dora Observatory, where it’s possible to peer through binoculars into the world of the reclusive North Korean state. We also checked out the Dorasan Train Station, which was originally meant to connect the two countries by rail, but is now unused for cross-border purposes.

ABOVE: Looking across the border to North Korea.

All-in-all, I enjoyed the JSA tour, but would have enjoyed the tunnel tour far more if I’d gone by cable car, and would have skipped the Dora Observatory and Dorasan Train Station altogether. But such are the trappings of group tours, and the big reason I usually travel privately! Still, it was an enlightening experience to see the DMZ again, a place that feels like the epicenter of tension between two countries who, despite the Armistice, don’t seem like they will ever get along. Seeing the DMZ from another angle, that of the South Korean side, was especially intriguing at a time when the tensions between South and North Korea are once again at a high.