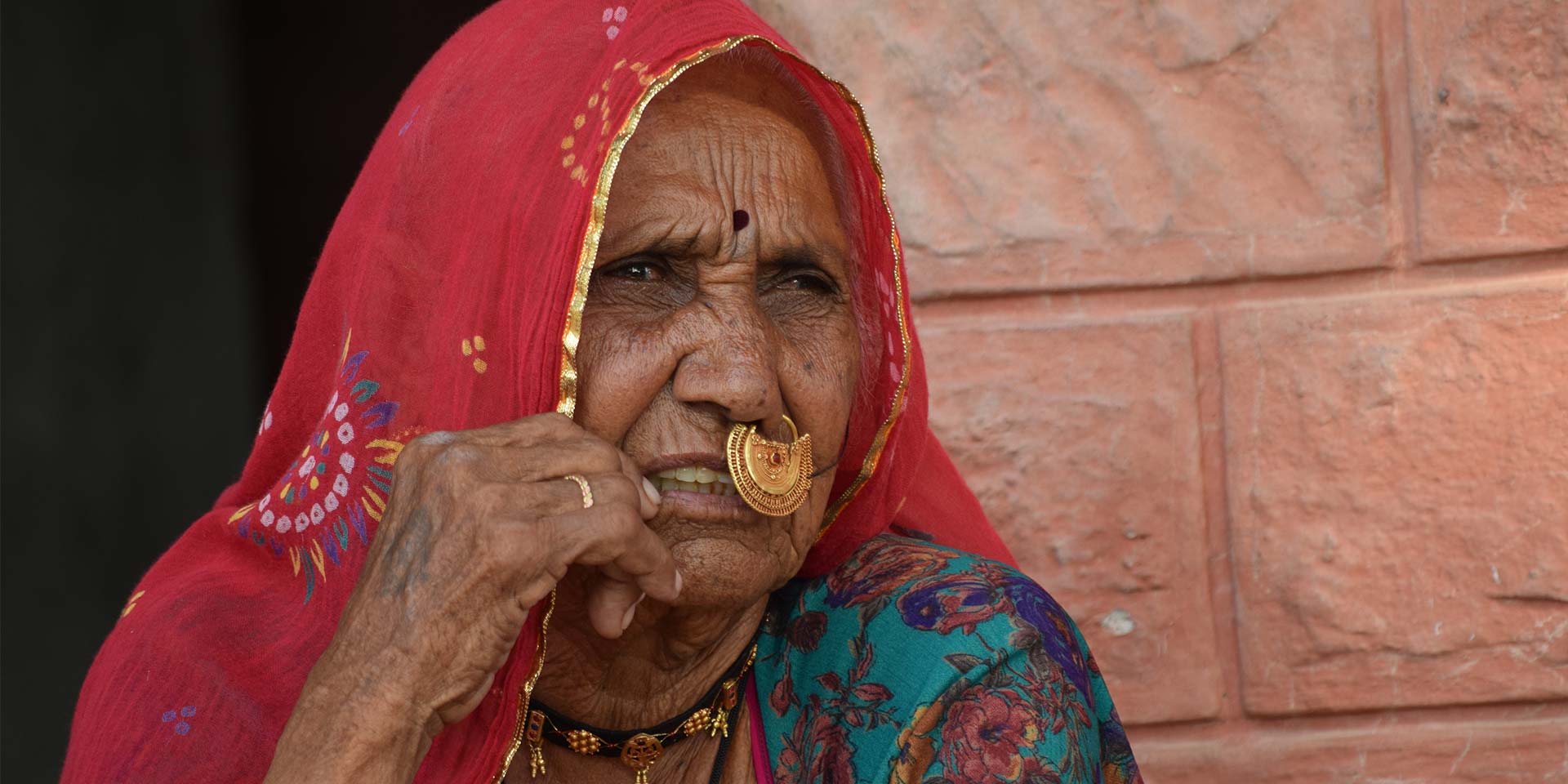 The asphalt track runs parallel to the parched brown earth that extends to the horizon. In the afternoon the scorching desert sun begins to mellow. Sunil swerved the jeep and we descended into the bumpy dirt track through the freshly harvested fields of wheat and millet growing sparsely amidst these harsh and inhospitable conditions of the Thar desert. We stopped the car at a clearing and switched off the engine. The only sound was that of the rustle of the leaves of the rather awkward, brooding trees that stood in the sandy barrenness.

“These are Khejri trees. I will tell you about them later,” Sunil says.

And suddenly we had company: a group of four gazelles, followed by a large herd of black bucks. From previous experience, I knew that as soon as I would take out my long telephoto lens, the herd would disappear. Sensing my hesitation, Sunil smiled.”‘Don’t worry. They will not think that you are aiming a gun at them. They roam fearlessly here, because this is the land of the Bishnois.”

The camp at Guda Bishnoi village is about 22 kilometers from the bustling city of Jodhpur but could well be a world away from it. The silence is almost sepulchral. In the evening we sat sipping the strong tea made from camel’s milk and I listened to Khemkaran Bishnoi, my host in this village camp. He told me the story of their community, the Bishnois.

In the later part of the 15th century, this part of Western Rajasthan was hit by severe drought and famine each year, and it was the custom to migrate to Malwa, a central Indian province, at the start of the summer. Legend has it that Jambeshwar, son of a local Rajput Thakur, stopped the migration by making a judicious distribution of grain among the people of the land. It was then, in 1485, he introduced the twenty nine principles of the Bishnoi sect (‘nish’ means twenty and ‘noi’ means nine). He became the Guru of the Bishnoi community.

“The two most important principles were prohibition of cutting of trees and protection of wildlife around us,” Khemkaran says. “And to this day a Bishnoi adheres to them until death.”

ABOVE: Chili and Bishnois.

The next morning we went on our way to Khejarli village, a 12-kilometer drive from Guda Bishnoi, the holiest Bishnoi sanctuary. In 1730, 363 Bishnoi men, women, and children sacrificed their lives to protect the khejri trees. They protested by clinging to the trees, which the king’s men had come to cut down to provide fuel for the cement lime kilns to build the king’s palace. According to folklore, the first martyr, Amrita Devi, had said as she courted death “a chopped head is a cheap bargain for a felled tree.” Their sacrifice is commemorated here in Khejarli, where all the martyrs were cremated.

A large mausoleum stands beside a Khejri tree, named Amrita Taru(Amrita Tree) and a temple of Guru Jambeshwar stands guard over it.

When I asked Sunil why the khejri tree so important (the state tree of Rajasthan), he said, “Because it is the most environmentally friendly tree here. It remains green even in the scorching summer here, when the mercury soars over 45 degrees celsius and it is wonderful as a shade tree for the crops.” Sunil says. “It is still a custom among us to buy khejri saplings from this village and plant them in our homes. We share water with the saplings for two years and then it can grow on its own. The wood makes good furniture, but a Bishnoi carpenter would never cut a green tree. [They] wait for the trees to die naturally.”

ABOVE: Opium ceremony with the Bishnois.

An early morning excursion to the temple of the Bishnois, 25 kilometers from Jodhpur, was a journey through the desert. A small religious ceremony was to be held in the morning. The chill was palpable as dry winds cut through the air and rattled my bones as soon as I got out of the car. It was 7.30 in the morning and already the havan (holy fire) was lit inside the temple. The high priest chanted and men in their traditional white attires and women draped in colourful sarees poured pure ghee (clarified butter) and coconut into the fire as they slowly circled it clockwise.

“It purifies the air and clears our passage to our Guru,” Vishudha Nand, the head priest explained as he took me toward the backside of the temple after the ceremony finished. We walked for around 300 metres and came to a clearing. Around twenty gazelles ambled about, picking up the grain and millet left for them by the villagers. “The Bishnois are supposed to share 10% of their food grains with the wildlife around them. It is one of our 29 strictures and we maintain it to preserve the balance in nature.”

A fawn walked toward us and the priest called out to her: “Aarti.” The little antelope fearlessly trotted in. Vishudha Nand said “Aarti’s mother died when she was born. A Bishnoi woman adopted her, breastfeeding her with her own children until the motherless fawn could be on her own.”

ABOVE: Caring for antelope.

I offered a couple of biscuits to Aarti. She accepted it and went on rubbing her nose on the priest’s orange robes.

Our next stop was Salawas, a predominantly Bishnoi village. Changes are afoot with traditional mud houses being replaced with modern urban architecture made of Jodhpuri stone. The young women seemed pretty comfortable as they sauntered through the village lanes dressed in the ubiquitous salwar kameez, a regular dress throughout northern and western India.

The flashes of vibrant red and orange veils of the older women were accompanied by elaborate nose rings extending up to their ears and heavy lockets and bangles. All of them, I was told, were pure gold.

I was taken to Jodha Ram’s house for the opium ceremony. An ancient custom among the Bishnois and still popular among the village elders, they believe that the drug has healing properties. In older days, fights between clans were often resolved through an opium ceremony.

The ceremony was an elaborate affair with village elders, impeccably dressed in white with turbans meticulously draped around their heads, took their turns. The feel was ritualistic, only the caustic smell of opium in its pure form was too strong.

On the way back, we briefly stopped at Guda Lake, one of the many water bodies in the Bishnoi area, painstakingly made by the Bishnois by preservation of rainwater in a land known for water scarcity. It is the watering hole of the gazelles and black bucks and also the home of migratory birds in winter. A few kilometers later, near Khejarli village, Sunil stopped the car and pointed to a large stone. “This is where Salman Khan had shot the two black bucks in 1998.”

I remembered the case. It received widespread media attention. Salman Khan, the Bollywood superstar, killed two black bucks. He was chased and accosted by the Bishnois and was handed over to the police. He was sentenced to a five-year prison term, but is still free. The pressures on the Bishnoi community to withdraw the charges have come from many quarters but to no avail.

“How could they think that a community whose ancestors have given so great a sacrifice to save trees would let go the killer of a deer, whom we consider part of our family? Do they know that even now, almost every year, a Bishnoi sacrifices his life trying to save wildlife from poachers and motherless fawns are regularly taken care of by our women?”

The furious tone of Sunil’s voice is reassuring. The 29 strictures laid down by Guru Jambeshwar will remain safe with next generation at least.