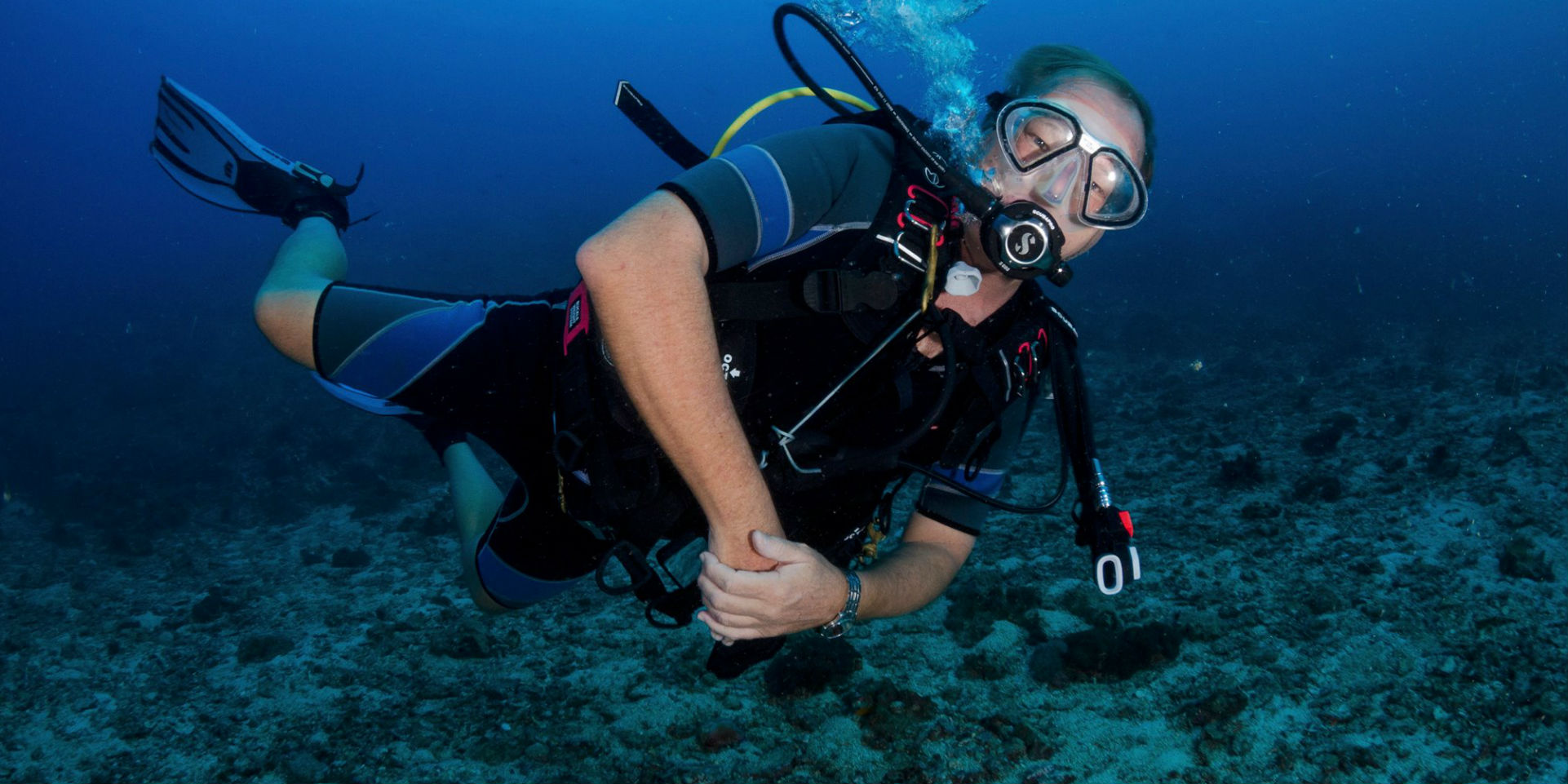 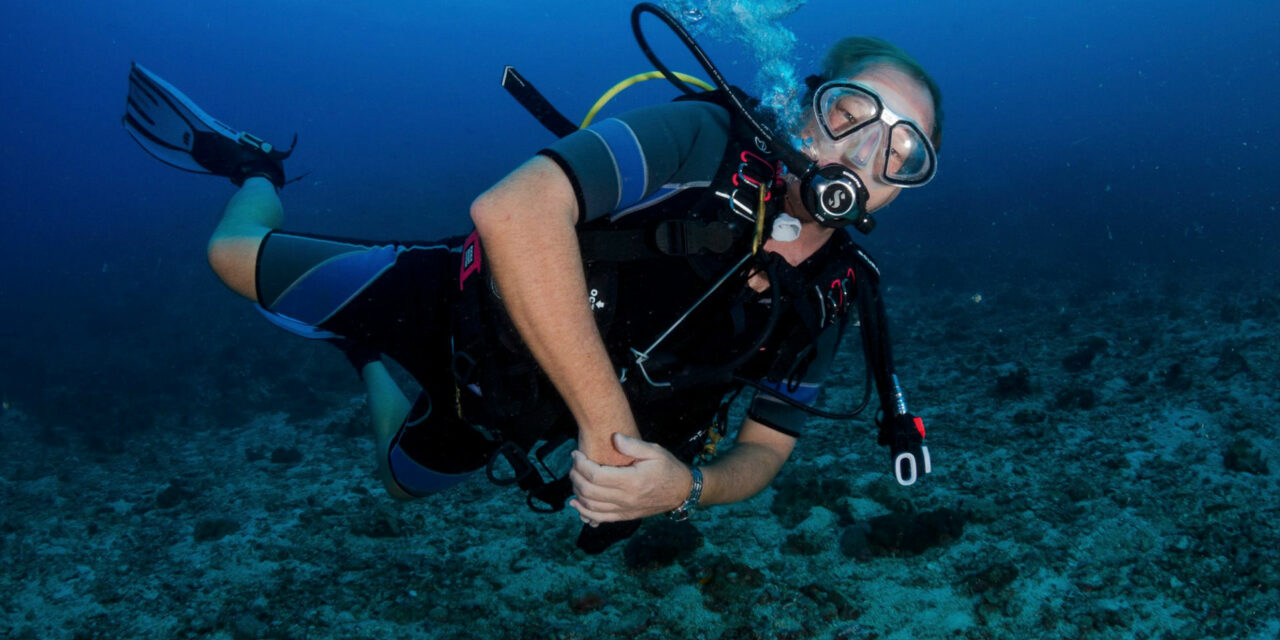 The warm ocean waters which flow to Thailand’s famous Andaman destinations – Similan, Phuket, and Koh Phi Phi – come from Myanmar’s remote south, where 800 tropical islands make up the Mergui Archipelago. Despite tales of blast fishing and bad press, John Williams of Siam Dive n Sail in Phuket points out that this area has some of the most diverse dives sites on earth.

One of the first westerners to explore the Mergui Archipelago, John Williams is the owner of has written or contributed to four guides on diving in Thailand, Burma, and the Andaman Islands and runs the Siamdivers.com and Indodivers.com websites.

John is quick to point out that, until December 1997, the area was completely off limits to everyone – including Myanmar’s own citizens. The area was inhabited by the Moken – a community sometimes referred to as sea gypsies – who were not considered to be citizens of Myanmar. The opening of the archipelago to outsiders began with divers.

Eyes Under the Mergui

ABOVE: With the opening up of the zone to divers, word of the Mergui Archipelago got around, and in the late 1990’s it began to flourish.

We sat down with a top commander and he asked us straight out: ‘Why do you show no interest in visiting our islands?’ We were flabbergasted and realized how stupid we had been. They were hurt that we didn’t want to visit their country.

Sick of what they felt was overcrowding in the Similan Islands, John’s was one of three dive companies that began to explore the waters between Myanmar and Thailand. In 1990, when GPS became affordable, they started exploring an area in international territory that looked, on the charts, like a series of underwater banks at safe, diveable depths. They dubbed it the the Burma Banks, which at the time was rich in sharks and other big fish.

They noticed once that they were being followed by the Burmese Navy, who explained that while they were technically diving in international waters, they were officially in Burma’s Exclusive Economic Zone. Over talks to negotiate permission to continue diving in the Banks, John describes a misunderstanding that led to an opportunity: “We sat down with a top commander and he asked us straight out: ‘Why do you show no interest in visiting our islands?’ We were flabbergasted and realized how stupid we had been. They were hurt that we didn’t want to visit their country. So after a few laughs we said we would love to, and came to a financial arrangement that continues to this day.”

With the opening up of the zone to divers, word of the Mergui Archipelago got round and in the late 1990’s it began to flourish. But with that came fishing. There is a particular controversy around blast fishing, but according to John, the outrage is misplaced. He admits that blast fishing got particularly bad in about 2005, but emphasizes that it didn’t cause as much damage as other activities.

“For passengers, it triggers emotion when they hear a blast, usually surprise, then anger. However, the idea that it caused more damage than say, long-line fishing, dredging, or using nets close to coral reefs is completely false. There are many types of destructive fishing practices. Long lining is what took the silvertip and nurse sharks out of the Burma Banks […] and once they are gone, the chance that the population will replenish itself is almost zero. This saddens us all a lot more than any blast fishing.”

“The only reason [blast fishing] stopped was that people figured out they could make more money from tourism than from blast fishing,” John says. Now, after almost ten years, during which time the area experienced yet more strife with a drastic coral bleaching incident in 2010, John says things are beginning to return to normal, and the waters of Mergui are now thriving once again.

“The area has a huge amount of biodiversity,” John expains. “Though we don’t see sharks much any more, we do see many small unusual creatures we divers call ‘critters.’” Mergui is rich in in these tiny treasures: seahorses, ghost pipefish, nudibranchs, crinoids, sea slugs, sea stars, crabs, shrimps, and anemones – all common and easily spotted. John claims that this type of “macro diving”, which is increasingly popular in Indonesia, is comparable and sometimes even better in Mergui: “We have species of fish you only find in Mergui. The reefs are teeming with marine life, much more so than, say, Sulawesi or Hawaii or anywhere in the Caribbean.”

For John, though, it’s spotting the bigger creatures that make the memorable moments. “At Black Rock a few years ago,” he recalls, “I saw two manta rays swimming alongside a whale shark, and then a three-meter swordfish came darting in and scattered them. The swordfish stayed around all day. It’s very unusual to see a swordfish while diving; they are usually only found in deep ocean waters, and the chance of seeing one is almost zero. [This was] only the second one I had seen in my 40 years of diving.”

“In the fall we always see mating cuttlefish, and they make great photographic subjects. I have seen up to eight tiger tail seahorses on a single dive,” John sasys. “This may not be as exciting as seeing sharks, manta rays, or swordfish, but it’s equally unusual.”

The Future of the Life Below

ABOVE: Recovering from exploitative practices, the Mergui Archipelago rides a delicate balance as the world discovers more of Myanmar.

As for the future of Mergui, now that its popularity is growing, John hopes that the government will continue encouraging ecotourism rather than large-scale development of resorts on the islands. “My wish would be for the whole area to be made a Marine Protected Area (MPA) under the direction of UNESCO or some other organization. This would make one of the largest protected areas in the world … It would also benefit Thailand’s fisheries and tourism economy, as [Thailand] would continue to be the ‘gateway’ to the Mergui Archipelago.”

Despite having been open for 20 years (almost 30 if you count John and his friends’ explorations of the Burma Banks), it’s only in the last few years that the the world has become enamored with the Mergui, and it is very possibly the next big thing to take the diving world by storm.

For more from John, check out his Lonely Planet guide, “Diving Thailand and Southeast Asia” and the siamdivers.com and indodivers.com websites for top aquatic tips.