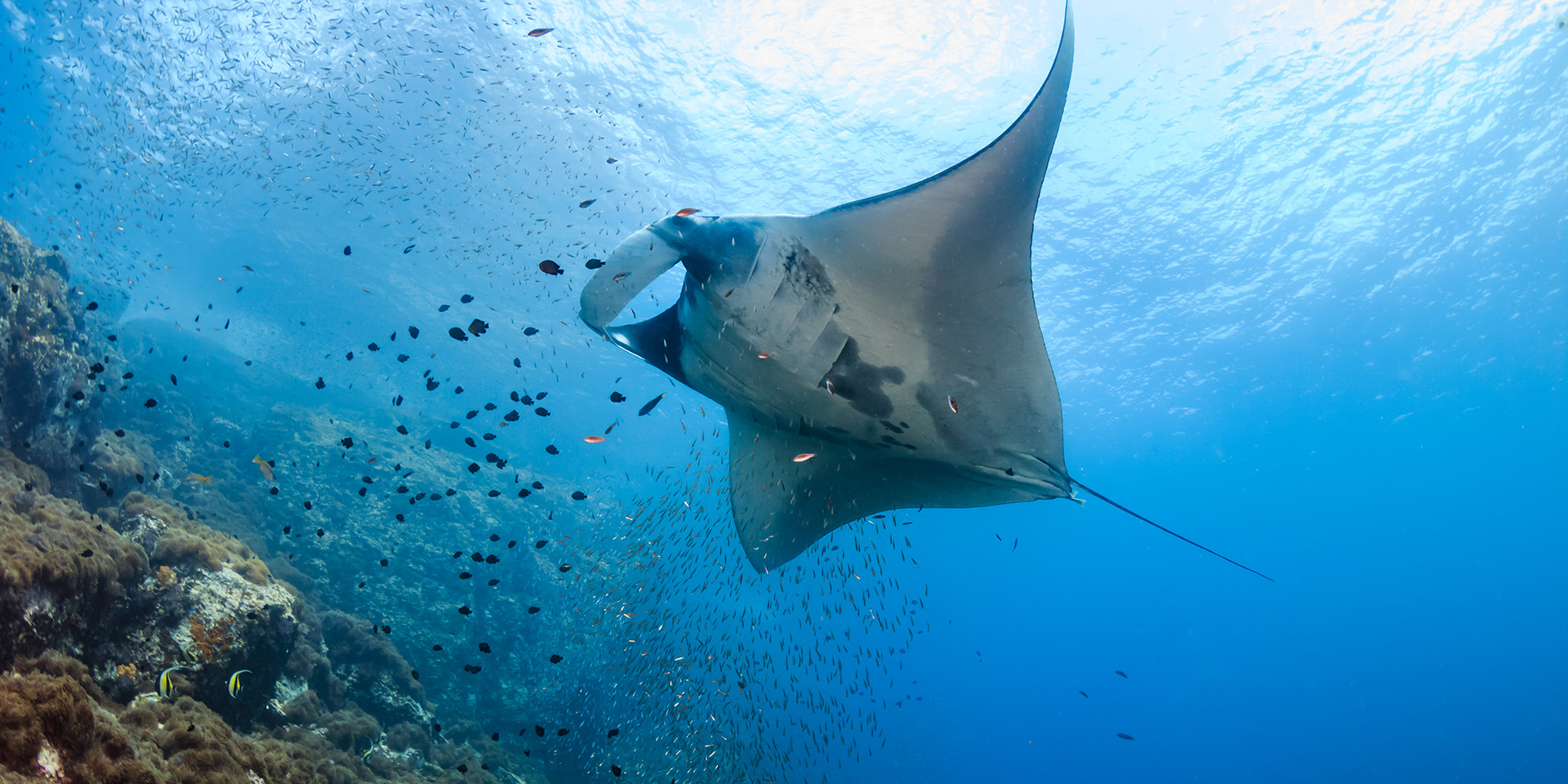 Myanmar opened up to tourism just a little over 20 years ago, so the Mergui Archipelago and Burma Banks are especially high on many divers’ bucket lists. With over 800 islands over 12, 000 square kilometers, it’s easy to understand why.

The Burma Banks are found about 125 kilometers west of Kawthaung (the southernmost city in Myanmar) in international waters, though in an economic zone of Myanmar. The Banks – Big, Silvertip, Rainbow, Roe, Coral, and Heckford – are vast sea mounts that rise up from a depth of around 350 meters to within 15 meters of the surface.

ABOVE: Snorkeling at Black Rock in the Burma Banks.

Everything about Burma Banks is big, from the sea mounts to the sharks. Silvertips of between two to three meters in length and nurse sharks up to three meters in length are commonly found around Heckford Bank. Ironically Silvertip Bank offers the best opportunity to see white and black-tips. Divers might also see a tiger or hammerhead swimming past. The Burma Banks offer excellent open-ocean diving, with drift dives of over a kilometer – a great opportunity for advanced divers.

Black Rock is about 160 kilometers northwest from Kawthaung, closer to the coast than the Burma Banks. It is a lone islet about 80 meters wide and the surrounding waters is home to many large fauna. White, black, and silver-tips are often seen in the area. Mobula rays are also seen in abundance, with schools of manta and eagle rays soaring around the deep north-western corner of the island. Marble stingrays and leopard sharks can be found on the sandy bottom.

The boulder slopes on the south side of the island are home to massive barracuda- measuring over 1.5 meters long and reef sharks and perhaps even bull sharks can be seen on the south western side of the island. Currents around Black Rock can be strong and down currents are often present, so divers stay closer to the rocks and within the shelter of the island’s east and west tips.

ABOVE: Manta Ray in the Burma Banks.

For the Mergui Archipelago there is the North and South Twin Islands. North Twin Island can have strong currents but it also usually has exceptional visibility. Added to that is the chance to see zambezi (bull) sharks, leopard sharks, manta rays, eagle rays, hawksbill turtles, and rainbow runners.

The reefs around North Twin Island are reminiscent of those found in the Similan Islands in Thailand, with large granite boulders and swim-throughs covered in purple soft coral. Seahorses and ghost pipefish can be seen hiding amongst the seafans.

South Twin Island has a similar typography to North Twin Island with white tip and nurse sharks hiding under the boulders. This is also an ideal site for night diving as currents are usually mild and visibility excellent.

Tower Rock, 200 kilometres north of Kawthaung, is the place to go to see manta rays. Schools of these magnificent creatures are usually found around Tower Rock, mingling with schools of devil rays and colorful tropical reef fish. Black tip sharks can sometimes be seen swimming through the swim-throughs created by the boulders. The currents around this dive site can be strong, making this an ideal dive for advanced and experienced divers.

Western Rocky is the southernmost dive site of the Mergui Archipelago, a chance to see whale sharks and white tip reef sharks. The site also has interesting typographical features that include a cavern with an archway swim-through and a tunnel that runs through the center of the island, home to huge lobsters and nurse sharks. Be warned, though, sharks can block the way through.

Although some natural light penetrates the tunnel and can be seen for its entire 30-meter length, it is recommended that only experienced divers with cavern diving qualifications enter the tunnel as some of the areas can be quite narrow.

The diving season in Myanmar is between October and May; for clear skies and calm seas, visiting between December and April is recommended. Plankton blooms between February and May bringing reduced visibility but also a higher chances of seeing manta rays and whale sharks.

The water temperature around the Mergui Archipelago fluctuates between 26°C at the beginning of the season, and 30°C towards the end of the season.