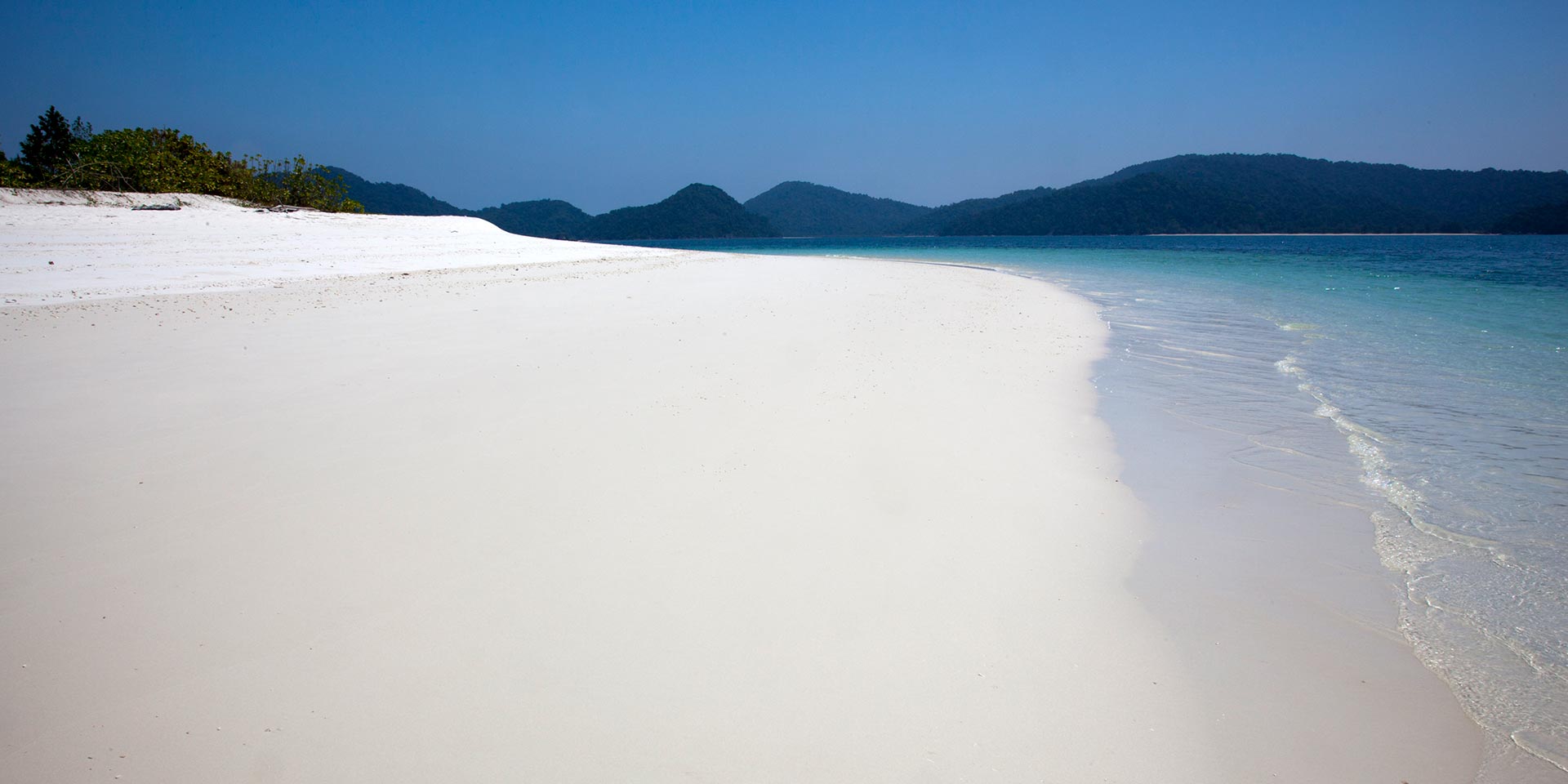 Myanmar is a place of often understated beauty, and one of the country’s least-known and least-visited parts is the Mergui Archipelago. Over the first decade of the 21st century, the number of tourists who came to the region per year numbered between 1,400 and 2,300. It’s a steady but a small number which echoes the notion of exclusivity and privacy that await lucky visitors who make the trip to this remote archipelago of over 800 islands tucked into Myanmar’s southernmost corner, in the Andaman Sea.

The islands were once used as a place to banish political prisoners (Christie Island being the nexus), but in the “New Burma,” the page has turned. In fact, this little-known island destination may someday become the next great place in the nation, if not the entire region.

For Remote Lands clientele, a visit to Mergui will include boating, diving, exploring uncharted beaches, photographing, fishing and encounters with the Sea Gypsies, who have lived their traditional ways of life upon the ocean for centuries. For those in search of an escape that’s off the beaten path, unusual and authentic, Mergui has enticing prospects.

I’ve been traveling to Myanmar for more than 20 years now, but only became aware of the Mergui Archipelago in the last few years. I had thought it was just a place for diving, and never gave it much consideration.

In the past few years, many live-aboard diving boats from Thailand have operated in the archipelago, but due to their high operating costs, and less-than-spectacular coral (especially when compared to world-class diving destinations in Indonesia) most of these boats no longer operate. A hardcore diver friend who has never been to the area even went so far as to proclaim that Mergui “is over.”  I would argue that it has not yet begun. As of today, Mergui is a soft diving and snorkeling destination per se. Many of the reefs have been dynamited, and the area lacks the huge quantities of fish boasted by the nearby Burma Banks, where the big fishing is.

Few of Mergui’s islands are inhabited. There are hundreds of beautiful white-sand beaches, mostly untouched and undocumented by guide books. You’ll be hard-pressed to see another tourist there during the entire length of your trip. I saw one other boat right after leaving port, and then for the next five days didn’t see a single foreigner at all. There are very few places in the world that are this beautiful, this pristine, and so free of tourists.

On the trip, I accompanied a journalist and photographer who were working on an article featuring the area. Our quest was to find the Moken — the local name for the Sea Gypsies who inhabit the area.

To begin, we flew from Yangon to Kawthaung, stopping on the way in Dawei and Myiek. The flight took longer than it should have because of these two stops, and due to the fact that we were flying on an ATR turbo prop, which are very common in Myanmar.  After picking up some supplies that included two huge bags of rice and a case of whiskey that we planned to give to the Moken, we boarded our private sailboat. Our captain was a Norwegian named Freddie who had clearly spent most of his life on sea.

Freddie had a bevy of stories about sailing around the world and operating a dive business in the Red Sea. He had also spent 12 years sailing in Mergui, which I’m quite certain made him one of the most experienced in the area. He knew every island, every village — seemingly everything — about the area. In the past, it was required to have a sort of “government minder” onboard every tourist boat passing through the area. These days, that “rule” has been somewhat relaxed. We did have a guy working for the Myanmar Tourism Department come along with us, but he was fantastic — taking care of everything from cooking to diving. We also had a Thai ship-hand who was deaf and mute, and funnily enough, he ended up “talking” more than anyone on the boat. He was a great guy.

One day while we were sailing, Tom, the photographer, noticed a nice-looking island with a pristine, white-sand beach that he wanted to photograph. We let him take photos for a while and then took the dingy ashore to join him. What we encountered was one of the most amazing beaches I’ve ever seen: beautiful sand with crystal clear water. The captain, despite his years of experience in the area, had never before come to this beach. We wondered if anyone had; it was that perfect. It’s moments like these that show me why devoting my life to travel has been the best decision I’ve ever made. Since this island had no name, we proclaimed it “Parker’s Point”.

Finally, as our trip continued to unfold, we made contact with the Moken. In the past, Sea Gypsies lived their lives almost entirely on the water — living in long boats and then towing smaller boats behind for each family member. Only during the rainy season when the sea became too rough would they take to land for a few months.

These days, however, the Moken are mostly living in villages on land. We visited numerous such villages during our five days in the area. We’d heard that the Moken were amazing divers, using only goggles to dive down to a depth of up to 30 meters. Experts at their craft, they can spear fish by hand and live entirely off the sea.

While visiting the Moken villages however, it quickly became clear that these people were proverbial “fish out of water.” They didn’t belong on the land, and it was obvious. To begin with, the villages were very dirty, and there was garbage and broken glass strewn everywhere. The Moken don’t have a history of using packaged goods, and they obviously didn’t have a history of throwing away their trash either. While this trash problem can be found in many Southeast Asian villages, it was particularly acute here.

Although this was obviously ecologically unsound, and a big problem that I witnessed in every village where we journeyed, there remained something quite unique and interesting about these people. For one thing, the Moken have a unique style of boat, constructed from a single tree, and they row while standing up in similar style to what I’ve witnessed in Vietnam.

We interviewed many Moken as we made our way through their villages. The older generation all told us they preferred to live on the sea, but the Myanmar government wants them to settle in villages on the land. Unfortunately for them, that’s not something that looks likely to change in the near future.

The Moken are still, first and foremost, fisherman. They make their living off the sea. Strangely, they also have a symbiotic relationship with the Burmese fishermen who have come to settle in the same villages. Each Moken village we visited had places the Moken homes closest to the sea, with the larger Burmese settlements behind. The Burmese had set up shops, and sell all the modern packaged goods with a heavy focus on alcohol — whiskey in particular.

We encountered numerous Burmese fishing boats and talked to them about their lives as well. Some were collecting puffer fish, which we were told they sell to Mainland China for $375 per kilo. That seemed like a fairly good living, judging by the large number of puffer fish hanging out to dry on the boats. Other Moken go fishing for squid during the night, their lit-up boats highly visible throughout the night.

The Moken however, were just one of the many touching aspects of my travels around this beautiful part of Myanmar. The scenery throughout Mergui was stunning and completely pristine. We visited Lampi National Park, the largest in all of Myanmar. Lampi is known for its verdant mangroves.

It’s a hauntingly calm place — you don’t see much animal life on the surface, but you know it’s there. The jungle is thick and impenetrable. To venture inland here (or in fact almost anywhere we saw in Mergui) you’d have to don machetes and be prepared for a tough slog. We were told that the Myanmar government had released five elephants to Lampi, but they are rarely, if ever seen. In past times there were also crocodiles here — one of the villages we visited had a live crocodile kept in a small pool inside a temple.

From these travels, I earned a greater understanding of the magical-yet-understated allure of southern Myanmar. Perhaps this is, after all, the next great place in Asia.