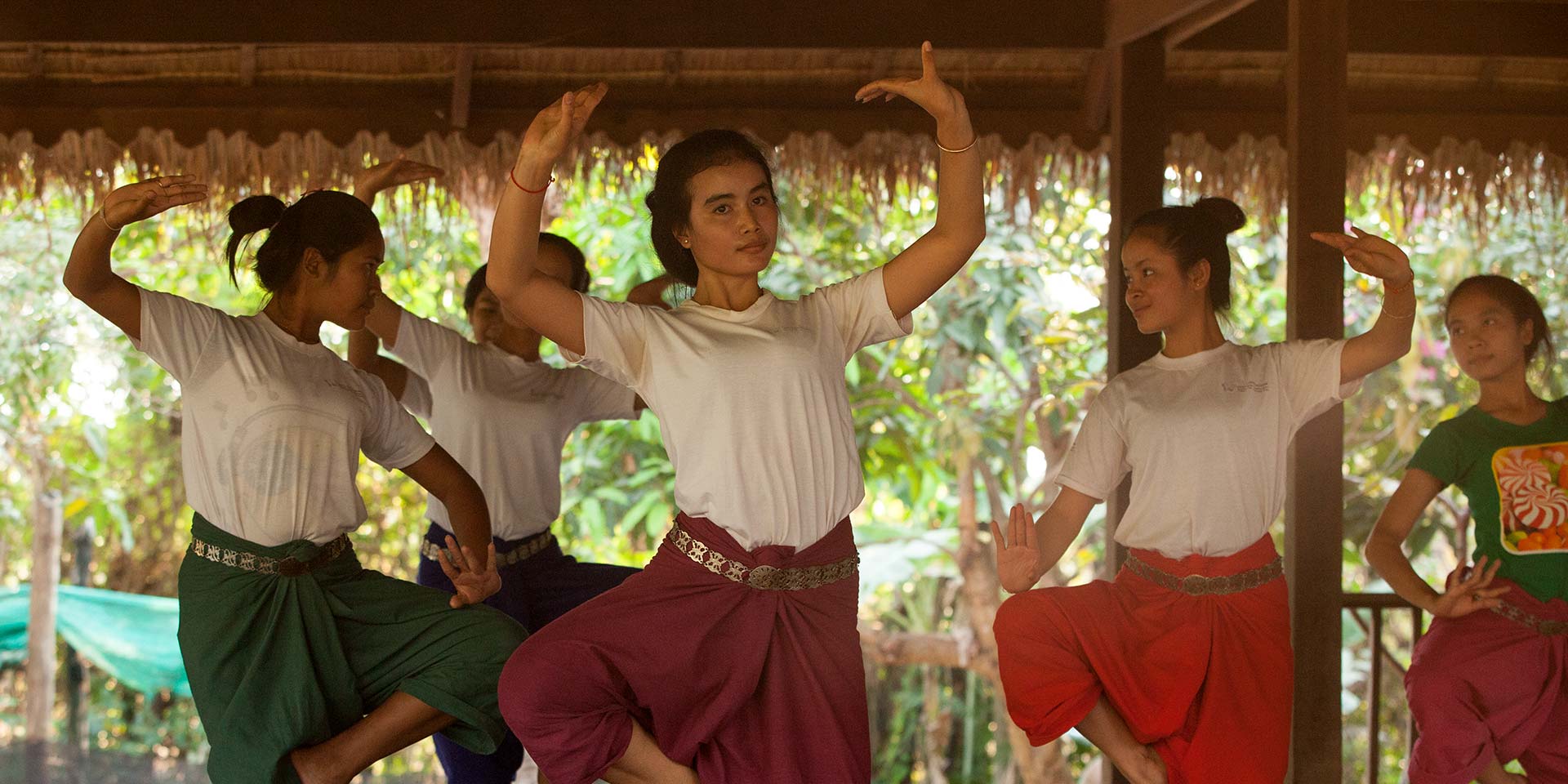 Home to one of the wonders of the world, not to mention several others that could arguably be considered for the big seven, Siem Reap, Cambodia is packed with sites of interest that may seem daunting to navigate. The key is prioritization: for me, these are the eight experiences you really can’t miss — from the deservedly famous to the more obscure — plus a few handy hints to getting the most out of your visits.

No trip to Siem Reap would be complete without a visit to Cambodia’s iconic temple, the world famous Angkor Wat, and you won’t be there long before you discover that you’re not the only one for whom it tops the list. The key is to arrive early — it’s best to leave your hotel at around 5 a.m. — and grab a spot around the back. While the front is certainly the “classic” sunrise viewpoint of Angkor, I prefer to explore it from a different perspective, away from the hundreds (or thousands) of other tourists. In fact, on my first visit to Angkor Wat, my guide and I snuck into the rear entrance of the temple in the pitch dark, past sleeping security guards, and then climbed up the steep, narrow steps to watch the sunrise with only a few other people around. In recent years it has become harder and harder to escape the crowds, but if you make the effort, you will still have a good experience. By the same token, most tourists follow the same route to explore Angkor so it’s a good idea, if you can, to do it in reverse order, as it is more likely you’ll avoid the crowds.

Despite being overrun with bodies, Angkor Wat is simply stunning, and as the largest religious monument in the world, that’s no surprise. It was built in the 12th Century by King Suryavarman and formed the site of the capital of the mighty Khmer Empire. Originally dedicated to Vishnu, it was a Hindu temple, but towards the end of the century, it became a sacred site for Buddhism. The modern name Angkor Wat literally means ‘city of temples’, but as the original foundation stone has never been uncovered, its original name is unknown.

Ta Phrom was constructed in the 12th Century by King Jayavarman VII and made famous by the movie “Tomb Raider”, starring Angelina Jolie. The temple is notable for the huge trees growing all over the ruined temple structures. Ta Phrom is quite large and if you manage to get there right after sunrise, it is often still possible to avoid the rush as other visitors tend to linger at Angkor. This is among my favorite temples in Cambodia and unlike some of the other main sites, Ta Phrom has a natural feel to it thanks to less interference from restoration. It is also possible to do a tour here with a local archaeologist, which adds significant depth to your experience and understanding of the history of the area.

Lesser known Phnom Kulen is located approximately two hours’ drive from Siem Reap. Comprised of a mountain ridge and national park, it’s the site of the ancient capital of Mahendraparvata, and its significance has only recently been understood. The name means ‘mountain of Indra’ for the Hindu god of the sky, rain and prosperity. The area also houses the quarry from which most of the materials to build Angkor Wat and the other major temples came.

Apart from the stunning natural beauty, the highlights in Phnom Kulen include a bat cave, where an eccentric group of monks are known to meditate and sleep. There’s also Srah Damrei, where you’ll see an enormous stone carving of an elephant and two lions, covered in moss. And different, but equally impressive, is Kbal Spean, which is known as “the river of a thousand lingas” for the hundreds of sandstone lingas carved into the riverbed. Phnom Kulen is also home to the largest reclining Buddha in Cambodia, known as Preah Ang Thom: this 60-foot gold Buddha dating back to the 16th century sits nestled within a small mountain.

If going somewhere with no tourists is a priority, Phnom Kulen is a fantastic day out of town. The scale of sites here is smaller than most well known temples in Siem Reap, but you will feel like a true adventurer exploring these ruins on the back of a motorbike.

Though it’s approximately 25 miles from Angkor Wat, a visit to Ben Mealea is well worth the trip, and if you can make it for sunrise, you will probably be the only one at this huge ruined complex. Beng Mealea, which means lotus pond, is my absolute favorite temple in Cambodia; it is very similar to Ta Phrom with a “Tomb Raider” feel, and, besides the huge plus of avoiding the crowds, I love that it has not been restored. The are enormous piles of carved sandstone rocks strewn all over the place, overgrown with trees and jungle, and you will find yourself climbing over and around them as you explore.

It’s thought that Beng Mealea was built in the 12th century and, like many others, it was originally a Hindu temple though there are also some Buddhist carvings to be found. The true history of the temple is unknown; it can be dated only by its architectural style, which is almost identical to Angkor Wat, so it is assumed by scholars to have been built in the same era.

If you are feeling templed out after a couple days in Siem Reap, it is nice to head to Tonle Sap Lake and explore some of the floating villages in the area by boat. The lake connects with the Mekong river; it’s the largest in all of southeast Asia and famous for the unique behaviour of its water flow. During the cool and hot seasons, water flows from the lake to the Mekong, but when the monsoon rains raise the water level of the Mekong, its increased volume drains into the great lake. In Phnom Penh, the time when the reversal happens is celebrated with fireworks and boat races.

The most popular floating village to visit is Chong Khneas, but it’s worth making the effort to go farther out to Kompong Phluk and Kompong Kleang to avoid other tourists and mix with locals who are less dependant on tourism revenue. Many of the people living on the Tonle Sap are of Vietnamese or Cham ethnicity, and it is quite interesting to see how they live in their floating communities consisting of houses, schools, restaurants, shops, and even a crocodile farm. Seasonality plays a large role here, and rainy season, when the water level is high, is the best time to visit Tonle Sap and Siem Reap in general, as the countryside will be a brilliant green instead of dusty and barren.

Banteay Srei is a 10th-Century temple dedicated to the Hindu god Shiva. It is one of the most unique in Siem Reap, with pinkish hues and extremely intricate carvings. Although Banteay Srei is on the outer fringe of the Angkor complex, it is now firmly on the “tourist circuit”, and you would be well advised to visit early in the morning or late in the afternoon to avoid sharing the temple with bus loads of visitors.

If you are lucky enough to check it out while there are few people, Banteay Srei is a magical place. Built mostly out of red sandstone, Banteay Srei is also known as the “citadel of women”, and though it’s smaller than some of the other highlights, the level of detail in the carved bas reliefs is astounding.

It is also distinct in that it’s the only temple in the Angkor complex not built by a king: its design and construction are widely attributed to courtiers named Vishnukumara and Yajñavarāha, the latter being a counsellor of King Rajendravarman II and grandson of King Harsavarman I.

Famous for its large and iconic carved stone faces, Bayon is a site that cannot be missed. There are often many tourists here, so once again timing is very important — sunrise or shortly thereafter is the best time to visit. At the center of the walled city of Angkor Thom, Bayon is in the very heart of the Angkor Archeological Park and features around 50 towers, each with four carved faces looking to the four points of the compass. The faces are smiling with closed eyes and there is much debate over what they represent. Some theories suggest they represent the face of a Bodhisattva (Buddhism’s compassionate and enlightened Being), while others say the faces are that of King Jayavarman VII.

Aside from the mysterious visages, Bayon is richly decorated with bas reliefs depicting epic scenes of battles, religious rituals and everyday ancient life.

If seeing nothing but temples starts to leave you feeling cold, I recommend a visit to the Conservatoire of Apsara Dance. They put on a special dance performance called “The Sacred Dancers of Angkor”, which is the most authentic apsara show in Siem Reap (and possibly all of Cambodia). For me, however, the best experience was visiting the dancers during a practice session near Banteay Srei and getting to know more about them through their founder, Ravynn Karet-Coxen.

After a couple hours with Ravynn, I was convinced there is no one in the country more passionate about preserving the traditions of Cambodian dance, many of which were lost during the Khmer Rouge era. Her enthusiasm extends beyond the art form to the betterment of the lives of the young girls who study with her, most of whom are living in poverty.

Conservatoire of Apsara Dance is a class act, and no mere tourist show. If there is one place where I’d suggest making a donation in Siem Reap, it would be here.