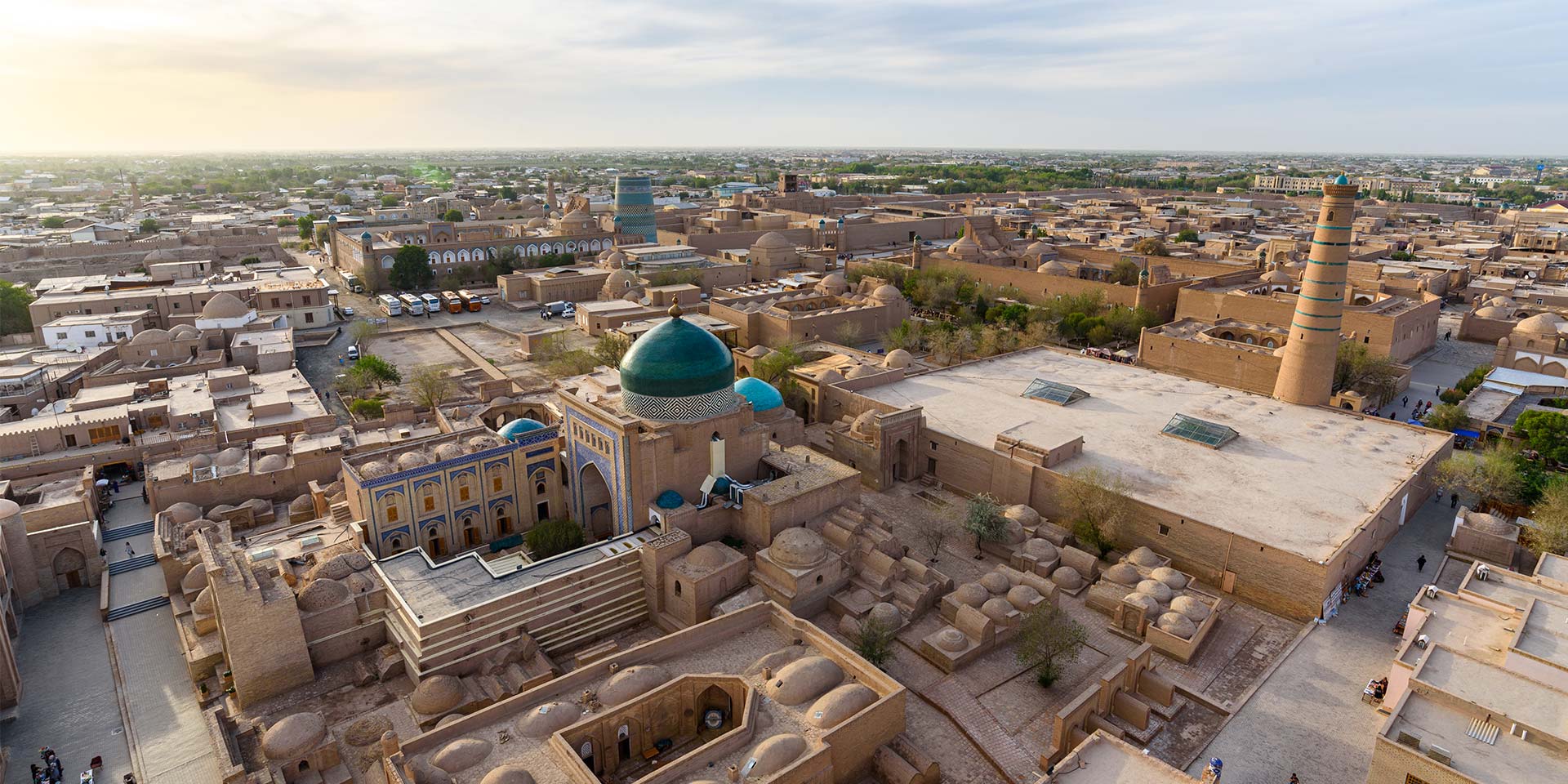 As traders and travelers traipsed along Central Asia’s ancient silk road, the city of Khiva was a hub for culture and capitalism alike. The streets today are lined with salesmen, the bazaars in full swing, the days of traders with their camels and cloths, spices and silks, live on in the sandy streets of Khiva. Untouched by modernity, a desert road lined by crumbling caravanserais leads to the towering gates of the historic city walls.

Devoid of car horns or shops bleating pop songs, the noise of Khiva comes from shouting merchants, to the steadily rising voices of buyers haggling down their prices. From the banging and the whirring from the craft men’s workshops, to local families bustling through bazaars, all occasionally punctuated by the ubiquitous calling prayer, emanating from the towering central minaret.

Within the city walls, Khiva is a complex of sand-laden alleyways and medieval madrasas. An essential stop for any traveler interested in the long and turbulent history of the Uzbek silk road.

Amongst the sand dusted shopfronts and beige blur of Khiva’s inner-city streets, the minaret towers tall and turquoise over all. With inlaid majolica designed to mimic the style of the 14th century minarets that once dominated the city skyline, this structure itself was only built in 1908. Despite its age, and its former glory under the Khiva Khanate, the city has been destroyed and rebuilt so many times that the modern town is a living tribute to the historical site that once stood.

In turn, the minaret was ripped down by history’s most infamous invaders: Alexander the Great, the Arabs, Ghenghis Khan’s Mongol horde, Uzbeksitan’s own Timur Lane. In an effort to claw back some national identity and history, much of Uzbekistan have taken to celebrating the ruthless Uzbek warlord Timur Lane. Born just south of Samarkand in the early 14th century, Timur went on to slaughter roughly 17 million people in his conquest of an empire that stretched from Ankara to Delhi. He massacred civilian populations in once-great cities, including Damascus and Baghdad, leaving a trail of corpses and severed heads so gruesome they rivalled his steppe predecessors from height of the pillaging of the Mongol empire.

ABOVE: The minaret from below.

Despite this, he is hailed as a hero in towns like Samarkand and Bukhara, where statues are built of the tyrant and legends of mystical power and destruction have sprung up around his burial sites even long after his death. In Khiva, the narrative is far different.

Timur didn’t just level Khiva once. In fact, he came back for the people of the trading town five times, slaughtering civilians and destroying homes, mosques and livelihoods.

From the top of the minaret you can look over the ancient trading town, and you can get the best view over Khiva’s walls. As the oldest standing walled city in Central Asia, their rich history of invasion may not stand as a testament to their efficiency.

Khiva is often described as a town within a town. There is modern Khiva, with its cars and its supermarkets, separated from the walled city of ancient Khiva. Inside these walls, property cannot be bought by new investors or outsiders looking to move, and instead can only be passed down through the hands of the locals. There is very little artificial lighting, no signs marking store fronts, little to indicate that Khiva has developed from its ancient beginnings. While luxury hotels like Orient Star prove that the city is very much keeping up with modern trends, Khiva’s aesthetic is very closely maintained inside the city walls. Again, their long history of intermittent destruction and subjugation has made them fond of their ancient roots.

The walls themselves are an impressive introduction to Khiva. They were originally built to defend the city from would-be invaders who arrived in the form of the Mongol empire in 1220, razing the walls and the city in turn. Yet, they rebuilt. As with much of Khiva, the people’s collective resilience is manifested in their built and rebuilt homes, mosques and fortifications. The walls that currently line the city were built in 1790, when the silk road slave trade had brought riches and fame to the once-obscure trading post at Khiva. With ease of trade and transport at front of mind, the walls were fitted with gates facing north, south, east and west, signifying their position at the center of the trading world. The slave market took place inside Palvan gate.

Due to its central position, the city was an ideal spot for Turkmen and Kazakh raiders who had kidnapped steppe tribesmen for sale as slaves. The markets filled with Persian-style rugs, wooden crafts and colorful spices piled high in burlap bags, were once the same ones filled with more slaves than any other trading post on the silk road. In 1819, one visitor estimated that the city’s markets housed around 30,000 slaves. The prosperity that the city saw during their time at the forefront of the Central Asian slave trade also contributed significantly to the power of the Khivan Khanate.

ABOVE: Wooden interior of the Djuma Mosque.

Early in the 16th century, Khiva became the capital of its own Khanate. It was during this period that most of the city’s most ambitious architectural projects were undertaken, many of the most magnificent of which were mosques and madrasas. Djuma mosque, supported by wooden pillars repurposed from various eras of conquest, sports various eras of engraved messages written in the languages of their era’s conquerors. The unfinished madrasa Shirgaziz-Khan, another testament to Khiva’s dark history, shows the moment at which the slaves ordered to build the structure rebelled against the Khan, killing him and abandoning the project. His mausoleum stands adjacent to the unfinished madrasa.

Amongst the largest of the city’s religious sites is madrasa Muhammad Amin-khan, bearing the name of the last of the khan’s to rule over the city prior to being resigned to quasi-independent status under Russian protectorate. The inscription carved into its walls hold a hopeful message for the built and rebuilt city: ‘This perfect city will stand for eternity, enlightening our descendants’.

The turbulent history of the city has not quelled hope for a peaceful future, and for the preservation of this relic of the most ancient days of the silk road.

ABOVE: Said to have been build by Noah’s son Shem.

The earliest of Khiva’s legends is based around the well that marks the center of the old city. While the Armenians may lay claim to Noah and his ark, Khiva has claimed a slice of the biblical hero’s history for themselves. Noah’s son Shem, finding himself stranded in Uzbek sands, was compelled by a dream to build a city on the site where Khiva now stands. Our guide informed us with absolute certainty that the well that still stands was constructed by Shem, having dug into the sands and constructed the oasis city from the waters hidden below.

Whether or not you are inclined to believe Khiva’s biblical origins, the city is one of the oldest in all of central Asia, having existed since the 5th century BCE.