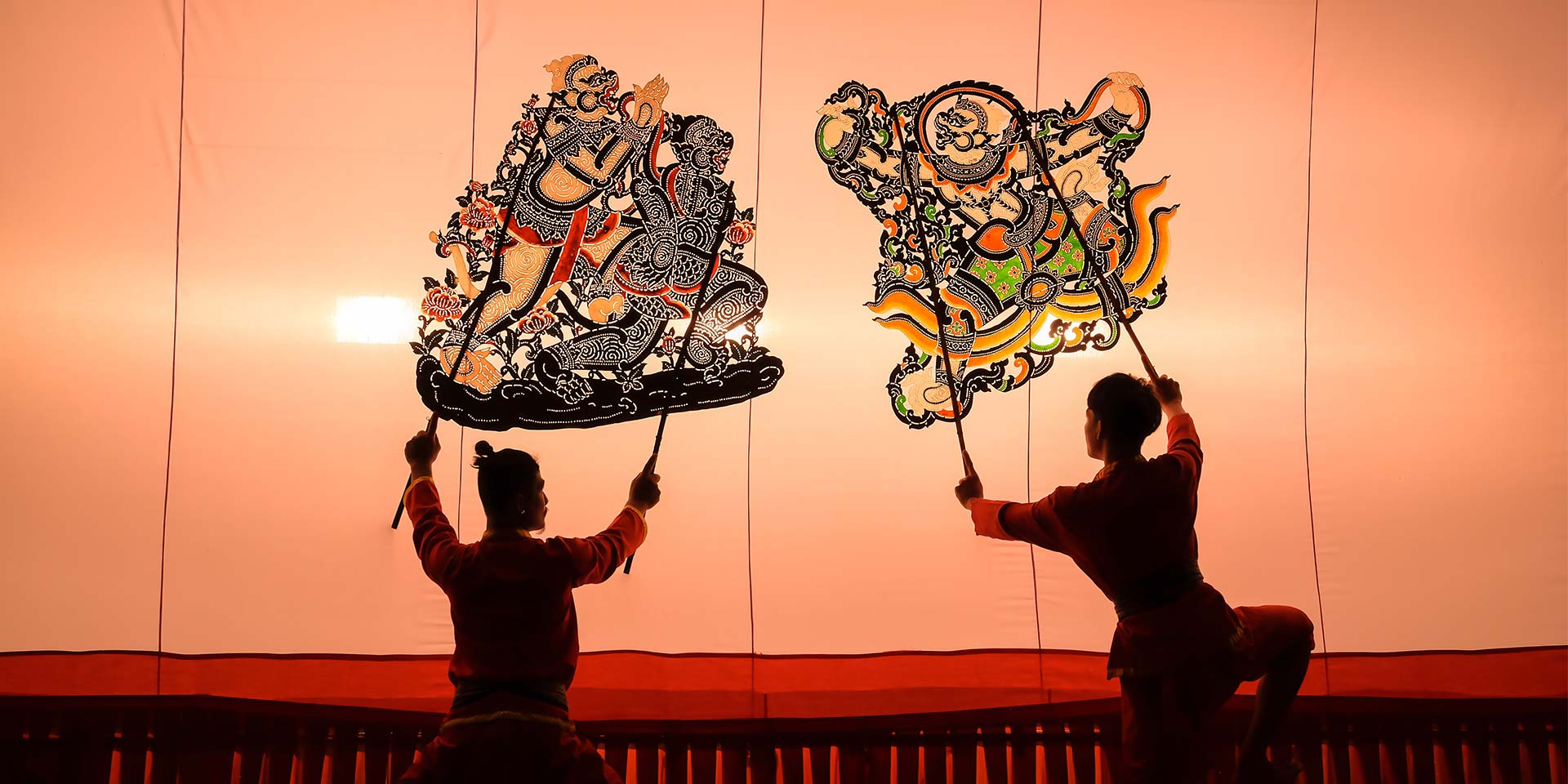 An hour and a half drive from the heart of Bangkok on the outskirts of Ratchaburi city, cars and buses arrive at a secluded temple surrounded by old growth trees in the rural Photharam district to see a centuries-old performance. A few hundred spectators take their seats as the lights go down and music crashes through the speakers. The narrator sets the scene, and the first performers appear as dark silhouettes against the backlit screen, their intricate puppet characters held aloft. For the 30 minute scenes from Thailand’s ancient tale of creation, the Ramakien are acted out by performers who cajole their puppets to dance, strut, and fight.

“There is still enough enthusiasm among young people to learn the dance, maybe even a little more now than when I was young,” says Khun Charon, the show manager and caretaker, adding that he has even had students coming from other provinces.

Khun Charon tells me the show is performed by 20 students aged from eight to 20 and scored by ten musicians who play the traditional Wong Pi ensemble of instruments. No one involved in the show is paid, but they get together at least once a week to practice and learn, there are five apprentices being prepared to take the oldest performers’ slots.

Shadow puppetry was once popular throughout Asia, known even in the Middle East as far as Egypt and around ancient Mediterranean civilizations. In Thailand performances of the shadow play drama may go back to the Sukhothai era (13th century) and are well documented from the Ayutthaya dynasty beginning in the 15th Century.

ABOVE: Inside the Wat Kanon museum.

Throughout the Rattanokosin dynasty (the current monarchy), Nang Yai shadow plays were one of the most popular forms of entertainment. Shows were presented everywhere from temple fairs to palace courtyards. The performances were a favorite of King Rama II who expanded the royal collection throughout the mid 18th century until a fire in the national theater destroyed most of the puppets. The fire seemed to coincide with a shift in the public’s taste.

Only a few decades later during the rule of King Chulalongkorn, Thailand’s great reformer, Nang Yai performances were reduced to only two places in the country: Singburi and Wat Kanon in Ratchaburi – a precipitous fall from their former glory.

The unique collection at Wat Kanon can be attributed to one man, the Reverend Sutthasunthorn; he enlisted local craftsmen to enlarge the puppets from their original size of about 20 inches to 60 inches and larger, allowing the performance to open up in into larger spaces and play to bigger audiences. By the time of his death in 1942 at the age of 95, the Sutthasunthorn collection numbered 330 puppets used to perform different tales derived from the Ramakien.

ABOVE: During the day, shows are sometimes performed with backs to the crowd so that visitors can see the full color of the puppets and the acrobatics of the dancers.

In 1989 Princess Maha Chakri Sirindhorn decreed that the original puppets be conserved and replacements be made at Silapakorn University for use in the theater. Six years later the replacements were presented to the Princess at the national theater and the originals went on permanent display at Watt Kannon.

What were once hours-long performances of the entire Ramakien epic that played out in the royal courtyards are now truncated 20- to 30-minute tasters, taking place in an air conditioned theater in front of a small audience. The volume of the orchestra and Thai narrator were cacophonous and the dancing chaotic. It’s impossible to truly appreciate this kind of show the way audiences would have a hundred years ago, before film, television, computers, and phones destroyed our attention spans. And yet there is still a draw. The old magic of the dancing puppets and cavorting actors holds.

The puppets were originally cut, carved, and punched from animal skins, usually cow (cows that had been killed by tigers according to Khun Charon), but some central figures required the skins of bears and even tigers. The silhouettes were then painted and had long handles attached for the actors to hold them high on stage.

Khun Charon also takes on the duty of conservator of the puppets, repairing them when necessary, and they do get beat up during the heated battle scenes of the performance when dancers use moves similar to Muay Thai. Repairs are made using monofilament and cyanoacrylate, which is fancy conservation speak for fishing line and super glue. Khun Charan didn’t have much time for me as a line of admirers and potential donors awaited his attention.

Wat Khanon has been awarded a UNESCO cultural award and a Kinaree award for the museum and temple grounds.

“This is one of a kind in Thailand today,” Kuhn Charon tells me. “When the performances finish here, I don’t know what will happen to the collection.”

The original shadow puppet collection is displayed in a warren of dimly-lit, interconnected teak buildings that were once the sleeping and eating quarters for resident monks. Today the labyrinth corridors of dark wood house simple light boxes where the leather puppets are mounted against white backgrounds. Strolling through the corridors some measure of the shows original drama held at Bangkok’s Grand Palace is captured. The dark of night, a stage lit by torches, the scents of joss sticks and garlands of flowers must have wafted among royal spectators who lounged about in glittery silks watching the drama in shadowy relief play out.

Riding out through the temples gate I’m aware of leaving half a millennium of tradition behind in a place that still thrives as a community center. Men and boys to one side are preparing longboats for an upcoming race on the Maeklong River, groups of women and girls practice a traditional dance beneath shade trees while monkeys and dogs wage the endless territorial skirmishes that are enacted in temples country wide.