Located in northern Sulawesi, a K-shaped island bordering Malaysian Borneo, Manado and the Bunaken Marine Park teem with life; almost 400 species of coral and 90 species of fish reside in the area, making for wonderful opportunities for diving and snorkeling. Within Bunaken are about 20 villages, home to 35,000 people - most of whom reside in the shadow of the volcanoes that dominate the island. With only about 10,000 international visitors a year, Manado and Bunaken are well off the beaten path, and a worthwhile destination.

Manadonese, or Minahasa, cuisine is famous for two things: first, the Manadonese cook almost anything, and second, their foods are the spiciest in the entire country. In addition, sugar is little used; instead, cooks prefer to add flavor through lemons and herbs. Also, as the population of the area is predominantly Christian, the Manadonese often cook pork, and marinate it in alcohol as well.

Opened in 1991 as one of the first Marine Parks in Indonesia, Bunaken measures five islands, and approximately 89,000 hectares (roughly 36,000 acres) of warm, tropical waters.

Trek to the Kali Waterfall, a roaring cascade of water that shoots over jungle cliffs. Over the river is a neat little bridge, which offers an excellent vantage point from which to take pictures, or simply admire the beauty of the falls.

First established in 1919, Tangkoko Park has seen some several additions over the years, and is now home to hundreds of birds, reptiles, mammals, and amphibians; notable creatures include the Tarsius monkey, which at 3 inches, or 10 centimeters, is the second tiniest monkey in the world.

A charming little town, Tomohon is surrounded by a troika of active volcanoes. Due to its higher elevation, Tomohon enjoys a cooler temperature than the rest of Sulawesi - and offers a variety of pleasant walking and hiking activities, including art galleries, waterfalls, and traditional markets.

Within Manado are just under 400 species of coral, about seven times more than Hawaii; in addition, of all the species of fish in both the Indian and Pacific Oceans, 70 percent can be found in the confines of the park.

Mount Lokon, Mount Masarang and Mount Mahawu are all within a half hour of Manado. The Mount Mahawu Volcano Trek involves a one hour hike to the edge of the volcano’s crater edge. From this vantage point, trekkers will be able to see the Manado Tua and Bunaken Islands. The bottom of the crater features a steaming lake of sulfur-laced water. 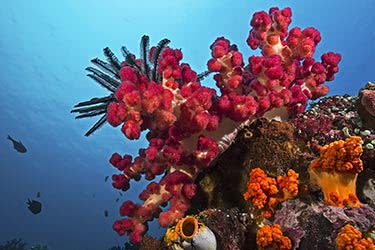 Discover the world-renowned dive sites around the northern tip of gorgeous and naturally diverse Sulawesi. On this week-long adventure, you’ll discover the “critters” who dwell in the Lembeh strait and the exotic marine life around Siladen island, off Manado. Prepare for a diving holiday like no other. 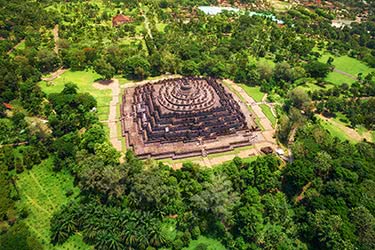 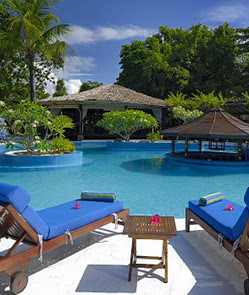 Located on the eponymous lush, tropical island within the confines of Bunaken National Marine Park, the Siladen Resort faces the spectacular Manado volcano. This eco-friendly, responsible resort features sixteen villas with either beach or garden views, all of which come with king-size beds, open-air bathrooms, air conditioning, satellite television, a fully-stocked minibar, in-room safe, tea and coffee maker, and hairdryer. Guests may dine at an open-air pavilion serving Indonesian, Asian, and Mediterranean specialties, or sample barbecued foods at the beach. Amenities include a saltwater swimming pool with a swim-up bar, a beach bar, and a boutique selling batik, or wax dyed cloth, postcards, and other souvenirs. The resort lies approximately ninety minutes by car and speedboat from Manado’s airport, depending on weather conditions.

Get down in the muck in Lembeh for the best muck diving in the world; cruise the bottom of the Lembeh Strait and beyond for otherworldly creatures.

With new flights from Makassar to Palopo, it’s time for travelers interested in the strange to try Torajaland, a world funerals, sacrifices, and a culture like nowhere else in Southeast Asia.