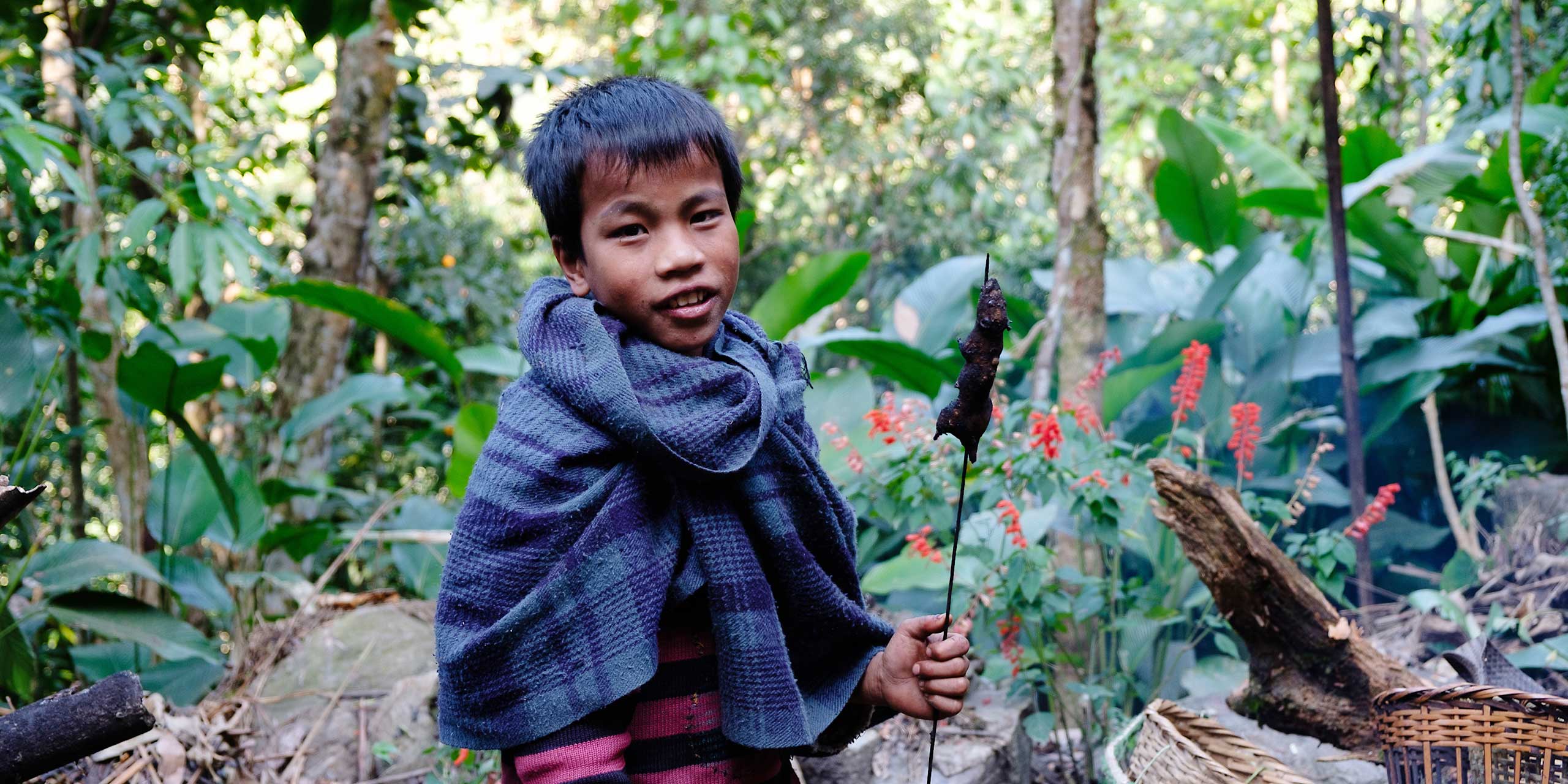 Darmasisus walks strongly, never looking down and never tripping. Meanwhile, I am picking my way carefully over the roots littering the path, struggling in the half-light. The narrow trail wraps around the hill-side, one of the many rippling down to the hazy horizon of Bangladesh. Bursts of song and high-pitched wails are bouncing off the vertiginous valley sides. Another warble floats up from the jungle below and Darmasisus Ram, my shoeless guide, stops. “Hear that?” he chuckles. “Someone is late home.”

Deep in the East Khasi Hills of Meghalaya, a state in India’s untamed North East, is a cluster of villages where every person can be identified by their own unique song. Each child is given a set of songs at birth: a short song that is used around the house, and a much longer version, lasting up to 30 seconds, which is used for calling in the village and beyond. I am in the village of Kongthong, part of the Khatar Shnong, a group of around 50 villages where this singing was once practiced. Of these, only 23 still continue this tradition today.

I have journeyed to Kongthong, rather uncomfortably, from the state capital of Shillong with at least three competing sets of music being inflicted on the passengers. South of Shillong, the East Khasi hills are the first obstruction to the warm air of Bangladesh, inciting a violent monsoon in the summer months. As a result the area is characterised by a smothering of ancient forests, unforgiving slopes and brutal waterways. Vertiginous pathways criss-cross the hills, originating as routes to the market places of northern Bangladesh, in a time before international borders.

It is early evening and these paths are still the main way to reach many villages, unconnected by road. Several tartan-clad groups pass us on the trails, some balancing the straps of bulging rice sacks across their forehead.  Some smell of rice wine, all are chewing the locally grown betel nut, a mild stimulant which leaves teeth red and rotting. As the sun sets we pass two men lounging by the path next to a warming fire; two huge shot-guns are leaning against a tree.

It is likely the extreme topography of the region led to song being used as a way of communication. Song carries long distances, aided by the natural echo chamber of the plunging valleys. Indeed, this is a phenomenon seen across the globe, from the Canary Islands to the rice-fields of Southern China. Over 70 ‘whistling languages’ have been documented, the vast majority in extremely mountainous areas. As I heave myself up the last few stone steps into Kongthong, I reflect on the efficiency of the invention.

Locals however, have other explanations. On this chilly December evening, I sit huddled among Darmasisus’ family around the kitchen fire. His wife is explaining how she picked songs for her 6 children, and is reciting them one by one. “A baby gets a song before a name,” she says. “The tune comes from the heart, it symbolises our love for the child. By the time they are three months they answer to their song.”

During the British rule of India, many Khasis were converted to Christianity by Welsh Presbyterians. But before this they practised an indigenous religion, rooted in nature and ancestor worship. The Khasis believed, and many still do, that they are surrounded by spirits which live in the rivers, forests and hills. Khasi villages traditionally have a ‘sacred forest’ nearby, which is actively preserved as a home for the spirits. Nothing living is ever taken from the forest for fear of unleashing their anger. “If they [the spirits] hear someone’s name called out, they will make that person fall ill,” Darmasisus explains. “The song is a way of protection. It is an act of love.”

The nearby village of Wakhen is another of the Khatar Shnong where they continue to name their children in song. It is one of the last remaining outposts of the animist religion where, similar to the ancient Greeks, omens are found in the intestines of sacrificed fowl. The village can be seen across the valley from Kongthong, but the walk there illustrates caveats in the term ‘nearby’ in the Khasi hills. In only half an hour, we plunge several hundred metres, arriving at Darmasisus’ honey and betel farm deep in the jungle. Here, he spends days working, sleeping and chewing betel, and can still be summoned in song by his wife at home.

Needless to say, Wakhen is at the end of a relentless ascent. All the houses are marked with red flags bearing black roosters, the symbol of the old religion, believed to be the mediator between man and God. As we sit around a fire in a village garden, songs are flying between people nearby, often answered by an ‘Oi’, or yes in Khasi. Darmasisus, whose love of story-telling is becoming apparent, explains it is believed the use of song started here in Wakhen. His local friend, Satow Tynsong, whose garden we are in, nods vehemently. “A hunting kill is also communicated to the rest of the village through song, in fact, there is a different song for each animal. And, of course, it is used for romancing,” Satow winks.

India | Tribal, Off The Grid

Flight of the Hornbill: India’s Northeast by Helicopter

Just as I think there cannot possibly be anymore climbing, Darmasisus insists on leading me to the top of a small hillock, above the village. Here he lowers his voice. “Only certain people can talk to the gods. It is dangerous,“ he whispers. “When an illness or misfortune happens to the village, they, the Khasi priests, smash eggs and read the yolks. Sometimes they read the intestines of roosters. Through this they can communicate with the spirits and ask what will make them happy. All we normal people can do, is to protect our children as best we can. That’s why we sing.”

We look down over the darkening village. Lights are flickering on and smoke is spiralling vertically in the still evening air. Tunes emanate from all corners of the village and children scamper up the steep slopes to home. Another tune floats up and Satow rises. “Right, that’s the call for dinner,” he grins.