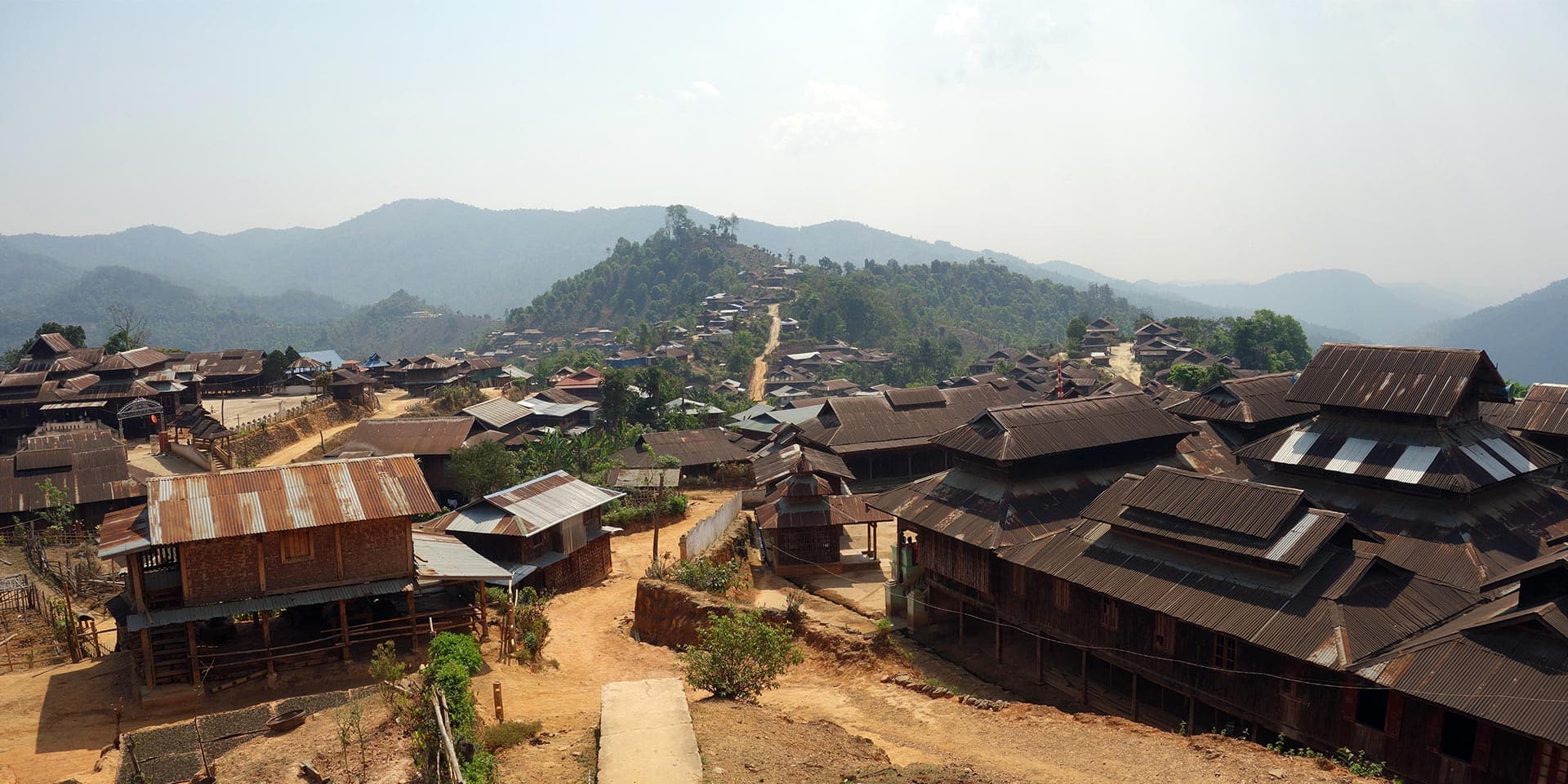 “Yes, it’s very complicated,” O’Maung, our local Palaung guide, says with a laugh as our group stares back at him trying to keep up with his intriguing and colorful tales of the ethnic groups of Northern Myanmar. Over the course of the day’s hike we would become accustomed to the many cultural and political divisions in the region, and we certainly didn’t doubt the complexity.

“There are more than 135 different ethnic groups in Myanmar, all with different cultures and languages,” O’Maung says. However, on the two-day trek into the hills around Hsipaw in Northern Shan State, we were immersed with just one group, the Palaung tribe.

ABOVE: Our guide, Omo, in the dry fields.

The Palaung are one of the oldest hill tribes in Southeast Asia, living in the forested hills of Myanmar’s Shan State, close to the Thai and Chinese borders. They are traditionally tea cultivators and still reside predominantly in villages dotting the slopes above 1,500 meters, the ideal elevation for growing tea.

The base to exploring the Palaung villages is a town called Hsipaw, 200 kilometers northeast of Mandalay. Although a picturesque town itself with surrounding waterfalls and farmlands, travelers trickle into town with plans to explore the nearby hill areas on foot. It’s a place not quite firmly on the well-travelled circuit yet in Myanmar.

Setting off from Hsipaw following O’Maung, or Omo which he said was easier to pronounce, in his army boots, bamboo, conical hat, and wide-leg, fisherman pants. The rice cultivation season was long over, and the fields around the town had turned dry and dusty. The remaining straw, stripped of all rice hulls, was left in large piles scattered across the fields waiting to be lit up into bonfires that left a blanket of haze across the town.

ABOVE: Village in Northern Myanmar.

Much of the lowlands have been converted to farms, and as we passed rows of winter vegetables such as beans, eggplants, and mustard leaves, farmers stopped, lifted their heads from their work and waved as we passed.

As we began to climb the hills away from Hsipaw, the air became clearer and the view over the farms and town behind us improved.

We stopped for a break with a view of the rolling hills behind us and Omo began to tell us a story. He was kidnapped when he was young, along with his friend when they declined to join a local militia army. His father was the village chief at the time and was able to muster five buffalos to trade for his son’s freedom, a large price for farmers.

Many proud and prominent ethnic groups in Myanmar, including the Palaung tribe, boast armed wings that have been fighting the government since the 1960s. At the height of the conflict, the various militias across the Northern region, including the Palaung army, ran on forced conscription, stolen food, and control over the lucrative opium trade operating across international borders. Omo recalled that when he was young, groups of armed men would often come into his village and demand food and money from the people before disappearing back into the forest.

ABOVE: Village life along the Dokthawaddy River.

A national peace agreement with all armed groups has been ongoing for decades and although peace has now largely prevailed in much of Shan State, the Palaung army has repeatedly rejected the ceasefire. However, Omo reassured us that the group has largely scattered far into the hills since the landmark elections in 2010 and the Palaung people really just want peace. As for the opium trade, that is still a lucrative business for many in the far northern regions of the country but only tea leaves can now be found growing in the hills around Hsipaw.

Despite a history of conflict, Omo looked fondly upon his home region in the hills as a sort of oasis, an escape from life in the bustling townships. During the decades of military rule when the very act of listening to the radio wasn’t permitted, the Palaung villages high in the Shan hills were far from the junta’s reach and enjoyed much more freedom. Omo recalled hearing the sound of the radio often in his village and when he would return to school in town his classmates would ask him eagerly about news from the outside world.

ABOVE: Palaung woman with kid poses for the camera outside Hsipaw.

Although international news stations can now be heard freely in local shops, the Palaung villages still offer a refuge of sorts, at least from the traffic, fumes and luxuries such as phone reception found in town. By late afternoon, we had arrived in our haven for the night and Omo’s home village, Pankam.

The village showcased a simple life, perhaps one that villages in Europe may have enjoyed centuries before. The houses were made from teak wood with a corrugated iron roof that had recently replaced the more traditional thatch. The houses were uniquely built high on crooked stilts, as if anticipating frequent flooding. However, it instead allowed for extra storage and a place for the family buffalo to sleep underneath.

The Palaung people still spoke their traditional language at home and learnt both Burmese and English in school. So instead of the usual ‘Mingalarbar’ that we had come accustomed to hearing on the streets in Myanmar, it was ‘Jam-sa’ that was shyly said by the locals walking by.

We met Omo’s father, now well into his old age, and confined to sitting in the family kitchen and joining in the chatter rather than much of the backbreaking work in the tea fields. His weathered face and tired eyes suggested that he would have lived through some very interesting and tumultuous times but can now enjoy the relative peace that has extended into the hills.

ABOVE: A family in a Pankam village.

The women cooked over an open fire in the center of a large room with just a small vent in the roof to allow the smoke to escape. The Palaung eat a largely plant-based diet, consuming just what they and their neighbors grow in their fields. Chickpeas, pumpkin, mustard greens and eggplant were all ingredients waiting to be cooked into a stew to warm everyone in the chilly winter air.

The fog rolled over the hills early the next morning and rain trickled down onto the tin rooves, an unusual sight and sound during the cold, dry winter. We sipped on another cup of green tea to start the day before taking the now wet and muddy trail back down below the clouds to Hsipaw.

It had only been a small glimpse at life in Northern Shan State and yet our guide’s stories had opened our eyes to the complexities of Myanmar’s ethnic makeup and history. Such stories of militias, kidnapping and opium fueled conflict may seem more suitable for a Hollywood film, however, Omo reminded us that it was very much their reality not so long ago.