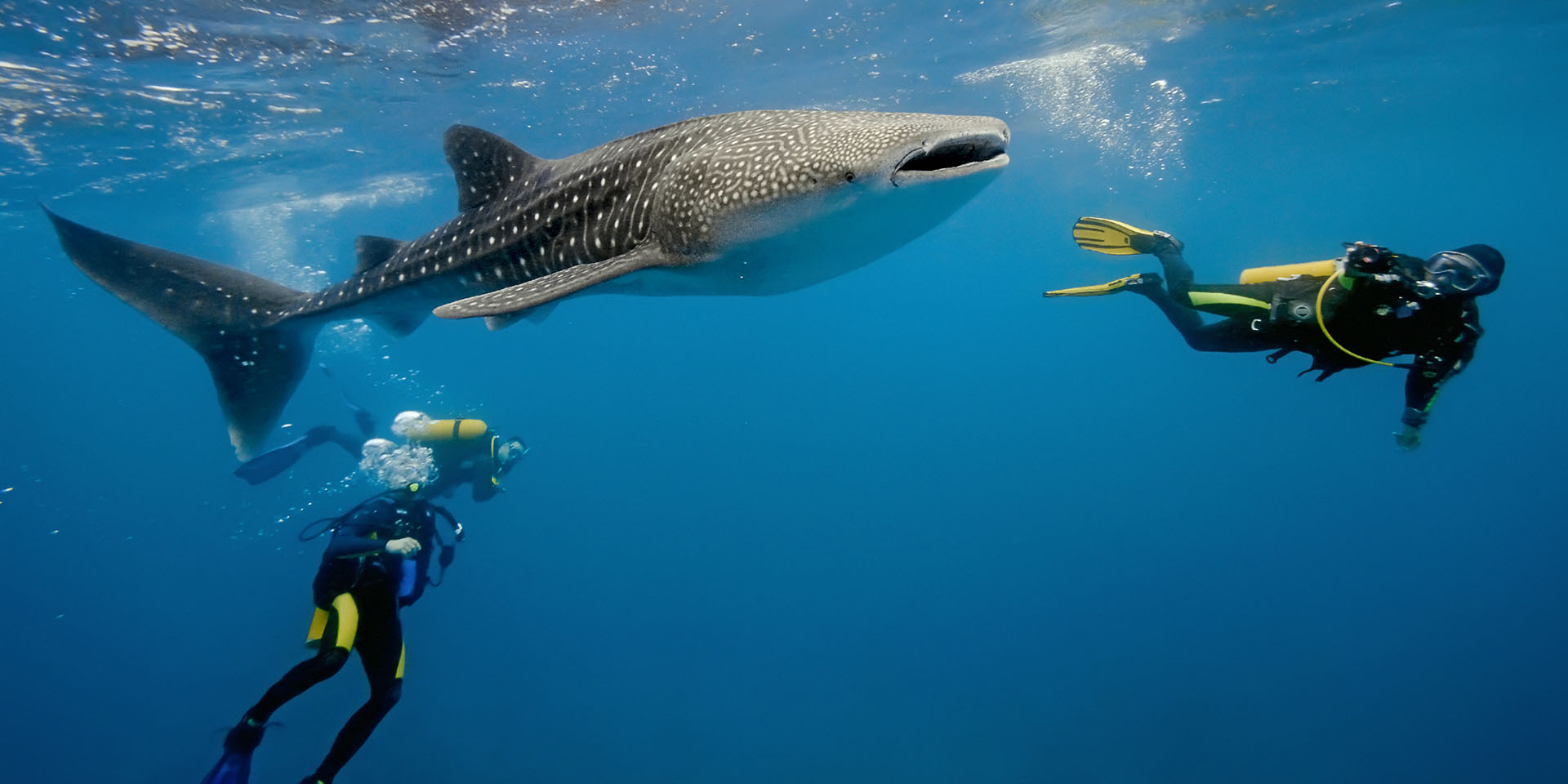 The biggest fish on the planet, genial monsters of the deep blue sea lazing in cool open waters – and, to a very special few, whale sharks are dive buddies.

To swim alone with these delicate beasts in their native habitat is one of the most prized encounters a diver might have, and they are willing to go to the ends of the earth to get their chance.

This is what takes Jason Friedman to Raja Ampat.

“Part of the joy of seeing whale sharks is the journey. In other places, you might have 500 other people in the water and lots of restrictions. One of the great pleasures in such a remote area is the lack of rules. This is the joy of it all.” Jason, a keen whale shark enthusiast, tells Travelogues. No one else in the water, no boats, few people anywhere. I still try to go […] to Raja Ampat once a year.”

On the rare occasions these gentle beasts are encountered in the wild, they treat their guests from the world above with care and gentility. Weighing in at around 40,000 pounds, the distinctive pattern of spots and stripes on each shark are unique – and who could deny the innate charm of a fish with freckles.

ABOVE: The waters of Cenderawasih Bay are remote and filled with tropical life of every description

Jason saw his first whale sharks after 25 years of diving at Hanifaru lagoon in the Maldives, but was disappointed by the boats and crowds. “So, when we were on a trip in Raja Ampat we asked the operator when the next trip to Cenderawasih Bay was and they said two years. We said, there and then, ‘we’ll have it now.’”

The Cenderawasih Bay is an incredibly remote region, frequented by very few boats. It is not the easiest location to find; most travelers take a full day of travel from Bangkok followed by three days sailing to get there – that is, if you can find a boat captain willing to take you. “We went on the liveaboard Damai. It’s really the best one. It mixes comfort and great dive guides – you have to have good guides – who are all locals.”

To go along with its reputation for friendliness, the whale shark can be distinguished by its rather idiosyncratic smile. The whale shark’s five-foot wide mouth is crammed with up to 350 rows of small pearly whites, but unlike the razor sharp dentures of its more bloodthirsty cousin, the teeth of this dappled behemoth, a plankton filter feeder, are tiny and play no real part in feeding.

ABOVE: Diving alone with whale sharks in deep blue waters of Cenderawasih Bay

Snorkeling or diving, you can spend hours and hours getting pushed and bumped around and you soon feel like part of the pack

The slow, seemingly lethargic movements of the creature cut an elegant silhouette as it vacuums up plankton in the warmer conditions of its preferred domain – the pelagic zone, a mid-depth environment that isn’t too close to the shore). “An encounter in the wild is normally a ‘swim through’ as they are pelagic. [You] can’t dive ‘with’ them, and there will be restrictions on how close you can get, but they are always moving. Here, in the bay, they hang out under the bagans (traditional Indonesian fishing platforms) all day long. Snorkeling or diving, you can spend hours and hours getting pushed and bumped around and you soon feel like part of the pack,” Jason says.

“It’s not like a normal dive. The whale sharks are just there hanging out,”  Jason tells Travelogues, pointing out that they bought some fish from the boat captain which was then minced and chummed in the water. “For a couple of hours, the sharks all come over and hang out and eat fish guts. On one occasion I was the only person in the water, with seven of them for about one and a half hours – it was a surreal experience – them playing in the water, like big puppies.”

Diving with whale sharks is not just a singular personal experience; it also contributes to the conservation of the species. “I was a biologist, a conservationist, and an environmentalist, those whale sharks will stay alive because we go down to see them and the fishermen on the bagans make extra money. The fish are worth more alive than in soup. We’re humans and as such, we’re part of nature; we’re going to interact, the question is how?”

ABOVE: A diver among the diverse fauna of the Cenderawasih Bay National Park

Aside from diving, Cenderawasih Bay is the location of the Teluk Cenderawasih National Park where, along with the fascinating coastal regions and coral reefs, you can also find mangroves and tropical forest ecosystems. Home to a myriad of different flora and fauna including four different species of turtle, the area has so much to offer divers and non-divers alike.

This epic journey, once open to only the most intrepid of travelers, is getting closer each day. Whale sharks are just one of the wonders of the Cenderawasih National Park, and, as long as travelers swim with care and attention, these smiling, freckled beasts will keep returning to wow generations of visitors.