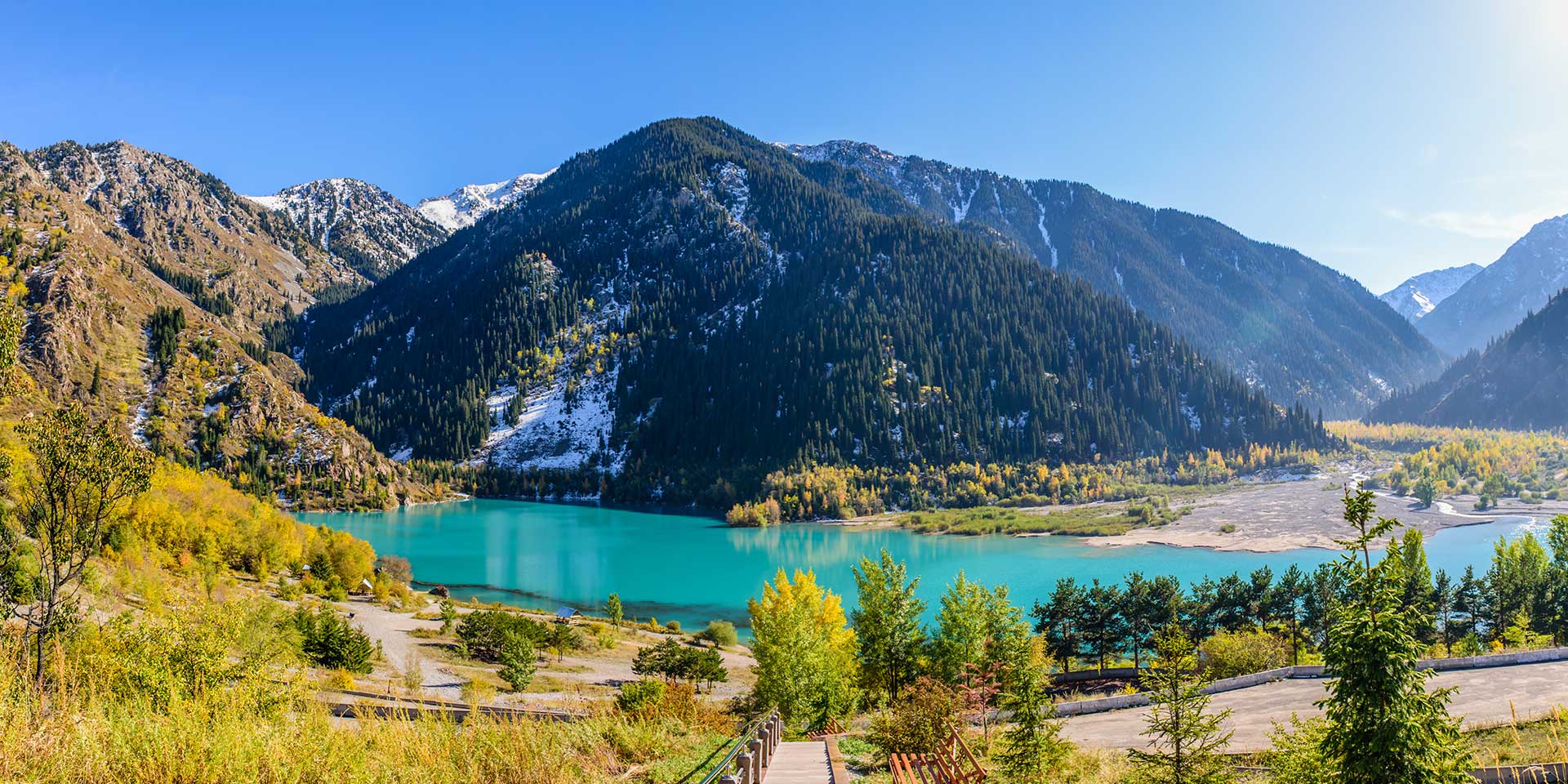 For intrepid explorers looking for rugged scenery, unchartered waters, adventure, thrills and spills, there is no better place to go off the grid and into the wild than on the diverse terrains of fascinating Kazakhstan. An unsung hero of central Asia, its rarely-trodden trails are packed with opportunities for exploration and discovery. From historic cities to mountainous hiking trails, not to mention opportunities for skiing, fishing and watersports, the vast sprawl of this all-encompassing country presents the perfect excuse to get the gang together and head off the beaten path for an unforgettable journey.

If you are in search of maritime pursuits, head west to the Caspian sea; the largest landlocked body of water in the world offers countless activities for the nautically-minded. Bustling Aktau boasts busy beaches where you can play a few games of volleyball and relax with beers and a barbecue. From here, explore the surrounding province of Mangystau, whose waters are ideal for windsurfing, waterskiing and parasailing. Those angling for a few leisurely days with a rod in hand will enjoy trawling the waters for submarine catches including Caspian bream, Caspian salmon and the sturgeon whose coveted eggs are used to make caviar. Rent your own fishing boat or join a fishing tour and search the depths as rare birds fly overhead. With coasts that touch Iran, Azerbaijan, Turkmenistan and Russia, the Caspian Sea is an epicenter of travel by ferry, and sailing is a popular pursuit. Head onwards to ports beyond borders or simply charter a catamaran from Aktau for a day exploring the Kazakh waters.

If you prefer your exploits to take place on terra firma, hit the hikes and treks of Kazakhstan’s mountains and valleys. From Zhezkazgan, a city located on the reservoir of the Kara-Kengir River, plunge into Zangyr-tas, where you will discover ancient petroglyphs of Bronze Age animals. From there, you can make the trek to the quaint Ulytau village, the gateway to Auliye mountain. The hikes here take you down into gorges or up over peaks, past ancient grave sites, through cave systems and down into the Tamdy river valley where you’ll find yet more remnants of the Bronze Age. The city of Shymkent is a great place from which to explore the Aksu canyon and hike down into to Sairam Ugam National Park to discover the “Valley of a Thousand Eyes”, set with rocky caves that seem to watch you as you trek. Walk through Charyn Canyon, second in size only to the Grand Canyon, and head into Altyn-Emel National Park, overlooked by the deserted mountains of Katutau. From Almaty in the southeast, you can trek into the Tien Shan mountains. Here, spend nights camping in the wild at the bottom of the Turgen Gorge and trek up to Assy Plateau to see how the nomads spend their summer days on the grassy highlands. Elevated just over one mile above sea level, meanwhile, the Kolsai lakes are breathtakingly scenic and surrounded by mountain trails that you can navigate on foot or gallop across on horseback.

Though not strictly adhering to the notion of “getting off the grid”, Kazakhstan’s fascinating cities are usually an obligatory entry or exit point and offer the chance to soak up a little culture as well as enjoy a night or two on the town. Pay a visit to Astana’s notable buildings, the Museum of the First President and the Temple of Peace and Accord. Then, get together for a memorable dinner in the revolving restaurant on the 23rd floor of the Solaxe Hotel for panoramic views across the capital before hitting its large entertainment complex.

Not least for its proximity to excellent hiking trails, the former capital of Almaty is an unmissable stop. Once a crucial point on the historic silk road, it has been destroyed and rebuilt twice. The largest and busiest city in the country, it was the first place to announce the fall of the USSR and now boasts a distinctly European feel with green parks and squares. Kick off or finish up a big trip with a stay in the superb five-star Ritz Carlton Almaty. Overlooking the soaring peaks of the Ile-Alatau mountains to the south and the city to the north, the hotel lies between all the urban action and a plethora of outward-bound adventures. Take a tour of the city’s sights: see the monument of independence, stroll the streets and sample the local fare at the Green bazaar. Architecture enthusiasts will appreciate the Russian orthodox cathedral, which is built entirely of wood, the Soviet-style opera house and the museum of Russian folk music, which is home to almost unrecognizable musical instruments.

Situated at the base of the Tien Shan Mountains, the scenery surrounding Almaty is stunning – scored with gorges and peaked with snow-capped mountains. While summer attracts hikers and walkers, winter lures snow-sportsmen. The cable lift at Medeo gorge takes you up to two miles’ elevation for excellent runs – fluffy with fresh powder – at Shymbulak ski resort, where the sun is almost always at your back.