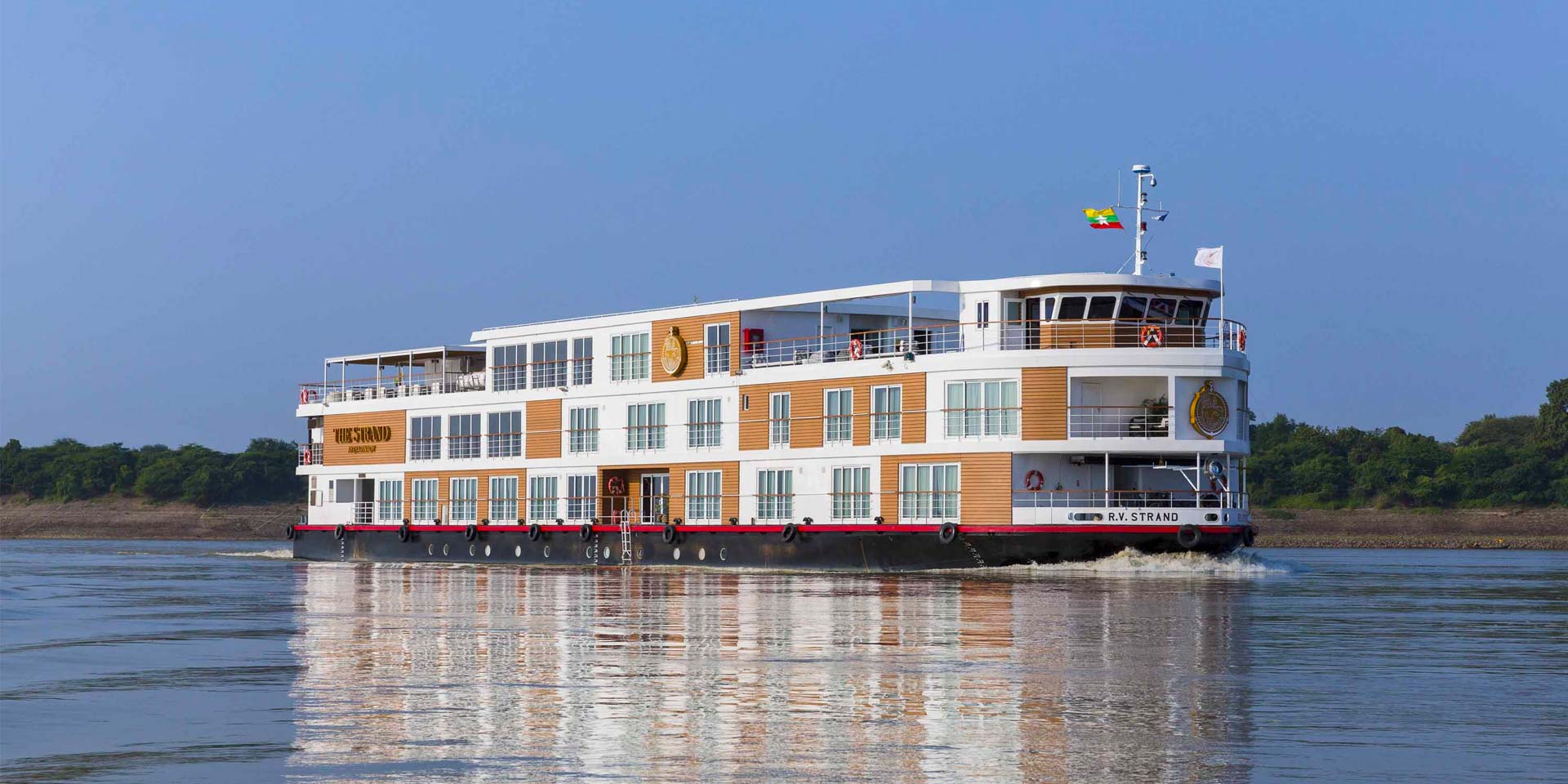 In Southeast Asia, Myanmar has more colonial-era heritage left standing than any other nation – architectural relics that come in the form of Victorian-era buildings, clock towers, and golf courses. The British also introduced a new form of transport: the paddle steamer, as adept at ferrying cargo as it was for transporting leisure travelers upriver at a gentle clip.

The last such vessel plied the country’s waters in the 1940s, but a number of companies are carrying on this legacy with new boats based on those old models, which are also equipped with far superior safety measures. These are not mass-market cruises with hundreds of people onboard, but much smaller, friendlier and more intimate voyages with only a few dozen guests.

The oldest colonial-era hotel launched its own luxurious cruises of the Ayeyarwady River (sometimes referred to as the Irrawaddy River) in 2016. The vessels look like traditional riverboats but they’re outfitted with all the amenities any discerning luxury traveler could ask for, including a spa and wellness center.

These well-appointed cabins will be your floating home on itineraries that range from two to four nights. The three-night cruise from Mandalay to Bagan begins with a tour of the U-Bein Bridge, the longest and oldest teak wood bridge in the world, before moving on to explore some of the area’s most scenic and historic monasteries and pagodas.

The second morning begins with a horse-cart journey to explore the ruins of the royal dynasty of Ava, which ran from the 14th to the 19th century.

ABOVE: The Strand Restaurant.

Back on board, an Asian-style lunch is the order of the afternoon as the boat wends its way towards Bagan while guests can soak up the scenery, chill out by the pool, or watch performances of local music and dance. To cap off the day guests can enjoy a sundowner on the deck and dinner in the boat’s Strand Restaurant.

ABOVE: Pandaw on the Chindwin River.

This company has built up an enviable portfolio of rivers cruises throughout Laos, China, Vietnam, and Thailand, but their maiden voyage was in Myanmar, which set the high water mark for all their future forays. This is also the place where their boats, all done up with teak and brass, were constructed, based on 19th century designs.

From a scant four nights to a full two weeks, Pandaw offers a number of different cruises to launch deeper or shallower explorations of the country. In between these two extremes you could opt for the seven-night “Voyage to Nagaland,” a remote area in the north renowned for its patchwork quilt of ethnic villages, soaring cliffs and Naga tribesmen, whose elders still bear facial tattoos from the long-gone days of headhunting.

For another backwater adventure try the seven-night tour of the Chindwin River, the Ayeyarwady’s main tributary, which begins in the picturesque Hukawng Valley in Kachin State. As the cruise begins a tapestry of daily life unfolds, with villages, fishermen and pagodas materializing out of the distance in an unsullied place where few foreigners venture.

ABOVE: The Amara from Bagan to Mandalay.

This stylish resort, composed of two geographically specific locales, the Amara Mountain and Amara Ocean, also has two 100-foot long riverboats. Each of the capacious cabins has en-suite bathrooms and, thanks to the nearly silent generators, 24-hour electricity. The Amara 1 has seven cabins that can hold up to 14 passengers, while the Amara II has five cabins.

The four-day/three-night journey from Bagan to Mandalay begins with visits to both the biggest bell in the world and the largest unfinished pagoda. From there it’s onwards to the 14th-century Shan capital of Sagain, where hundreds of pagodas attest to the undiminished piety of the Myanmar peoples.

The weeklong cruise from Mandalay to Bhamo may leave some visitors feeling “templed out,” but there are plenty of detours to explore a pottery carving village, local markets, ethnic villages, rustic museums – and even a chance to spot some pods of Irrawaddy dolphins bobbing up and down in the frothy waves – to break the monotony.

The latter argosy is also a study in Nature Appreciation 101 in a country that boasts one of the most diverse topographies in Southeast Asia. The study peaks, quite literally, as the boat navigates the area close to Bhamo, near the Chinese border, where 300-metre-high cliffs bearded and crowned with rainforest elevate the awe factor.

ABOVE: Sunset on the Irrawaddy River from Anawrahta Cruises.

Named after a king who ruled centuries ago during the era of Bagan, Anawrahta’s boat is a visual déjà vu of the bygone paddle steamers. The barge-shaped vessel is huge – almost 65-meters long – and has three different decks, with only 23 cabins, which guarantees that vacationers will not come down with a case of cabin fever.

Each cabin, decorated with vivid fabrics and earthy hardwoods, comes with a private balcony. For those in search of more exorbitance and exclusivity there are Junior, Executive and Royal Suites. The latter boast private Jacuzzis.

Such cruises can be as physically relaxing as intellectually invigorating thanks to onboard lectures about the country’s turbulent history and ongoing rifts between different ethnic groups, embellished with demonstrations of folkloric arts and crafts in danger of dying out in the digital era.

The company’s most popular cruise takes visitors through the Irrawaddy River’s second defile, a narrow gorge endowed with memorable vistas. For historians and literary buffs, a particular high point of this trip is the chance to explore the town of Katha, where a young George Orwell was stationed as a British colonial policeman from 1922 to 1927. The town became the backdrop for his novel “Burmese Days,” which is still one of the most defining, expat-authored books about Southeast Asia.

Some of that past is still present in Myanmar, a nascent democracy handicapped by 40 years of recent military rule. Near the town is an elephant logging camp that looks much the same now as when Orwell lived there.