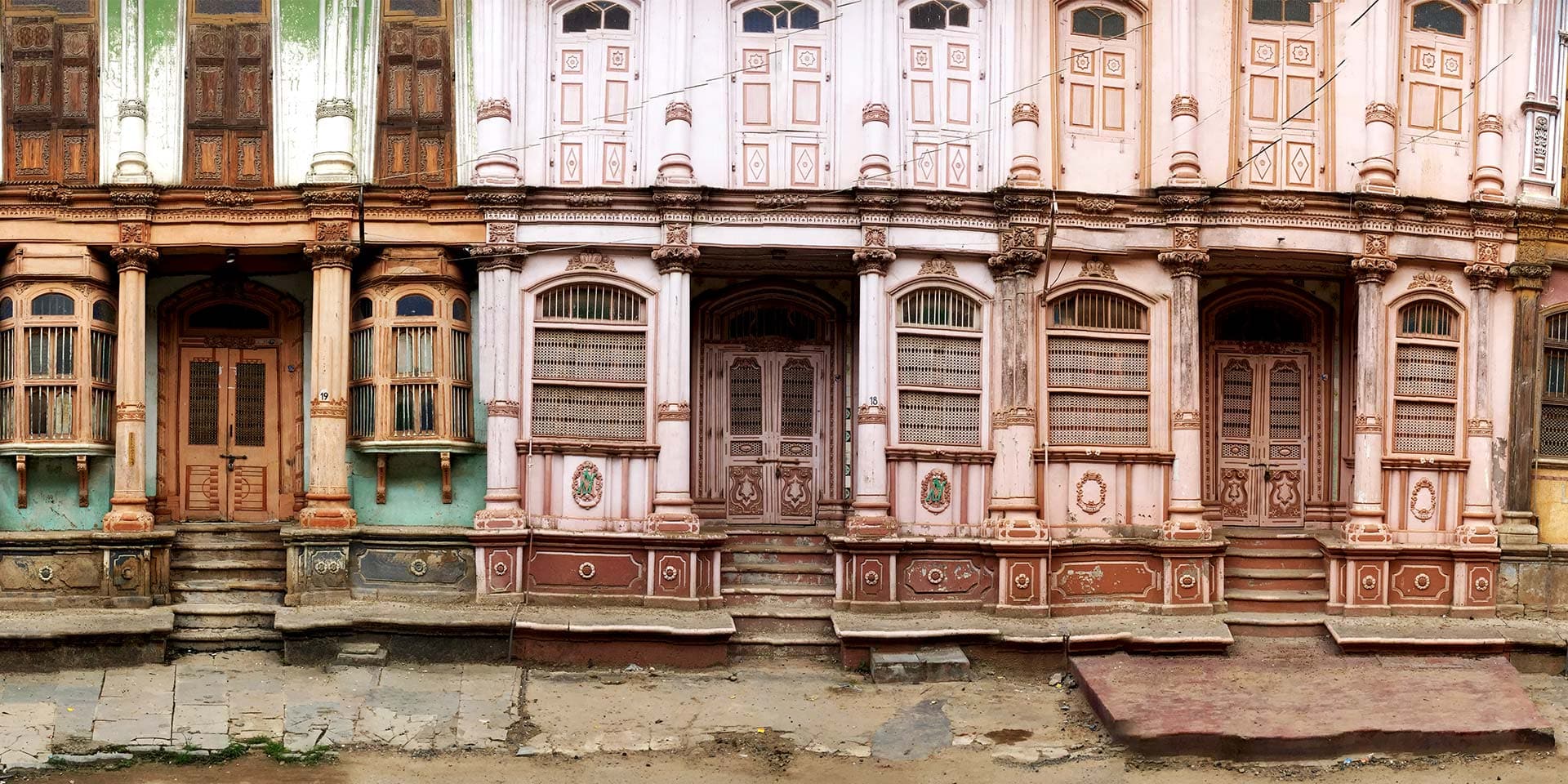 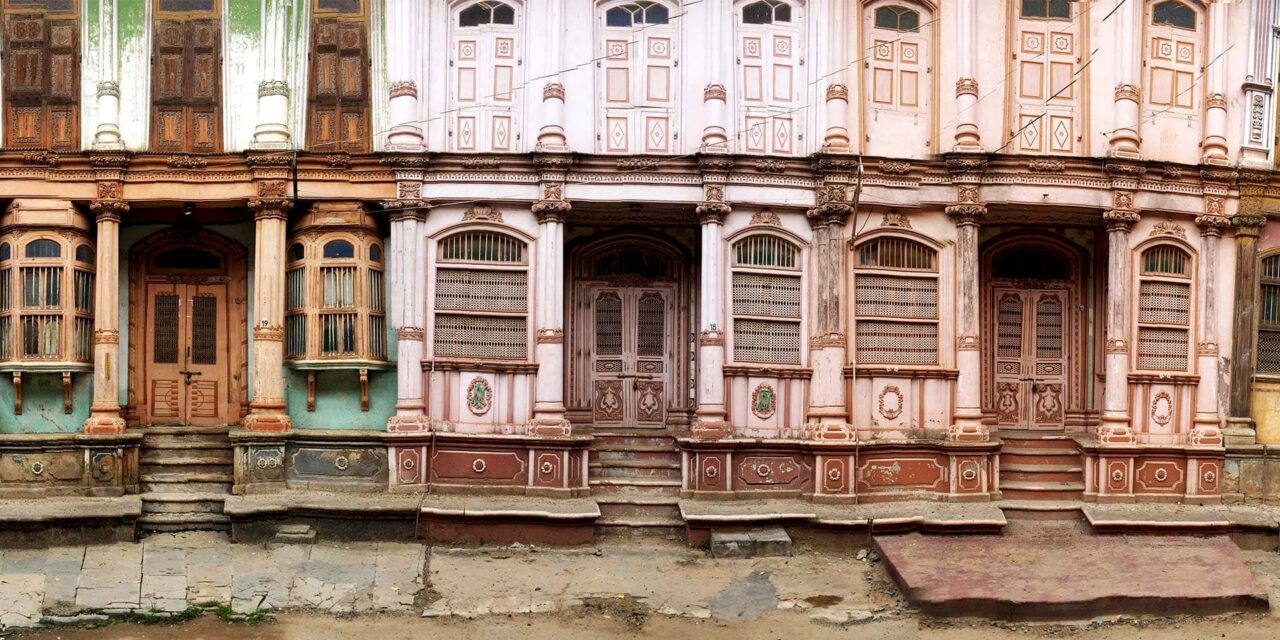 A sleepy little town in North Gujarat, Sidhpur, has a powerful place in history and mythology. It was here on the banks of the Saraswati River that the great warrior Parasurama performed the last rites of his mother, making Sidhpur a sacred pilgrimage among Hindu devotees honoring their maternal ancestors. For its special place in collective Hindu consciousness, Sidhpur has come to be known as the “Kashi (Varanasi) of the West.”

The town rose to prominence during the rule of the Solanki Dynasty when it became the capital of the state, named after the lauded king Siddhraj Jaisingh. But today the crowning glory of Sidhpur is the European-styled architecture built over a century ago in the Muslim neighborhood of Najampura.

This is the ancestral home of the Dawood Vohras, a prosperous trading community and a close-knit clan; they have significant presence in the cities of Mumbai, Ahmedabad, and Calcutta. As successful migrants to larger cities have often done, the non-resident Vohras built opulent mansions in their home town, Sidhpur.

The listless highway from Ahmedabad to Sidhpur cutting through the semi-arid countryside does not prepare travelers for the magic of Sidhpur. The new part of the town wears a drab and dusty look with its ubiquitous trading shops and dull houses. At a roadside sweetshop we stop for a break, where the elderly owner responds to our queries with a single word.

ABOVE: Through the window of a Sidhpur home.

Five minutes later, we exit the car into Vohrawad to a small street and look in amazement at the unbroken line of delicately ornamented wood-brick-and-plaster houses lining both sides of the street.

The houses are so similar in design and architecture that the facades look more like magnificently decorated walls flanking the street, protecting it from the scorching mid-morning sun. In the diffused shadow, the cool pastel shades of the century-old mansions look chimerical. It seems more as though we are walking in a Parisian back-alley than Gujarat.

With a more attentive inspection, the European influence in the architecture of Vohrawad becomes more evident with the gabled roofs, ornate banisters, pilasters, columns, and decorated doors and windows. The street plan also loosely resembles that of old urban neighborhoods of European cities: a well-planned grid organized around a main street that veers off into narrow side streets either terminating in blind alleys or looping back to rejoin the main thoroughfare.

But amid all the subtle splendor, we feel an overpowering sense of desolation. The streets are deserted, with only an occasional passerby here and there, casting a curious look at our motley group and smiling faintly before going off. Vohrawad, evidently, is not very used to visitors. I remember that just before we left Ahmedabad, the owner of our hotel had jokingly referred to Sidhpur as a ‘ghost town’.

Curiously, unkempt rubble is found throughout. At a street corner, we stare disapprovingly at a heap of debris, and our collective mutter of disappointment brings an elderly bearded man out of a finely carved wooden door – the main entrance to an exquisitely beautiful house.

ABOVE: Conversations in a Sidhpur home.

“Ours is a dry country, but we face occasional cloudbursts,” he says, introducing himself as Mir Asgar Ali. With an elaborate sweep of his frail hand, he adds, “These houses are quite vulnerable to torrential rains. Some parts break off and result in this rubble.”

Mir Asgar Ali politely invites us inside his home. As soon as the door closes behind us with a rusty creak, we are plunged in tobacco-colored semi darkness, moving back more than a century. If the facades are a testament to the intricate and symmetric architecture, the ornate interiors speak an intimate oriental language in its dainty motifs and designs.

The finely-carved wooden arcs and garlands on the rims of the verandah ceiling are a visual feast. Each wooden pillar holding the roof has been molded to form a curvy buckle.

While the flowers and the creeper are the prime motifs of the veranda, the balustrades form ornamental parapets of geometric designs. Synchronized with the archaic charm, the rosewood and mahogany furniture are preserved from a bygone era, with dark brown cabinets and cupboards, Belgian glass, exquisitely designed corner pieces, and four-posters with a quiet grandeur.

Alisaab explains the rise and fall of Vohrawad, his baritone gently reverberating in the large room where we are seated. Migration of the Dawoodi Vohra community in search of greener pastures began about 150 years ago, first-generation migrants. After setting up their trade in their adopted cities, they built most of Vohrawad’s majestic houses.

In some cases, sons built them with their father’s remittances. Family ties were strong and the merchants regularly visited their hometown and invested in it. With each generation, old ties to the native land weakened. The grand residences stand stolid but forlorn, as sad reminders of a forgotten ancestry.

“Now these houses are either in the hands of caretakers or people like us, relatives of the original owners,” Mir Asgar Ali says. We finish our tea and prepare to leave. As we bid farewell to our affable host, Alisaab shows us an adroitly carved monogram on the wall beside the front door, a whimsical extravagance of artistry with the letters H and K – the initials of the family name.

We retrace our steps through the grid-like maze of Vohrawad lanes, marveling for the last time at the subtle and architectural drama around us.