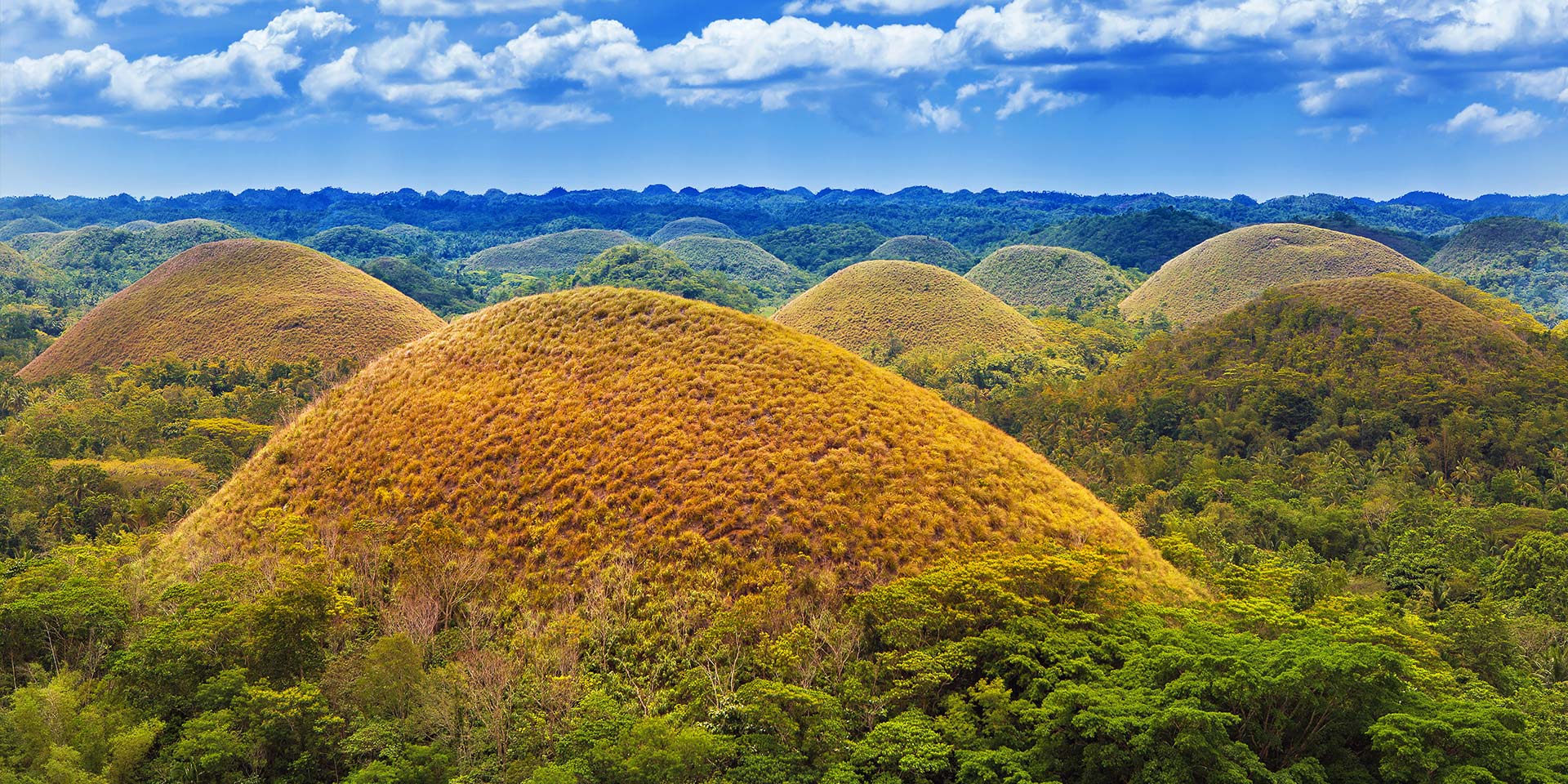 Most go for the nature and the jungle – some for the tarsiers or the butterflies – but Bohol is an indelible part of the history of the Philippines, from ancient blood compacts to the giants that created the Chocolate Hills. No trip to this island getaway is complete without a quick dive into its history.

Legends of the Chocolate Hills

ABOVE: The Chocolate Hills of Bohol.

As one of the Seven Natural Wonders of Asia, the province of Bohol’s Chocolate Hills are as mysterious as they are awe-inspiring. The actual origin of the domes is likely the formation of eroded limestone that once sat on the bottom of the ocean, but traditional folklore would have us believe that they are the stuff of giants.

One popular tale states that the grassy hills – which vary in size and measure up to about 390 feet in height – are the aftermath of a battle between ancient giants who hurled colossal boulders back and forth at one another. Another myth states that a giant’s lover died, causing him to shed tears for days on end until they mixed with the soil and formed the iconic hills.

A slightly more disgusting tale blames the hills on a giant water buffalo, who ate all the townspeople’s food; the locals baited the carabao with their spoiled food, causing it to be sick, leaving the water buffalo droppings, and, well, thus you have the famous Chocolate Hills. Some have speculated that the hills are the tombs of ancient rulers, but no evidence has ever been found for this.

ABOVE: Aerial photo of the Chocolate Hills, said in folklore to be the work of giants.

Whatever the history of the hills, they are either lush with green vegetation or a dry shade of brown, depending on the time of year. The hills are one of the more popular destinations in the Philippines, making them a must-visit for visitors to the island of Bohol. As there are an estimated 1,269 to 1,776 hills in total at the site, the area is often described by travelers visiting in the dry season as looking like thousands of chocolate truffles.

ABOVE: Sandugo statue in Bohol.

The concept of the Sandugo is derived from the word “Sandugo,” meaning “one blood” in Visayan. Today, travelers wishing to learn more about this momentous ceremony can visit the Blood Compact Shrine site on Bohol, near where it was originally performed. A marker plaque at the site offers more background on the Sandugo event and reads, “Each of the two leaders made a small cut into his arm, drew a few drops of blood from the incision, mixed it with wine, and drank the goblet containing the blood of the other. Thus was the first bond of friendship between Filipinos and Spaniards.”

The Sandugo has been endlessly reenacted, studied, and immortalized in the form of paintings and other works of art, including a monument that currently stands on Bohol in Tagbilaran City. It also appears in both the official flag and the provincial seal of the government on the island.

ABOVE: The Cathedral of San Jose.

Roman Catholic influence has led to a number of architecturally fascinating churches in the region. Two that travelers should not miss – the Cathedral of San Jose and Baclayon Church – are also as culturally significant as they are aesthetically appealing.

The Cathedral of San Jose is one of the first six parishes founded by the Jesuit missionaries in 1595. The original church has been razed and reconstructed several times over the centuries, but the cathedral is still in use today, meaning that visitors should be respectful of locals who may be worshipping inside. The parish’s setting is incredibly picturesque, as it is located in the center of Tagbilaran City’s plaza.

Located in the municipality of Baclayon on Bohol, Baclayon Church is another local religious site that visitors should add to their list. The church was declared a National Cultural Treasure by the National Museum of the Philippines, and despite being damaged by a 7.2 magnitude earthquake in 2013, exhaustive reconstruction efforts have since restored it to its former glory. The church’s interior is adorned with several ornate altars, or “retablos,” and the building faces the sea in a nod to the coral stones that were used in its construction.